What is the medicine "Kaffetin Cold"?The composition and characteristics of this drug will be discussed below. Also, we will tell you about how to take this medication and under what diseases it is prescribed. 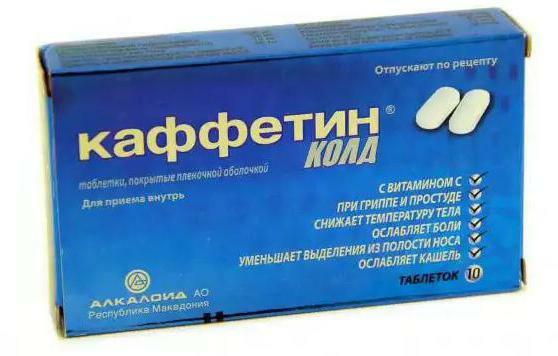 The drug "Kaffetin Cold" goes on sale in the form of tablets oblong and biconcave form( with a risk on one side), covered with a blue film shell. They are placed in a perforated blister, consisting of aluminum foil and a three-layer transparent film, which is in a cardboard bundle.

What does a medicine like "Kaffetin Cold" contain? The composition of this medication is as follows:

The film membrane of this medication is made of blue dye, macrogol, titanium dioxide, polyvinyl alcohol and talc.

Pharmacology of the preparation

What properties are characteristic for the "Kaffetin Cold" tablets? The instruction asserts that this agent is capable of exhibiting analgesic and antitussive properties. 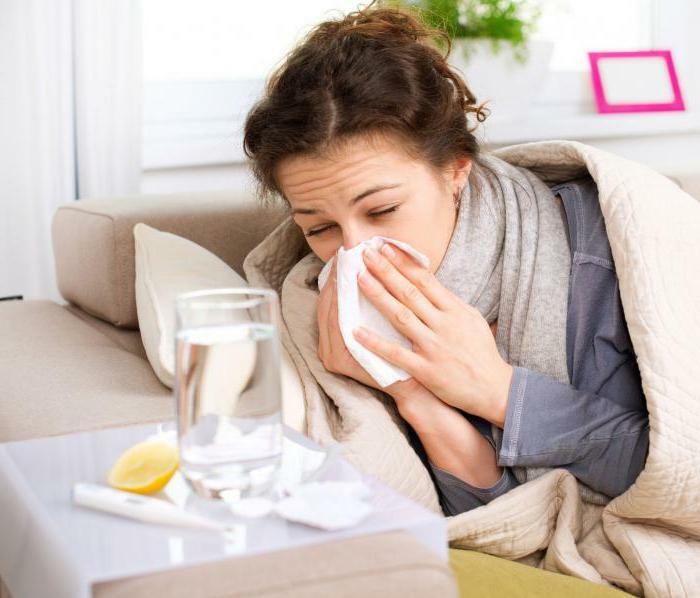 The mechanism of action of this drug is due to the presence in it of the above components. Let's consider their features right now:

A distinctive feature of this ingredient from NSAIDs is the complete absence of anti-inflammatory effect. Paracetamol does not irritate the mucosa of the gastrointestinal tract, nor does it affect the water-salt metabolism, since it does not have a negative effect on the synthesis of prostaglandins in peripheral tissues.

How does the absorption of the drug "Kaffetin Cold" occur? Experts' reviews indicate that the absorption of most paracetamol occurs in the small intestine. At the same time, its highest concentration in the blood plasma is observed within 30-90 minutes after oral administration. 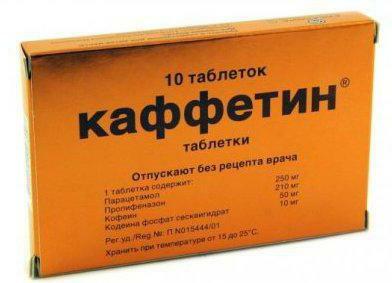 Metabolism of the substance in question( approximately 90-95%) occurs in the liver. As a result, inactive derivatives are formed( due to a conjugation reaction with glucuronic acid and sulfates).They can have a blocking effect on the enzyme systems of the liver, as well as provoke the death of their cells.

The half-life of this component from the human body is 1-4 hours. Paracetamol and its metabolites are excreted by the kidneys. In old age, there may be a decrease in the clearance of the drug, as well as an increase in half-life.

After dextromethorphan has entered the human body, it is almost immediately absorbed into the bloodstream. The highest concentration of this element in the plasma is observed 130 minutes after taking the tablets. This substance is metabolized in the liver. Its metabolites are excreted together with urine.

Pseudoephedrine is also rapidly absorbed into the systemic circulation after oral administration. The highest concentration of this substance in the plasma is reached after approximately 2 hours. The half-life of pseudoephedrine is about 6 hours. It is metabolized in the liver( partially), resulting in the formation of a derivative that is subsequently excreted from the body together with urine.

As for ascorbic acid, it is also absorbed from the digestive tract and quickly distributed to all tissues. This component is reversibly oxidized to dehydroxyascorbic acid. At the same time, some part of vitamin C, which has entered the body, is metabolized into an element called ascorbate-2-sulfate.

This substance is excreted in the urine. 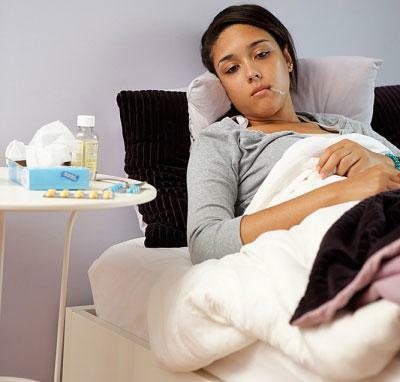 The drug "Kaffetin Cold" is used for symptomatic treatment of influenza and colds, including when there are such unpleasant symptoms as headache, dry cough, muscle pain, sore throat, runny nose, fever, nasal congestionsinuses and nose.

The drug "Kaffetin Cold" can not be administered to patients under the following conditions:

With caution, this medication is recommended when:

Medication "Kaffetin Cold": instruction for use

This drug is intended for oral administration only.

Dosage of the drug for adults and adolescents from 12 years is equal to 1 tablet four times a day. At a time, no more than 2 tablets are allowed.

The interval between use of the medicament should not be less than 4 hours. In this case, the daily dosage of the drug should not exceed 8 tablets.

If the body temperature is more than 3 days from the start of therapy and the dry cough does not last for 5 days, you should immediately seek medical help.

Adverse reactions after taking the drug in question can manifest themselves in different ways, from virtually all organs and body systems: 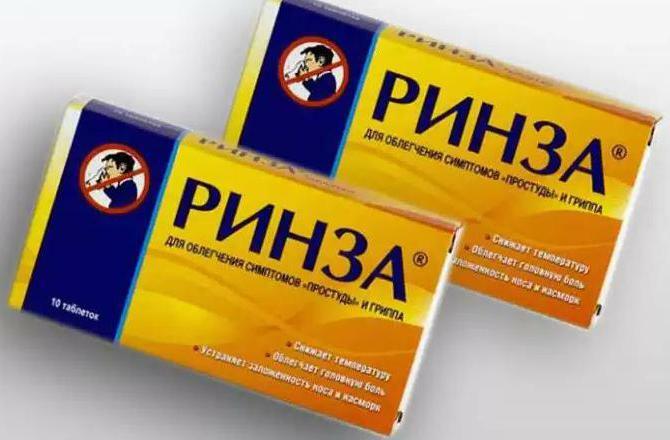 Medication When taking high doses of medication, the patient may experience nausea, ringing in the ears and pain in the stomach. Also, when the dosage is exceeded, the patient's skin becomes pale, his sweating increases and his heart rate increases.

The cases described require urgent gastric rinsing. Also, the patient is given a dose of activated carbon corresponding to the weight of the patient. If required, then symptomatic therapy is performed.

Paracetamol administration in large doses increases the effect of anticoagulants.

The use of drugs that relate to inducers of microsomal oxidation( eg, Phenytoin, ethanol, barbiturates, Rifampicin, Phenylbutazone, tricyclic antidepressants), and hepatotoxic agents significantly increases the formation of active hydroxylated metabolic products of paracetamol, which increases the likelihood of developing severeintoxication, including when taking small doses of medication.

Long-term use of barbiturates reduces the effectiveness of paracetamol.

The combination of paracetamol and salicylates increases the risk of developing bladder or kidney cancer.

Prolonged use of NSAIDs and paracetamol promotes the appearance of analgesic nephropathy, papillary renal necrosis, and also significantly approximates the terminal stage of renal failure.

The use of "Diflunisal" leads to a hepatotoxic effect of the drug.

Parallel use of pseudoephedrine and other sympathomimetic agents may contribute to the occurrence of toxic effects, and also have an additive effect. The combination of this component with monoamine oxidase inhibitors often leads to the development of hypertensive crisis. In this regard, the use of the drug in question is allowed no earlier than 14 days after the administration of monoamine oxidase inhibitors has been discontinued. 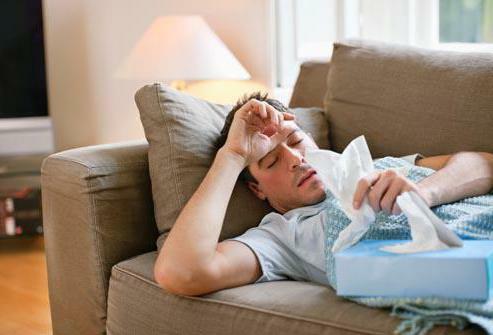 Parallel use of "Propranolol" enhances the pressor effect, which turns out to be pseudoephedrine. In addition, the use of the latter can reduce the hypotensive effect of such drugs as "Methyldopa", "Reserpine", "Mekamilamin", etc.

Now you know what is a drug such as "Kaffetin Cold".

Pervitine is methamphetamine. He is a psychostimulant and causes a high dependence, in connection with which is attributed to narcotic substances. Some people try to remove this component from the drug "Kaffetin Cold".The drug is repulsed in many ways. Its reception causes euphoria and at the same time detrimental to all systems and organs of man.

In the process of treatment, the drug under consideration must necessarily monitor the functional state of the patient's liver, as well as the indicators of peripheral blood.

During the entire therapy, the patient is not allowed to drink alcoholic beverages, as this can lead to a hepatotoxic effect of the drug. The same applies to caffeine-containing products and products.

This medication has a direct effect on a patient's ability to drive and engage in any other activities that require increased concentration of attention.

Due to the fact that this drug is often used as a drug, it is released only after the presentation of a doctor's prescription. By the way, it is quite difficult to find such a drug in pharmacies. Usually it is delivered after the preliminary order.