Many of us remember how in the childhood the grandmother poured an acidic liquid in the summer from a three-liter jar in which something like a jellyfish floated. We added sugar to the drink, and it perfectly quenched thirst. This drink used to be done using a tea mushroom, and today I would like to remind you what it is and how it is prepared. 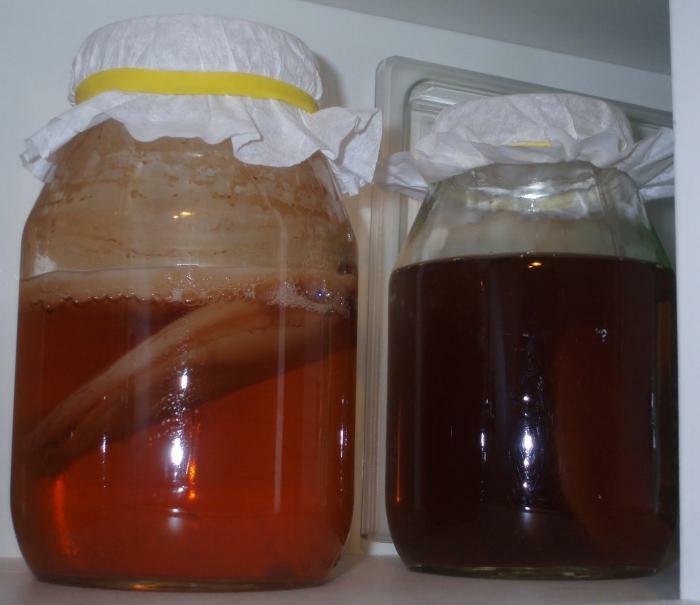 The Internet is often asked about where to get the tea mushroom, to which the inhabitants of the former USSR say - you can grow it yourself. To do this, in a sufficiently large amount of strong tea leaves, add a little sugar and put in a warm place for a month and a half. During this period on the brewing at first a film of an unsightly species is formed, which then will grow into a full-blown multilayer tea mushroom.

To make a drink take a small plate of mushroom, put in a 3-liter jar and pour cold sweetened weak tea( 5-6 spoons of tea per liter).In the first three days, the bank may not have any reaction, but after a week the mushroom will float up, and the tea will turn into tea kvass. To improve the characteristics of the drink in the tea, you can add honey, aromatic herbs.

To ensure that the tea mushroom has developed well and has not been sick( it is still a living organism), it is necessary to observe certain conditions:

Many centuries ago, the warriors of ancient Japan discovered what the tea mushroom is useful for. It was used as a disinfectant for wounds and suppuration, helped with disorders of the gastrointestinal tract. And after getting into Europe and Russia( during the Russo-Japanese War), its other properties were discovered. Drink from the tea fungus helped with angina, stomatitis, lowered cholesterol, promoted the increase of lactic acid bacteria, gave positive results in neurasthenia, poisonings, angina pectoris, poisonings and well supported the person with cancer. Medications are made from it - medusins ​​and bacteriocins. 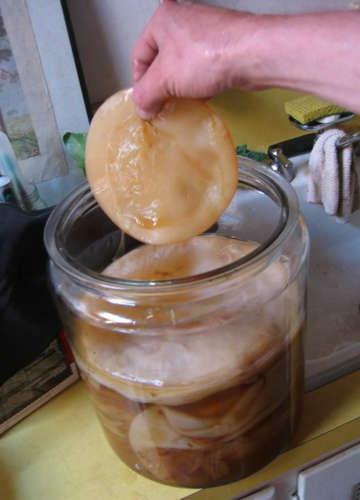 Chemical analysis of the tea mushroom infusion revealed the presence of six kinds of acids, enzymes, caffeine, B vitamins, a large amount of vitamin C and a group of PP.

However, the tea fungus, like many medicinal infusions, has contraindications to the use. It is not recommended to take insulin-dependent diabetics, people suffering from fungal diseases( due to the content of sugars in the infusion).You can not drink it and with an open stomach ulcer, gastritis. With a drink made on the basis of green tea, you need to be hypotonic. Also it is impossible to drink overdue on time tinctures and infusions made on the basis of old, sick mushroom.

The rest of the application of the tea fungus is extensive - with it you can make relaxing baths( per bath 0.25 liters of tea kvass monthly holding), lotions( a mixture of mineral water and tea kvass of monthly aging), deodorants( wipe in sweating zones), hair rinses, a cream for peeling skin( with olive oil).It helps well in the treatment of colds, as well as from bee stings. Such an "assistant" will be indispensable in the farm, especially since it will not be difficult to grow.