How to drink chaga and brew right?

In ancient times, people constantly used natural gifts for medicinal purposes. How many amazing plants around us, able to help in the treatment of diseases or restore and maintain strength in difficult times. There are many medicines based on natural healers. Many recipes are passed down from generation to generation. So let's look at the healing birch mushroom chaga. How to brew and drink it?

How does the chaga come about?

Often, walking through the forest, on the trees you can see a strange growth on the trunks of some trees. They are infected with the parasitic fungus Inonotus obliquus. Disputes are viable only if the bark of the tree is damaged. Getting to such a site, they penetrate inside and begin their harmful effects, the process develops very slowly.

After a few years, a fruit body of irregular shape is formed. The fungus grows slowly, and in 20-30 years will be from 5 to 40 centimeters in diameter, with a thickness of 10-15 centimeters. 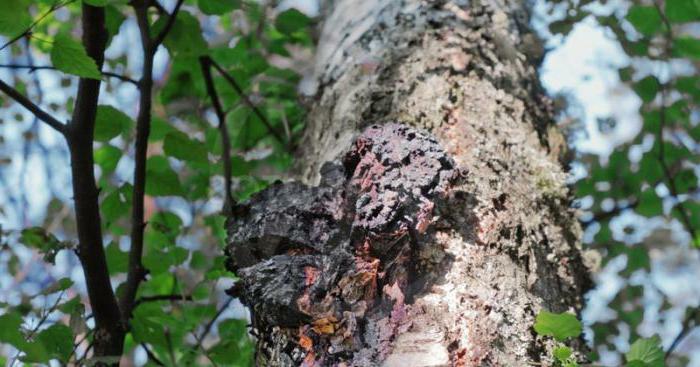 What shape the fungus will have depends on the nature of the damage to the tree bark through which the infection has occurred. The chaga mushroom has a black surface with small cracks. Inside the color is from dark brown to tawny-brown. There are bright veins. It grows and develops from 10 to 20 years. Its roots sprout into the tree, destroying it, as a result of which the tree dies.

Such mushrooms are most often found on birches. Hence the name "black birch mushroom".He also bears such names: a tinder is beveled, an inonotus is beveled, a chaga.

Where the chaga grows and what the

looks like This mushroom can be found in the taiga, forest-steppe. A large number in birch groves of Russia. The mushroom does not like high temperatures, so it is not found in the southern regions.

Parasitizes the chaga not only on the birch tree, but also on trees such as aspen, mountain ash, alder. However, it is necessary to know that only the fungus growing on the birch has medicinal properties.

What the chaga looks like, we described earlier. But it is worth noting that it is often confused with trutnovikov. They are false and real. Trutoviki have a pronounced round shape. Most often yellow or gray. Easily separated from the trunk, preserving its integrity.

The chaga mushroom has an irregular, fuzzy shape. From a tree it is not easy to separate. In this case, use a hatchet, because you have to truncate the tree trunk. It has three distinct layers. Upper, black cracked. Medium brownish, very dense. And loose, rusty-brown, with light veins. The last layer, as a rule, is not used and is removed with the remains of the bark.

Before we learn how to brew and drink chaga, we will get acquainted with its positive and negative properties.

Chaga is used in the therapy of many diseases due to its unique properties. In the chemical composition of the fungus were found oxalic acid, acetic, tartaric and formic. And also the following trace minerals: silver, magnesium, nickel, cobalt, copper and others. Melanin is contained in the cellulose. Also there is a large amount of phytoncides, phenol, sterols and resins.

Chaga has the following healing properties:

Before using a birch fungus, consult a doctor. How to drink mushroom chaga to extract the maximum benefit from it, we learn a little later.

When not recommended to use chaga

Chaga is not capable of provoking an allergy, but there are a number of contraindications for its use:

How to collect and store chagu

You can collect medicinal mushroom at any time of the year, but it is advisable to do it in early spring or late autumn.

It is necessary to stock up with a sharp long knife or a small ax. The fungus must be pruned at the base, while separating the soft, unsuitable part. 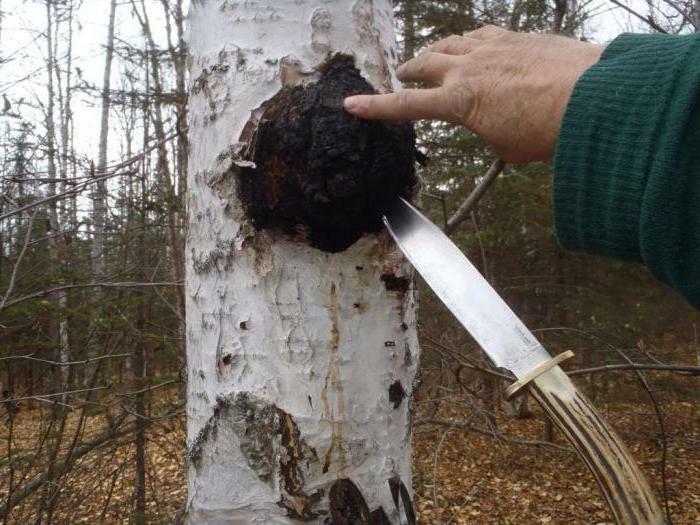 The mushroom has the property of becoming almost stone after it is cut. Therefore, you must immediately cut it into small pieces. You have to do this anyway before you drink it. In the future, this will facilitate processing.

Some tips for collecting chaga:

After cleaning the mushroom from the top layer and unnecessary loose, the middle of the mushroom is cut into pieces 4-6 cm. Then it is dried in natural conditions. You can use an oven for drying, heated to 60 degrees.

Store the mushroom in a dry, clean container with a closed lid. It is not necessary to prepare a lot of chaga, since the medicinal properties of the collected fungus remain only for 4 months.

Chaga in folk medicine is made:

Most often, people use teas, decoctions and infusions.

How to properly use mushroom chaga, how to brew and drink teas and infusions, let's talk further.

In order to extract the maximum benefit from the birch mushroom, it must be properly brewed.

Infusion can be stored in the refrigerator for three days. The drink turns tart pleasant to the taste.

Hiking way of preparation of a drink from a chaga

When there is not enough time to let it brew the broth, or there are no conditions for it, you can brew the chaga as follows.

If we talk about how to properly drink tea in the form of tea, then it comes down to the use of regular tea. You can add to the drink various berries, herbs. For example, currant leaves or raspberries, cloudberries, blackberries.

To prepare a strong tincture from chaga we will need:

Fill the mushroom with boiled water for 4 hours. Let the water drain and crush the chaga. Then we transfer the fungus to the water in which it was soaked, and heat it up to 40 degrees. Then strain the liquid and add water to a volume of 0.5 liters. About how and how much to drink chaga in the form of tinctures, we'll talk a little later.

It is based on a short infusion. Namely:

This infusion does not require storage in the refrigerator, but it is necessary to use it for three days.

How to drink tea in the form of tea? For this we need 200 grams of dried raw materials.

Many healers have their opinion on how to drink chaga. Not everyone thinks it is right to boil the mushroom. However, time has shown that such a drink also has medicinal properties.

Features of brewing and consuming chagi

I want to note that it is allowed to brew the same raw material up to five times.

Many note that the maximum effect is achieved with 3-4 brewing. At the same time the concentration of nutrients is maximal.

It is very convenient to brew chaga in a thermos. So, as described in the first brewing method, only use for a thermos bottle. After infusion for 2 days, the infusion is drained and the raw material can be poured again.

It's worth mentioning, if you want to achieve effective results, you need to start to stick to the diet. Namely, to exclude from food:

It is necessary to consume more vegetable and dairy products. To refuse from bad habits.

Before drinking chaga for medicinal purposes, it is necessary to consult with a specialist. And also to be convinced of the absence of contraindications.

How to properly chaga drink

As we know, tincture Chaga are used for treatment and prevention. It helps with many diseases. The infusion is stored for 4 days. Use for treatment of infusion, standing for more than 4 days, is unacceptable.

If we talk about how long to drink chaga, the answer will depend on the course of the disease and on the effect to be achieved.

As a rule, for the treatment of chaga drink courses. Duration is from 5 to 7 months. Use the infusion before meals for half an hour of 200 ml 3-4 times a day. Between courses it is necessary to take a break for 1-2 weeks.

Often ask a question about how to drink chaga for prophylaxis? For this purpose, tea from the fungus is used. In it you can add other herbs and berries. Such a drink can be drunk regularly, like regular tea. In places where chaga is found quite often, people use mushroom instead of brewing. They note a good state of health, a surge of energy and energy after drinking such a drink.

We drink chaku from oncological diseases

Widely used chaga in the treatment of cancer.

Prepare the infusion. Dry pieces are poured with water 50 degrees, we insist 5 hours, and then grind, put into a thermos and pour water in a ratio of 1: 5.

After 48 hours, pour the infusion and add the boiled water. You need to eat 1 hour before meals, a glass three times a day. Drink for a month, then a 10-day break, and the course can be repeated. Courses should be repeated within six months, and more can be done.

This infusion can be drunk and for prevention.

When treating oncologists, such positive results were noted:

Widely used chaga for the treatment of stomach, intestinal, even oncological pathologies. How to take a decoction, depends on the stage of the disease, and how much you can drink chaga, will help determine the doctor. After all, treatment with folk remedies should also be under the supervision of a specialist.

In the treatment of cancer to 200 grams of chaga add more such medicinal plants:

The mixture is poured into 3 liters of cold water. After that, it is kept on fire with a weak boil for 2 hours, then the infusion is put in a warm place for one day. After that, filter and add to it 500 grams of honey and 200 grams of aloe juice. The mixture is thoroughly stirred and left for 4 hours.

Take this medicine as follows:

This medication can be taken from 2 weeks to 4 months.

In the treatment of many diseases, other herbs are allowed to be added to the chaga. This only enhances its effectiveness.

It should be remembered that before you start using chaga for medicinal purposes or in preventive care, you need to consult a specialist so as not to damage your health, and also you need to learn how to properly brew chaga and drink to extract from the drink as possiblemore use.