The procedure of the operation to reduce the stomach, how and why it is done. Gastric banding

Not every person suffering from obesity is able to get rid of excess kilos by himself. Even consultations of professional specialists in losing weight in some cases are powerless. However, obesity is not only an unpleasant external defect. Very often it becomes a source of development of many diseases. In this case, losing weight is simply vital. And then the real rescue for patients are operations to reduce the stomach. 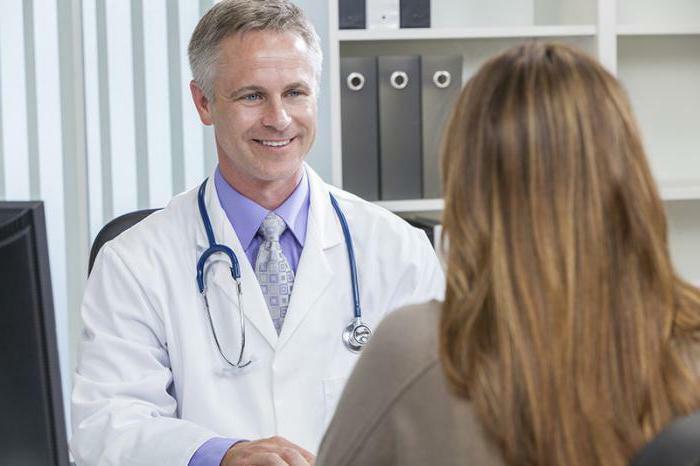 The most common cause of obesity is in a large amount of stomach. It stretches as a result of malnutrition and non-compliance with the diet. Everyone knows that doctors recommend eating food fractional - 5-6 times a day. In addition, it is important to remember the number of portions. It should be such as to fit on the open palm.

Unfortunately, most people completely ignore these tips. They eat irregularly, most often after work, in the evening. And at the same time they eat a portion 2-3 times larger than recommended. Of course, in such conditions, the volume of the stomach increases. Stretched body requires more food. And the assimilated calories quickly transform into extra pounds.

You can change the situation yourself, without resorting to prompt intervention. To do this, you need to start eating properly, gradually accustoming the stomach to small portions. Over time, it narrows. In addition, there is a special set of exercises aimed at combating obesity.

To adjust to a completely different lifestyle, unfortunately, it does not happen for every patient suffering from excess weight. And these people have one thing - to think about the operation to reduce the stomach.

These operations are quite different in technique. In addition, they have their indications and contraindications. But the essence of these interventions is one - to significantly reduce the stomach, reduce the feeling of hunger and protect the patient from overeating. 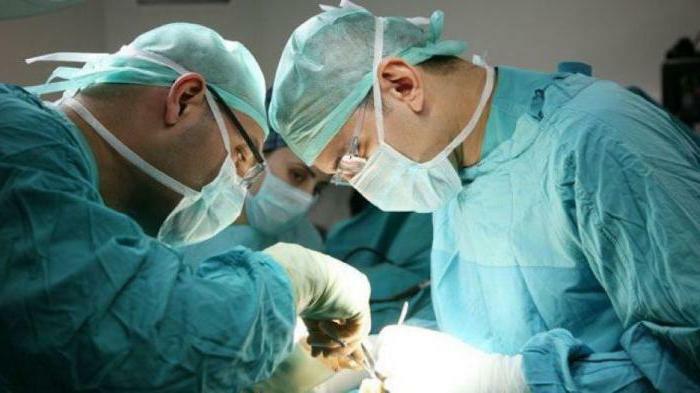 So, let's see how the operations to reduce the stomach occur.

Operation is an extremely popular procedure for the formation of a small ventricle. What lies at its basis? Such a decrease in the volume of the stomach is based on the division of the body into 2 unequal parts. All the saturation receptors are in the upper zone, which is separated by a special supporting ring. This part has a relatively small size and is approximately 20 ml.

During the meal, the small ventricle is filled very quickly. The receptors located in this zone transmit to the brain information about the saturation of the organism. Accordingly, a person is fully protected from overeating. After a couple of minutes, the food enters the greater part of the stomach. In the future, it is processed and goes the usual way.

Such operations are recommended for patients whose body mass index exceeds the norm by 35 kg.

Surgical intervention can be performed by two methods:

However, there are contraindications to vertical gastroplasty. It is absolutely not recommended to people who are used to their sorrows "zaedat."Because such patients may develop depression.

Operation provides very favorable results. Patients manage to get rid of almost 60% of excess weight. The best results are observed in the first six months, after the intervention.

How much does such an operation to reduce the stomach? The price for an event varies depending on the medical institution in which it will be held. On average, the cost of vertical gastroplasty is 102,000 rubles.

People with obesity are constantly experiencing a very strong sense of hunger. Bypassing the stomach can save patients from the "wolf" appetite, and therefore, from overeating.

What does this operation mean? During surgery, the doctor forms a small ventricle. It is directly connected to the small intestine. With this operation, a large part of the stomach is excluded from the digestive process, but all organs are preserved.

The main advantages of such an intervention:

However, do not forget that gastric bypass surgery is a surgical procedure. Therefore, there is always a risk of complications.

Unpleasant consequences that patients may encounter are as follows: 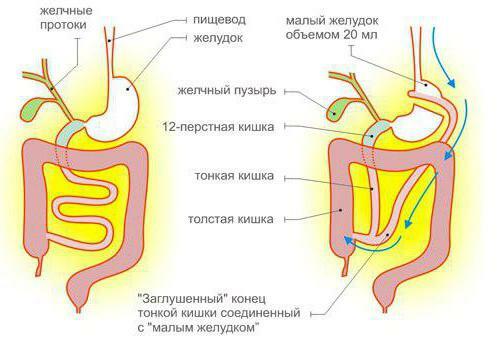 Patients after shunting are prescribed special drugs that are recommended for lifelong use:

This is an effective and popular operation to reduce the stomach. The price of such procedure is on average 130 000-200 000 rubles and is carried out in many clinics.

Gastrectomy of the stomach

The operation involves removing most of the organ, but at the same time retaining all the physiological valves necessary for a complete digestive process. Resection allows from a large stomach to make a narrow tube, the volume of which is about 100-120 ml.

Indications for such an operation are the following conditions:

Effective weight loss after surgery, according to doctors, is due to the following features of the operation:

This operation is not recommended for people suffering from heartburn. It is better for these patients to consider the option of shunting. 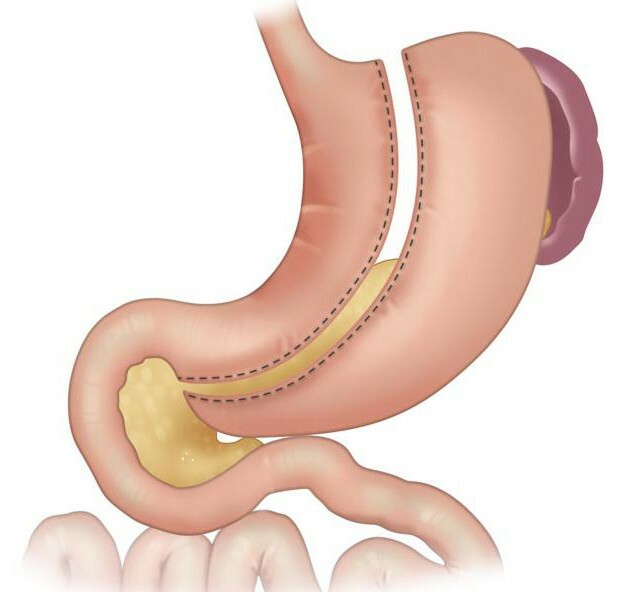 If we talk about the possible negative consequences, then no risks such as bleeding, failure of the joints, no surgeon can exclude. In addition, a rather unpleasant consequence associated with non-compliance in the future with proper nutrition, may be a stretching of the stomach. In this case, the doctor can recommend a second operation. But now we are talking about shunting.

Such surgical operations to reduce the stomach are allowed for people of all ages. They can be carried out by both elderly people and adolescents.

The essence of the banding

This is a fairly effective operation, which belongs to the category of simple and safe. Gastric banding implies the division of the body into two uneven parts. The procedure is carried out by putting on a special ring. So in the upper region of the large organ forms a small ventricle.

This intervention is recommended for people with a body mass index above 35 but not exceeding 50.

Gastric banding is prescribed for patients whose obesity has led to serious health problems, such as:

The procedure is quite efficient and provides excellent results. In addition, the bandage rarely leads to side effects.

But such an operation has contraindications. The bandage is not performed in the following cases:

The patient who has undergone the bandage will need to get used to the new recommendations on the diet regime. And this is not easy enough.

Doctors recommend observing such rules throughout their later life: 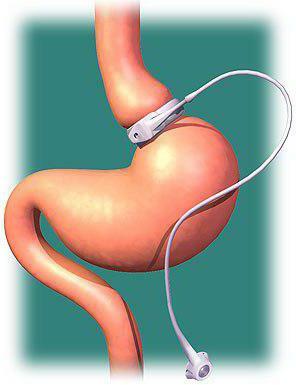 Today such an operation is performed by laparoscopic method. Thanks to this method, surgical intervention does not require general anesthesia, the load on the heart is significantly reduced. In addition, small incisions not exceeding 1.5 cm remain on the body.

One of the advantages of banding is the ability to loosen and tighten the ring. Thus, the patient has the opportunity to regulate the process of losing weight.

What is the cost of such an operation to reduce the stomach? The price in St. Petersburg is 170,000 rubles.

If you consider all operations to reduce the stomach, then the simplest of them is ballooning. This method, in fact, is not even a surgical intervention. This is a special event, reminiscent of ordinary gastroscopy.

What is this manipulation? The patient is injected into the stomach with a probe through the oral cavity, by means of which a special balloon is placed in the organ. In appearance it resembles a bubble with thin walls. The can is filled with water( approximately 600-700 ml).In the process of inflation, it fills a part of the stomach. As a result, there is little room for food in the body.

The can is found in the stomach for approximately 4-6 months. After this time, it must necessarily be deleted. The procedure is also carried out using an endoscope that excludes cuts.

Where gastric emptying operations are performed

Similar surgical procedures are performed today in almost all clinics. If the doctor sees the expediency of the operation, he will certainly recommend a hospital in which you will be helped.

If you yourself choose a clinic, then be sure to study patient feedback, be interested in the technology of conducting. In addition, specify how professional the surgeon is in the hands of which you will fall. Does

really provide excellent results for a stomach reduction operation? The patient's feedback shows that in almost all cases it is possible to achieve the desired weight loss. People claim that they were able to lose up to 65 kg. Especially popular are the following interventions: shunting, bandaging.

However, the operation has the opposite side. Patients who have undergone such interventions face the need to strictly follow the established diet.

Before deciding on such an event, be sure to weigh all the pros and cons. Perhaps you can still take control of yourself and, without the help of a surgeon, limit your diet? If you do not get it, then trust your health only professionals!