Medicine does not stand still, developing further, inventing the newest methods of helping people in different situations and pathological processes. One of the relatively new inventions is an elastic patch - kinesio teip. Although it was invented about 25 years ago, it began to be applied only recently. The pioneers of this method were professional athletes, as they can not "leave the race" and after various injuries requires a speedy recovery. This method is becoming more popular every year for ordinary people. How did he deserve the widespread approval? Kinesio teips - what is it? How do they help with various muscle injuries? 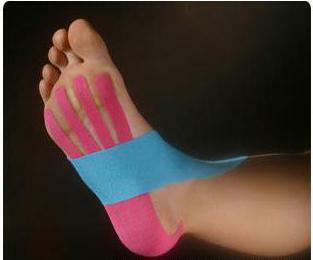 Among the newest medical inventions, which greatly facilitate the life of athletes and people far from sports, the relatively recent kinesio teip patch is of interest. What is it and in what field do you use it?"Kinesio" literally translates as "movement", and "teip" - "plaster" or "tape."That is, a tape that protects when moving. The properties of this product are the most similar to our skin.

This tape has some similarity with the usual bactericidal plaster in that it can facilitate movement when they are difficult. People who are far from sports, can also come in handy kinesio teip plaster. What kind of magic is this and how effective is it? The result of the application is a steady analgesic effect with trauma or it becomes possible to protect the muscles from strains and ruptures.

Alternative to tablets and ointments 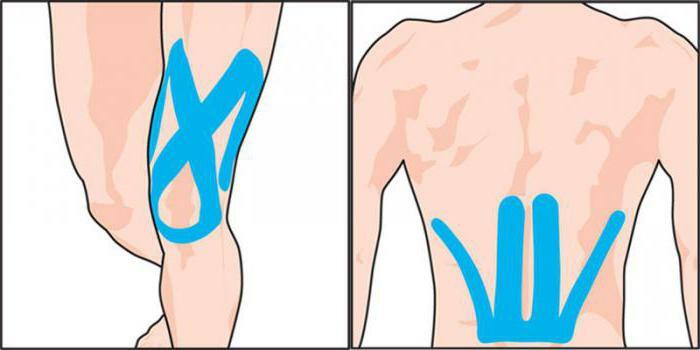 A special plaster that adheres to the body and is an excellent alternative to elastic and gypsum bandages, analgesics, rubbers and tablets, has appeared in the retail industry quite recently.

To the question: "What is kinesio teip?"- athletes who after injuries stick it to the body can give an answer to reduce pain. It is also used when stretching the muscles and in order to protect them with excessive loads. To learn kinesiotyepirovanie - what is it, you need to try this plaster in the work, because the range of its application is quite wide. Kinesio teip is nothing but a ribbon with elasticity and mobility. The composition of this adhesive is slightly different from the usual ones.

Kinesio teip - what is it, what does it consist of?

This tape is made of cotton. On the part that is applied to the skin, a special acrylic gel is applied, which keeps it on the body. The plaster does not bind the movements, it ensures normal air circulation. Thus, kinesiotherapy is a completely new direction in desmurgy, which opens up entirely new possibilities in the treatment of many ailments and the alleviation of certain conditions.

Who uses this ribbon? 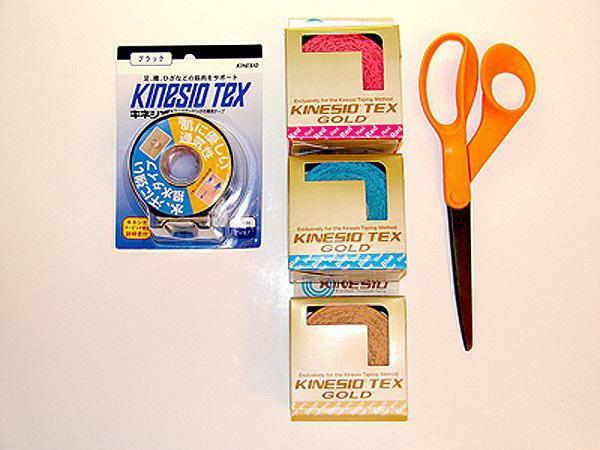 Along with the question of kinesio teip - what is it, they often ask: "Who most often uses it?"Applying medical tape to such categories of people:

Reasons for its use

What is the therapeutic effect of the kinesio tape adhesive? Restoring muscles and joints is the main reason for using this multifunctional tape. The skin that is above the affected ligaments and muscles rises. As a consequence, they are fixed in one position, but they are not squeezed and the movements are not constrained. Lymph begins to move away from the affected area, which reduces painful sensations.

How does kinesio teip work? 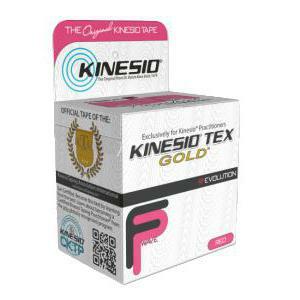 Pain is a defensive reaction of the body, a signal of the brain about danger. Damage causes a flood of blood to the affected area and swelling, a signal about it comes to the brain, and he reacts with muscle or joint pain. If you need to ensure the fixation of a joint or other place on the body, use kinesio teip. What is this wonderful tool, why is it so effective and popular? The gel reliably adheres the patch to the skin, and no negative sensations are observed. It also provides the effect of applique. With this, the pain decreases, the movements become smooth.

In order for the patch to function, it is necessary to observe certain conditions. After all, this directly affects the therapeutic effect of the remedy. The skin should be prepared before applying this tape: the hair should be shaved, and the skin should be degreased with alcohol. Only after this you can proceed to the application of a patch. But even if the tape is well glued, do not immediately put the load on the affected area. To tape well seized, you need to wait some time - about half an hour.

There are some more features when applying kinesio teip, which must be taken into account:

Contraindications to the use of an improved plaster - kinesio teip

It should be noted that any tool has not only indications for use, but contraindications. Do not use a patch if a person has:

Where can I apply the tape?

This is an absolutely universal tool that can be applied not only to the joint, but also to the back, stomach. Therefore, the view that kinesio teip is intended for specific parts of the body can be considered a delusion. It is important to observe the basic rules when applying to achieve the maximum result. Also, do not have contraindications to the use of this patch.

The main advantages of this method 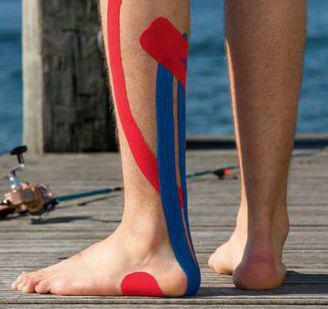 This method can be considered progressive in medicine, since it appeared recently, but has already gained popularity due to ease of use, efficiency and accessibility. Advantages of kinesio teip are that it can be worn for up to five days from the moment of fixation. It can take a shower, wear any clothes. The skin breathes normally during this fixation. Elastic bandages and plastering of this effect will not achieve. The tape is easily superimposed and just removed, does not create any discomfort, does not cause allergies and skin irritations. The patch is well fixed, does not slip. Another advantage of this method of fixation can be called the absence of side effects. Therefore, it can be taken by almost all people who have received any muscle injuries or who have an excessive load on them.

In addition to the fact that you need to prepare the skin before applying the patch, there are still basic rules for applying kinesio teip. 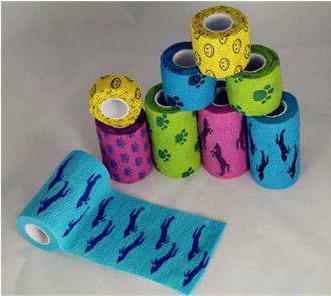 In what sizes is kinesio teyp produced?

Application kinesio teips, as already mentioned above, is very wide. The choice of different models is also not small. You can choose a tool of different color and size. You can buy a tape, the width of which is five centimeters and the length is twenty centimeters, or it can be in a roll five meters long and five centimeters wide. Anyone who buys a roll will be able to simulate a patch as long as he likes. And the coloring does not affect the properties of the plaster in any way.

Where are these plasters popular?

Kinesio teip was invented by a doctor from Japan in the seventies of the last century. Its first application occurred in 1988 in Seoul at the Olympic Games. Since that time, his long time was used only in professional sports. Then it began to be used by amateur athletes and even by ordinary people who are not involved in sports. The popularity of these patches is growing and expanding all over the world every day. 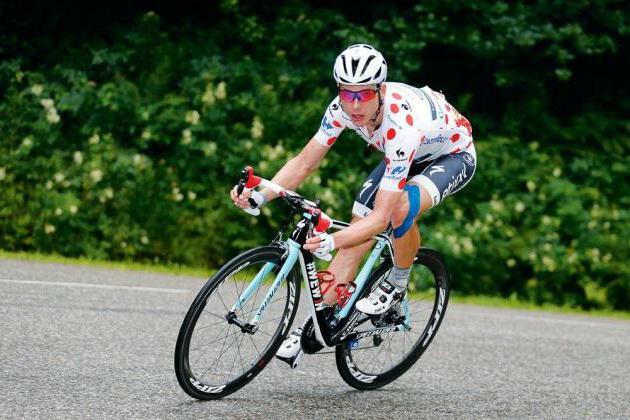 As they say, how many people, so many opinions. In the use of any new method, there are drawbacks and advantages. So in the application of kinesio teip - some have found a panacea for all troubles with muscles, while others have not estimated the effectiveness of the plaster.

Some patients note that patches of some firms are quickly peeled off. Naturally, the effect turned out to be weak, which led to people's displeasure. You do not need to chase the price or the coloring. Ribbons of Korean production are well known.

Many athletes and people with back pain also note that the effect can not be achieved immediately. It depends on the tape itself, the correctness of its application, as well as the neglect of the disease. On average, pain care was noted for 3-4 days. At first, it helps those who have only started pain, and they did not pull with treatment. But with severe trauma or prolonged painful sensations, patches help later.

Professional athletes note the almost magical effect of kinesio teips during running or swimming for long distances. They help the muscles adapt to any conditions and prevent the onset of seizures. Therefore, sometimes they are even used not for treatment, but for prevention, because professionals already know their weaknesses.