The preparation "Sibutin": instructions for use, description and reviews

How and in what cases is the patient prescribed Sibutin medication? Instructions for use, reviews, analogues and indications for use are presented below. Also in the article the composition of this preparation, its form of release and prohibitions to use are considered. 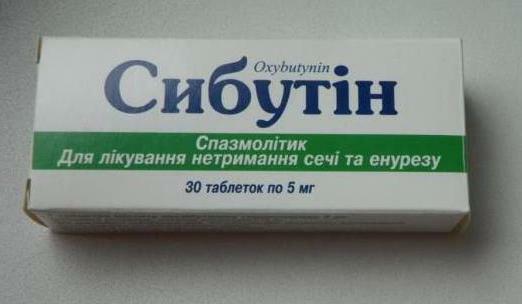 The preparation "Sibutin", the instruction for use of which is indicated below, is available in the form of white round tablets with a risk on one side. Their active ingredient is oxybutynin( in the form of oxybutynin hydrochloride).Also in the composition of the medicament are the auxiliary ingredients, which are presented as lactose monohydrate, microcrystalline cellulose, potato starch and calcium stearate.

Pharmacological properties of the preparation

How does Sibutin work? Instructions for use, reviews of doctors report that the mechanism of action of this drug is completely due to the effectiveness of its active substance.

According to experts, "Sibutin" is a blocker of M-holinoretseptorov belonging to a group of tertiary amines. Due to moderate M-cholinoblocking activity, the agent under consideration can directly affect the smooth muscles of the internal organs. In this case it has spasmolytic and miotropic action. In other words, this medication eliminates spasms, and also lowers the muscle tone of the following organs: bile ducts, gastrointestinal tract, urinary tract, uterus and bladder. It should be borne in mind that in people with neurogenic dysfunction of the latter oxybutynin is able to relax the detrusor, reduce its spontaneous contractions, reduce the frequency of urge to urinate, and increase the capacity of the bladder.

Kinetic features of the drug

Is an oral drug such as "Sibutin" absorbed? Instructions for use( the composition of the drug was mentioned above) reports that after consumption of tablets, oxybutynin is absorbed fairly quickly from the digestive tract. Studies have shown that the maximum concentration of this element in the blood is about 8-13 ng / ml. This indicator is typical for a dose of 7-10 mg, taken by young and healthy people. There were also significant individual fluctuations in the amount of oxybutynin in the plasma.

Due to the first passage through the liver, the absolute system bioavailability of this substance is about 6.2%.

The main metabolite of oxybutynin is active desethyloxybutynin. Also, other derivatives, including phenylcyclohexiglycolic acid, are formed during the transformation, but they are inactive.

About 0.02% of the drug taken is excreted along with urine. The association of oxybutynin with albumin is approximately 83-86%, and the half-life of it is two hours.

With prolonged use of the drug, its accumulation is low.

When can a patient be assigned Sibutin? Instructions for use( the indications will be discussed below) states that this drug is actively used in the therapy of urinary incontinence, which is associated with unstable bladder work, which is neurogenic in nature( for example, in the hyperreflexia of detrusor, spina bifida or multiple sclerosis) or hasidiopathic nature. It should also be noted that the agent in question can be shown to be used in night enuresis in children aged five years. To this end, the drug is used both as monotherapy and in combination with other medicines.

Prohibitions for the use of tablets

When should you not prescribe a patient a Sibutin medication? Instructions for use asserts that the following conditions are contraindications for taking this medication:

Sibutin Medication: Instruction for Use

"Sibutin" tablets are prescribed mainly to adults. They should be taken 5 mg three times a day. For elderly patients this drug is recommended to be used in an amount of 5 mg twice a day. In special cases this medicine is prescribed for children aged from five years. When a bladder of a neurogenic nature is disrupted, 5 mg twice a day is used for medication, and 5 mg twice daily for night enuresis. The last dose should be taken right before bedtime.

What are the negative reactions caused by the drug "Sibutin"?Instruction for use reports that most often such effects occur on the part of the gastrointestinal tract. As a rule, they are manifested by dry mouth, constipation, nausea, discomfort in the abdominal area and diarrhea.

Also considered drug can cause:

What are the symptoms of an overdose of Sibutin? Instructions for use say that such manifestations include the following: anxiety, increased severity of adverse reactions, agitation, respiratory and vascular insufficiency, lowering of blood pressure, psychosis, coma and paralysis of the respiratory muscles. 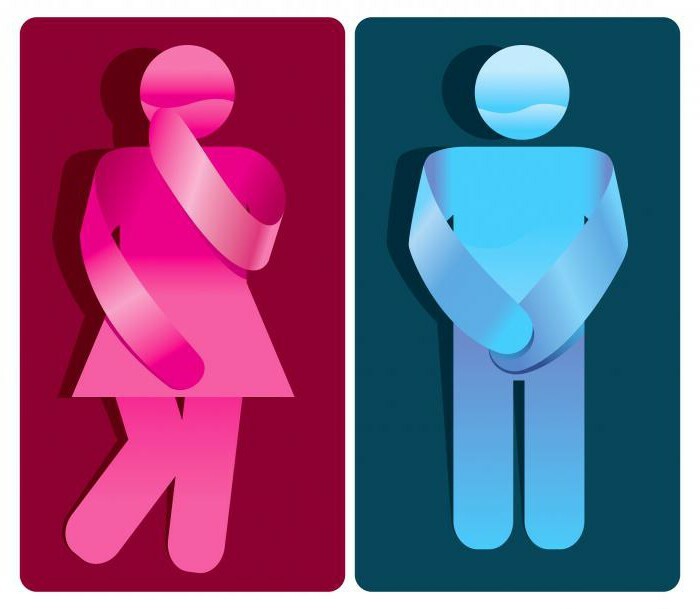 For the treatment of such conditions, gastric lavage is used, as well as intravenous injection of physostigmine.

When expressed with excitement or anxiety, the patient is prescribed "Diazepam"( IV, 10 mg), with symptomatic therapy for fever, tachycardia shows the drug "Propranolol"( IV), with urinary retention, catheterization of the bladder, respiratory paralysismuscles and the development of a curare-like effect is provided by mechanical ventilation.

How does it interact with other tools?

Is it possible to use Sibutin with other agents? Instructions for use asserts that when combined with other medicines, the medicine in question may cause an increase in adverse reactions. As a rule, this effect is observed when the "Sibutin" is administered simultaneously with the drugs that have an anticholinergic effect.

Sedatives and ethanol may cause dizziness and may increase drowsiness.

At simultaneous reception with "Itraconazole" the concentration of oxybutynin in blood raises.

Can I use the medication while I'm waiting for the baby? Security of the use of Sibutin in the specified period is not established. In connection with this category of patients, the mentioned agent is not prescribed. It should also be noted that oxybutynin can penetrate into breast milk, so it can not be used during lactation. If it is still necessary, then breastfeeding should be discontinued. What should the patient know before using Sibutin Medication? Instructions for use( analogues are indicated below) states that with special care this drug should be prescribed to weakened elderly patients, as well as patients with severe kidney and liver diseases and neurocirculatory dystonia.

As with other anticholinergics, care should be taken when using Sibutin for people with a hernia of the diaphragm( esophagus), which is accompanied by reflux esophagitis.

Against the background of the use of this medication, the patient may have increased clinical manifestations of arrhythmia, hyperthyroidism, prostatic hyperplasia, ischemic heart disease and heart failure of a chronic nature.

An increased ambient temperature with the use of the drug may provoke the development of fever, as well as abnormalities in the work of the heart( as a result of reducing sweating).

People who are engaged in hazardous activities that require special attention and speed of reactions, it is necessary to warn that this medication can cause a decrease in visual acuity and drowsiness. 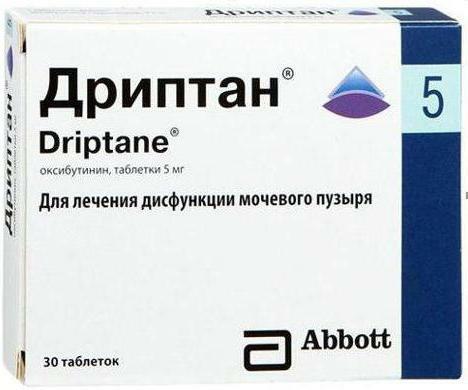 Reviews about this medication can be found a lot. Some patients were satisfied with the effectiveness of the medication. They argue that this drug helps control urge to urinate, including at night. However, many people complain of the development of headaches and allergies, as well as other adverse reactions. In this regard, they are forced to replace this tool with safer counterparts.