To understand what functions the vitreous body performs, it is necessary to understand its role in the system of organs of vision. This anatomical structure is located behind the lens of the eyeball. On the outside, the vitreous body of the eye is bounded by a thin membrane film, with the inner - divided into tracts( channels).

If you look closely, how the eye works, you can see that the vitreous humor makes up most of the contents of the eyeball. It comes in contact with the outside of the plane of the ciliary structure, and at the back - with the disc of the optic nerve. In humans, the vitreous body affects the full maturation of the retina and its sufficient blood supply. It has no vessels and nerves. The consistency of the gel-like medium is facilitated by the process of unilateral osmosis of nutrients from the liquid produced inside the eye. The vitreous humor has a low bactericidal activity, so leukocytes and antibodies are detected in it not immediately after infection, but after a while. With a partial loss, the gel-like substance is not regenerated, but replaced by the intraocular fluid structure. 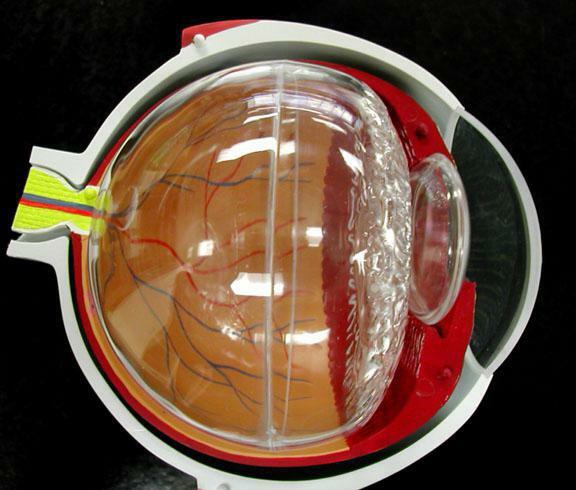 From the section of ophthalmology "Anatomy of the eye" you can get a detailed idea of ​​the volume of the vitreous. It turns out that it is no more than 4 ml, while more than 99% of this amount consists of water. Thanks to the liquid filling, the volume of the eyeball is unchanged.

is formed The formation of this gel-like substance occurs in the early stages of intrauterine development. The initial function of the vitreous body was to provide power to the lens and anterior segment through the hyaloid artery. After the lens of the fetus is completely formed, this vessel disappears with time, and the child is born without it. But as is known, any rule has exceptions: in some cases, the hyaloid artery is found in adult people in the form of transformed strands of various sizes.

What is needed for

The main function of the vitreous is to transfer it to the intraocular fluid produced by the ciliary eye. Part of the substance comes from the back chamber, getting directly into the vessels of the fiber and the optic disc. In front of the vitreous body there is a small depression, which corresponds to the location of the back of the lens. It is this semi-liquid substance that guarantees its strong connection with the membranes of the eye( ciliary epithelium and internal border membrane).

In addition, thanks to the vitreous body, which retains its shape even under the influence of the load, it is possible to carefully peel off the shells without further spreading. The cortical layer of this part of the eyeball consists of hyalocytes synthesizing reticulin and hyaluronic acid, necessary to maintain the correct consistency. It often forms microcavities due to rupture of the retina, which, in turn, contributes to the development of its detachment in the future. 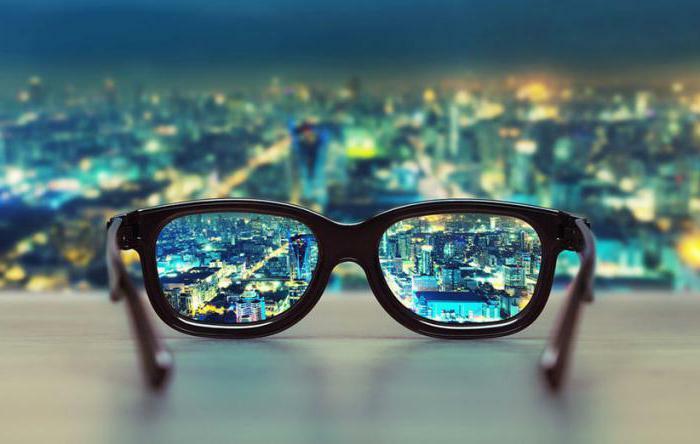 How it changes with age

If you pay attention to how the eye is made in an adult, then when you examine the vitreous body, changes in its structure will become noticeable. In newborns this substance is a homogeneous gel-like mass, but over the years it is reborn. With the period of growing up in a person, the individual molecular chains coalesce into larger compounds. Gel-like mass is transformed into an aqueous solution and accumulation of molecular compounds over time. Changes are also reflected in the quality of vision: these floating groups are seen by a person in the form of flashing points, "flies".At the final stage of this process, the vitreous body becomes turbid and flakes off from the retina, which is manifested by an increase in the amount of molecular suspension. In itself, this violation does not pose a significant threat, but in isolated cases it may entail a retinal detachment.

What role plays for the vision of

To fulfill all of its functions, the vitreous begins from the moment a person appears. The physiological purpose of this department of the eyeball is as follows: 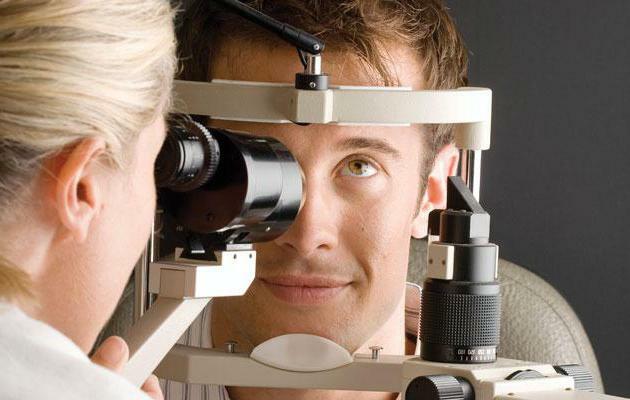 Diseases that can occur

The clouding of the semiliquid structure can proceed in different ways. In most cases, pathological changes occur behind the cornea and the lens. The vitreous humor in this case undergoes pre-entensal turbidity. In other cases, changes occur in the central part of the organ or are combined.

All diseases of the vitreous are conventionally divided into congenital and acquired. The first group includes such pathologies:

With age, the development of a number of pathological phenomena and diseases of the vitreous humor is possible. These include: 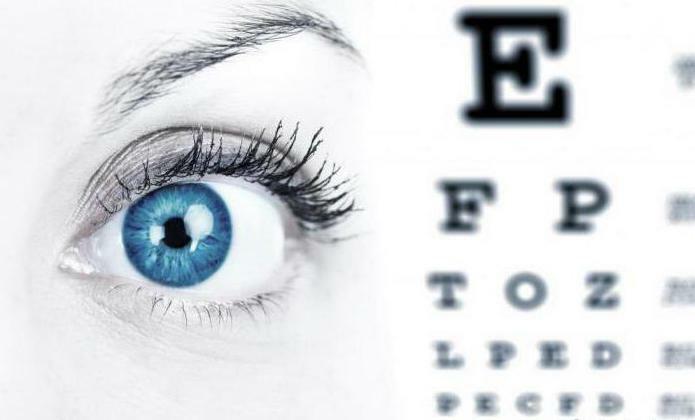 Often in patients, the inflammation of the vitreous body of the eyeball is diagnosed - endophthalmitis or panophthalmitis. A more rare phenomenon is the posterior detachment of the substance, due to which the membrane film is broken at the attachment points. Against the background of the progression of the pathology, the vitreous body spreads between the retina and the posterior hyaloid membrane, which leads to a rapid decrease in visual acuity.

is manifested Speaking of the symptoms of anxiety for patients with diseases of the vitreous structure of the eye, it is worth noting that they are manifested, as a rule, by floating point opacities. The patients are looking for blots, threads, flies of various sizes. With regard to a noticeable impairment of vision and pain in the eyes, these signs often occur with hemorrhage and inflammation of the vitreous.

In the case of a decrease in the vitreous function of the patient may not long to worry about any symptoms. In this case, the likelihood that the disease will cause a deterioration in sight is quite large.

To provoke disturbances in the functioning of the visual system, nervous experiences, constant stress, and impairment of visual functions caused by age-related changes are possible. In the treatment of vitreous pathologies in the first place, it is important to constantly monitor the ophthalmologist and periodically conduct a comprehensive examination. Only a qualified specialist is able to appoint a competent treatment of the problem.

Patients who are over 40 years of age are considered to be at a risk for diseases of the vitreous structure of the eye. If vision problems appear at an earlier age, a person needs to reconsider his lifestyle and, if possible, exclude provoking factors. 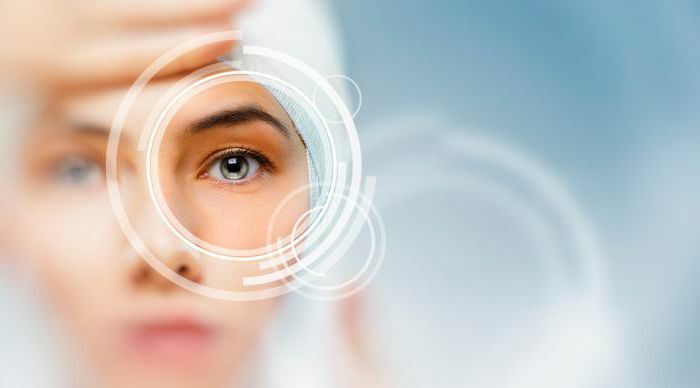 What is the destruction of

This is a destruction of the vitreous, which leads to the emergence of a very pronounced symptomatology. The filling substance becomes cloudy, which is perceived by the patient as the occurrence of floating jamming - villi, strips, dots, nodules. The process of destruction of the vitreous body is most often caused by violations of the blood supply of this zone, endocrine system diseases, eye and head injuries, stress. Of course, age factors also play a role.

For characteristic destruction, chaotic opacities are characteristic. In this case, visual disturbances can occur in front of the patient in any area of ​​visibility. In the process of destruction of the vitreous structure of the eye appear moving transparent inclusions, which have clear boundaries. In one place they do not stand and move after the pupil. The functions of the visual organs do not suffer at the same time, therefore, the treatment of destruction is extremely rare, only in the presence of critical deterioration.

To date, therapy involves splitting the areas of turbidity with a laser. It is important to note that any surgical intervention on the vitreous can cause complications.

The risk of detachment and hemorrhage

In both cases there is a risk of loss of vision, and therefore to any of the pathologies should be taken seriously. When detached, short-term flashes, glare, lightning or black dots appear before your eyes. The process of separation of the vitreous humor is safe for the patient. You can manage without intervention when the symptoms have a weakly expressed lubricated character. But if you do not take any medical measures, a decrease in visual function is inevitable. 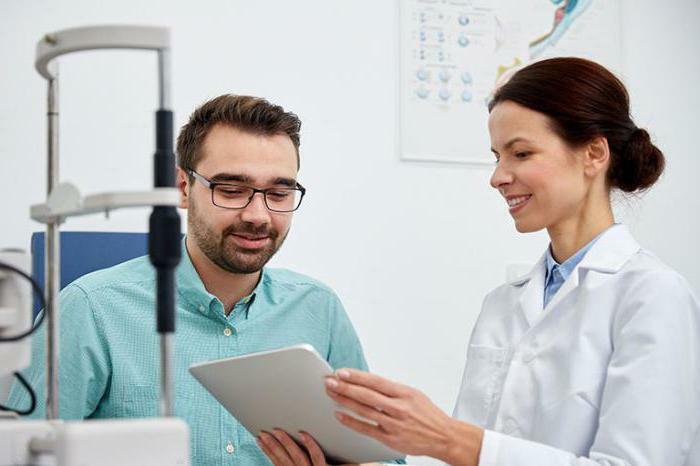 In addition, in cases of ophthalmology, cases of hemorrhage into the vitreous humor are known. Even if this disease does not bring any discomfort, the patient should regularly visit a specialist. Repeated episodes of hemorrhage lead to loss of vision, so the primary task of the treating doctor is to prevent relapses and maintain the vitreous body.

Before beginning treatment of any disease of the vitreous of the eye, it is important to accurately differentiate it from other pathologies by the type of detected changes of a degenerative or inflammatory nature.

scientists In the presence of diagnosed disorders from the nervous system, patients are advised to undergo surgical treatment of the vitreous. This operation is called vitrectomy. After removal of the gel-like liquid, the department is filled with a non-natural substance similar in physical characteristics. 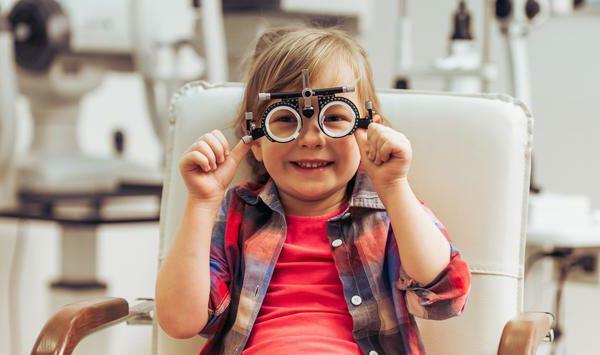 To date, ophthalmologists have developed methods for the synthetic cultivation of hyalocytes. They are planned to be used to create a substitute for the vitreous that has changed its structure. The analogue should be free from the drawbacks of the silicone fluid that is implanted in patients after vitrectomy today.