Kalina red is a plant, well-known and revered in Russia at all times. Many works of the national epic are associated with it. On the viburnum are composed songs and poems. It is mentioned in stories and films. Suffice it to recall a film based on the same story by V. Shukshin "Red Kalina".But it was not only her appearance that always attracted people. Since ancient times it is known about its medicinal properties. This plant has long been used to treat many diseases. Kalina vulgaris takes a worthy place in many recipes of alternative medicine. Use for various diseases flowers of the viburnum. Useful properties and contraindications of this plant have been studied for a long time. About them and will be discussed in the article. 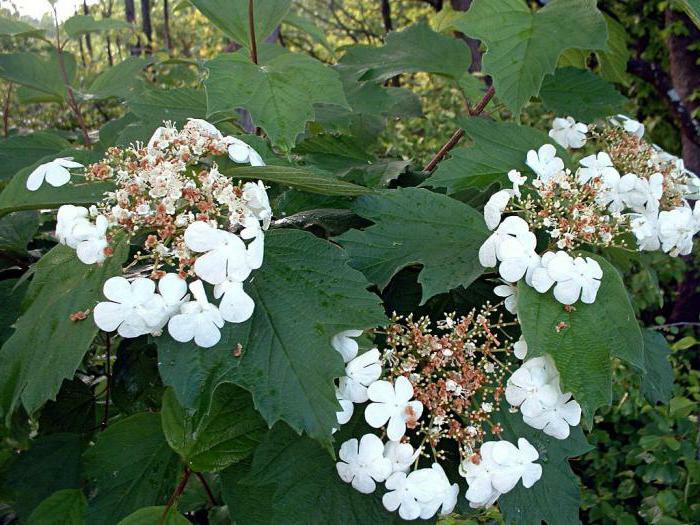 The plant of the viburnum is a member of the adox family, and used to be a member of the family of honeysuckle, even isolated from other representatives of the Kalinov family. But careful research dictated the need to change its taxonomy. Kalina was considered to be an Adocce family.

The plant looks like a bush. Sometimes it grows in the form of a small tree. In this form it can reach a height of 4 m. The trunk is covered with bark, which has a grayish-brown color. The leaves are of a opposite nature with a dark green color of their surface, glabrous. There are large teeth along the edges. The plant is distinguished by flowers, which are pink or white. The fruit is the drupe. The berry is juicy, with a bright red color and an acid-bitter taste.

The flowering time is at the end of spring - the beginning of summer, and the ripening of fruits is observed during September until frosts.

Where did its name come from?

There are several versions of the origin of its name. According to one of them, they dubbed her so for the color of her berries, which is like a red-hot metal. According to another statement, its name is associated with the taste of its berries. Bitterness from berries disappears after they are "calcined" by frost. But it can disappear not only under the influence of low temperatures. The same happens when the fruits are heated.

Many folk rites are associated with this plant. At weddings near the young people put bouquets of bouquets. They were the embodiment of the happiness of living together. The berries of the plant served as a decoration for the wedding caravan, and a wreath from this plant was placed on the bride's head. 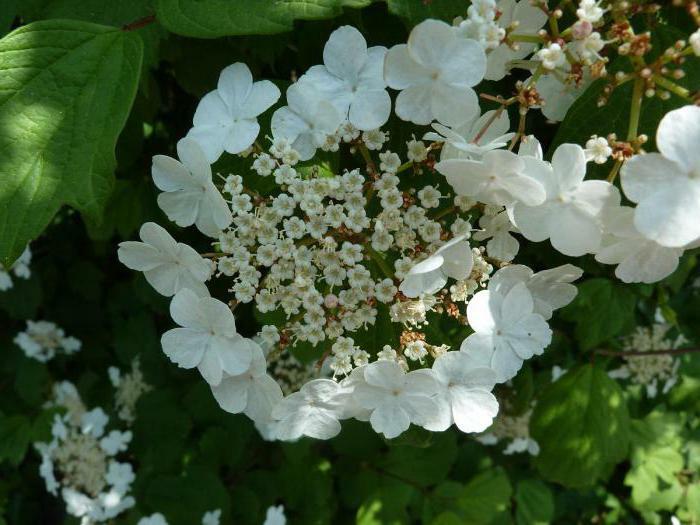 The composition of the Kalina

Nature has generously awarded this plant with the content of various chemicals. It has a lot of essential oils. The content of phytosterols and substances of the group of flavonoids, of which the Fiburnin is a representative, is noted. The composition is marked by the content of a certain amount of organic acids. There is a certain amount of vitamin C and tannins. The content of ascorbic acid products is usually associated with a lemon. But according to its amount, viburnum exceeds the lemons almost 2 times. Of minerals, viburnum is very rich in iron. This explains its use to enhance the function of hematopoiesis. This element in it contains 5 times more than in the same lemon. Vitamin composition is characterized by a high concentration of retinol( vitamin A) and vitamin E( tocopherol), which is considered a vitamin of youth. It does not allow our skin to age, preventing the formation of free radicals, their destructive effect on the skin at the cellular level. 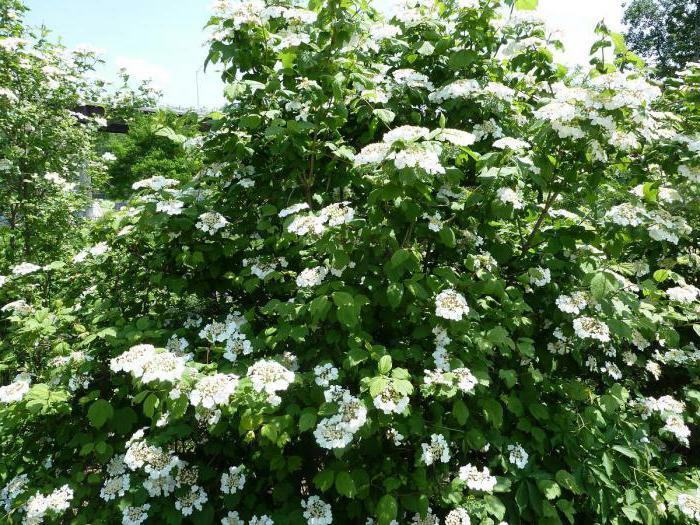 The healing properties of the flowers of the plant

So, what are the useful colors of the viburnum? The healing properties of this plant have been known for a long time. It has been successfully applied and used so far to treat many diseases. Healing properties are due to the rich chemical composition, so that the viburnum has a number of therapeutic effects. They can be reduced to the following positions: 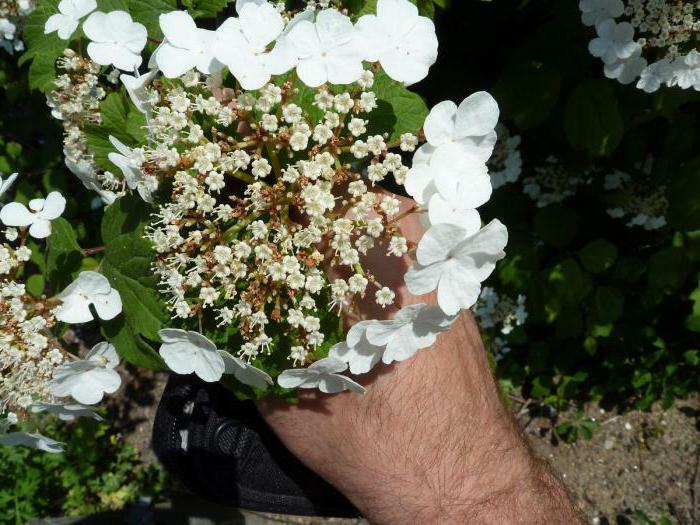 Despite the fact that the viburnum has a sufficiently large number of positive properties, it has a number of limitations to its application. They can be reduced to the following positions:

For therapeutic purposes, not only the berries of a plant, but all its other parts can be used. It is applied to the color of flowers, leaves and even bark. It is used in various forms. Can use infusions, decoctions. It prepares therapeutic teas and is used as an external remedy. The use of this plant is able to help with many pathological conditions. Of these, the most common diseases are:

Besides this the plant is an excellent immunomodulator and can lead to strengthening of immunity. Despite the fact that in nature there are more than 150 species of this shrub, only Kalina vulgaris is suitable for treatment. In our country it has a fairly wide range of growth. Before you start the treatment with viburnum, you should definitely get advice from a doctor. 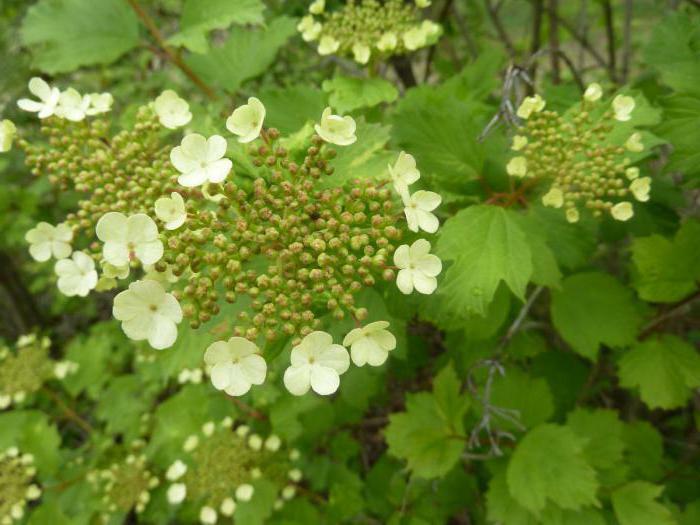 In non-traditional medicine, this plant has long been used to treat hypertension, because it has a pronounced hypotensive effect. This is due to the content in it of a large number of biological substances, which together cause a steady decrease in blood pressure.

Benefits for hypertensive patients are provided by a combination of its therapeutic effects, which in this regard have a specific specific focus. They can be reduced to the following positions:

Presence of such medicinal properties of flowers of a viburnum allows to use successfully a plant in struggle against the raised arterial pressure. 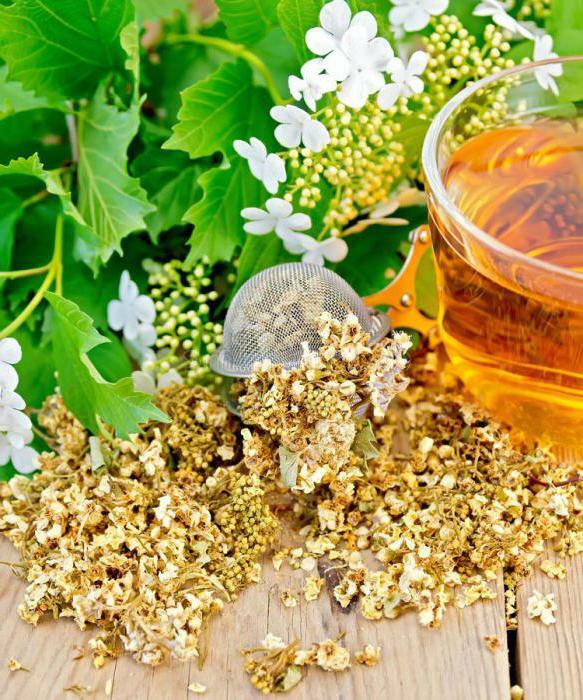 Kalina in Russia has always been considered a wedding tree. If someone from the guests gave a bouquet of viburnum to the wedding, it was considered a sign of good taste. But the viburnum is especially valued for its medicinal properties. With its application, there are many folk recipes that help in the fight against various diseases: 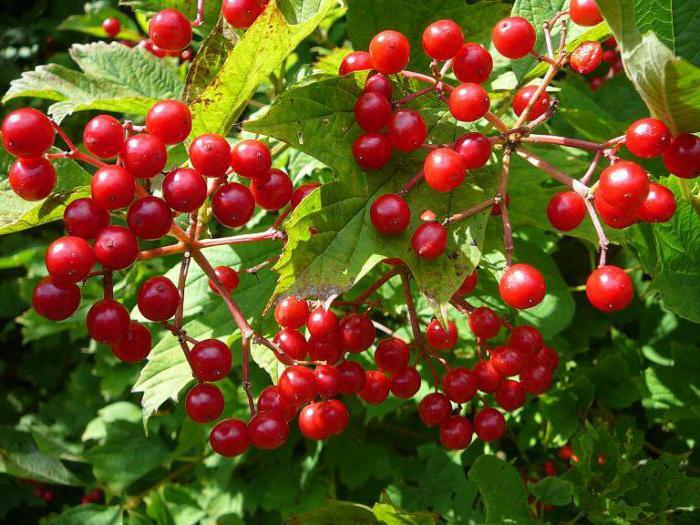 How to remove bitterness from the viburnum?

The bitter taste is a negative moment in this plant. Many even stop it when it is collected. But this is easily eliminated. Frost, drying and the use of sugar as a preservative are three factors that will help to eliminate this unpleasant quality.

Procurement and storage of raw materials

Medicinal raw materials in the form of flowers are harvested during its flowering. And it begins to bloom from the end of spring - early summer. The collection is carried out according to general rules. It is better to conduct it in dry, windless weather. Shrubs or trees to collect colors must be healthy and intact. Dry the flowers under a canopy. Dry in the open sun can not. The best place to dry is the loft, because it is well ventilated. Store the dried raw materials in paper bags or tissue bags. In plastic bags can not be stored.

Kalina is the most valuable curative natural product that is used for the therapy of various diseases. But it is not a method of choosing the treatment of a disease, but only an addition to the basic therapy. It is important to observe the dosage during treatment. All good things should be in moderation. Before starting treatment, you should always consult a doctor. Otherwise, instead of use, the body can cause irreparable harm.