Anatomy: structure and functions of the auditory analyzer

Sound waves are vibrations with a certain frequency transmitted in all three environments: liquid, solid and gaseous. For the perception and analysis of their person, there is a hearing organ - the ear, which consists of the outer, middle and inner parts, capable of receiving information and transferring it to the brain for processing. This principle of work in the human body is similar to that characteristic of the eye. The structure and functions of the visual and auditory analyzers are similar, the difference is that the hearing does not mix audio frequencies, perceives them separately, rather, even dividing different voices and sounds. In turn, the eyes combine light waves, while receiving different colors and shades. Photos of the main sections of the human ear can be seen in this article. The ear is the main organ of hearing in a person, it takes a sound and passes it on to the brain. The structure and functions of the auditory analyzer are much wider than those of the ear alone, it is a well-coordinated work of transferring impulses from the tympanic membrane to the stem and cortical areas of the brain responsible for processing the data.

The body responsible for the mechanical perception of sounds consists of three main divisions. The structure and functions of the departments of the auditory analyzer are different, but they perform one common work - the perception of sounds and their transfer to the brain for further analysis.

External ear, its features and anatomy

The first thing that meets sound waves on the way to the perception of their semantic load is the outer ear. Its anatomy is quite simple: it's an auricle and an external auditory canal, which is the connecting link between it and the middle ear. The auricle itself consists of a cartilage plate 1 mm thick, covered with perichondrium and skin, it is devoid of muscle tissue and can not move.

The lower part of the shell is the earlobe, it is a fatty tissue covered with skin and permeated with a lot of nerve endings. Smoothly and funnel-shaped shell passes into the ear canal, bounded by a goat in front and an anti-skid behind. In an adult human passage is 2.5 cm in length and 0.7-0.9 cm in diameter, it consists of the internal and membranous cartilage. It is limited by the tympanic membrane, behind which the middle ear begins. 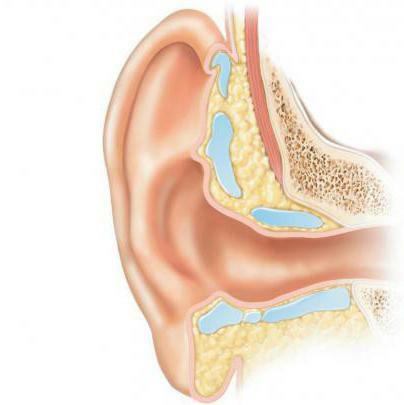 The membrane is a fibrous plate in the shape of an oval, on the surface of which it is possible to isolate such elements as the hammer, posterior and anterior folds, navel and short process. The structure and functions of the auditory analyzer, represented by a part such as the external ear and the tympanic membrane, are responsible for trapping sounds, their primary processing and transfer to the middle part.

The middle ear, its features and anatomy

The structure and functions of the auditory analyzer departments are radically different from each other, and if the anatomy of the outside is known firsthand, then the study of information about the middle and inner ear should pay more attention. The middle ear represents four air-bearing cavities connected to each other, and an anvil.

The main part that performs the basic functions of the ear is the drum cavity, combined with the nasopharyngeal auditory tube, through this hole the whole system is ventilated. The cavity itself consists of three chambers, six walls and an auditory ossicle, which in turn is represented by a hammer, an anvil and a stirrup. The structure and functions of the auditory analyzer in the middle ear region transform the sound waves from the external part into mechanical vibrations, and then transmit their fluids that fill the cavity of the inner part of the ear. 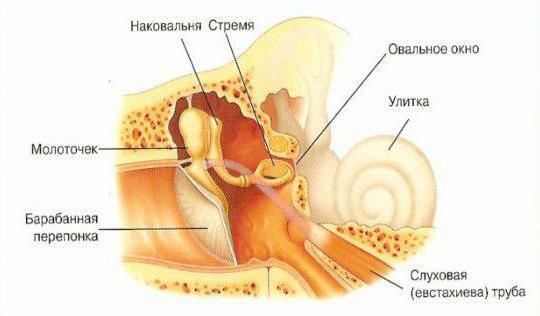 The inner ear, its features and anatomy

The inner ear represents the most complex system from all three departments of the hearing aid. It looks like a labyrinth, which is located in the thickness of the temporal bone, and represents an osseous capsule and a webbed formation included in it, which completely repeats the structure of the bone labyrinth. Conditionally, the entire ear is divided into three main parts:

Labyrinth completely repeats the structure of the bone part, and the cavity between these two systems is filled with perilymph, reminiscent of its composition, plasma and cerebrospinal fluid. In turn, the cavities in the most membranous labyrinth are filled with endolymph, which is similar in composition to the intracellular fluid.

Functionally, the inner ear function is divided into two main functions: transmission of sound frequencies to the brain and coordination of human movements. The main role in the transmission of sound to the brain is performed by a snail, different parts of which perceive vibrations with different frequencies. All these vibrations are assumed by the basilar membrane, covered with hair cells with beams of stereoliths on the apex. It is these cells that convert vibrations into electrical impulses that go to the brain through the auditory nerve. Each membrane hair has a different size and only receives a sound of a strictly defined frequency.

Principle of operation of the vestibular apparatus

The structure and functions of the auditory analyzer are not limited to the perception and processing of sounds alone, it plays an important role in the whole motor activity of a person. For the work of the vestibular apparatus, on which coordination of movements depends, correspond to the fluids that fill the part of the inner ear. The main role here is played by the endolymph, it works on the principle of a gyroscope. The slightest inclination of the head causes it to move; in turn, it forces the otoliths to move, which irritate the hairs of the ciliated epithelium. With the help of complex neural connections, all this information is transferred to the brain departments, then his work begins to coordinate and stabilize the movements and balance.

The principle of well-coordinated operation of all the ear and brain cameras, the transformation of sound vibrations into

information. The structure and functions of the auditory analyzer, which can be briefly studied above, are aimed not just at capturing the sounds of a certain frequency, but on their transformation into information understandable by the human mind. All work on transformation consists of the following main stages:

What worked out and ideal would not be the work of all parts of the ear, everything would be meaningless without the functions and work of the brain, which transforms all sound waves into information and guidance to action. The first thing that the sound meets on its way is the auditory cortex, located in the upper temporal gyrus of the brain. Here are the neurons, which are responsible for the perception and separation of all ranges of sound. If, due to any damage to the brain, for example, a stroke, these departments are damaged, then a person may become hard of hearing or even lose hearing and the ability to perceive speech.

Age changes and features in the work of the

hearing analyzer As the age of a person changes, the work of all systems changes, the structure, functions and age-specific features of the auditory analyzer are no exception. In people aged, often there is a decrease in hearing, which is usually considered physiological, that is, normal. This is not considered a disease, but only an age-related change called persbiakusis, which should not be treated, but can only be corrected with the help of special hearing aids.

There are a number of reasons why hearing loss can occur in people who have reached a certain age threshold:

In addition to normal functional changes in a healthy person, problems can be exacerbated by complications and consequences of transferred otitis, they can leave scars on the eardrum that provoke problems in the future. 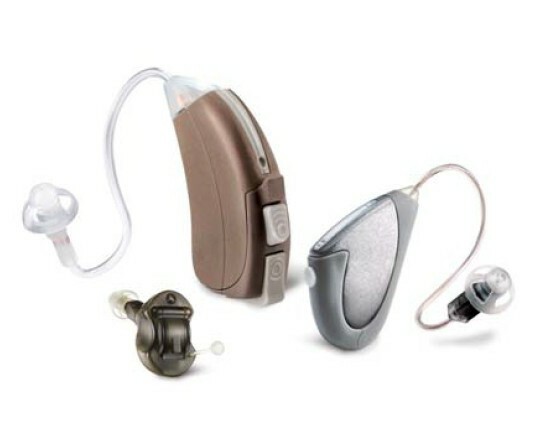 After medical scientists have studied such an important organ as the auditory analyzer( structure and functions), deafness caused by age has ceased to be a global problem. Hearing aids, aimed at improving and optimizing the work of each of the departments of the system, help the elderly to live a full life.

Hygiene and care of the hearing organs of a person

To keep your ears healthy, they need a timely and accurate care for them, as well as for the whole body. But, paradoxically, in half the cases, problems arise precisely because of excessive care, and not because of its lack. The main reason is the inefficient use of ear sticks or other means for mechanical cleaning of accumulated sulfur, seizure of the drum septum, its scratches and the possibility of accidental perforation. To avoid such injuries, only the outer part of the passage should be cleaned without using sharp objects. 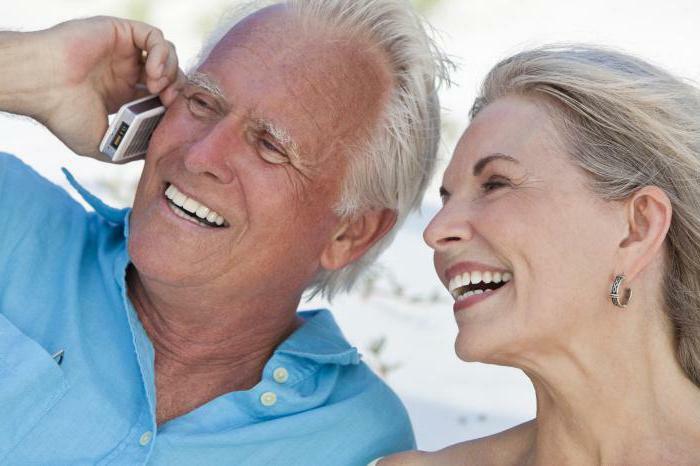 To keep your hearing in the future, it's better to stick to safety rules:

Understanding the principles of the operation of the auditory analyzer, adherence to hygiene and safety rules at home or at work will help to maintain hearing and not face the problem of its loss in the future.