"Esomeprazole" is a drug belonging to organotropic gastrointestinal medicines. The drug has antiulcer action and is a proton pump inhibitor. 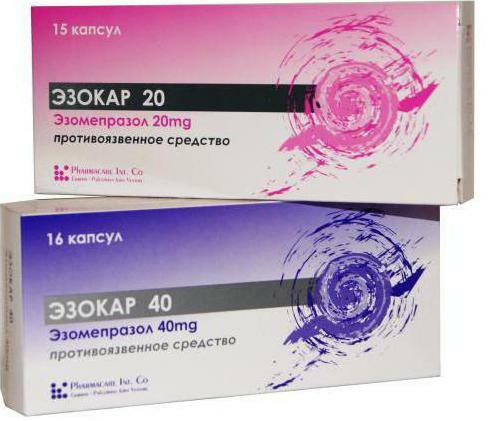 Composition, form of the preparation "Esomeprazole"

The drug is available in the form of tablets with a dosage of 20 and 40 mg of the active component of esomeprazole, as well as in the form of a powder intended for the preparation of a solution for injection( 40 mg bottle).The tablets are coated with a membrane, the dissolution of which occurs in the intestine.

Pharmacological action of the drug "Esomeprazole"

What is the drug "Esomeprazole"?The instructions for use show that this antiulcer, which, being a weak base, takes an active form after it enters the stomach."Esomeprazole" inhibits the action of the enzyme H + -K + -ATPase, as well as the secretion of hydrochloric acid( stimulated, basal).The necessary action occurs one hour after the drug is used. When the "Esomeprazole" is taken daily for five days, with an allowable daily dose of 20 mg, after the stimulation with pentagastrin, the maximum level of hydrochloric acid is significantly reduced( by approximately 90%).

"Esomeprazole" instructions for use is a preparation that penetrates into the body quickly and well absorbed, binds to proteins almost 100%( 97%).Bioavailability increases with repeated use of the drug from 64 to 89%.The medication takes the form of metabolites and is excreted from the body mainly with urine, a small part of it is present in the feces. 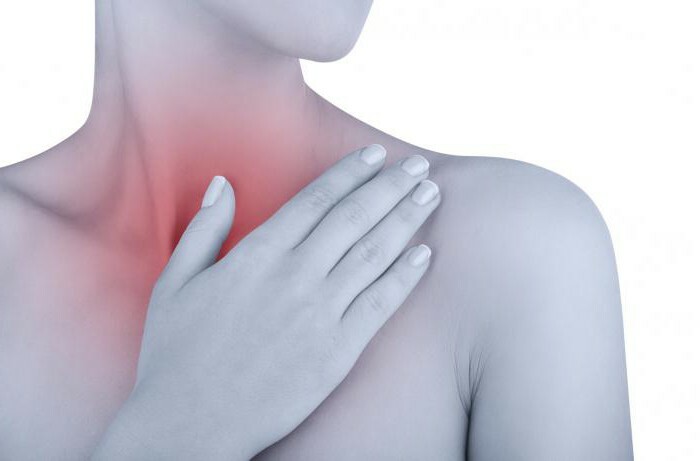 Indications for the use of the drug "Esomeprazole"

"Esomeprazole", analogs are prescribed for patients with gastroesophageal reflux disease for the treatment and prevention of exacerbations. This tool is used in the complex therapy of ulcers of the duodenum or stomach, for the prevention of the disease that has arisen as a result of NSAID administration.

The drug is used in a peptic ulcer when the duodenum or stomach is affected. It can be used for patients who have been treated with esophagitis, with prolonged prevention of relapses. It is acceptable to use the combination of "Esomeprazol" with antibacterial preparations. Tablets and solution for injections as part of complex therapy in this case can destroy Helicobacter pylori.

Contraindications to the use of the drug "Esomeprazole"

Contraindications include age of less than twelve years, increased sensitivity to esomeprazole, the period of breastfeeding. The consequences of treatment with the drug during pregnancy are not established.

The drug is used in a daily dose of 20-40 mg. The duration of therapy is determined by the indications, the treatment regimen and the effectiveness of the medication "Esomeprazole".Tablets and solution for severe renal failure are used at a maximum dose of 20 mg. 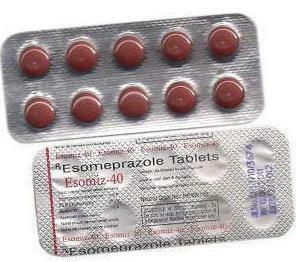 Erosive reflux esophagitis is treated for four weeks using a daily dose of 40 mg. With long-term prophylaxis of relapses based on the administration of funds by patients who have been treated with esophagitis, the daily dose is set at 20 mg.

In the treatment of reflux esophagitis, aimed at eliminating the main symptoms of the disease, take 20 mg of the drug "Esomeprazole".Preparations in the form of tablets and powder are used to kill H. Pylori, when there is a connection with the ulcer of duodenal ulcer, in the combination therapy - "Esomeprazole"( 20 mg), "Clarithromycin( 500 mg)," Amoxicillin "(1 g).All medicines are taken twice a day.

Gastric ulcers caused by the use of NSAIDs are recommended to treat 20 mg of "Esomeprazole" per day. The necessary dose is always prescribed by the doctor taking into account the patient's health condition, illness, severity of its course and other important factors. Side effects of the drug "Esomeprazole"

Patients who take these drugs for a long time are more prone to form glandular cysts in the stomach than other patients. Of frequent negative manifestations of the body during the treatment with the drug "Esomeprazole" the instruction for use highlights a headache and some negative reactions from the digestive tract, namely: constipation, flatulence, diarrhea, nausea with vomiting, and the presence of pain in the abdomen. Rare side effects include drying out of the oral mucosa, dizziness, urticaria, skin itching, dermatitis. Other reactions are possible, so treatment should be performed strictly under the supervision of a specialist. 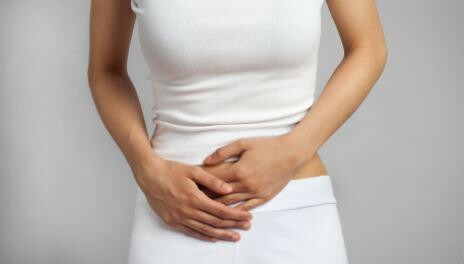 Overdose is accompanied by general weakness, increased manifestation of side effects, including the gastrointestinal tract. In such cases, treatment is performed by eliminating symptoms of overdose and maintenance therapy. Dialysis practically does not have the necessary effect, there are no antidotes.

Pregnant women "Esomeprazole", the analogs are prescribed with extreme caution. Treatment during pregnancy should be done under the supervision of a doctor. Pregnant women are prescribed the drug only in those cases when the positive effect on their body significantly exceeds the possible harm for the unborn child. There is no reliable information about the effect of the drug on the embryo, if possible, it is necessary to avoid treatment with this medication. Use the drug "Esomeprazole" when breast-feeding a child is prohibited.

In case of violations of the liver, the excess of the established dose is dangerous for health( in the event that these violations are severe).

When the patient has signaling symptoms such as hematemesis, dysphagia, nausea, a significant decrease in body weight, during the period of treatment with "Esomeprazole" in order to eliminate the ulcer or as a result of taking the drug in case of suspected disease, malignancy should be excluded. To identify malignant tumors, it is necessary to conduct an appropriate study.

Patients who have insufficiency of isomaltase sucrose, intolerance to fructose of a hereditary nature, are prohibited from prescribing "Esomeprazole", synonyms.

Interaction of "Esomeprazole" with other drugs

With the simultaneous use of the drug with "Citalopram", "Clomipramine", "Imipramine", the enhanced effect of these agents is possible, an increase in the level of active substance in the blood. When used in conjunction with "Esomeprazol", the effectiveness of "ketoconazole", "Itraconazole" decreases, their absorption worsens. 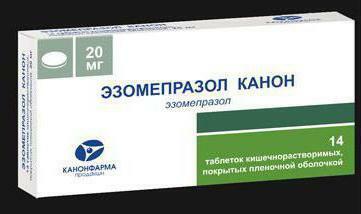 When combining "Esomeprazole" with "Atazanavir" there is a significant decrease in the exposure of this medication."Esomeprazole" instructions for use do not recommend the use simultaneously with "Phenytoin", "Clomipramine", "Imipramine" and such medications as "Citalopram", "Diazepam", "Nelfinavir" and "Atazanavir."The level of these drugs in the blood can increase, so there may be a need to reduce their dose. The concomitant use of "Esomeprazole" and the means "Clarithromycin" leads to a significant change in the exposure of "Esomeprazole", there is an increase associated with the inhibition of the metabolism of this drug. Before using, you should carefully study the tool for the preparation and consult with a specialist.

The cost of the drug, reviews about the drug "Esomeprazole"

The drug is mainly purchased in the form of tablets. In pharmacies "Esomeprazol" can be found under the trade names "Nexium" and "Emanera".When buying the drug "Esomeprazole" the price depends on the dose of the active substance in its composition. The cost of the drug with a dosage of 20 mg( "Emanera") is approximately 500 rubles.for 28 tablets and is determined by the manufacturer. Medication with a dose of the active ingredient 40 mg( "Nexium", 28 tablets) can be purchased for 3000 rubles.

"Esomeprazole" reviews are mostly positive. They noted the property of the drug to inhibit the secretion of hydrochloric acid, both basal and stimulated. The drug showed high efficiency in the treatment of conditions that correspond to the indications specified in the instructions. During the period of therapy with this drug, there is little chance of side effects. Not everyone can easily find the drug in pharmacies, some patients who have been prescribed "Esomeprazole", the price seems high. 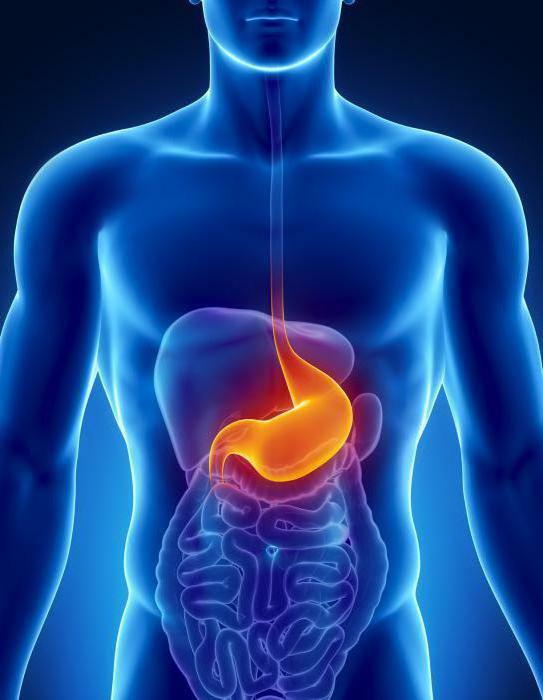 Those who took the medicine on the prescription of a doctor after an accurate diagnosis and at the recommended dose, note a significant improvement in well-being. As the reviews show, "Nexium" is more popular among patients than "Emanera".With a stomach ulcer, "Nexium" provides the appearance of the desired result about one month after the start of therapy. Improvement of the condition can be observed after 1.5 weeks of treatment. Side effects occur very rarely. The drug "Nexium" is effective, it helps when eliminating the conditions specified in the instructions. For the result to be positive, you must complete the entire course and fully adhere to the doctor's recommendations.

The following variants can be distinguished from the analogues of the preparation:

All of these drugs have a similar effect, but differ in their cost. 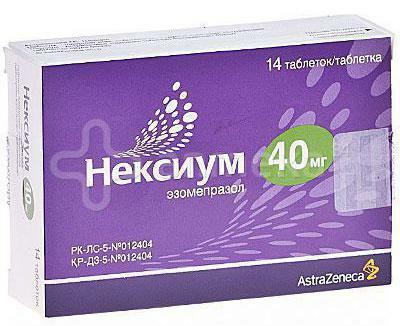 "Rabeprazole" and "Esomeprazol" have a similar chemical composition, they treat the same diseases. But experts believe that some diseases, for example gastroesophageal reflux disease, "Rabeprazole" eliminates more effectively, it better removes symptoms, contributes to the rapid restoration of the esophagus. The absence of a positive effect in the treatment of "Esomeprazole" may be associated with the individual characteristics of the body.

If necessary, choose an analogue should consult a doctor. Take care of your health and go through the examination on time, then the recovery will be more rapid, and many complications will be avoided.