"Cardosal"( internationally known as "Olmesartan medoxomil") is an antagonist of angiotensin II receptor( type AT1), the primary vasoactive hormone RAAS, which is related to the development of essential hypertension. 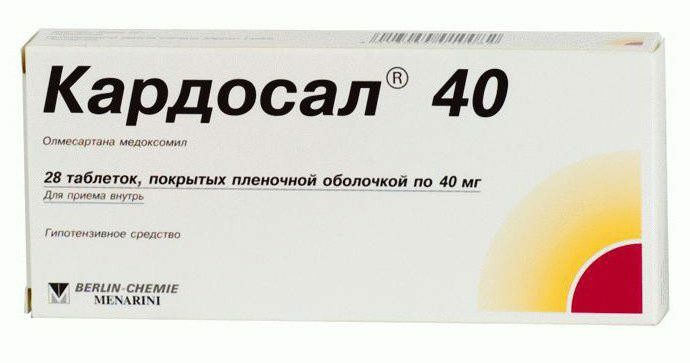 Form of medicine, its components

The drug is available in tablets that are coated. The main substance, which is used in the drug is medoxomil olmesartana, the tablet contains 10 to 40 mg( Cardosal 10, Cardosal 20, Cardosal 40).

Additionally, magnesium stearate, microcrystalline cellulose, lactose monohydrate are added to the formulation. Also, giprolose and low-substituted giprolose are used as auxiliary components. The shell is created from titanium dioxide with the addition of talc and hypromellose.

It is assumed that the drug "Cardosal", affecting the body, helps block the effects of angiotensin II mediated by AT1 receptors. When hypertension drug reduces arterial pressure, this effect persists for a long time. There are no data confirming the occurrence of hypotension after the first use of the initial dose of medication and tachycardia due to prolonged therapy( Cardosal 20, Cardosal 40), the appearance of withdrawal syndrome, accompanied by a sharp increase in blood pressure.

The use of medication once a day leads to a gentle decrease in blood pressure. The necessary effect develops within 24 hours. Usually, the hypotensive effect is achieved on the fourteenth day of treatment, the maximum result is observed after the therapy lasting about two months.

Absorption of the preparation, its distribution

The soaking tablet quickly takes the form of a pharmacologically active metabolite in the intestine( due to the action of the enzymes) and in portal blood( during absorption from the gastrointestinal tract).

During therapy in the composition of blood plasma, the active substance is not detected in an unchanged form. The average bioavailability is about 26%.The maximum level of the drug is found on average two hours after its adoption, with increasing dosage( single dose of 80 mg) it increases.

"Cardosal 40", as well as preparations with a different dosage of the active ingredient, can be taken without being guided by the time of eating. Food intake has almost no effect on bioavailability. 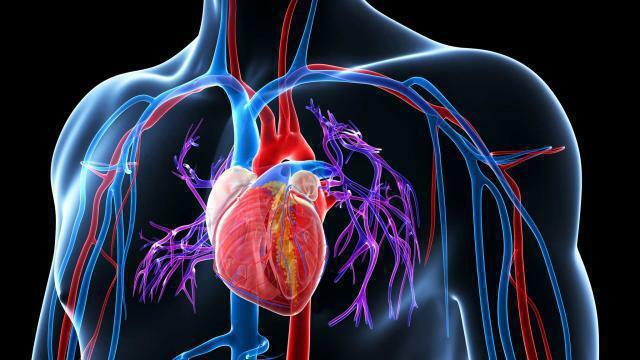 The association with plasma proteins is almost complete and corresponds to 99.7%.However, with the simultaneous use of Cardosal with other highly-linked medicines, it is significantly reduced.

Metabolism of the drug, its excretion from the body

Basically, the medicine is excreted by the liver( 60%), the rest( 40%) by the kidneys. Intrahepatic circulation of the active substance is insignificant. Since excretion is performed mainly by the liver, treatment with Cardosal Plus is prohibited if the patient has obstructed bile ducts. After repeated use, the medication is partially excreted on average over 12 hours. A good effect is observed after taking the drug in dosage, which corresponds to several doses of "Cardosal".A significant effect is present after fourteen days of therapy, further cumulation does not occur. At a rate such as renal clearance, does not affect the different dosage of the drug, it is in the range from 0.5 to 0.7 l / h( approximately).

In those patients who have been found to have impaired renal function( mild, moderate, severe), AUC increases by 62, 82 and 179% when the condition is stable.

In case of problems with the liver, expressed slightly and moderately, a single administration of the drug promotes an AUC increase of 6 and 65%.

The use of Cardosal means application instructions allow to produce if essential arterial hypertension is detected.

To be treated with Cardosal during pregnancy is unacceptable. If pregnancy occurs during the therapy, it is necessary to cancel the drug.

Due to the lack of data confirming the safety of breastfeeding treatment, breast feeding is stopped for the duration of treatment. 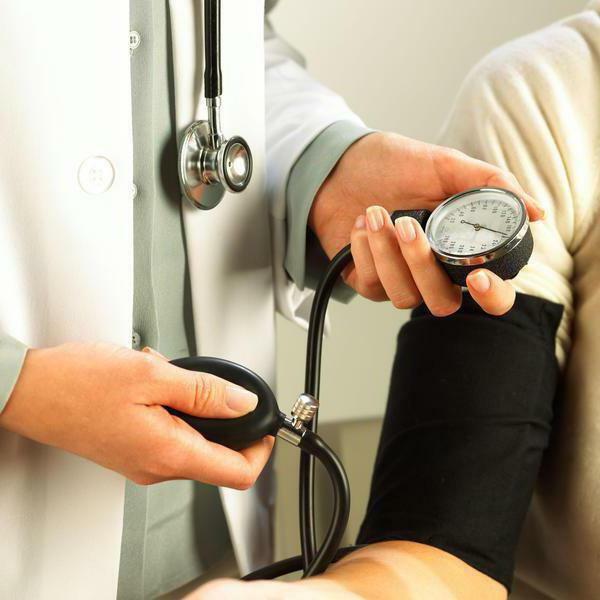 To be able to purchase Cardosal and begin treatment with it, the doctor must prescribe a prescription.

Contraindications include hypersensitivity to those substances that are included in the drug, children's age( less than 18 years), pregnancy, breastfeeding. In addition, tablets are not prescribed in the following cases:

"Cardosal" is a medicine that is prescribed with special care to patients with such conditions:

"Cardosal" instruction manual recommends the use of 10 mg, which corresponds to the initial dose. If there is insufficient normalization of blood pressure per day, you need to take 20 mg of the drug. Exceeding the dose of 40 mg of the drug per day is unacceptable. Every day the medicine should be drunk once, at the same time. For patients who have mild or moderate kidney problems, when clearance is between 20 and 60 ml / min, the maximum dose of Cardosal can not be more than 20 mg. In cases where there is a need for strengthening the effect obtained, complex treatment is performed( except for "Cardosal", "Hydrochlorothiazide" is used). 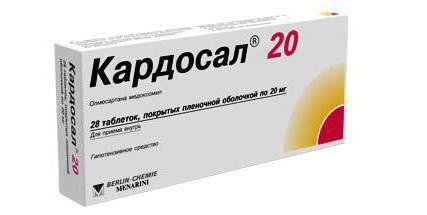 In the treatment with Cardosal, the instruction manual allows for such side effects:

To side effects that occur very rarely after taking Cardosal medication, the instructions for use include:

Overdose is possible, it is manifested by a marked decrease in blood pressure. In the case of such a result of treatment, regular monitoring of the patient is required. To eliminate symptoms accompanied by an overdose with Cardosal, doctors' recommendations recommend performing symptomatic treatment, as well as maintenance therapy to normalize blood pressure. In case of an overdose, the patient is put on his back and raised his legs. In addition, when using a large dose of the drug is recommended to perform gastric lavage, give the person activated charcoal. There is a need for replenishment of BCC, elimination of dehydration and restoration of water-salt balance. Data on the possibility of removing the substance olmesartan medoxomil from the body by dialysis is not available.

Patients who were intensively treated with diuretics and followed a diet that excludes salt intake before the start of therapy may develop hypotension due to the use of the first dose of the drug. The same result can be observed in patients who experienced vomiting or diarrhea. The reason for such an organism reaction is a decrease in bcc. A side effect of this nature should be prevented. The risk of its appearance should be considered before starting therapy.

If a person has impaired renal function, it is important to periodically check in the serum of blood such indicators as the level of creatinine, potassium. The use of ACE inhibitors in patients who have been diagnosed with hyperaldosteronism( primary) is meaningless, so they are not prescribed Cardosal( reviews show no response to ACE inhibitors).

It should be taken into account that a strong decrease in blood pressure in patients with atherosclerosis, which affects the cerebral vessels, or with IHD, can lead to the development of such dangerous conditions as ischemic stroke or myocardial infarction.

If a person has to perform maintenance of technically complex machinery or drive a vehicle, it is important to know that taking Cardosal can cause deterioration of well-being( fast fatigue, weakness, dizziness), although this happens rarely. 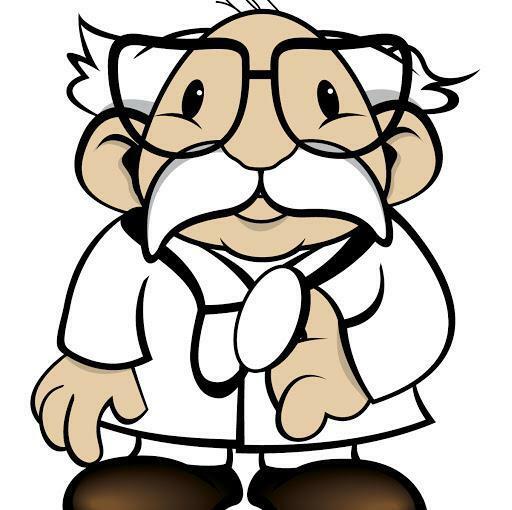 Due to the content of lactose in the medicament, its administration is prohibited to patients with inherent galactose intolerance. The same applies to patients with the syndrome of malabsorption of galactose and glucose, a deficiency in the body of lactase.

The doctor must prescribe a prescription and find out if the patient is being treated by other means to prevent unwanted reactions of the body. It is not recommended to simultaneously use Cardosal and the following types of medications:

An example of such a tool is "Heparin".It is able to influence the content of potassium in the blood. With the impossibility of treatment with the drug "Cardosal", analogs are given the opportunity to replace it.

Strengthening antihypertensive effect is observed when including other antihypertensive drugs and NSAIDs in the therapy, that is, when implementing complex treatment. Therapy with a complex approach includes the use of inhibitors of COX-2, acetylsalicylic acid( daily dose - more than 3 g).The action of angiotensin II receptor antagonists can occur synergistically, affecting glomerular filtration by decreasing it.

With concomitant use of medications such as angiotensin II receptor antagonists and NSAIDs, there is a possibility that the patient develops acute renal failure. For this reason, monitoring the state of the kidneys at the initial stage of therapy should be carried out regularly. With this treatment, you must always take enough fluids. However, it is possible to reduce the severity of antihypertensive action, resulting in a frequent deterioration in the effectiveness of therapy.

If "Cardosal" is used during the treatment with antacids, namely aluminum hydroxide and magnesium hydroxide, there is a risk of lower bioavailability of the active substance( moderate). 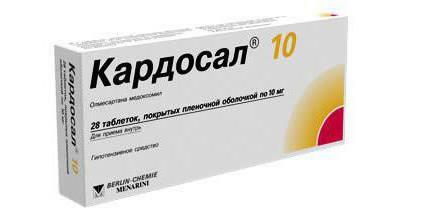 It has been reported that the level of lithium in the blood serum is reversibly enlarged and the toxic properties are reflected as a result of the combined use of ACE inhibitors, angiotensin II receptor antagonists and agents containing lithium. In connection with such reports, the combined treatment of Cardosal and preparations, one of the components of which is lithium, is not recommended. However, if such a need exists, control of the blood composition should be regular.

When appointing "Cardosal" tablets, the price suits not all patients, so they are interested in the possibility of treatment with the use of another, more profitable means."Cardosal" with 10 mg of the active ingredient can be purchased for 610 rubles. A drug containing 20 mg of active ingredient - for 756 rubles."Cardosal", whose price is about 860 rubles., Contains 40 mg of the main component.

As an analogue, when you need to choose another means for the implementation of therapy, instead of "Cardosal" you can apply the medicine "Olimestra" or perform a combined treatment based on the use of "Hydrochlorothiazide", "Medoxomil Olmesartana".You can use such analogues as "Lozarel" or "Cosaar".In addition, the drugs "Nortivan", "Valsartan Zentiva" are suitable for replacement.

It is known about such preparations as "Olmesar", "Plaunak".Typically, substitutes differ from the original means, one of the differences is the affordable price and reduced bioavailability, so they are considered less effective, although they can cope with their task.

Analogs are always used under the constant supervision of a specialist, it is necessary to regularly check blood pressure. If you need to choose an analogue to the "Cardosal", than to replace this drug, the doctor decides, taking into account the different moments. If there are side effects in the treatment period, the analogue should take the necessary actions in time to eliminate them. During therapy, it is necessary to check the effect on the body.

When you can not do without replacing the original remedy, it is worth giving preference to medicines manufactured by proven European companies. When planning to replace the tablets "Cardosal", analogues should be chosen only the highest quality.

Reviews left on the forums by doctors and patients show that the drug "Cardosal" during the treatment often causes negative reactions of the body, the most common of which are chest pain and permanent weakness. But despite these unpleasant moments, hypotensive action is always excellent. The occurrence of side effects requires a specialist to seek advice and, possibly, a change in the treatment regimen. 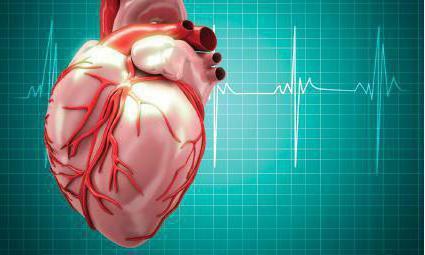 In the treatment of patients who have been diagnosed with hypertension, it is important to provide the patient with constant monitoring. The implementation of therapy, thus, will allow to obtain the necessary effect and to monitor the state of the organism, and in case of detection of violations - in time to eliminate them. An integrated approach is important, only medical treatment is not enough, we still need to select a special diet. Among the necessary conditions for therapy is observance of a sparing regimen of work, getting rid of bad habits, limiting physical exertion and observing other advice that the doctor has proposed for the best result of treatment.