Burns: area burns, determination by the rule of the palm. Classification of burns by area and degree of injury

In life, each of us received burns. The area of ​​burns can be different, but the sensations are always the same: as if the burned coal is applied to the affected area. And no water, ice or cold compress can overpower this feeling.

And from a medical point of view, a burn is tissue damage caused by the action of high temperature or highly active chemicals, for example acids, alkalis, heavy metal salts. The severity of the condition is determined by the depth of damage and the area of ​​the damaged tissue. There are special forms of burns, obtained from radiation or electric shock. 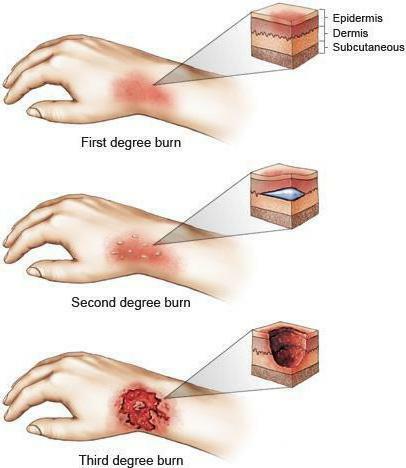 Classification of burns is based on the depth and type of damage, but there is a separation according to clinical manifestations, medical tactics or the type of injury.

In depth, burns are distinguished:

Classification of burns by type of damage:

Everyone who has ever received burns( the area of ​​burns was more than a five-ruble coin) knows that the prognosis of the development of the disease is an important detail in the diagnosis. Often patients with injuries are injured in accidents, natural disasters or as a result of emergencies at work. Therefore, people in the waiting room brought in groups. And then the ability to predict a change in the patient's future condition will come in handy during sorting. The most difficult and complex cases should be considered by doctors in the first place, because sometimes the account goes for hours and minutes. Usually the forecast is based on the area of ​​the damaged surface and the depth of the lesion, as well as the concomitant injuries.

To accurately determine the forecast, conditional indexes are used( for example, the Frank index).To do this, for each percentage of the affected area is assigned from one to four points. It depends on the extent and location of the burn, and also on what the burn area of ​​the upper respiratory tract. If there is no breathing, then the head and neck burn gets 15 points, and if there is, then all 30. And then they count all the estimates. There is a scale:

- less than 30 points - favorable outlook;
- from thirty to sixty - conditionally favorable;
- up to ninety - doubtful;
- more than ninety - unfavorable. 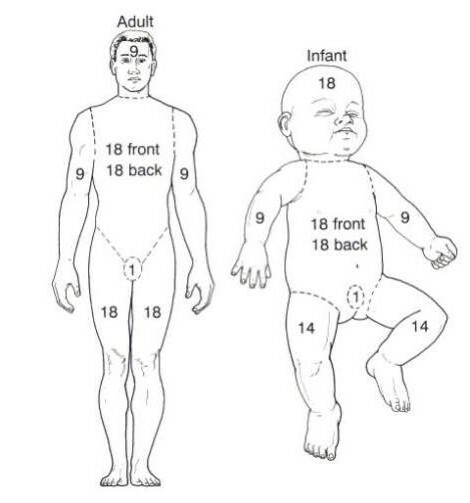 In medicine, there are several ways to calculate the area of ​​the affected surface. Determination of the area and degree of burn is possible if one takes as a rule that the surface of different parts of the body occupies nine percent of the total area of ​​the skin, according to this, the head along with the neck, chest, abdomen, each arm, hips, shins and feet occupy 9%and the back surface of the body is twice as large( 18%).The perineum and the genitals received only one percent, but these injuries are considered quite severe.

There are other rules for determining the area of ​​burns, for example, using the palm. It is known that the area of ​​the palm of a person takes from one to one and a half percent of the entire surface of the body. This allows us to conditionally determine the size of the damaged area and assume the severity of the condition. Percentages of burns on the body are conditional. They depend on the subjective evaluation of the doctor. 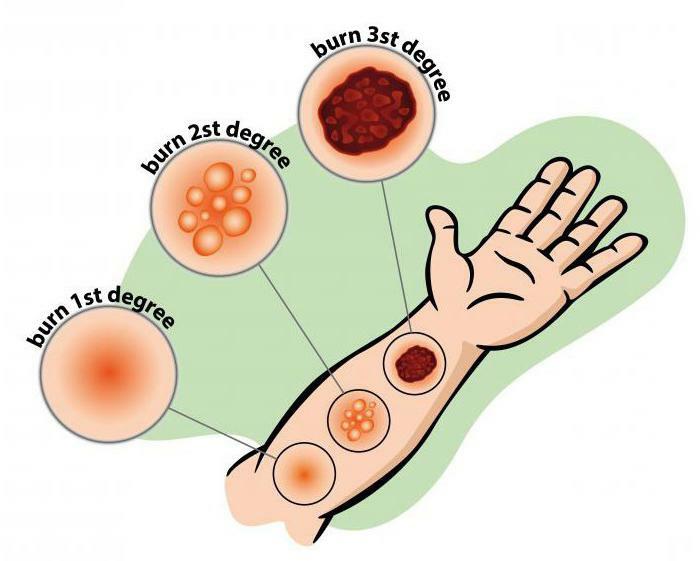 Clinic There are several symptoms that burns can manifest. The area of ​​burns in this case does not play a special role, because they are extensive, but shallow. Over time, forms of clinical manifestations can change into each other during healing:

This is the systemic response of the body to a burn injury. This condition can occur both in case of superficial injuries, if the body burns 30% or more, and with deep burns occupying not more than ten percent. The weaker the health of a person, the stronger this type of shock is. Pathophysiologists distinguish four stages of the development of a burn disease: 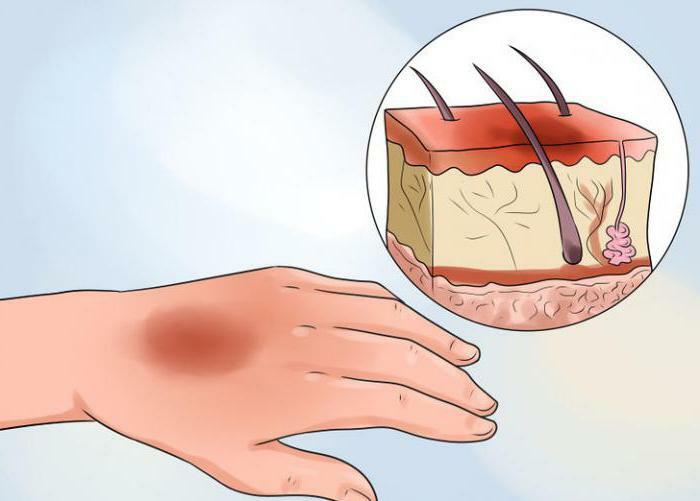 The body burn is accompanied by poisoning the body with protein denaturation products. The liver and kidneys are almost unable to cope with the increased load with a decrease in pressure in the systemic circulation. In addition, after trauma, human immunity is in a state of high alertness, but long-term poisoning of the body disrupts the mechanisms of protection, and secondary immunodeficiency is formed. This leads to the fact that the wound surface is colonized by putrefactive microflora.

Sorting of victims with burns 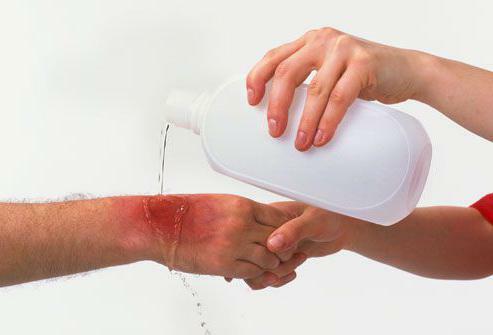 As mentioned above, one victim who has burns is rarely brought to the emergency room. The area of ​​burns and the number of patients significantly exceed the capabilities of medical personnel, so it is necessary to sort out the incoming people for the severity of the condition in order to know who to provide medical care first: 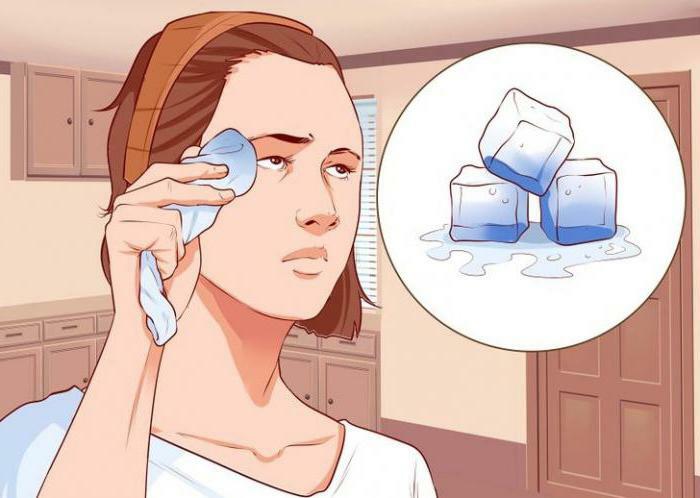 For a good prediction, the rendering of self- and mutual assistance plays a big role. The rapidity of the reaction can significantly reduce the burn area and its depth. First of all, it is necessary to interrupt the contact between the traumatizing agent and the person, for example to put out the fire or to de-energize the network, to wash out / neutralize the chemical reagent.

At the pre-hospital stage, it is not recommended to use oil-based ointments and other fat-containing products, since they form a film on the wound surface and do not allow heat to escape. In addition, the hospital will also have to remove "medical pollution", causing pain to the victim. It is not necessary to perform wound treatment at home, such as removing foreign bodies, particles of charred skin and the like. This can lead to infection, because the proper aseptic / antiseptic regimen will not be followed. Plus, without proper pain relief, the person you are trying to help with will most likely fall into a state of painful shock.

Depending on the severity of the patient's condition, the anesthetist selects the appropriate medication and anesthesia technique. These can be non-steroidal anti-inflammatory drugs, analgesics-antipyretic drugs or local conductive anesthesia. For severe cases, narcotic analgesics are suitable.

After the place of injury is anesthetized, the surgeon proceeds to the primary treatment of the wound surface. It exfoliates the epidermis, opens or drains the blisters, removes foreign bodies. Then the cleaned surface of the wound is closed with a clean gauze dressing. For second- and more-severe burns, the patient must be injected with tetanus toxoid serum. 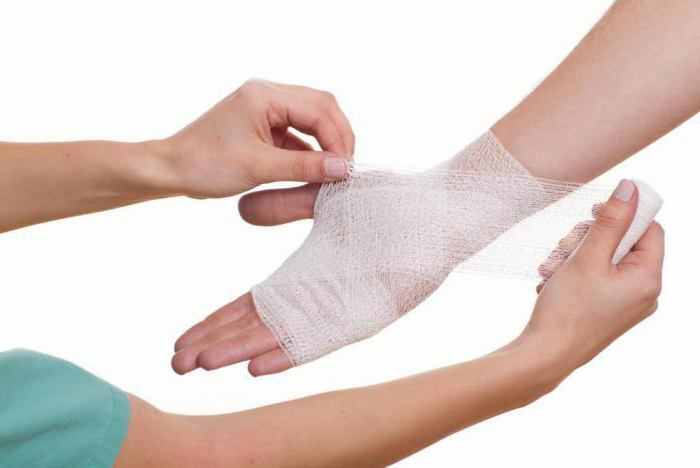 There are two methods of treating burns - closed and open. They can be used both individually and together. To prevent infection of the wound, it is actively dried to dry necrosis. An open method is based on this. On the wound surface, substances such as alcohol solutions of halogens, which can coagulate proteins, are applied. In addition, physiotherapy techniques such as infrared radiation can be used.

Closed treatment implies the presence of bandages that prevent the ingress of bacteria, and drains provide the outflow of fluid. Under the dressing, drugs are applied that contribute to the granulation of the wound, improve the outflow of fluid and have antiseptic properties. Most often for this method, antibiotics of a wide spectrum are used, which have a complex effect.