The treatment of various bacterial diseases is characterized by the use of antibiotics. But in recent years, microorganisms are becoming more resistant to such drugs. Therefore, new generation drugs are being created, more effective than those already known. Veterinary care also tries to use new developments. After all, often the disease in humans and animals is the same, so they need medicines similar.

One of the most effective recently was the veterinary drug "Kobaktan".Instruction for use describes it as an antibiotic of the last generation, free from many disadvantages of old medicines. It is used most often for the treatment of various infectious and inflammatory diseases of farm animals. But the fact that the drug almost does not cause side effects and is easily tolerated, allows it to be used in cats and dogs.

Instruction for use describes it as an antibiotic group of cephalosporins. This is the first representative of the 4th generation of these antibiotics. 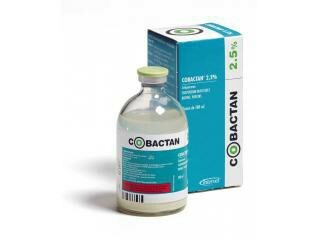 The drug is available in hermetically sealed bottles of 50 and 100 ml and is an opaque oily suspension of white color. The main active substance of the drug is cefkin. In 1 ml of the drug it contains 25 mg. It is there in the form of cefkinom sulfate. In addition, as an auxiliary component, the preparation contains ethyl oleate.

Features of the active substance

Recently, many microorganisms have begun to adapt to antibacterial drugs. They began to produce beta-lactamase, an enzyme that destroys antibiotic molecules. Bacteria began to change so that drugs became more difficult to penetrate inside. Therefore, antibiotics of the last generation are more resistant to the effects of beta-lactamases.

One of them is "Kobaktan".Entering into its composition cefkinoma sulfate easily penetrates the cell wall of any microorganisms due to its bipolar structure. To influence the bacteria is a small concentration of the drug, so it has low toxicity. The benefits of "Kobaktan" also include the cure of not only the underlying disease, but also the concomitant infections and inflammations. Therefore, it is the drug of choice in difficult cases, with inefficacy of other antibiotics, and also when it is impossible to establish the cause of the disease precisely. 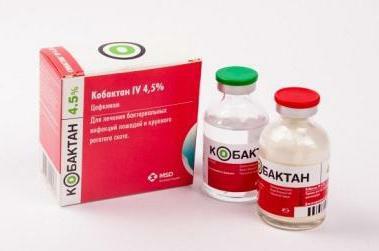 Cefkin is active against most Gram-positive and Gram-negative bacteria, as well as anaerobic microorganisms: salmonella, staphylococcus, streptococcus and others. Even those that are insensitive to other antibiotics are killed under its influence. This is due to the special effect of cefkinoma on the bacterial cell walls - it disrupts their synthesis and destroys the cell membranes. Because of this, microorganisms quickly die, not having time to adapt to the drug. Therefore, it is active against beta-lactamases and penicillinase.

The main active substance "Kobaktan" is quickly distributed in all tissues of the body. Especially a lot of it penetrates into the bronchi and lungs. Within a few minutes the drug begins to act. And the therapeutic concentration of cefkinoma persists for a day.

The drug is excreted by the kidneys in an almost unchanged form, as it binds poorly to plasma proteins. In addition, the positive properties of cefkinoma is that it does not enter the gastrointestinal tract and therefore does not cause dysbiosis.

Most often, the treatment of animals with this drug occurs on farms and other agricultural enterprises. 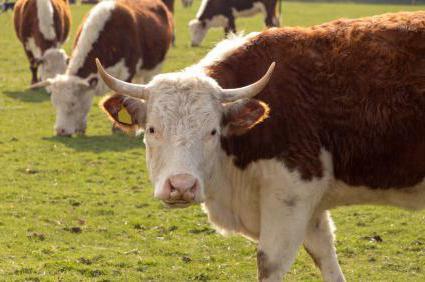 Very effective "Kobaktan" in such diseases:

But recently the drug has become popular in urban veterinary clinics. And quite often apply "Kobaktan" for cats and dogs. Particularly useful is its use in severe infections in which other antibiotics do not help:

- dermatitis, erysipelas and other skin diseases. 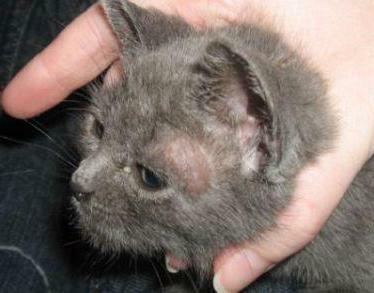 Can all "Cobaktan" be given to all animals? Instructions for use notes that the side effects of the drug does not cause and is tolerated quite well by any animals. Even an accidental overdose does not lead to negative consequences. In addition, "Kobaktan" does not contain preservatives and other additives, so it rarely causes allergic reactions. But all the same, owners of pets should use this medicine only as prescribed by the doctor. It is forbidden to treat animals that are sensitive to beta-lactam antibiotics and cephalosporins, with the drug Kobaktan. In some cases, a local reaction to an injection in the form of edema of the tissues, which takes place in a couple of weeks, may develop.

The drug is administered intramuscularly once a day. Cattle are prescribed 2 ml of medication per 50 kg of weight. In some cases, for example when treating pigs or horses, the dose may be 2 ml per 25 kg of animal weight. It takes 3-5 days for the drug to cope with the infection. Treatment should be carried out strictly according to the instructions, without missing a single injection. 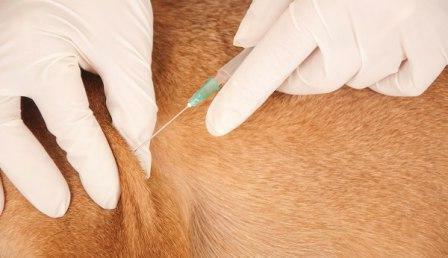 It is advisable to do the injection deeply in the muscle tissue. Veterinary care for pets can be provided in special clinics. After examining the animal, the doctor prescribes injections of the drug. Most often the dosage for cats and dogs is: 0.5 ml per 5 kg of body weight.

Very often in the treatment of bacterial infections veterinarians appoint "Kobaktan".Its price is quite high - from 1,5 to 2 thousand rubles, so it is better to do injections in the clinic. After all, the owner of a single pet still does not use the entire bottle, and a month after opening the drug becomes unfit for treatment. The injection is done once a day, which is very convenient. 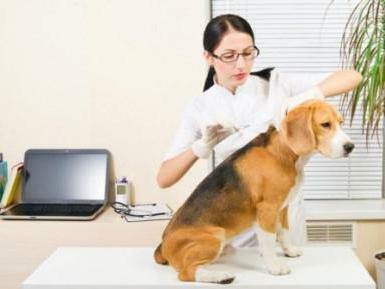 It is better if the injection is done by a specialist, since the drug has some characteristics:

- each time you need to change the injection site so that the swelling of the tissues does not develop;

- it is necessary to accurately calculate the dosage of the drug depending on the disease and the size of the animal - most often this is 0.1 ml per kilogram of weight;

- it is advisable not to miss the injection time and do it after 24 hours.

"Kobaktan" for dogs and cats is prescribed in the following cases:

- in the treatment of urethritis and cystitis;

- for the treatment of postoperative complications and skin infections;

- with otitis media, peritonitis and even sepsis;

- for the treatment of inflammatory joint diseases.

1. After treatment of cattle and pigs, meat can be used for food not earlier than a week. A person can drink milk from milk cows only after 3-5 days from the last injection.

2. The drug requires special storage conditions: in a sealed package, separate from food. After opening, the suspension is usable for a month.

3. In order not to develop a local reaction to the introduction of the drug, you need to change injection sites every time.

4. The effectiveness of the drug decreases when used together with other antibiotics bacteriostatic action.