Enlarged lymph nodes in the abdominal cavity of a child: causes and treatment

An increase in the lymph nodes in the abdominal cavity in a child, or mesadenitis is a disease in which the inflammatory process in the intestinal tract occurs. This disease can be independent or arise as a result of inflammation of the tonsils, respiratory organs, and tuberculosis.

It is important to recognize the progress of the inflammatory process in a timely manner and carry out the required treatment so that complications do not arise, and peritonitis does not develop.

What is the disease

Similar pathology often occurs in the course of many other diseases in the form of their complications, but it can also be independent. The pathological process is accompanied by the presence of painful sensations in the abdomen and general intoxication of the body. In recent times, cases of childhood morbidity have increased.

The most common disease occurs in children under 13 years old. This is due to the fact that the state of the lymphatic system depends on the state of immunity, which, upon reaching this age, completes the formation.

Depending on how many lymph nodes are increased, the pathological process is divided into several types, namely:

Local lesion affects only single lymph nodes. Regional is characterized by an increase in several lymph nodes that are located side by side. The generalized type of the disease refers to the most severe, since several groups of lymph nodes are involved in the pathological process. 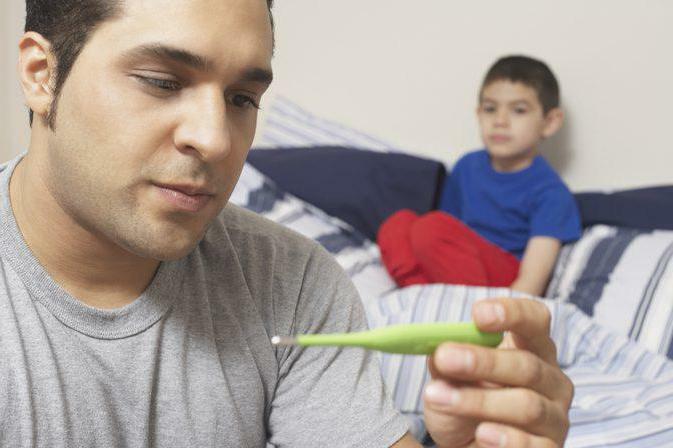 In addition, the increase in lymph nodes in the abdominal cavity of a child is subdivided by the limitation period and can be:

Mesenitis can take any of the forms of the course of the disease. However, it is worth noting that when the chronic form of the lymph nodes passes there is a purulent inflammation that spreads throughout the body.

The exact cause of enlarged lymph nodes in the abdominal cavity doctors can not be named. However, experts believe that the inflammatory process is provoked by various diseases. Often, for such reasons can be attributed to viral and bacterial infections. In some cases, it provokes an increase in the lymph nodes in the abdominal cavity in children psychosomatic. It occurs as a result of nervous experiences and stressful situations. In this case, the treatment should be carried out by a psychotherapist, which will help to correct the mental state of the child.

It should be noted that in the intestine area there are more than 500 lymph nodes, each of which acts as a protective barrier against possible infection. Often infectious agents enter the lymph nodes from the lumen of the intestine or from the affected organs. Among the most common pathogens that provoke an increase in lymph nodes in the abdominal cavity in a child, we can distinguish such as:

In some cases, the inflammatory process can go on independently, but there is an exacerbation of the disease. In this case, the lymph nodes greatly increase, they begin to fester and spread the infection throughout the body. These are only the main causes of enlarged lymph nodes in the abdominal cavity of a child, since up to the end provoking factors have not yet been studied.

Symptoms of enlarged lymph nodes in the abdominal cavity in a child can occur suddenly or gradually increase. When the acute form of the disease, its signs are very similar to the symptomatology of appendicitis. Among the main manifestations can be identified:

Symptoms may go away after a few hours, but often continue for 2-3 days. In some cases, along with these signs, the child has a runny nose, a slight cough and a sore throat. 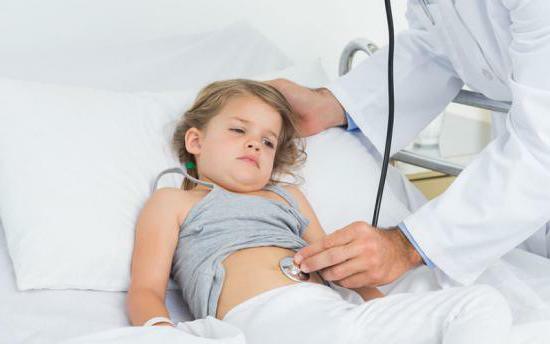 If the increase in lymph nodes in the abdominal cavity in a child was triggered by a tubercle bacillus, the symptomatology is somewhat different. Among the main signs can be noted the occurrence of periodic pain in the abdomen, malaise, a slight increase in temperature, as well as a stable weight loss.

After a while, the lymph nodes begin to swell and can easily be detected during abdominal palpation. This form of the disease is most dangerous, as it can provoke suppuration and necrosis of the lymph nodes, which will entail serious complications.

If for a long time not to carry out treatment, then the lymph nodes begin to swell, there is acute peritonitis, as well as obstruction of the intestine.

To which doctor to consult

If a painful sensation occurs in the peritoneum, it is recommended that you visit a surgeon. If the disease occurs in a chronic form, then initially it is necessary to show the child to the pediatrician. In addition, treatment is carried out by an infectious disease specialist, especially in cases where the disease is specific.

If you find any signs of a disease, you should always contact the doctor. The doctor conducts a visual examination and a comprehensive diagnosis. In addition laboratory tests are prescribed, in particular: 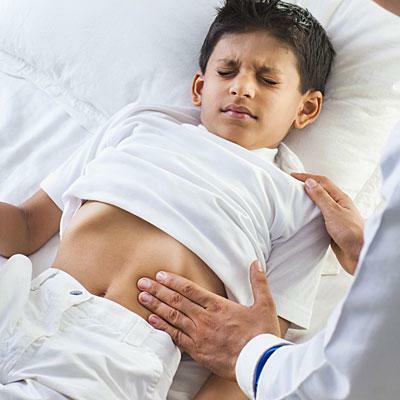 Accurate and correctly conducted diagnostics should completely exclude the presence of appendicitis. In addition, a consultation of a gastroenterologist is required, which appoints an ultrasound examination of internal organs. This procedure will help in a timely manner to identify enlarged lymph nodes in the abdominal cavity in children. In addition, it is recommended to perform laparoscopy( by performing small incisions of the abdominal cavity).

Treatment of enlarged lymph nodes in the abdominal cavity in a child is carried out in a hospital. Of the diet must necessarily exclude spicy, spicy and fatty dishes. In an acute period, nutrition must necessarily be fractional.

In addition, it is desirable to limit the physical activity of the patient, and preference should be given to calm games. Antibacterial therapy is indicated. It is important to take into account the sensitivity of the causative agent to medication. 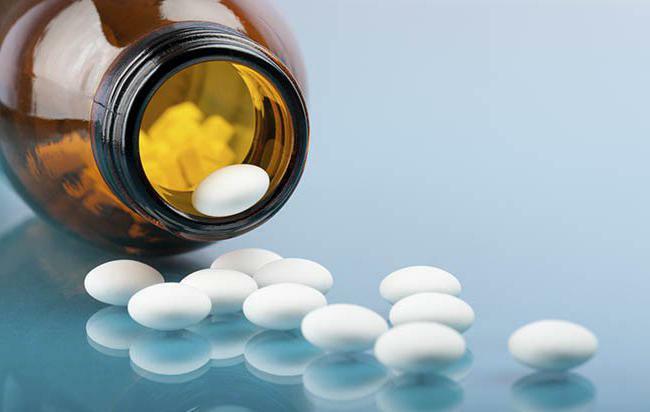 Desintoxication therapy is required, which helps to reduce the effects of intoxication. Anesthetics are prescribed if necessary. When a very complicated form of the disease occurs and complications are present, surgical intervention is required. People's medicine is also very helpful, but they must be used together with medications.

Quite often there is an increase in lymph nodes in the abdominal cavity in a child. Reviews on conservative therapy are mostly only positive, because in this case, you can quickly eliminate the inflammatory process and achieve a significant improvement in well-being. 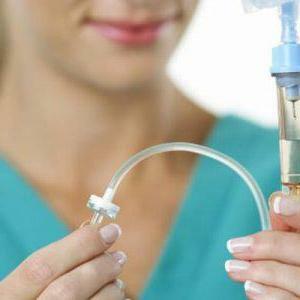 Detoxification therapy is a treatment aimed at reducing the signs of intoxication. Initially, intravenous adsorbents are injected intravenously, and then gradually replaced with preparations for oral administration, for example, Sorbexom, Enterosgel, and Polyphepanom.

Anesthetic preparations are also required, for example, such as "Ketanov", "Analgin".Since these are potent medicines, they are prescribed to children only once, to eliminate a strong pain syndrome.

When TB is confirmed, tuberculosis is given anti-tuberculosis therapy. After elimination of acute pain syndrome, physical therapy is required.

The increase in lymph nodes in the abdominal cavity in children and the increase in eosinophils are well treated with traditional medicine. When the inflammatory process proceeds, home techniques are used. A good means is a decoction of the root of the blackberry, which helps to eliminate inflammation. In addition, you can use a tincture of chamomile or calendula.

When mesenenite shows the consumption of decoction from the seeds of cumin. All these therapeutic agents can be used only in mild forms of the disease. If the disease is mild, self-medication is very dangerous. Applying folk techniques, you need to consult a doctor beforehand, as there may be certain contraindications.

In some cases, there may be a significant increase in lymph nodes in the abdominal cavity in children. Reviews of the surgical intervention of the parents are mostly positive. As a rule, the operation is performed in complicated forms with the presence of pus. In this case, a laparotomy is indicated. Its essence consists in dissection of the abdominal wall and removal of 2-3 inflamed lymph nodes, as well as purging them of purulent contents.

Cut lymph nodes are then sent to the laboratory for the study, and the child is prescribed a prolonged course of recovery, which includes taking antibacterial drugs and various physiotherapy procedures.

Food must be a fraction, at least 5 times a day. If the child does not want to eat, then one meal can be skipped. Overload the body is not necessary, so do not force the child to eat, if he refuses food. Before going to bed, doctors are not advised to eat, only drinking is allowed.

Consequences and complications of

It is very important to carry out the treatment in a timely manner, as this can lead to complications. In particular, among the complications can be identified:

Some of these complications can lead to the death of the patient. That's why when the first signs of the disease a child should immediately go to the doctor.

Preventive measures consist in the fact that initially it is necessary to carry out treatment of bacterial and viral diseases, which lead to inflammation of the lymph nodes in the peritoneum. It is necessary to take certain measures in a timely manner so that the chronic pathological processes do not progress.

A timely treatment of inflammatory processes is absolutely essential. If the first signs of the disease occur, you should not take painkillers, as this can somewhat distort the symptoms.