On the shelves of tobacco shops of different countries, you can find bundles called "Saint George".Cigarettes of this brand are well known to smokers around the world. Nevertheless, in Russia they are not particularly popular. What is this product and why is the opinion of it so ambiguous? This is worth talking about in more detail.

"Saint George" - cigarettes, which first began to produce the famous company "Gallagher", located in the UK.Products of low price and good quality immediately attracted the attention of buyers. The product has gained great popularity in quite wide circles. Even real connoisseurs considered it a good choice. Similar products are also produced by Japan Tobacco International. Over time, and in Russia, his "Saint George" appeared. Cigarettes with this name began to produce a Moscow representative office of the domestic company CJSC Ligget-Dukat. 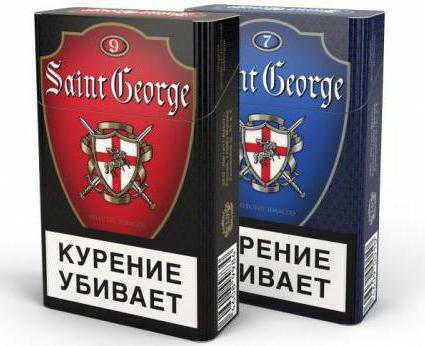 New products have kept the usual design: white paper around the tobacco and brown - for the filter. At the junction there is a golden ring, next to which the name of the product is written in bright red letters. For production, dark tobacco is used, the aroma of which is felt immediately after the opening of the pack. Slightly moist, it burns slowly, gradually changing the original flavor. Due to thick smoke, a small sensation can be felt in the throat at first, but it passes very quickly."St. George" - cigarettes, which have a fairly strong taste. True, this is not immediately felt. It should take a few minutes before a real nicotine attack occurs. Therefore, it is better to smoke them, slowly, gradually enjoying the aroma. Products, depending on the main indicators( resin and nicotine content) are available in two versions: blue and red. And for the packaging used packs of three types: King Size standard for 20 and 25 cigarettes, as well as QSize format Slims of 20 pieces.

Given the customer demand, the most popular in our country are the cigarettes "Saint George" blue. They can be found on store shelves according to the color of the packaging. 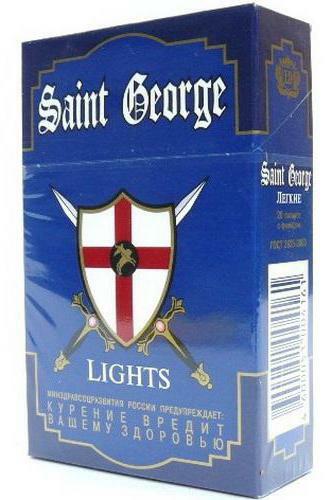 The front side of the pack shows a shield symbolizing royal power, and two crossed swords that signify victory and triumph. On top of the stylish Gothic font the name of the product is written, and in the small oval window the number indicates the level of its strength. Normally, these cigarettes contain 7 milligrams of resin and 0.5 milligrams of nicotine. Such products are considered to be "easy".It is designed for a mass user and is often bought in stores. On sale are also cigarettes in blue packs, made in the format Slims. They are longer than standard products, but have a smaller diameter. Such products, as a rule, are intended for women. Probably, therefore, the content of nicotine in them is reduced to 0.4 milligrams. These cigarettes are well stretched, but the smoke quickly disappears, leaving behind a slight slightly sweet aftertaste in the mouth.

Classical taste lovers prefer "Saint George" cigarettes red. This option is suitable for those who appreciate in cigarettes a fortress and aroma. 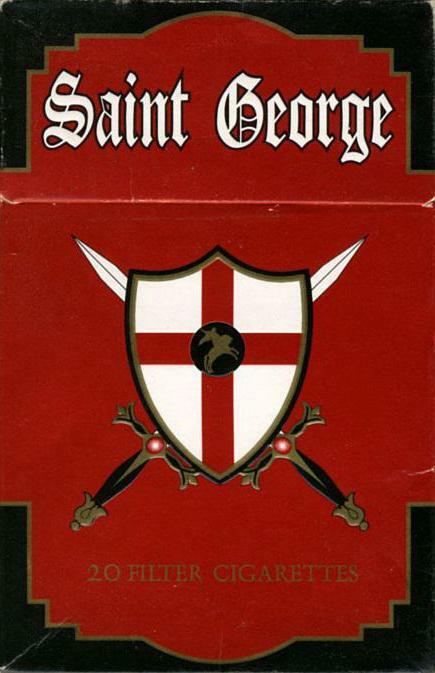 The content of the main components in it is slightly different from the blue analogue. This product contains 9 milligrams of resin and 0.6 milligrams of nicotine. Such indicators are usually chosen by the representatives of the stronger sex. This is understandable, because it is difficult for a woman to make a deep puff of a cigarette with such strong tobacco. And for a man it is not difficult. Externally, the packaging looks similar except for the color. The central image of the symbolism is made on a dark red background, around which is a black edging. The tutu looks very stylish and expressive. This fully corresponds to the internal content of the product. When you inhale, the smoker feels a pronounced aroma with a slightly sweet taste. Heavy smoke envelops the lungs and allows you to immediately feel the whole gamut of flavors. A good quality of tobacco allows these cigarettes to make healthy competition to other famous brands.