Who among us has not heard about the well-known health system developed by the doctor Neumyvakin Ivan Pavlovich? His recommendations on self-regulation of the internal environment of a person are attracted by their competence and timeliness. He does not unfoundedly propagandize a healthy lifestyle, but reinforces him with a personal example of active and productive longevity.

Pages of an astonishing history of serving science

"The Meter of Science and Practice", "Persona Rossii" - these titles deservedly are the talented Russian Neumyvakin Ivan Pavlovich. Biography of the brilliant scientist is closely connected with the victories of Russian space science and practice. 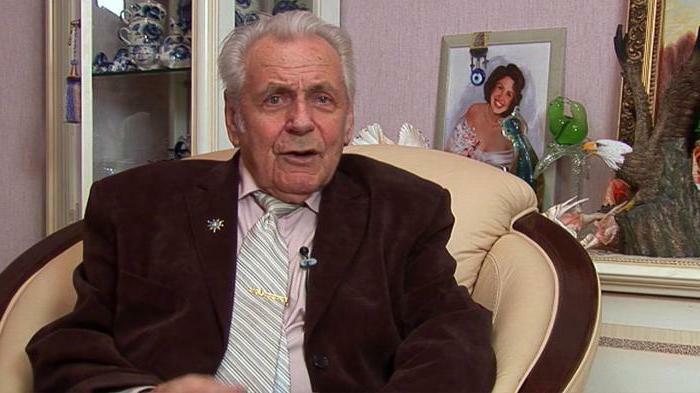 Neumyvakin Ivan Pavlovich( born in 1928, July 7) was born in Kyrgyzstan. Even in his youth, he felt a vocation for healing and in 1951 he successfully completed his studies at the Kyrgyz State Medical Institute. After graduation, he was drafted into the army and served as an aviation doctor for eight years in the Far East. In 1958 he achieved the title of the best aviation doctor of the USSR.

This reputation opens him the doors of the Institute of Aviation and Space Medicine, the employee of which becomes in 1959 Neumyvakin Ivan Pavlovich. His biography as a space doctor begins precisely from this moment.

From 1959 to 1964 he participated in the creation of a unique set of equipment for recording and assessing the medical parameters of astronauts in flight and transmitting them through telemetric channels to Earth.

From 1964 to 1989, Ivan Pavlovich headed the work on creating a space hospital, practically creating an innovative direction in space medicine. During the years of research and innovation, he has accumulated vast experience and solid knowledge of the possibilities of the human body in the most extreme conditions. 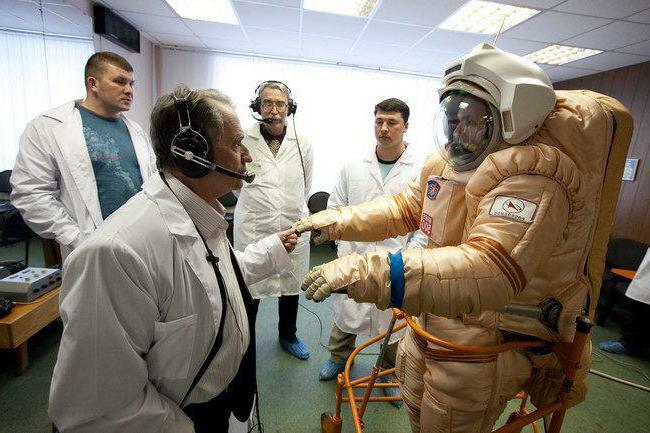 In 1990, after completing his work in astronautics, Ivan Pavlovich Neumyvakin was a real and honorary member of the European and Russian academies of natural sciences, laureate of the State Prize, Honored Honorary Inventor of the Russian Federation.

Ivan Pavlovich Neumyvakin deservedly received the prestigious "Profession - Life" award. He was awarded the title of "Master of Science and Practice".He is a Chevalier of the Order of Mercy.

From problems of space - to earthly problems

Since 1990 Ivan Pavlovich Neumyvakin retired, and his extraordinary mind serves the problems of folk healing. He developed his own health system, wrote more than 60 books. In 1990, he initiated the creation of the Russian Professional Medical Association of traditional and traditional medicine specialists and currently is a member of its presidium and is head of the private clinic "Treatment and Prevention Center".

Ivan Pavlovich Neumyvakin is the creator of the theory of endoecology of the body. According to the scientist, before you treat a person, you should decide what is health. His many years of research work led him to the following conclusions:

- the human body is a single bioenergetic and bioinformational system that has strong internal interrelations and is capable of self-regulation and self-recovery;

- there is no disease as such, there is an imbalance of metabolic processes, provoked by acid-base imbalance. 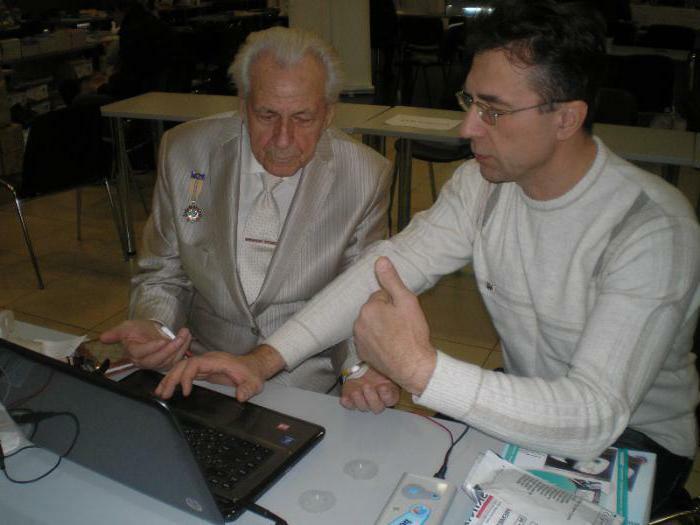 According to the profound conviction of Professor Neumyvakin IP, the reserve of internal strength of the biosystem of the human body is inexhaustible, in any case, it always exceeds the force of external negative impact.

The source of any human disease is slagging of his body, a violation of the immune response and bioenergetic imbalance that arose against the background of acid-base imbalance. Eliminating all these trigger factors, any disease can be defeated without medication, says Ivan Pavlovich Neumyvakin. The health system of the professor is based on this.

Professor Neumyvakin I.P.argues that any biosystem of the human body throughout its life should have a pH value of the medium within 7.4 ± 0.15.A decrease in the indicator indicates acidosis, an increase in alkalosis. Violate the acid-base balance following endofaktory:

- fluid intake during and after meals;

is a predominantly protein diet.

Expositors that shift the pH balance are:

Ivan Pavlovich Neumyvakin insists: if pH balance is not restored to physiological norm, it is impossible to overcome the disease. The books of the professor are available explaining the ways to restore it. 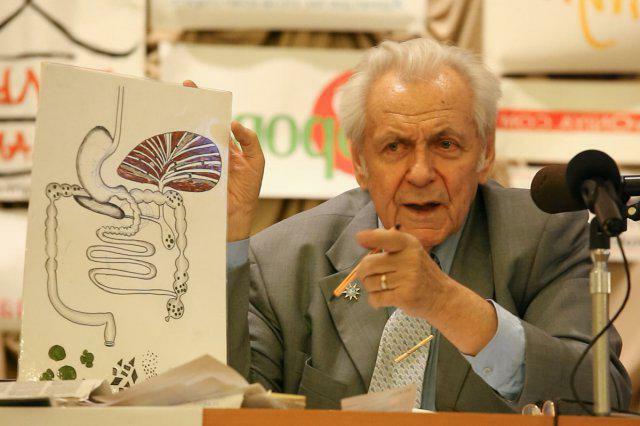 In 1995, the program for the consideration of the program was proposed, authored by Neumyvakin Ivan Pavlovich. The health system underlying the program included several technologies:

- restoration of the biofield structure.

Detoxication in the system of Dr. Neumyvakin is cleaning the body of toxins by normalizing digestion and physiological starvation.

The first postulate of healthy digestion is a split meal, that is, the amount of food eaten per meal should not exceed the volume of the stomach( up to 700 ml).The food should be thoroughly chewed until the taste of the food products is no longer felt.

Contraindicated to drink before meals, drink dishes with water during and after meals. The liquid will dilute the gastric juice, reduce the concentration of digestive enzymes, thereby reducing the efficiency of digestion of food. As a result, the processes of decay and fermentation will inevitably arise in the intestine, which will be accompanied by the release of a significant amount of metabolic products: hydrogen sulphide, methane, etc., which cause intoxication of the organism.

The following rule: after seven o'clock in the evening you can eat only a little sour-milk products, fruits or vegetables. 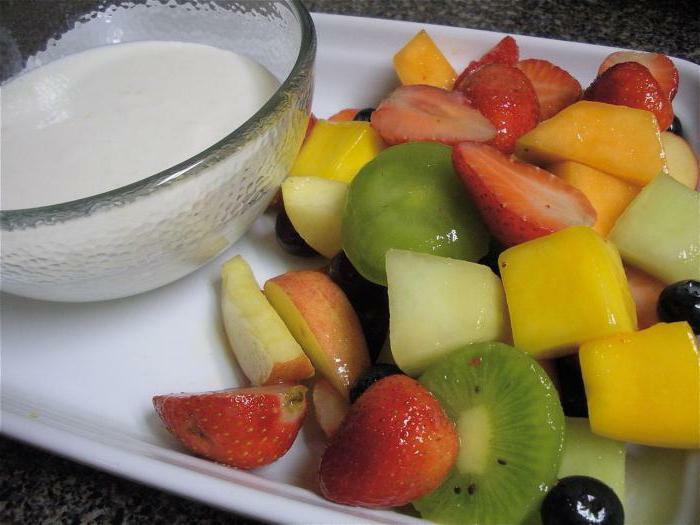 It is necessary to periodically carry out unloading days: 1-2 days fasting on the water. You need to drink only clean water.

Necessarily: the ratio of carbohydrates and proteins in cooked dishes must certainly be 3: 1.Do not combine protein and carbohydrate products. Those who are ill should not use protein products before recovery as acid-forming foods. Elderly people should completely exclude them from their diet.

This substance is a strong natural antioxidant produced by cells of the immune system in the small intestine. It is the donor of atomic oxygen, so necessary for the body. Hydrogen peroxide is capable of normalizing reduced oxidation-reduction processes.

To restore the pH balance, baking soda is used. It is a means to ensure the oxidation of under-oxidized metabolic products.

It is necessary to eat sodium bicarbonate every day on an empty stomach. Enough 1 / 2-1 teaspoon in a glass of water or milk for half an hour before meals. Baking soda is the most effective means of normalizing the pH balance. 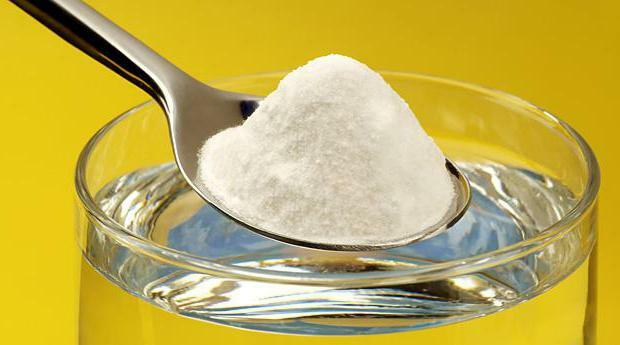 At the heart of photosynthesis of cells of the human body is a quite specific spectrum of UV radiation. It is this spectrum for various reasons in the sunlight is not enough.

The research team of Professor Neumyvakin created apparatus for quantum irradiation. The most famous are Helios-1 and Helios-2.

Quantum therapy in the system of healing Neumyvakina stimulates metabolic processes and increases the biopotential of natural mechanisms of self-regulation and self-protection.

To maintain the body in a tone it is necessary to do physical exercises every day. Must take a toning contrast shower.

Compliance with these simple, low-cost rules will provide the body with everything necessary for its self-regulation and self-healing, our brilliant compatriot Neumyvakin Ivan Pavlovich believes. He devoted much effort to popularizing knowledge about human health, held countless lectures and training seminars. He wrote and published more than 60 books with a total circulation of about 5,000,000 copies scattered around the world. They bring people hope for recovery without medication.

Thousands of letters received by Professor Neumyvakin are filled with warm words of gratitude. The Internet is replete with stories of patients following the system, about their recovery. People with sincere surprise write about what they got as a result: the normalization of pressure, the disappearance of headaches, heartburn, pain in the joints.

A huge amount of evidence of the normalization of the neurological condition. At the same time, people note an increase in physical activity and endurance. Ladies share the disappearance of ailments and pain in women's days.

Older people note a significant improvement in health. It became easier for them to work mentally and physically, they have normalized analyzes. They gain hope.

All over the world people have got a new, healthy life after they followed the recommendations of the health system, developed by Professor Neumyvakin Ivan Pavlovich. Reviews of patients and scientists around the world about his system have an exceptionally excellent degree. For the development and promotion of the health system, he was awarded the Order of Mercy - the highest award of the famous international academy "Mercy".