The structure of the sacrum and coccyx: anatomy and functional purpose

Not everyone treats their health properly. Often people do not even pay attention to some pain, but this shows that the body is not in perfect order, and you need to take action. For example, very few people care about the pain in the sacrum. But meanwhile it can signal the presence of a serious disease. Often, not all of us know the structure of the sacrum. Let's look at it together.

is arranged. The sacrum is a large bone of triangular shape, which is located at the base of the spinal column. Since the children still form a skeleton, then they have five separate vertebrae, and in adults it is a single part. It is placed in a peculiar wedge between the pelvic bones. 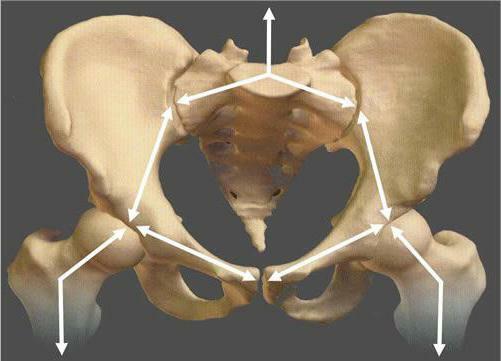 As a rule, the sacrum is formed by five fused vertebrae, but there may be more of them, in the presence of such an anomaly as sacralization. Not always vertebrae fuse in adolescence, which, incidentally, is not a violation, and usually by the age of 25 everything is fixed.

Divisions of the sacrum

Now let us consider in more detail what kind of structure the sacrum has. Its anatomy implies the connection of the bone with the lumbar and coccyx. In this case it consists of several parts:

The front surface has a concave shape, which is more pronounced in the direction downward and upward, but less in lateral directions. In the middle, the front part of the rump is crossed by 4 cross-members, forming the fissure of the vertebrae. On both sides of these lines there are holes in the number of 4 pieces on each side. They have a rounded shape, directed forward and sideways, and in the direction from top to bottom you can see the change in diameter to a smaller side. Through these openings, blood vessels and nerve endings that form plexuses pass. 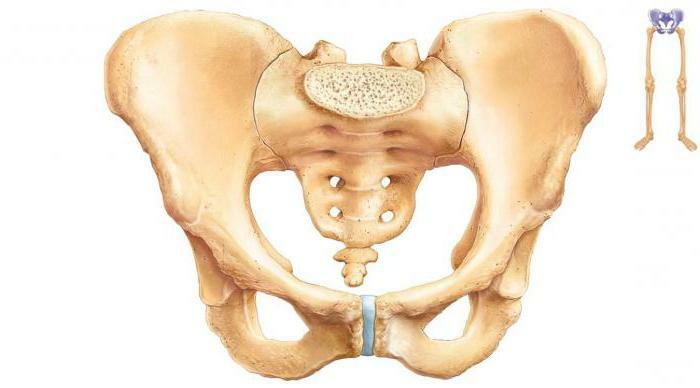 The posterior surface of the sacrum differs in a more narrow and convex shape with a roughness. Along it there are five skeletal scallops, which are formed by the fusion of some vertebrae. The spinous processes form an unpaired crest, the articular processes merge into the intermediate crests, and the same-named paired crests are formed by the lateral processes. Sometimes all the tubercles merge into a single crest.

The lateral surfaces are distinguished by an extension in the upper part, but they narrow downwards.

The base is a bone that has a protruding and wide form, facing forward and upward. Its anterior part connects with the fifth vertebra of the waist, which forms a kind of cape directed into the pelvic cavity.

The apex has an oval shape that allows it to be connected to the bone of the coccyx in the best way.

The structure of the sacrum and coccyx includes a channel that runs along the entire bone and has a curved shape. From above it is expanded and resembles a triangle, and at the bottom it is narrowed. The rear wall of the channel remains unfilled. In the sacral canal is a plexus of nerve endings that exit through the holes.

pelvis arranged? The sacrum, located closer to the back, is only a part of the overall structure of the pelvis of any person, regardless of gender. As a rule, it consists of three main parts:

At the front, two paired bones of the pelvis are connected by means of a non-sinovial semi-mobile junction. Otherwise, this site is referred to as a lone articulation or pubic symphysis. Behind, these bones are attached to the same sacral bone protrusions in their ankle-shaped areas. As a result, this leads to the formation of paired sacroiliac joints. 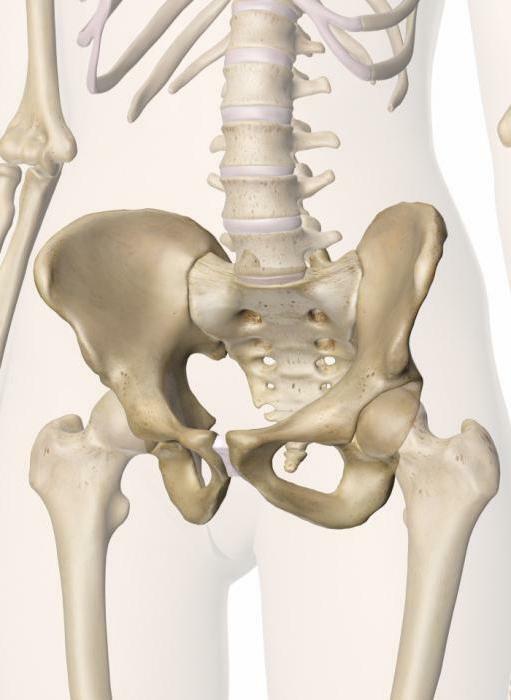 In this case, each of the two bones, as well as the structure of the pelvis, in turn, also consists of three other components:

At the age of 16-18 years of age these bones are interconnected by cartilage. Then there is a gradual fusion of these elements into a single pelvic bone. On the outer surface there is an acetabulum, which serves as a convenient place for fixing the head of the femur.

As a result, a pelvic cavity or ring is formed, where internal organs are embedded. In this case, the entire pelvis is divided into two sections: large, wider( pelvis major) and smaller, more narrow( pelvis minor).They are separated by a boundary line that passes through the sacral cusp, the arcs of two ileal bones, the scallops of the pubic bones, and the upper border of the lone articulation.

As a result, the structure of the pelvis includes a department where the internal organs belonging to the lower abdominal cavity are located - this is a large basin. And in the small hide the rectum and bladder. In addition, here is the uterus along with the appendages and the vagina in women. In men, this department protects the prostate gland and seminal vesicles.

Differences in the structure of the pelvis of men and women 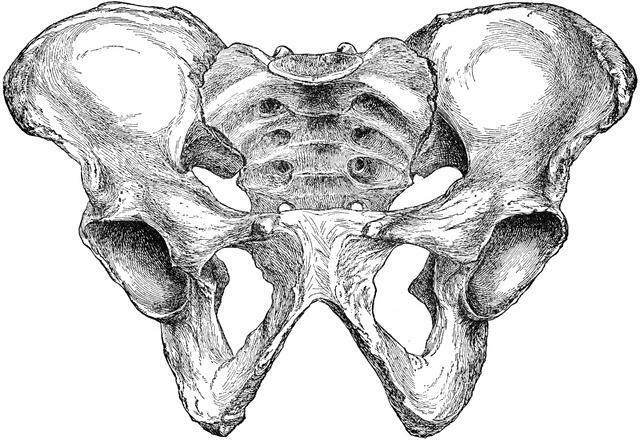 Mainly the differences in the structure of the pelvic department are due to the fact that the body of a woman is adapted to the birth of a child. Like the pelvis, otherwise the female sacrum looks like( the structure of which is presented in our article).It is wider and less curved.

The female pelvis is much wider and shorter. In addition, its openings are also different: in the female half, they are much wider, as a child passes through them. And during childbirth the hole increases. The pelvic bones of women are more curved than in men. 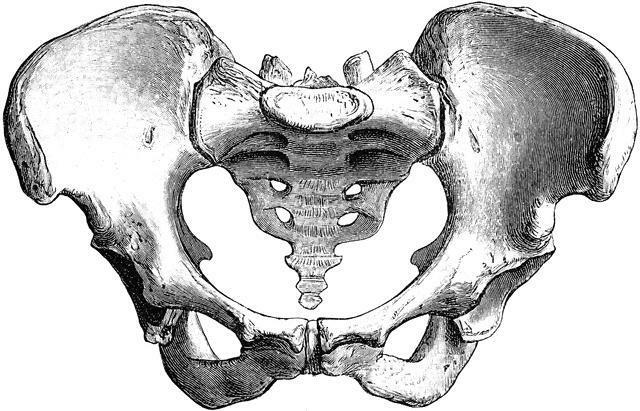 In our body, an important role falls on the sacrum. Features of the structure allow it to perform the main function to protect organs that are located in the pelvic cavity. But, in addition, the sacrum provides the vertical position of the human skeleton. Thanks to him, the entire load is distributed evenly, especially when walking is a large part. And since the vertebrae of the sacrum are immobile, it can not perform the motor function.

Sacral section would not be able to function normally without a muscle group:

The beginning of the pear-shaped muscle is the sacrum itself, the ligamentous apparatus and the large sciatic foramen. Separate bundles of muscle fibers leave from them, which then join and are sent to the large trochanter of bone of the thigh. Muscle provides rotational movements of the femoral joint. 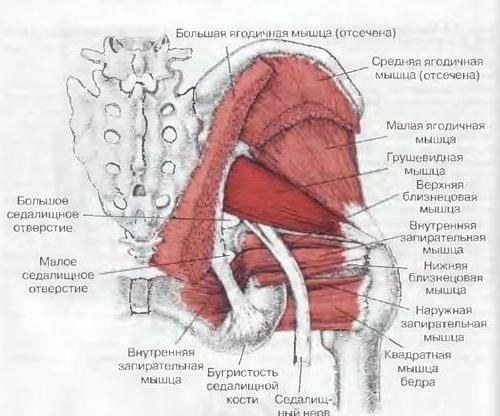 The iliac muscles of the sacrum also begin with the bone, where the iliac crest, together with the pit, is responsible for its attachment. Then the muscle goes to the small spit of the hip bone. Its function is to bend the lower limb.

Partitioned muscle fibers are located in the furrows of the sacrum and are responsible for flexing the back back.

The gluteal muscular apparatus originates from the bone of the sacrum and coccyx, including the iliac. Further, the fibers extend up to the gluteal tuberosity itself. In the entire sacral section, the gluteus muscle is the largest. Its task is to rotate and flex the lower limbs.

Blood supply to the sacrum of the

Certain blood vessels are responsible for supplying the muscle fibers of the described department. The structure of the sacrum is such that the pear-shaped and gluteal group of muscles receives useful substances due to the gluteal arteries, which are divided into several branches.

The iliac-lumbar artery is suitable for iliac muscle fibers. In addition to it, the artery that surrounds the hip bone also participates. The lumbar arteries provide nutrition to a multistep group of muscles.

Good work of the muscular structure is possible due to nerve endings. The activity of the iliac and pear-shaped muscle groups is controlled by the lumbar and sacral plexus. This ensures the mobility of each joint. At the same time, the lumbar plexus corresponds to the iliac fibers, and the nerve endings of the sacrum follow the pear-shaped muscles. 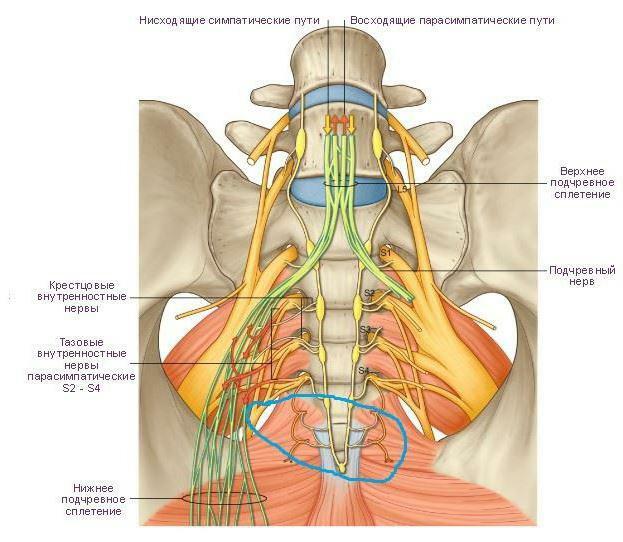 The structure of the sacrum includes the gluteal plexus of nerve cells, which control the work of the same muscles. For the innervation of the multistart group of muscles, the spinal nerve channels correspond.