How to make fixes on the teeth with your own hands?

Every person wants to be stylish. In order to "stand out" from the crowd, he picks up beautiful clothes or fashion accessories. But this is not limited to, and many people want to imitate popular stars, choosing for themselves a more original solution, namely - jaw jewelery. And it fixes on the teeth, which look unique and attract the eye to a smile.

Fixes, or, as they are called grilles, are special jewelry pads that are installed on one or more teeth at the same time, usually on the front teeth, but there are exceptions. These pads look like trellised decor, inside of which even precious stones can be inserted. 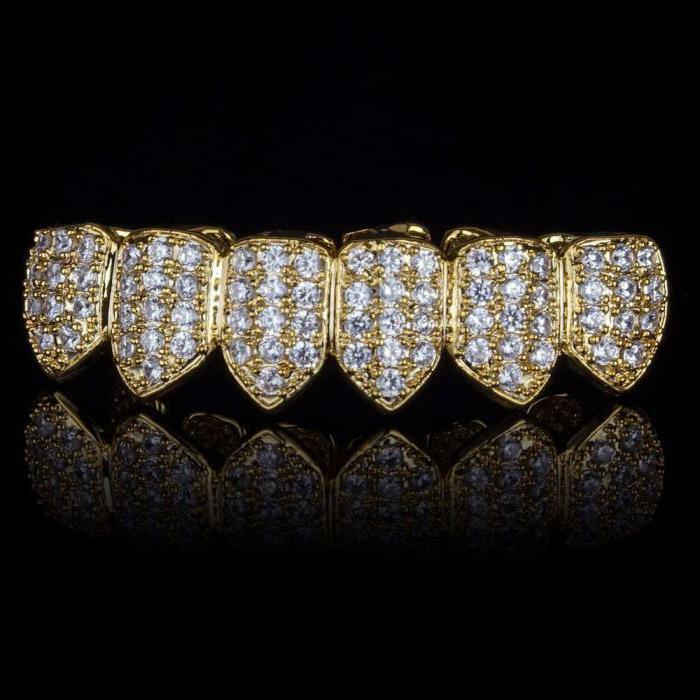 This decoration looks unique and it can not be called inconspicuous. Choose fixes on the teeth for themselves mainly rappers, pop stars. But recently this accessory has gained popularity also among people who follow the fashion. You can not believe, but even children are wearing them!

For the first time it was hip-hop artists who decorated their jaw with such a decorative element as fixation on the tooth. Why did they do this? The answer is unambiguous - to attract attention to yourself! However, these jewelry has recently gained real popularity. Moreover, not only among representatives of various subcultures, but also famous athletes, musicians, singers, as well as ordinary people of different ages and nationalities.

Eddie Plain - the owner of a store in the city of New York - is the progenitor of this extravagant decorative decoration. It is his idea to put gold, platinum and silver gratings on teeth, equipped with a variety of inlays. Initially, this idea was appreciated by representatives of black culture. 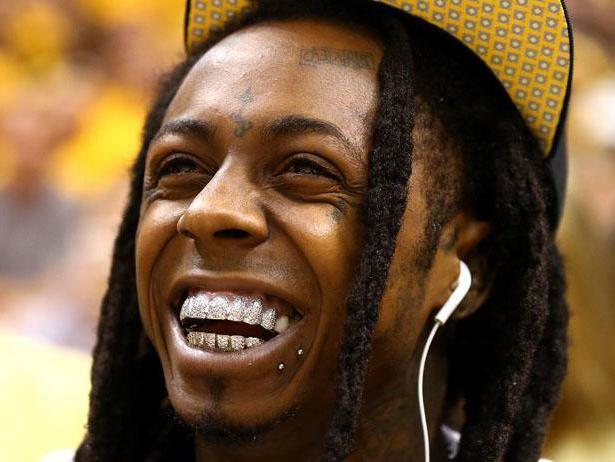 Fixes - what are they?

Fixes on the teeth - what are they? This question is asked by many people who first encounter the problem of their choice. Conditionally they are divided into two types:

The first type of grills is made of metals such as platinum, silver or gold. They are made by individual order. This takes into account the shape, size and even the number of teeth. An additional decoration of this element are precious stones, for example, diamonds, thanks to which the smile looks even richer.

Non-precious fixes are made of ordinary metals. Their size is standard, as an additional decoration used ordinary, non-precious stones.

It should be taken into account that it is not worthwhile to acquire fixes of doubtful production, it is harmful to the teeth and can cause allergic reactions. Therefore, if you do not have the money to purchase precious lining for your teeth, give preference to those models that are made of medical alloys.

And what about design?

Both precious and usual fixes can be different in appearance. The most common are latticework with inserted stones. But they can also be made in the form of letters of your name, in the form of a grin of animals or in the form of various objects. There are a lot of options, it all depends on the customer's imagination. 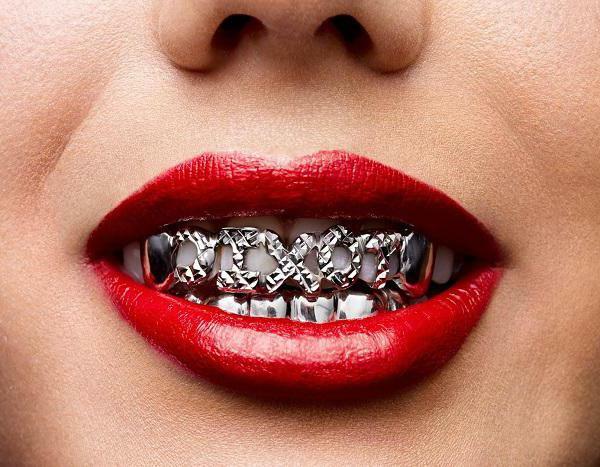 How to make a fix on a tooth?

Many of those who want to acquire the above described jaw ornament, asks the question: "How to make a fix on a tooth?".Such products are manufactured in a special production, but the inhabitants of our country usually look for an opportunity to save money and do it themselves. Below is an example of making grills with your own hands. Of course, they will not look like real ones, and they will only last a few hours, but this is the most economical version of all that you can imagine.

You will need: foil, crystals and glue. 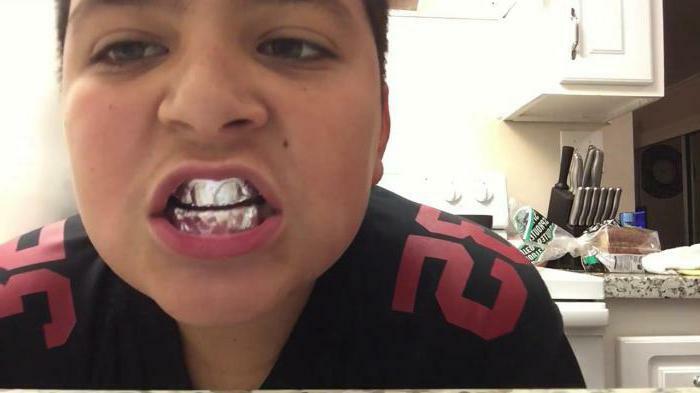 Now you've learned how to make a fix on a tooth yourself. If you want to make fun of someone - then this option is what you need.

For self-made grills, use only non-toxic glue to avoid poisoning.

This, so-called, one-time fixation on the tooth. You can make it with your own hands, but it's not known how long you can wear it and how much it will serve you. It is best to order grills from professionals. 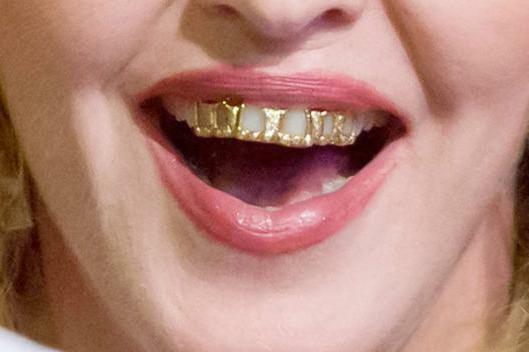 How much are the fixes?

I'm sure this question interests you, too. In fact, prices vary in different limits, depending on what material is made of fixes and what are their design features.

It's clear that fixes on the teeth of stars are very expensive, from several thousand dollars and higher. After all, such jewelry - this is a real piece of jewelry. In addition to the fact that various precious metals are present in this design, additional trimmings of grills are not trivial rhinestones from the nearest store, but real diamonds, rubies, emeralds and sapphires. Precious fakes are made only by individual order, which makes the cost of the product even higher.

Budget options are distinguished by democratic prices, because they are made of medical alloys( and other metals) and decorated with rhinestones. For example, on the famous "AliExpress" you will find fixes of different price category, ranging from 150 to 2000 rubles. But we would not recommend paying attention to the cheapest options, as doubtful alloys can ruin the enamel of the teeth.

In 2013, the smile of the Madonna became brighter. She placed grills on her teeth, made of gold and studded with diamonds. The first photo, laid out by a star in the "Instagram", caused a flurry of conflicting emotions among her fans. Madonna and earlier experimented with the appearance, decorating the teeth скайсами and gold overlays. Here is her fixation on the tooth, the photo of which has already been appreciated by many. 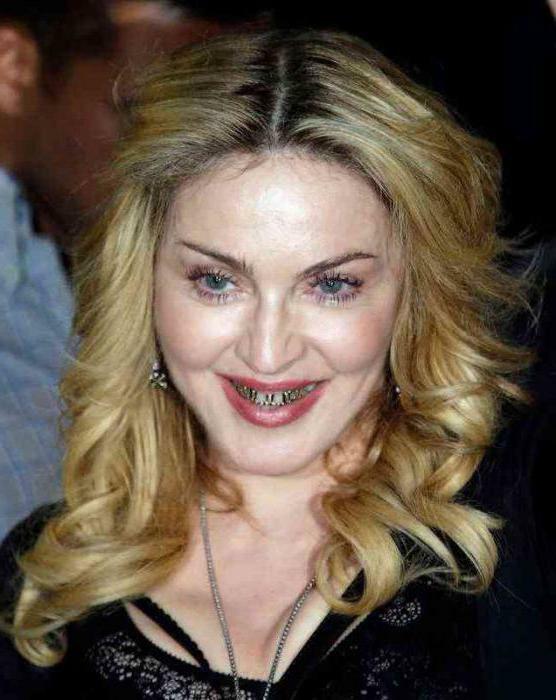 Singer Rihanna generally distinguished herself from her "colleagues" and installed on her jaws not traditional canines, but a miniature model of Kalashnikov assault rifle, made of pure gold.

A new "fashionable chip" was appreciated not only by women, but also by men. For example, Justin Bieber, too, installed a gold lining on his teeth and now, smiling, everywhere demonstrates his new thing.

Decided to install the lining? Then order the fixes individually. This will guarantee that they will accurately repeat the shape of your teeth, securely fixed and do not fall off at the most crucial moment. It is better to give preference to the removable models, as this will allow to fully comply with hygiene of the oral cavity.

To make your smile brighter, you do not need to install fixes. Regularly visit the dentist, do bleaching procedures, give up smoking and coffee - and the smile will become just chic.