Reproduction of viruses in a cell

The smallest pathogens of various infectious diseases are called viruses. They are intracellular parasites.

viruses All the most known infections on the planet are caused by these parasites. They are capable of affecting all living things, including the simplest microorganisms. Almost 80% of all infectious diseases that affect a person are caused by viruses. There are more than 10 major groups that are pathogenic to the body. 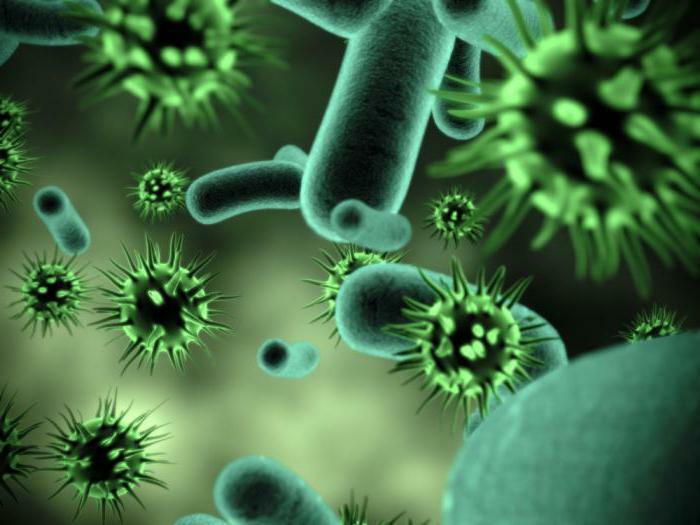 But viruses can not be too dangerous for their master. Otherwise, this can lead to the complete disappearance of the donor organism, which means that the causative agent of diseases will also be destroyed. But the viruses can not be too weak. If the host's body develops immunity too quickly, they will disappear as a species. It often happens that these microorganisms have one master, inside of which they live, without bringing trouble to the latter, and pathogenic influence at the same time have on other living beings.

They reproduce by reproduction. This means that their nucleic acids and proteins are first reproduced. And then the created components are completed with viruses.

Types of virions and pathways of infection

Before we understand how viruses multiply in a cell, we need to understand how these particles get there. For example, there are infections that are spread exclusively by man. They include, measles, herpes and partly the flu. They are transmitted by contact or airborne droplets. 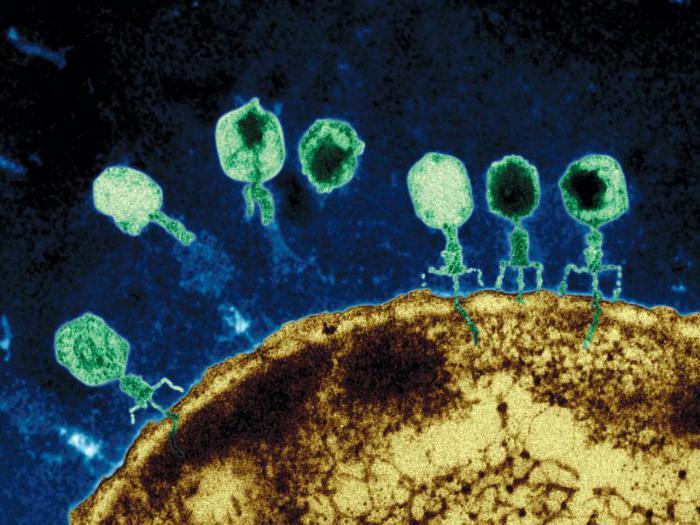 Enteroviruses, reoviruses, adenoviruses can enter the body by food. Infect, for example, papillomavirus can be with direct contact with a person( both domestic and sexual).But there are other ways of infection. For example, some species of rhabdoviruses can be infected as a result of a bite of blood-sucking insects.

There is also a parenteral route of infection. For example, the hepatitis B virus can enter the human body during surgical manipulation, dental procedures, blood transfusion, pedicure or manicure.

Do not forget about the vertical route of transmission of infections. In this case, when the mother is ill during pregnancy, the fetus is affected.

For a long time about the causative agents of most diseases were judged only on the basis of pathogenic effects on the body. To see these pathogenic organisms in scientists it turned out only when an electronic microscope was invented. At the same time, we managed to find out how the viruses multiply. These microorganisms vary markedly in size. Some of them are similar in size to small bacteria. The smallest approximate the size of protein molecules. To measure them, use a nominal value - nanometer, which is equal to one millionth of a millimeter. They can be from 20 to several hundred nanometers. By appearance they are like sticks, balls, cubes, threads, polyhedra.

To understand how the multiplication of viruses occurs in cells, we need to understand their composition. Simple pathogenic microorganisms consist of nucleic acid and proteins. And the first component is the carrier of genetic data. They consist of only one kind of nucleic acid - it can be DNA or RNA.On this difference, their classification is based.

If inside a cell the viruses are components of a living system, then outside them they are inert nucleoproteins, which are called virions. A compulsory component is proteins. But different types of viruses, they differ. Due to this they can be recognized by specific immunological reactions.

Scientists have discovered not only simple viruses, but also more complex organisms. They can also include lipids, carbohydrates. Each group of viruses is distinguished by a unique composition of fats, proteins, carbohydrates, nucleic acids. In some of them there are even enzymes.

The beginning of the breeding process

Viruses are considered absolute parasites. They can not live unless they do harm. Their pathological action is based on the fact that when they multiply, they kill the cell they are in.

To understand how this process takes place, it is possible, if we consider in detail how the microorganism penetrates into the cell, and what happens thereafter. Virions can be imagined as a particle consisting of DNA( or RNA), enclosed in a protein cover. Reproduction of viruses begins only after the microorganism is attached to the cell wall, to its plasma membrane. It should be understood that each virion can attach only to certain types of cells, in which there are special receptors. One cell can accommodate hundreds of virus particles. 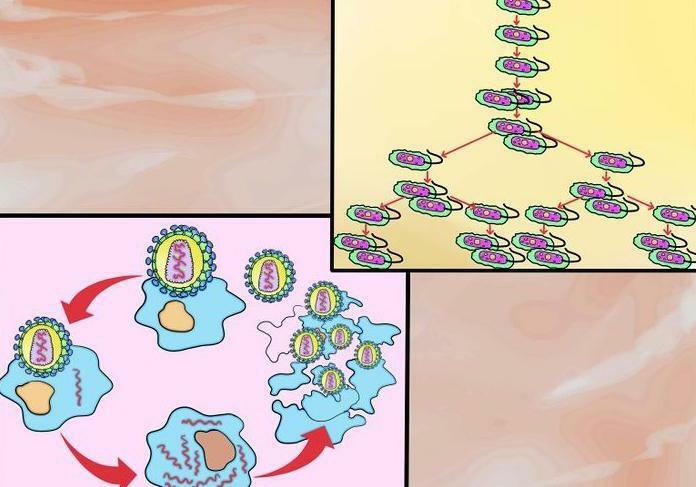 After this, the process of viropexis begins. The cell itself draws inwardly attached virions. Only after this begins "stripping" of viruses. With the help of a complex of enzymes entering the cell, the protein envelope of the virus dissolves and the nucleic acid is released. It is through the channels of the cell that passes into its nucleus or remains in the cytoplasm. Acid is responsible not only for the multiplication of viruses, but also for their hereditary characteristics. Own exchange in cells is suppressed, all forces are directed to create new components of viruses.

The nucleic acid of the virus is inserted into the cell's DNA.Inside, multiple copies of viral DNA( RNA) are being actively created, this is done with the help of polymerases. Some of the newly created particles are connected with ribosomes, and there is a process of synthesis of new proteins of the virus.

Once a sufficient number of virus components have been accumulated, the composition process will begin. It passes near the cell walls. Its essence lies in the fact that new virions are assembled from the components. So the proliferation of viruses.

In the newly formed virions, it is possible to detect the particles of cells in which they were located. Often the process of their formation ends in the fact that they are enveloped by a cellular membrane layer.

As soon as the composition process ends, the viruses leave their first host. Formed offspring goes away and begins to infect new cells. Reproduction of viruses occurs directly in cells. But they end up being completely destroyed or partially damaged. 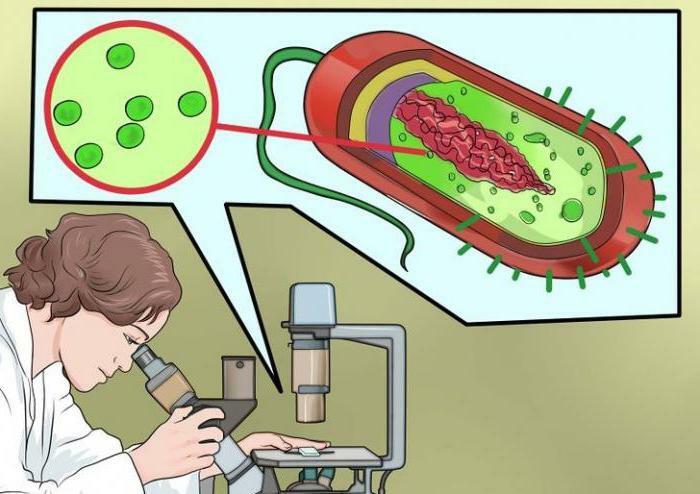 Having infected new cells, viruses begin to multiply actively in them. The cycle of reproduction is repeated. The way in which the output of the created virions will pass depends on the group of viruses to which they relate. For example, enteroviruses are characterized by the fact that they are rapidly released into the environment. Herpes agents, reoviruses, orthomixoviruses come out as they mature. Before they die, they can go through several cycles of such reproduction. At the same time, the resources of cells are depleted.

Reproduction of bacteria and viruses in some cases is accompanied by the fact that particles of pathogenic microorganisms can accumulate inside cells, forming crystal-like aggregations. Specialists call them inclusion bodies.

For example, with influenza, smallpox or rabies, such clusters are in the cytoplasm of cells. In spring-summer encephalitis they are found in the nucleus, and with other infections they can be there and there. This feature is used to diagnose diseases. It is important in this case and where exactly the process of virus multiplication takes place. For example, when oval or round formations are found in epithelial cells, they speak of smallpox. Cytoplasmic clusters in the brain cells indicate rabies.

The method of propagation of viruses is very specific. Initially, the virions enter the interior of the cells suitable for them. After this, the process of releasing the nucleic acids and creating "parts" of the parts for future pathogenic microorganisms begins. The process of reproduction ends with the completion of new virions that enter the environment. It is enough to break one of the stages of the cycle, so that the multiplication of viruses was stopped or they began to give inferior offspring.