Sanatorium of the Ministry of Internal Affairs in Sochi."Spark", "Hosta", "Salute" - photos and reviews

of the Ministry of Internal Affairs of Russia to its employees and their families has provided an opportunity to improve their health throughout Russia. The health resorts of the Black Sea are especially welcome among employees, because the sea air has a beneficial effect not only on the respiratory system, but also on the whole organism.

Three Sochi health resorts belong to the Black Sea sanatoriums of the Ministry of Internal Affairs: Khosta, Iskra and Salyut. Employees of internal affairs, being subjected to constant tension at their work, can correct here the health of the nervous, cardiovascular and musculoskeletal systems.

Sights of the city of Sochi 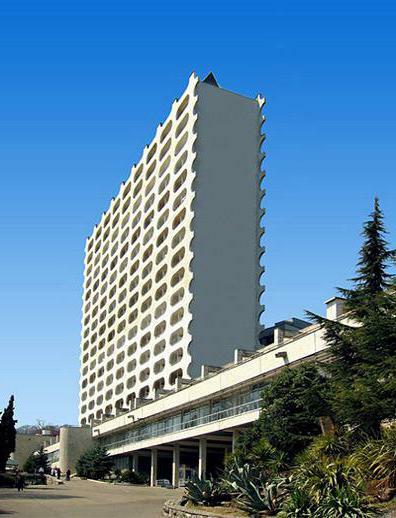 Every visitor of the city will be able to find a hobby for himself according to his own preference. Here you can organize an independent excursion, accompanied by a guide. If you are a fan of more active movement, then the city quest will be an excellent entertainment, which also helps to know the city from the side, inaccessible to every tourist. Children will enjoy a huge oceanarium, a fun aquapark, a dolphinarium and so on ad infinitum. There is also an amusement park in the city, only not with roundabouts, but with pendant bridges.

Given that Sochi is an ancient city, it is possible to find many antique buildings and other ancient buildings. In this regard, there are a lot of museums here.

For those who came to the city for the first time, it is best to visit one of the highest points of Sochi - the Ahun watchtower, 663 meters high, from where the whole city is visible, as in the palm of your hand.

In Sochi is one of the eighteen residences of Stalin. Despite the fact that he had a lot of residences, Sochi is considered his favorite. Now it is a museum of local lore!

Who can become a guest of the sanatorium?

The Iskra sanatorium in Sochi, as well as Salyut, as well as Khosta, despite its apparent limited access( although in fact the clinics are available not only to the Ministry of Internal Affairs) is open to visitors from all over the world at any time. The disadvantage may be the inability to clarify the cost of living through Internet resources. A huge plus is the three meals a day and the organization of everyday life for a full-fledged family. Children are recommended to take with them to the hospital from the age of 4.This corresponds to the size of rooms and the availability of beds. 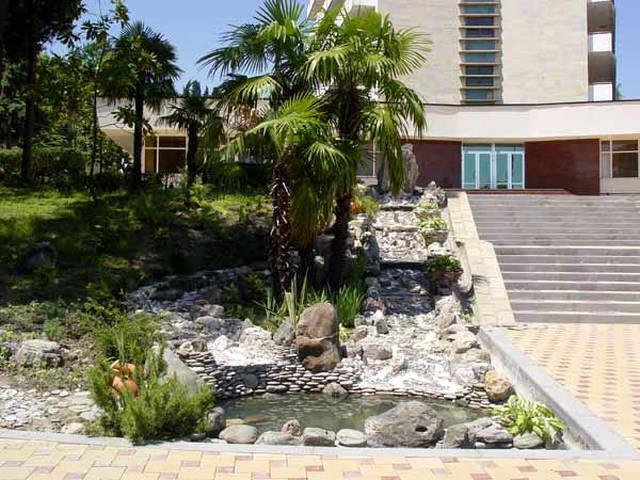 "Hosta"( sanatorium of the Ministry of Internal Affairs) and similar "Iskra" and "Salyut" are intended for family rest. Of course, young people can also come and have a great rest. But, knowing the preferences of youth( and this is kutyzh until the morning and late breakfast), we can assume that the conditions of a clear order they will not work.

Location of the hospitals

According to the reviews of many holidaymakers, every sanatorium in the Ministry of Internal Affairs in Sochi is in an uncomfortable location that does not have a direct connection to the stations. But this is more than offset by close proximity to the sea. A settlement in the room with access to the sea makes you forget everything and everything.

Why is it so difficult to find this sanatorium? Hosta is a resort town in Sochi. According to some sources, this is already a microdistrict of the city itself, but it still remains remote from all the stations. Many visitors for personal convenience book a taxi, which will cost relatively inexpensively( about 350 rubles). 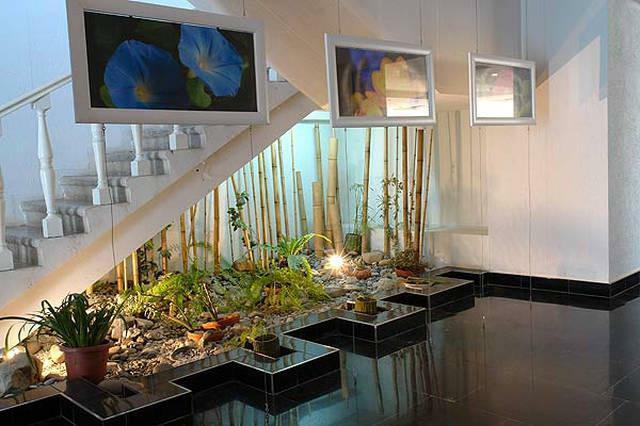 It should also be noted that to search for contacts to find out about the availability of numbers, it's best to directly contact the site: hosta-mvd.ru.

The year 2014 was very meaningful for the whole city, because thanks to the Olympics all the seats were transformed beyond recognition, and the old and dull looked younger, updated and became more attractive for tourists. The entire territory of Sochi belongs to a protected area, therefore the forests surrounding Gagra, with all their flora and fauna, have preserved beauty and primitiveness. In Sochi, the spa resort Iskra( MIA) offers rooms only with sea views. Therefore, having chosen at random, you do not lose anything. The difference is only the footage!

All rooms are equipped with a bathroom, a shower cabin, a refrigerator and a standard set of furniture. For example, the sanatorium of the Ministry of Internal Affairs "Salyut"( Sochi) reviews over the past year and a half has only positive because of excellent repair. If earlier with the appearance of the hospital itself and its rooms there were problems, for today they have already been eliminated.

The building has its own dining room, where four meals are made for children, and not three( for adults). 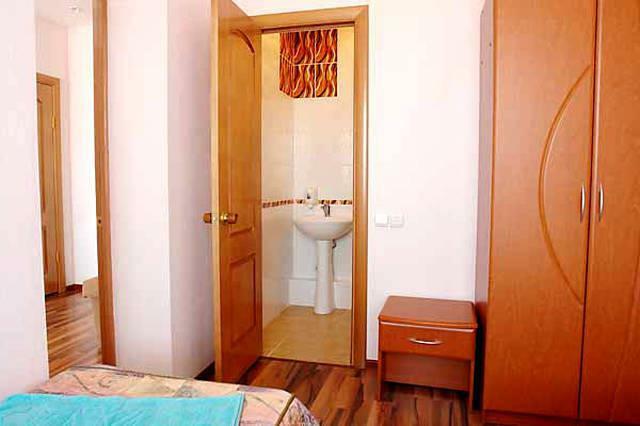 Also included in the price is a private beach with sun beds and umbrellas. Everything that is attached to this - for the money of tourists. Namely: boat trips and boat rental.

Internet, unfortunately, is not available everywhere, but the connection is still possible. This will provide an excellent opportunity to relax from all the benefits of civilization. But still there is a hairdresser, a cafe and a restaurant, a summer cinema, a library and a tourist bureau. In the latter you can buy tickets for walking tours. Such hikes include picking up on the territory of a boarding house, a trip to the research site and returning back on the bus.

Sanatoriums are designed to restore the health of diseases of the nervous, genitourinary, cardiovascular and musculoskeletal systems. Separately provided for procedures against gynecological and skin diseases. For example, Charcot's shower, iodine-bromine, coniferous or salt baths, intramuscular electrostimulation( gynecology problems), circular shower, underwater massage and so on.

On the territory there are doctors of all profiles: beauticians, chiropractors and dentists, which allows not only complete recovery, but also private treatment.

Entertainment in the territory of health resorts

In addition to the rental of marine vehicles and entertainment on the water, the clinic itself provides animators and babysitters for young children who can take a child, so that parents can safely visit the procedures or simply stay in peace and quiet.

For adults discos and parties are regularly arranged. Many people love to celebrate New Year here.

"Hosta" sanatorium will be the most convenient for young representatives. All this is due to the fact that the sanatorium is not one large building, but many small ones that will allow organizing local "parties" and not disturbing families with children.

The sanatoriums of the Ministry of Internal Affairs( Sochi) offer very loyal prices, and for quality services. The cost of a week of accommodation will not cost more than the daily cost of Radisson. This price includes both food and a standard set of medical procedures, as well as a clean and tidy beach. 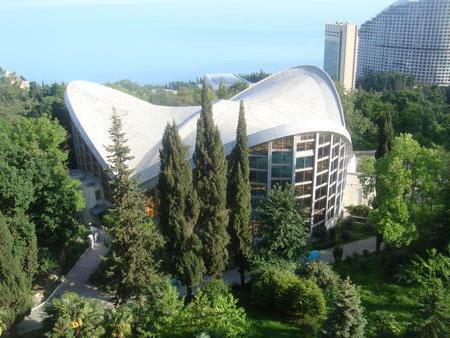 The distance between the clinics is not too big, but to each reach equally far from the Adler airport, and from the railway station in Sochi. At first glance, this is a disadvantage, but for an experienced tourist it is only a lure of excitement, and every sanatorium of the Ministry of Internal Affairs in Sochi will be appreciated.

As for reviews of institutions, it is worth noting that there have been very few negative ones lately, so there is no point in talking about them in detail.

Thus, "Hosta"( sanatorium of the Ministry of Internal Affairs) is a special resting place. Almost every meter resembles the Amazon jungle, which makes rest really fantastic, and a room in a small villa will be a rescue for people with a busy schedule. Only here, far from civilization, rest will be generally possible.

If you take into account all the tourist facilities of this city, then, perhaps, the sanatorium of the Ministry of Internal Affairs in Sochi will not be in the first place. But given the cost and procedures, you can put up with the lack of champagne in the room. And the cleanliness and friendliness of the staff will be a pleasant addition to the rest!