Before you talk about complex things, you need to deal with simple things. In this case, start not with complex protein structures, the purpose of which for many - just a set of letters, and with a more understandable device of blood cells. Likbez, so to speak.

Everyone knows that blood consists of a liquid part and solid particles - cells. Plasma is a solution of electrolytes, proteins and vitamins. The greater part of it is water( about 95%).In addition, it contains enzymes, metabolic products, inorganic substances necessary for our body to maintain life. 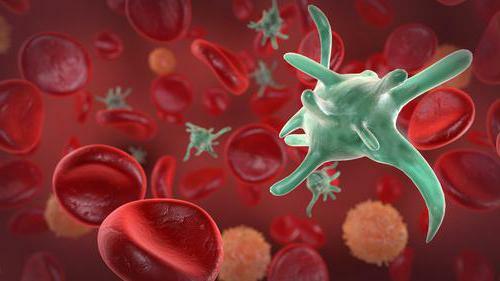 Now about the cellular component. In an adult, up to half of the total blood volume is occupied by uniform elements. They are represented by erythrocytes, platelets and leukocytes.

Within the framework of this article, we are only interested in leukocytes and their role in human life. As already mentioned above, leukocytes are a general concept assigned to a group of cells. There is such a modern classification of the mentioned blood cells:

1. Granular, or granulocytes. After staining with a marker in them, you can see a large segmented core and a large number of small inclusions. Whenever possible to perceive the dye, white blood cells are divided into eosinophils( pink), basophils( blue) and neutrophils( colored in both colors).

2. Unscientized, or agranulocytes. They have a simple nucleus, they do not contain inclusions in the cytoplasm. These include lymphocytes and monocytes.

The blood test indicates the absolute number of leukocytes and the percentage of each fraction as a percentage.

So we got close to what interests us. These are blood cells responsible for inflammatory reactions. They have for this purpose a number of nature-stipulated features. Among the latter, one can single out the ability for amoeboid movement, i.e., independent movement in blood vessels and tissues, regardless of the blood flow;the ability to penetrate through the vascular wall, seeping between cells, and get into tissues and organs, increasing inflammation. In addition, eosinophils inherently chemotaxis( this is directed to the source of a chemical substance).

Another interesting property of these cells is phagocytosis, and more precisely - microphagocytosis. They are able to absorb small particles or fragments of cells. But their main property remains representativeness. Thanks to it the organism clearly catches foreign agents and produces immunoglobulins E for their elimination.

The ability to absorb and release histamine makes eosinophils irreplaceable in a hotbed of inflammation. But too many of them can cause anaphylaxis and shock - a deadly state. Any allergy provokes an increase in the amount of this type of white blood cells in the blood. This is one of the diagnostic features. 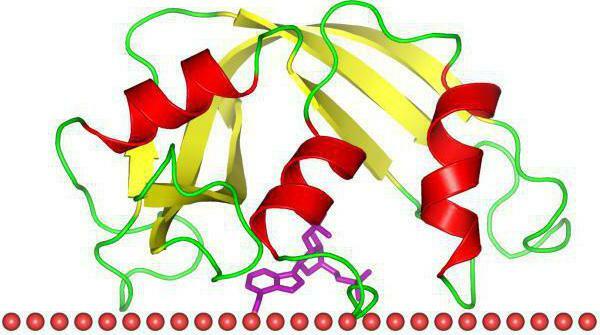 ECP is an eosinophilic cationic protein. And do not be surprised that the abbreviation is different, since international names are written mainly in English.

Knowing now what eosinophils are, one can easily understand and accept the phrase that the eosinophilic cationic protein is one of the constituent granules present in these blood cells. It is one of the proteins that are released during the inflammation reaction and affect the surrounding tissues and organs. Since the body's reactions are mostly stereotyped, the proteins can have a beneficial effect on the constancy of the internal environment or destroy it. The activity of this chemical can be associated with helminthiosis, bronchial asthma, dermatitis, rhinitis, autoimmune diseases, chronic fatigue syndrome.

Of the four major proteins of eosinophils, cationic is the most significant indicator when monitoring the activity of the inflammatory process. 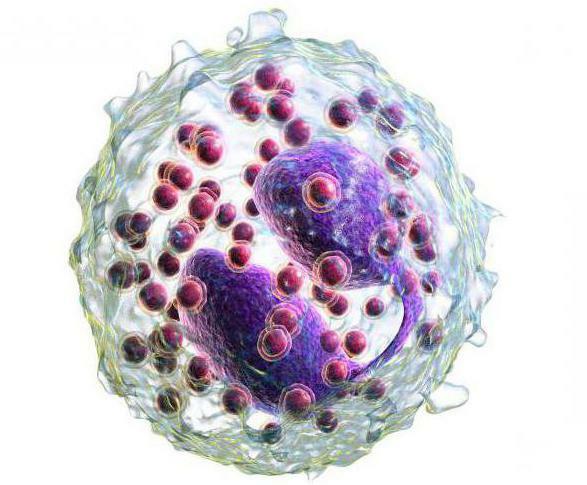 The ECB contains a significant amount of arginine, this allows it to be more dyed with acidic dyes and to give the cell a pink color. The sequence of amino acids is unique enough to be able to isolate it from the rest by using monoclonal antibodies. In addition, the protein is absolutely specific, so that the results of the studies show 100% certainty.

The properties of ECB are the stimulation of the secretion of bronchial tubes by the goblet cells, the inhibition of the proliferation of T lymphocytes, the binding of heparin and the suppression of coagulation. It exhibits toxic properties against parasites, but at the same time can damage the body's cells: nerve, epithelial, cardiac( muscle). 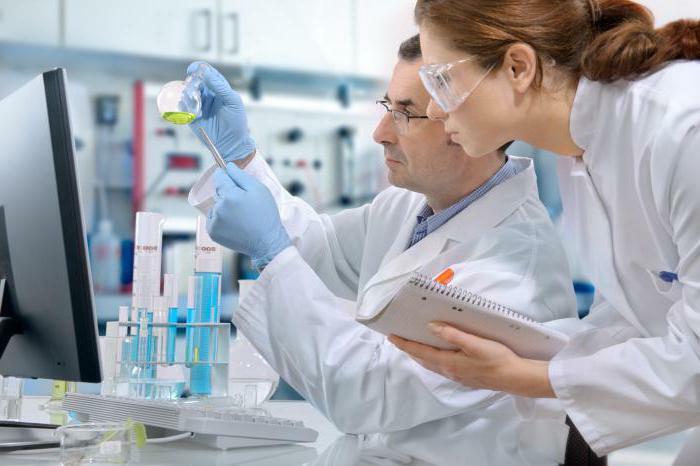 The normal eosinophilic cationic protein in the blood should be no more than 7 μg per liter. Diagnostic sign: in patients with bronchial asthma, it rises to 15-20 μg per liter;if the figure is above the norm by ten times or more, it is helminthiasis or exacerbation of dermatitis. The highest rate - up to 200 μg per liter - may indicate myeloproliferative blood cancer.

Do not panic immediately if you saw in the blood test that the eosinophilic cationic protein is elevated. The reasons for this state are not always life-threatening. For example, such a result can be obtained with an exacerbation of allergies. It is on the dynamics of changes in the indicator of ECP assess the quality of treatment and its success, adjust the dose of the drug, diet.

It is known that eosinophils affect the amount of immunoglobulin E, because receptors on its surface that are suitable for this protein molecule are on its surface. But it also happens that the eosinophilic cationic protein is elevated under normal immunoglobulin E, when the cause is not inflammatory diseases. Sometimes, due to a violation of the response of the body's defense systems, there may even be a decrease in IgE with a significant increase in ECB.

Some diseases not related to allergies, but also occurring with an inflammatory component, give rise to an eosinophilic cationic protein. Among them, bacterial sinusitis, neoplasms in the kidneys, viral infections. 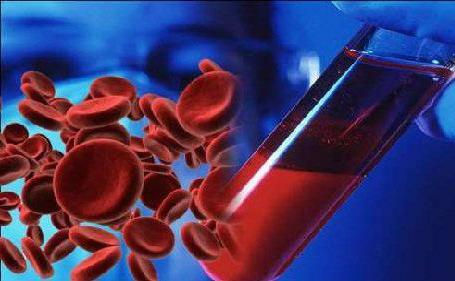 This is a condition that is characterized by an intolerance to any drug substance. It is manifested by a rash on the skin, lesions of internal organs and changes in the picture of blood. Most often this syndrome develops after taking "Phenytoin", "Phenobarbital", "Carbmazepine", "Doxycycline", sulfonamides and others. The concentration of the eosinophilic cationic protein is significantly increased during the DRESS syndrome.

study A physician can prescribe an ECB study when he suspects the patient that he develops atopic bronchial asthma, atopic dermatitis, or allergic rhinitis. In addition, even signs of food allergies or toxic infections, such as swelling, itching, nausea, vomiting, headache and loss of consciousness, can be a sufficiently serious reason for the appointment of this analysis.

Methodology for the analysis of

This is a routine blood test. Eosinophilic cationic protein does not require specific preparation, but one should adhere to the general rules of blood sampling for research. 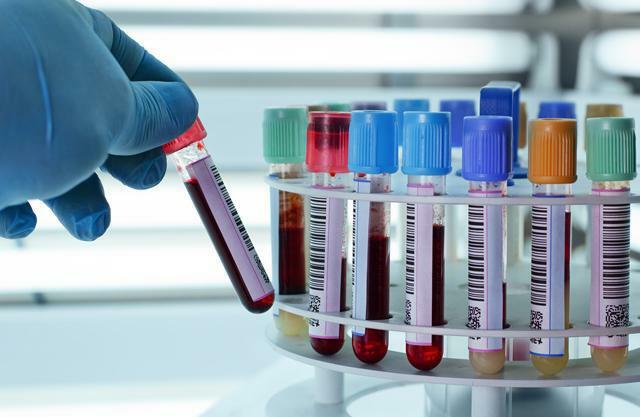 I must admit that this is a rather rare method of examination - an analysis for eosinophilic cationic protein. What the ECB shows in children is not fully understood, its norms are calculated for adults. But we can assume that increasing it( more than 15 ng / ml) will indicate an inflammatory process or helminthic invasion.

Despite the high specificity, sometimes an analysis of the eosinophilic cationic protein is not sufficient to establish a diagnosis. The norm in adults fluctuates over a wide range( from 0 to 24 ng / ml), and the analysis can be false-positive or false-negative, like any other.

Modern doctors are trying to use non-invasive diagnostic methods for early detection and prevention of diseases. Determination of eosinophilic cationic protein makes it possible to predict the development of such serious diseases as bronchial asthma or blood cancer.