Sometimes in clinical practice there is such a phenomenon as parenchymal dystrophy. Pathological anatomy relates them to metabolic disturbances in cells. If to speak in simple language, the process of nutrition and accumulation of nutrients is broken in the body, which leads to morphological( visual) changes. To reveal such pathology it is possible on section or after a series of highly specific tests. Parenchymal and stromal-vascular dystrophy are the basis of many lethal diseases.

Parenchymal dystrophies are pathological processes that lead to changes in the structure of the organ cells. Among the mechanisms of the development of the disease, disorders of self-regulation of cells with energy deficiency, fermentopathies, dyscirculatory disorders( blood, lymph, interstitium, intercellular fluid), endocrine and cerebral dystrophies are isolated.

There are several mechanisms of dystrophy:

- infiltration, that is, the excess transport of metabolic products from the inside of the cell or the intercellular space caused by a malfunction in the body's enzyme systems;

- decomposition, or Phaneroz, is the disintegration of intracellular structures, which leads to disruption of metabolism and accumulation of under-oxidized metabolic products;

is a perverted synthesis of substances that the cell normally does not reproduce;

- the transformation of nutrients entering the cell for the construction of one kind of final products( proteins, fats or carbohydrates).

1. Depending on the morphological changes:

2. By type of accumulated substances:

3. By the prevalence of the process:

These or other parenchymal dystrophies pathological anatomy determines not only the damaging agent, but also the specificity of the affected cells. The transition of one dystrophy to another is theoretically possible, but only combined pathology is possible. Parenchymal dystrophies are the essence of the process occurring in the cell, but only a part of the clinical syndrome that covers the morphological and functional insufficiency of a particular organ. 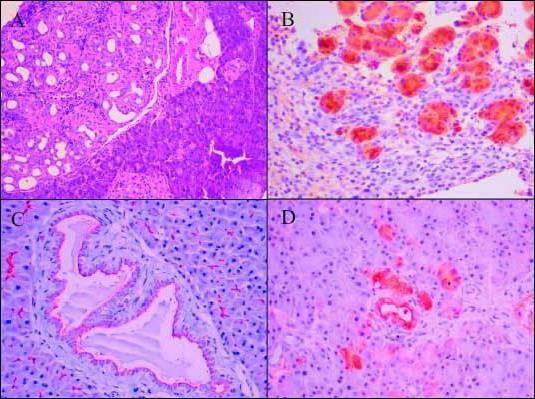 The human body is mostly composed of proteins and water. Protein molecules are a constituent of cell walls, membranes of mitochondria and other organelles, in addition, they are in a free state in the cytoplasm. As a rule, these are enzymes.

Dysbrolysis is otherwise referred to as pathology, as parenchymal protein dystrophy. And its essence lies in the fact that cellular proteins change their properties, as well as undergo structural changes, such as denaturation or collimation. To protein parenchymal dystrophies include hyaline-droplet, hydropic, horny and granular dystrophy. The first three will be written in more detail, but the latter, granular, is characterized by the accumulation of protein grains in the cells, which causes the cells to stretch, and the organ increases, becomes friable, dim. That is why granular dystrophy is also called a dim swelling. But scientists have doubts that this is parenchymal dystrophy. The pathanatomy of this process is such that for the grains it is possible to take compensatoryly increased cellular structures as a response to functional stress. 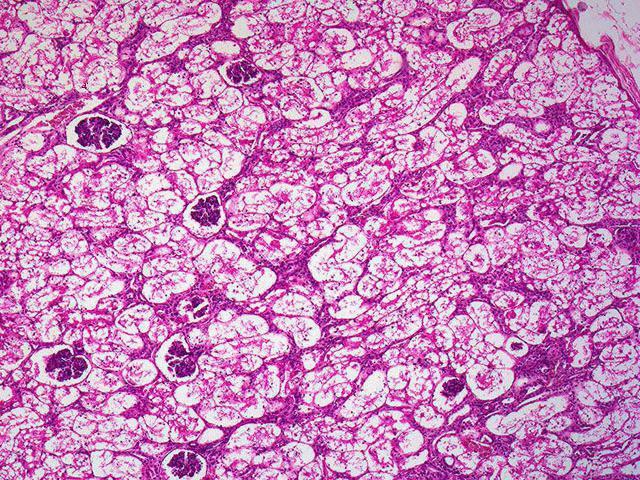 With this kind of dystrophy, large hyaline drops appear in the cells, which eventually merge with each other and fill the entire internal space of the cell, displacing the organelles or destroying them. This leads to loss of function and even cell death. Most often the disease occurs in the kidney tissue, less often in the liver and heart.

During cytology after kidney biopsy, in addition to hyaline accumulation in nephrocytes, destruction of all cellular elements is detected. This phenomenon occurs if the patient develops vacuolar-lysosomal insufficiency, which leads to a decrease in the reabsorption of proteins from the primary urine. Most often, this pathology occurs in nephrotic syndrome. The most common diagnoses of such patients are glomerulonephritis and amyloidosis of the kidneys. The appearance of the organ with hyaline-droplet dystrophy does not change.

In cages, baking is a bit different. During the microscopy, Mallory's bodies, consisting of fibrils and alcoholic hyaline, are found in them. Their appearance is associated with Wilson-Konovalov's disease, alcoholic hepatitis, as well as with biliary and Indian cirrhosis. The outcome of this unfavorable process is necrosis of liver cells, loss of its function.

This type of dystrophy differs from the rest in that new organelles filled with liquid appear in the affected cells. Most often, this phenomenon can be seen in the skin and tubules of the kidneys, in the cells of the liver, muscles and adrenals.

Microscopically, cells are enlarged, their cytoplasm is filled with vacuoles with clear liquid contents. The core is displaced or lysed, the remaining structures are eliminated. In the end, the cell is a "balloon" filled with water. Therefore, hydropic dystrophy is sometimes called a balloon dystrophy.

Macroscopically the organs practically do not change. The mechanism of development of this disease is a violation of colloid-osmotic pressure in the cell and in the intercellular space. Because of this, the permeability of the cells increases, their membranes break up and the cells die. Causes of such chemical changes may be glomerulonephritis, diabetes, amyloidosis of the kidneys. In the liver, cell changes are facilitated by viral and toxic hepatitis. On the skin, hydropic degeneration can be caused by a smallpox virus.

This pathological process ends with focal or total necrosis, so the morphology and function of the organs deteriorates rapidly.

The causes of this type of diseases can be violations of the ectodermal rudiment during embryogenesis, chronic inflammatory changes in tissues, viral infections and a lack of vitamins.

If the treatment begins immediately after the appearance of the first symptoms, then the tissues can still recover, but in far-reaching cases, recovery is no longer possible. Long-existing areas of horn dystrophy can degenerate into skin cancer, and congenital ichthyosis is incompatible with fetal life. 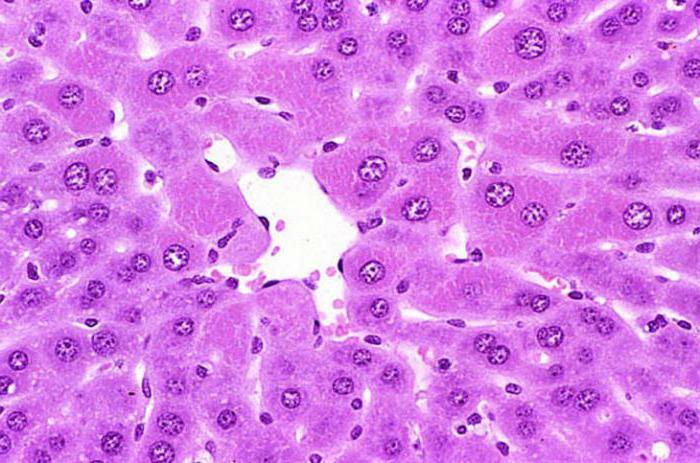 Hereditary parenchymatous dystrophies occur due to congenital fermentopathy. These diseases are also called accumulation diseases, because metabolic disorders cause metabolic products to accumulate in the cells and fluids of the body, poisoning it. The most famous representatives of this group are phenylketonuria, tyrosinosis, and cystinosis.

Target organs for phenylketonuria are the central nervous system, muscles, skin and liquids( blood, urine).The metabolites of tyrosinosis accumulate in the cells of the liver, kidneys and bones. Cystinosis also affects the liver and kidneys, but besides them, the spleen, eyeballs, bone marrow, lymphatic system and skin suffer. 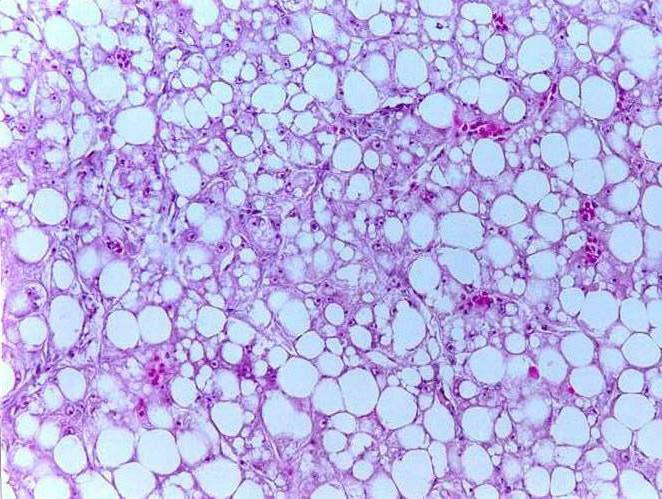 Lipids are contained in each cell, they can be either separately or in combination with proteins and be structural units of the cell membrane, as well as other ultrastructures. In addition, glycerol and fatty acids are found in the cytoplasm. In order to detect them in tissues, special fixation and staining methods are used, for example, black or red navy, osmic acid, Nile blue sulphate. After specific preparation, the preparations are carefully examined in an electron microscope.

Parenchymal fatty degeneration manifests itself in the form of excessive accumulation of fats where they should be, and the appearance of lipids where they should not be. As a rule, neutral fats accumulate. The organs of the target are the same as in the case of protein dystrophy - the heart, kidneys and liver.

Fat parenchymal dystrophy of the myocardium begins with the appearance in the myocytes of very small droplets of fat, so-called.pulverized obesity. If the process does not stop at this stage, then eventually the drops merge and become larger until they occupy the entire cytoplasm. Organelles in this case disintegrate, the striation of muscle fibers disappears. The disease is locally manifested near the venous vascular bed.

Macroscopically parenchymal fatty degeneration manifests itself in different ways, it all depends on the stage of the process. At the very beginning, the diagnosis can be made only under a microscope, but over time the heart increases due to the stretching of the chambers, its walls become thin and flabby, while the cut of the myocardium shows dirty yellow streaks. Pathophysiologists came up with the name for this organ: "tiger heart".

Most often these mechanisms are triggered during hypoxia, infection( diphtheria, tuberculosis, sepsis) and intoxication of the body with chlorine, phosphorus or arsenic.

As a rule, fatty dystrophy is reversible, and cell structure disorders are restored with time. But if the process is badly started, then everything ends with the death of the tissue and the organ. Clinicians distinguish between the following diseases associated with the accumulation of fats in the cells:

- Niemann-Pick disease and others. 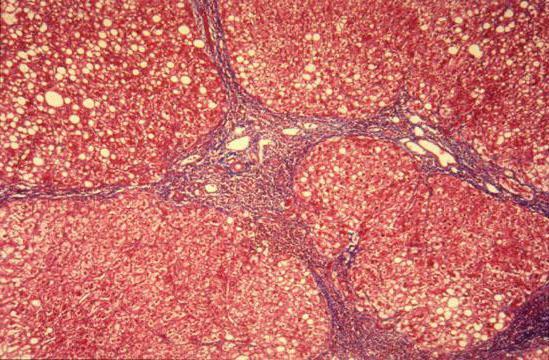 All carbohydrates that are in the body can be divided into polysaccharides( the most common of which is glycogen), glycosaminoglycans( mucopolysaccharides: hyaluronic and chondroitin sulfuric acids, heparin) and glycoproteins( mucins, ie mucus, and mucoids).

In order to identify carbohydrates in the cells of the body, a specific test is carried out - the SHIC reaction. The essence of it is that the fabric is treated with iodic acid, and then with magenta. And all the aldehydes turn red. If it is necessary to isolate glycogen, then amylase is added to the reagents. Glycosaminoglycans and glycoproteins are stained with methylene blue. Parenchymal carbohydrate dystrophies are associated, as a rule, with a violation of the exchange of glycogen and glycoproteins. 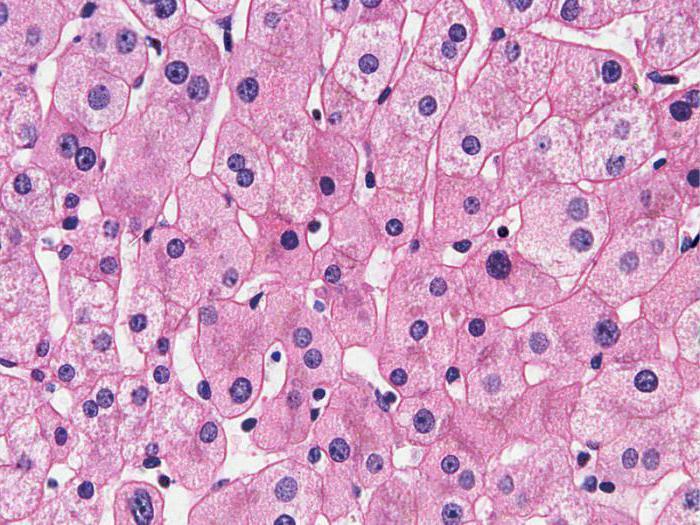 Glycogen is the body's reserves for the "black hungry day".Most of it is stored in the liver and muscles and consumes this energy very sparingly. Regulation of carbohydrate metabolism occurs through the neuroendocrine system. The main role is assigned, as usual, to the hypothalamic-pituitary system. It produces tropic hormones that control all the other glands of internal secretion.

A violation of glycogen exchange is an increase or decrease in its quantity in tissues, as well as appearance where it should not be. Most clearly, such changes are manifested in diabetes mellitus or hereditary glycogenoses. The pathogenesis of diabetes is well understood: pancreatic cells stop producing insulin in the required amount, and the energy reserves of the cells are rapidly depleted, since glucose does not accumulate in the tissues, but is excreted from the body with urine. The organism "reveals" its reserves, and primarily parenchymal dystrophy of the liver develops. In the nuclei of the hepatocytes appear bright gaps, and they become light. Therefore they are also called "empty cores".

Hereditary glycogenoses are caused by a lack or absence of enzymes involved in the accumulation of glycogen. Currently, there are 6 known diseases:

is a disease of Gers;

Their differential diagnosis is possible after liver biopsy and the use of histoenzymatic analysis. 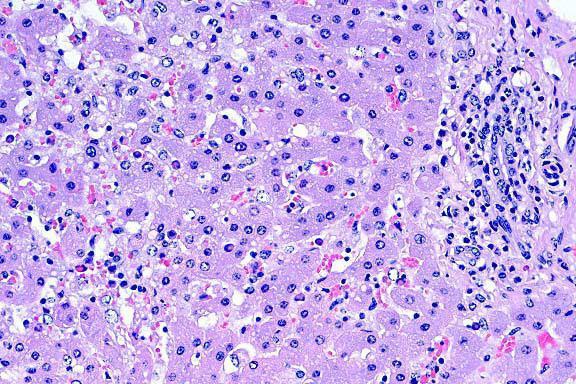 This is a parenchymal dystrophy caused by the accumulation in the tissues of mucins or mucoids. Otherwise, these dystrophies are also called mucous or mucoid, due to the characteristic consistency of the inclusions. Sometimes they accumulate on true mucins, but only substances similar to them that can become denser. In this case, we are talking about colloid dystrophy.

Microscopy of tissue allows to determine not only the fact of the presence of mucus, but also its properties. Because the remnants of cells, as well as the viscous secret, prevent the normal flow of fluid from the glands, cysts are formed, and their contents tend to be inflamed.

The causes of this kind of dystrophy can be very different, but most often it is a catarrhal inflammation of the mucous membranes. In addition, if the hereditary disease, the pathogenetic pattern of which fits well into the definition of mucosal degeneration. This is cystic fibrosis. It affects the pancreas, intestinal tube, urinary tract, bile ducts, sweat and salivary glands.

The resolution of this type of disease depends on the amount of mucus and the duration of its release. The less time has passed since the onset of the pathological process, the more likely that the mucosa will recover completely. But in some cases, there is a sloughing of the epithelium, sclerosis and a violation of the function of the affected organ.