Breast cancer is a malignant formation that threatens not only the health and beauty of a woman, but her life as well. The number of sick patients is growing in Russia by leaps and bounds. If 30 more years ago for a year doctors registered 6 thousand cases of disease at the last stages, today this figure has increased two and a half times. In this article, we will try to describe in detail what threatens the third degree of breast cancer. The woman's lifespan, her treatment, the symptoms that she feels, what is the prevention of a dangerous disease - read all about this further.

What is the risk of cancer of the third degree?

First we will understand what kind of ailment it is. Doctors say that breast cancer in women in 3 stages is a fairly large tumor. In diameter, it reaches five centimeters, while it can spread to the skin: the epidermis darkens, swells, takes the form of a lemon peel. In the lymph nodes in the armpits there are metastases: they are soldered and dense, considerably enlarged in size. The tumor in the first two stages often goes unnoticed, so the woman turns to the doctor when the disease is already actively progressing. 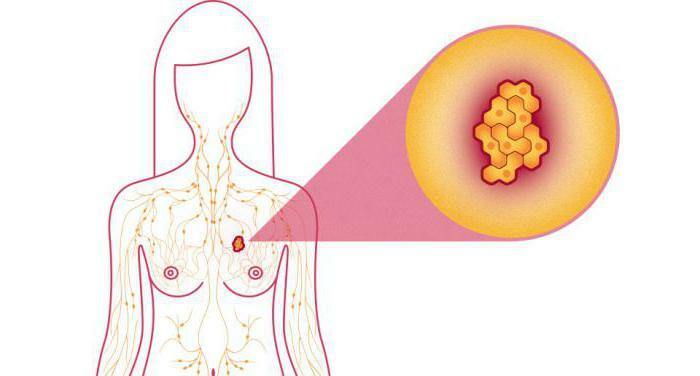 Cancer of the third degree is a systemic disease. This means that it is not enough just to cut out malignant education for its treatment. Most likely, the tumor has already allowed microscopic metastases to the internal organs. Accordingly, this course of events threatens to relapse, the development of cancers in other locations, amputation of the breast, in particularly neglected cases, the disease can result in a fatal outcome. If the cancer is not treated after the operation, the relapse occurs in 100% of cases.

As we can see, 3 degrees of breast cancer can lead to irreversible consequences. The life span of a patient depends on her awareness: the more she knows about the ailment, the sooner will notice the negative processes in her body. In this case, doctors focus on factors that can lead to the formation of a tumor. Firstly, this is the way of life of a woman. The risk of childless elderly ladies or those who first became pregnant after 30 years old, young ladies who have frequent contacts with a source of radiation, are prone to eating fatty foods. The tumor threatens patients older than 40 years, genetically predisposed to the disease, as well as those who have early menstruation( up to 12 years) and later came to menopause. 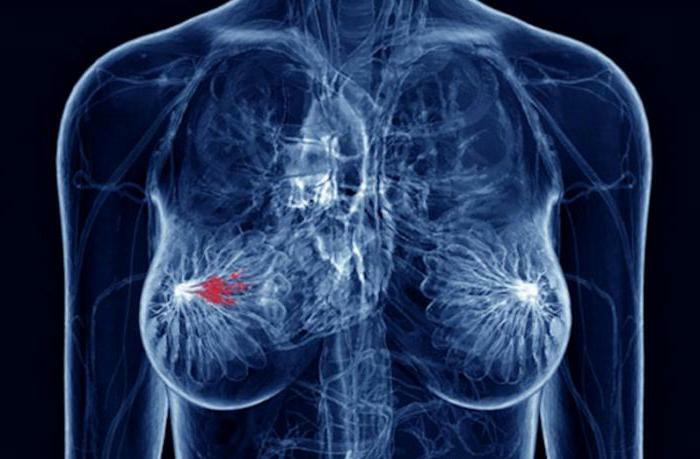 Secondly, the level of health affects the formation of a tumor. Cancers are subject to patients who have a high level of estrogen in the blood, metabolic disorders, obesity, endocrinological problems, thyroid disorders. Under the supervision of a doctor, there should be women who have had cancer of the genitals and breasts, as well as those that take oral contraception, which have changes in the mammary gland.

The disease of breast cancer does not just happen. It can be preceded by a variety of pathological processes in tissues. For example, the formation of foci of fibro-cystic mastopathy due to repeated dyshormonal hyperplasias. Their causes are the following: all the same endocrine disorders that develop after abortions, breast enlargement operations, diseases of appendages, inadequate feeding of a newborn baby.

Unfortunately, the risk of "earning" the disease is directly proportional to the size of the breast. The bigger the bust, the more closely you need to monitor its condition. The development of cancer is also promoted by anatomical abnormalities, disorders that were formed even when the woman was an embryo and was in the womb of the mother. It is about the presence of additional lobules of glandular tissue, a congenital or genetic tendency to benign tumors - fibroadenomas. All these formations should be surgically removed, as they are difficult to distinguish from the beginning cancer.

It's sad, but usually in the late stages of the ladies notice breast cancer. Symptoms and symptoms are manifested in different ways. The main thing is a seal, which can be felt in the chest during a palpation. It is not necessarily a malignant formation, but it will not be superfluous to visit a polyclinic. The localization of tumors can be different: both in the left and in the right breast. Only in 2.5% of cases there are bilateral cancers: the node in the second mammary gland can be either an independent formation or a metastasis. In half of the patients, the cancer "loves" being placed from the outside near the armpit. 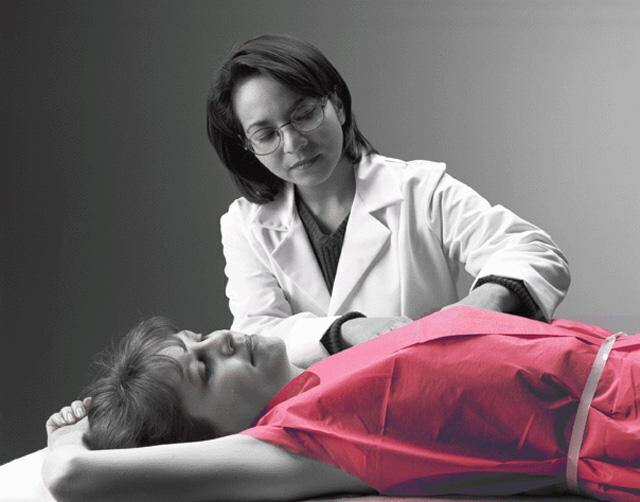 Breast cancer, the symptoms and symptoms of which are not manifested in mild forms of the disease, at the third stage the woman is troubled by dense formations. They do not hurt, but create discomfort: growing into the chest wall, become hard as a stone, and the bust itself often turns into a motionless statue. If the skin is affected, then the ailment is noticeable to the unaided eye: the epidermis cover is deformed, drawing in the nipple. From it can go bloody or whitish discharge. When lymph nodes are affected, they increase and create inconveniences in the armpit area.

Usually, 3 degrees of breast cancer, the lifespan during which depends on the competent actions of the woman and the doctor, has several varieties. In addition to the standard clinical picture described above, the tumor can take unusual atypical forms:

All these forms do not look like normal cancer. But for an experienced specialist to diagnose this or that type of disease will not be difficult.

What happens in the body?

Breast cancer in women in histological structure refers to adenocarcinomas or the so-called solid form of the disease with a multitude of transitional forms. Tumors are lobular and protocol, depending on the contours and distribution. It is worth knowing that, in addition to the common malignant formations in the breast, non-epithelial cancers can arise, for example, sarcoma. This happens quite rarely - only in 1% of cases. Their diagnosis and treatment are similar to an ordinary tumor. 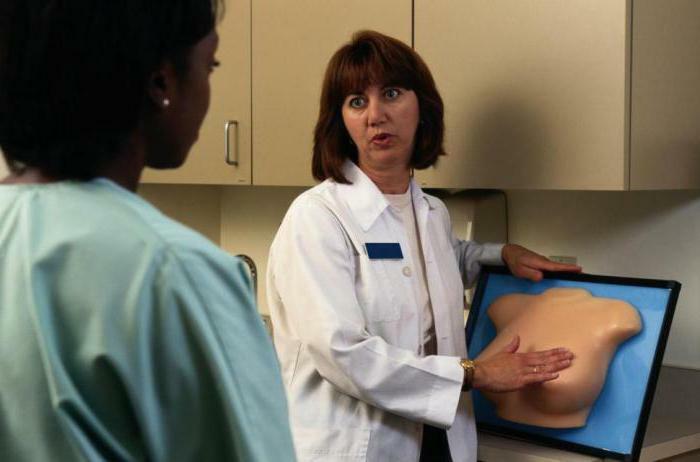 Breast cancer can be divided into two types depending on the presence or absence of a particular state of estrogen receptors( ERTS).It can dramatically change the course of the disease, often it is on it that the therapy strategy chosen by the doctor depends. Those tumors that have ERTS are more characteristic of menopause. The same applies to more primary cancers - about 70%.ERTS-negative malignancies are more common in girls before the onset of menopause.

metastases These are very dangerous to health and life education, which are often found in the late stages of the disease, when a woman is diagnosed with breast cancer. Metastases are the same tumor cells that, with the help of a lymph flow( and it is very developed in the breast tissues) are carried to the lymph nodes. The initial malignant lesions primarily affect the axillary, subscapular and subclavian areas of the body. Then the metastases spread to the neck area, the second breast and the area around it. Sometimes metastases appear earlier than the cancer itself was detected. In this case, you should immediately conduct all the examinations to exclude the cancer of the breast. 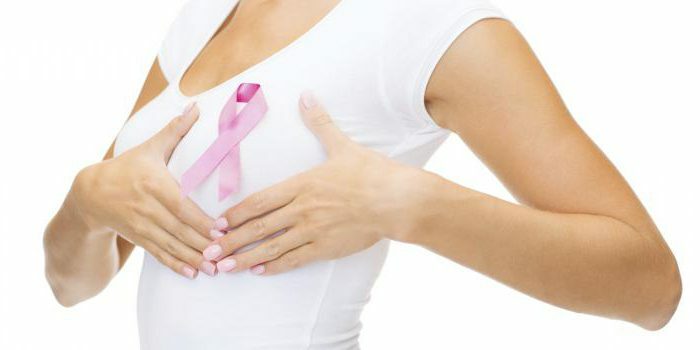 Hematogenous way - through the circulatory system - metastases get to other organs where they begin to parasitize. Usually they are located in the brain, liver, lungs, pleura, bone tissues. If the formations are hooked on the skeleton, then most likely they will "settle" in the pelvic region, on the skull, spine, ribs, femur and humerus. In this case, the woman will feel aching pains that are easily confused with disorders of the musculoskeletal system. In the future they will become painful, acute and intolerable if one does not cure their original cause - cancer.

Breast cancer therapy can be quite successful if the disease has only begun to develop. In other cases, more aggressive methods of treatment are used. But before deciding on possible ways, the doctor must make the correct diagnosis. He must confirm or debunk the assumption of cancer, as well as determine the type of tumor that he is dealing with. In addition, the doctor determines the stage of the disease and the location of education. The diagnostic methods include: ultrasound, MRI( magnetic resonance therapy) and mammography - chest x-ray.

Also, a woman will be asked to do a biopsy - a histological analysis of the affected area of ​​the tissue. The procedure is painful, therefore it is carried out using local anesthesia on an outpatient basis. In addition, the patient is sent to the ultrasound of the abdominal organs, radioisotope study of the spine, lung X-rays. In addition, you will need to pass all the general tests and pass a finger examination of the lymph nodes.

It depends on the size and type of tumor, the presence of metastases. If a woman has too late a breast cancer, surgery will be unavoidable. This applies to the third and fourth stages of the disease. To begin with, the tumor will try to "kill" with the help of chemotherapy or hormone therapy. Completely get rid of malignant education will not succeed, but you can make it operable and achieve reduction in size. As for the surgical intervention, the doctors are trying to completely cut out the tumor and diseased lymph nodes. The scope of work can vary: depending on the size of the education. Sometimes you have to cut a whole breast. 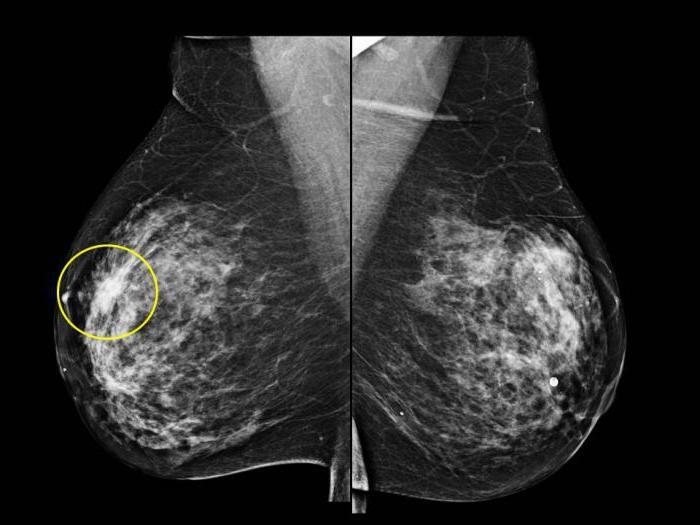 After surgery, breast cancer is prescribed radiotherapy. The goal is to avoid relapse. In the first 5 years after the intervention, the oncologist should be visited regularly - once a quarter. He evaluates the effectiveness of treatment and controls the patient's condition. A woman may be prescribed medication, which involves the use of a course of medications.

Tumor does not always lead to death. If a third degree of breast cancer is detected in time, the life expectancy can increase significantly. The literacy of the doctor and the lack of metastases also contribute to the positive outcome of the problem. Unfortunately, if the ailment is neglected, the patient will live only three years. As for the early stages, the five-year survival rate is 90%. 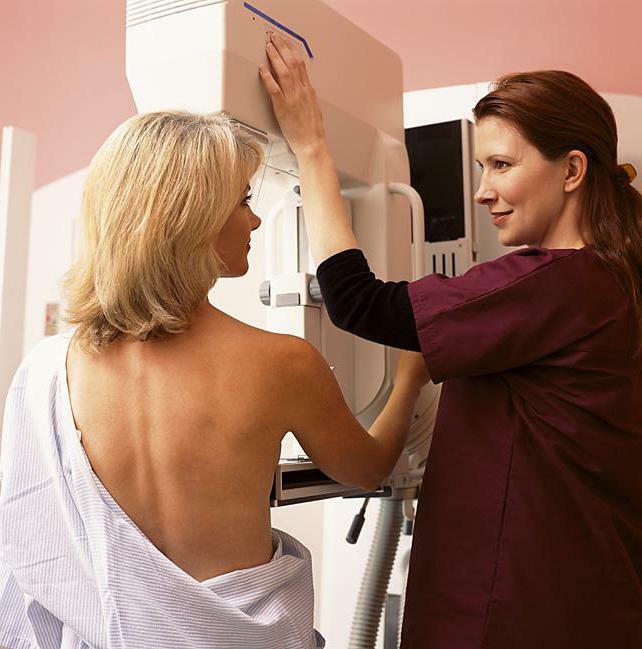 In order not to bring the disease to such a threatening state, it is enough to follow preventive measures. Firstly, in young years, the girl should monitor her health: not to do abortions, give birth to children on time, properly breastfeed them, and also eat right, observe a balanced regime of the day and play sports. Secondly, after 30 years, it is necessary to constantly examine your breasts: feel it, looking for suspicious seals. Thirdly, a systematic consultation of a specialist and the passage of a mammogram is necessary: ​​after 40 years - once a year. Warn disease is always easier. Remember this and be healthy.