Slightly less than half the body weight of a man is muscle. Types of muscles are divided depending on the purpose, the functions performed, the subordination of the nervous system, the structure of the fibers. Without them it is impossible to move around in the surrounding space, to maintain normal processes of vital activity and the constancy of the internal environment. 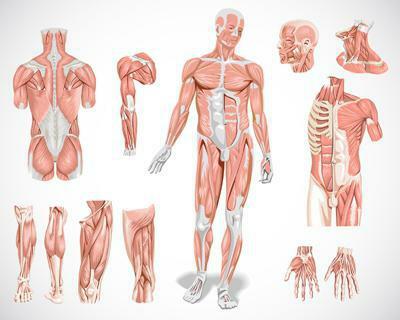 The skeleton and muscles form the human skeleton. Bones play the role of load-bearing structures. Skeletal muscles are attached to them using connective tissues. They, unlike bones, are elastic and can be deformed.

Their main functions - reduction and relaxation - allow people to move around in space. The skeletal muscles responsible for this process work according to the principle of levers. The passive part of the muscle( tendon) is attached to the bone at the optimum point for the performance of its work. The other part is connected to the pair skeleton.

In the junction of the bones is the joint, that is, their connection is mobile. With a contraction of the muscle, the force transmitted through the tendons will cause the bones to move. 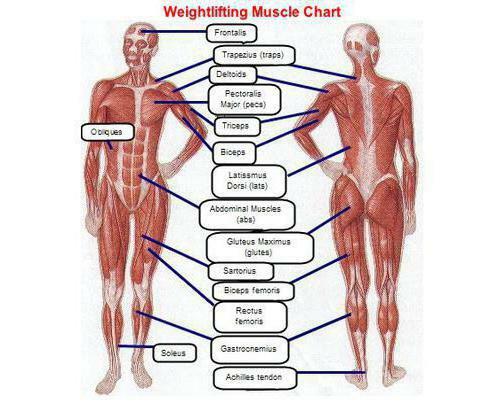 The human body is segmented. Muscles( types of muscles are presented in the photo above) are not located in a layer, they are divided into sections. Coordinated work requires control. When the limb moves, it is not just a contraction of a particular muscle. At the same time, her antagonist relaxes. When the process is reversed, the functions change: the flexor relaxes, and the extensor returns the part of the body to its original position.

Consistency of movement of skeletal muscles is controlled by the brain. This process is to a certain extent subject to human consciousness. And although the commands for basic movements are not given literally, they are still present in intentions, and their brains instantly transform into signals that are understandable to the muscles.

There is another system of muscles that the will of man is not completely subject to( involuntary).Basically it is the musculature of the internal organs. The heart muscle is generally distinguished in a separate group. Its reduction man does not control and under normal conditions does not notice. The functions of the muscles of the stomach, bladder, intestine, and vessel walls are different. But their main task is to maintain the tone of a particular body and ensure that it can perform the necessary functions. 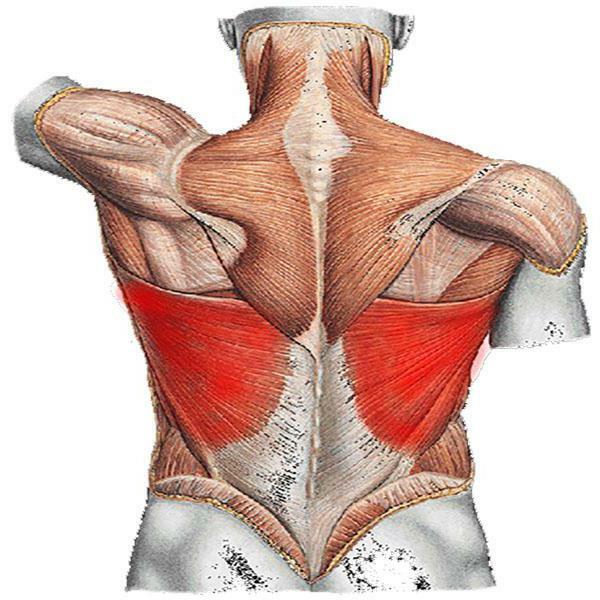 Classification is made according to several factors. The main division is related to the general purpose. Isolate the musculature of the skeletal and internal organs. Arbitrarily obeyed muscles have mainly transversely directed fibers, and involuntary( internal) muscles are smooth.

Depending on the location, the muscles of the head, limbs, and trunk are divided. From what work they perform, among them define flexors and extensors. By the nature of activity among the muscles distinguish synergists, that is, performing similar functions, and antagonists acting in opposition. In form they can be: short and thick, long and thin. The widest muscles are related to the flat musculature of the back. They are responsible for pulling the shoulder to the trunk and drawing the arm back to the spine axis.

If the muscle, when contracted, brings the limb closer to the body, then it is defined as the leading one. In the opposite case, they speak of a diverting role. If the body part( head, forearm, shoulder) is rotated, they are classified as rotating.

There is a division according to the number of large bundles of fibers: biceps( double-headed), triceps( extensor of the hand), quadriceps of the thigh. There are four components of this muscle( types of muscles: straight, lateral, medial, intermediate).The largest is the diaphragm, the musculature of the buttocks, legs and back. The smallest is in the ear. The strongest ones are on the calf( calf) and chewing on the head.

Muscle tissue in the human body consists of cells. They have an elongated shape and are capable of contraction because of the presence of special organelles( myofilaments) in them.

There are two kinds of fibers: white and red. This classification is relative. But the difference can be understood by the example of chicken meat( breast and shin).The first is white. Breasts in chickens do not work as often as the shins. Wings she rarely waves, but they are capable of a sharp surge of activity, giving the opportunity to rise into the air.

On the other hand, the whole life passes. Their tissues can work for a long time, but are not capable of such a sharp surge of activity. The calf muscles in the hens are densely permeated with a network of capillaries( hence the color) because they need more nutrition( constant and sufficient) to maintain the tone.

By the same principle, the musculature is also built up in humans. There is evidence that the average person has white tissue and red is in a ratio of 4/6.The athletes sprinters have a different picture. Their fast white muscles have an advantage. In part, this is achieved by training, but not everyone is able to transform so much. 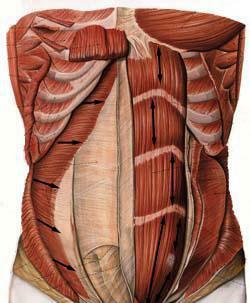 Skeletal muscles are characterized by the rate of contraction. The cells of their tissue are relatively large, elongated and multinucleate( up to 100 or more).If we consider the cut under a microscope, it looks as if it were striated alternating strips of light and dark color( cross-striped).The smooth muscle tissue consists of mononuclear cells. They are more homogeneous and not so elongated.

Skeletal musculature is collected from bundles of the first( thinnest), second( larger), etc. order. From the method of placement in relation to the axis of the spine, straight muscle( straight muscle of the press) is divided, oblique( abdomen: internal and external) and transverse( perpendicular to the vertical axis - transverse muscle of the breast).

Depending on the location around the tendons, they are divided into parallel( spinous) and circular( mouth, sphincter of the rectum, vagina).

The tissue of the heart muscle is special. It consists of binuclear cells( cardiomyocytes).They are intertwined with each other, so that they coalesce with each other, connecting with the cytoplasm. The peculiarity of cardiac musculature is the ability to work rhythmically and constantly.

Even with a seemingly relaxed state, the muscles are still ready for immediate reduction. This condition is called tonus. Nervous impulses constantly enter all organs from the brain. In the relaxed state, the quantity decreases, but there are enough of them to exchange information. Without such control, it would not be possible to maintain the body in a balanced and stable position.

The source of energy for working muscles is adenosine triphosphoric acid( ATP).It is formed as a result of a complex cycle of cleavage of glycogen. The cells are supplied with blood flow. From this it follows that all the basic muscles should be densely braided by capillaries, arteries and veins.

They can not work constantly, they need rest. If this is neglected, then the performance decreases, which is manifested by a violation of the conductivity of the impulses and response to nervous excitation. Under intensive loads, metabolic products accumulate, which prevents a uniform distribution of impulses.

The human body is built on the principle of bilateral symmetry, so all the basic muscles are paired or consist of two halves. Those located on the head participate in mimic cuts, which give the opportunity to express emotions( joy, sorrow, fear, pleasure).Another important function is the work of the mouth apparatus( chewing, swallowing).They also provide the work of the eyes( movement of the eyeballs, blinking of the eyelids).

At the neck, the musculature lifts and lowers the head, turns it and supports it in the axis of the spinal column. On the torso, the front and back parts are distinguished. Divide into the upper part( the work of the shoulder girdle);thoracic( breathing);abdominal( stomach tone).The largest part of the back covers the broadest muscles. In addition to participating in extension of the arm and circular movements of the shoulders, they form behind the back, below the ribs, the skeleton of the body, covering the kidneys and liver. Active during swimming, work with a deep breath, lifting the lower ribs.

In front, in the upper part, the largest pectoral muscles are leading in area of ​​coverage. In the abdominal region is a deep-lying and thin transverse muscle. It is opposed to gravity and maintains the constancy of the environment of the internal abdominal cavity. Together with the press provides the plane of the abdomen.

The gluteus muscle( large, medium, small) occupies an important place in the joint of the trunk and lower extremities. On the hip it is possible to distinguish half-web, double-headed, short, long and large leading. On the lower leg - calf, soleus. And on the foot - flexors and extensors of the fingers. 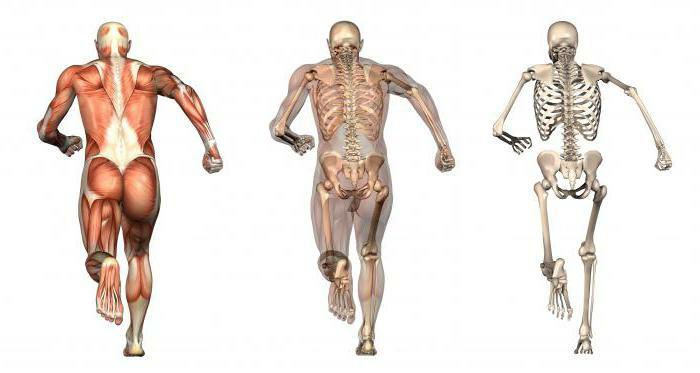 Role for the body

Without proper activity, muscles in a person can atrophy. It is noted that with minimal load cells are updated once in a week or two. When doing sports, this happens more often. The growth of muscle tissue with loads with additional weight is due to the fact that some of the muscle fibers are torn. The organism seeks to recover, new cells grow, the connections are renewed. This is accompanied by an increase in their volume and mass.

In addition to exercising cardiac activity, maintaining the shape of the body, providing a vertical position and movement, the musculature makes possible a number of other equally important processes: speech( larynx and tongue), respiration( diaphragm), digestion( esophagus, stomach, intestine tone).Also, the removal of metabolic products( bladder, sphincter of the rectum) is ensured.

If the activity of involuntary musculature is not controlled by humans, then an arbitrary( basic muscle) can even train. Well, a healthy lifestyle and maintaining the body in good physical shape, as you know, is a pledge of well-being and peace of mind.

Now you know what role the muscles play in the body. Types of muscles differ in their structure and functions.