Cyst of the right ovary endometrioid: symptoms and treatment

The treatment of organs performing reproductive functions occupies a special place in medicine. After all, many diseases can lead not only to a violation of the rhythm of life, but also to the inability to conceive and give birth to offspring. Especially often with different complaints to the doctor are addressed by the fairer sex. That is why it is so important to visit a gynecologist twice a year for routine examinations. Such preventive measures allow to detect this or that pathology at the earliest stage of its development. 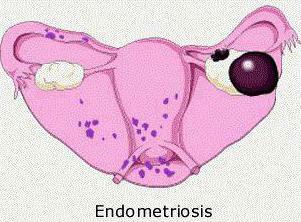 Before saying what is the endometrioid cyst of the right ovary, it is worth noting that education does not appear on its own. It is always a consequence of a disease called endometriosis. In the early stages, the pathology does not manifest itself in any way. That's why such a disease is called the insidious enemy of women. After all, the progression of pathology leads to very unpleasant and serious consequences.

Endometriosis is a purely female disease. With it, the internal mucosal layer of the uterus - the endometrium - grows. It is worth noting that the cells appear where they should not be. During the endometriosis, the described tissue affects the ovaries, fallopian tubes, abdominal cavity, intestines. Also, the endometrium can settle on the kidneys and liver. Less often, the growth affects the lungs and organs located above.

Endometrioid cyst of the right ovary, the photo of which is presented to you, appears solely as a result of external endometriosis. Many patients confuse it with the internal one. To clarify the situation a bit, it is worthwhile to say a few words about this pathology.

Internal endometriosis is called endometritis. During the course of this disease, there is an increase in the mucous layer of the uterus. In this case, the endometrium does not go beyond the limits of the genital organ. With the external form, as you already know, the tissues of the abdominal cavity are affected. Cyst of the right ovary( endometrioid) is formed already at the 3-4th stage of the disease. 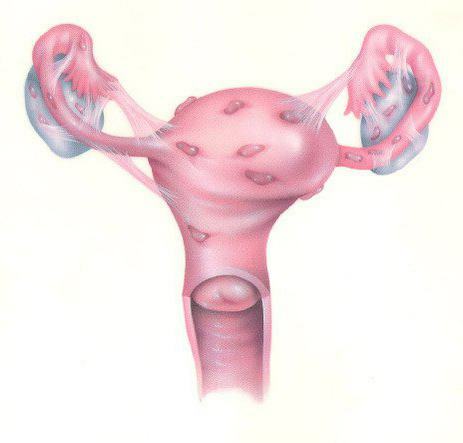 Cyst of the right ovary endometrioid is found in 80 percent of cases of such neoplasms. According to statistics, other tumor processes often appear on the right side. Why this happens, until the end is still unknown.

Scientists tend to assume that the right ovary is filled with a large number of vessels and capillaries. This is where the bulk of the ovarian reserve is laid. That is why different cysts are formed here. The tumor of the left ovary manifests itself not as clearly as from this side. However, it can also form in a woman of reproductive age.

Cyst of the right ovary endometrioid: symptoms of the pathology

As you already know, endometriosis can not show itself in any way for a long time. At the 1-2 stage most of the fairer sex feel fine, they do not bother. However, with the formation of a tumor, everything changes. It is worth noting that the described neoplasm may increase in size very quickly. What can a woman complain about such a pathology? Consider the main symptoms of the disease: 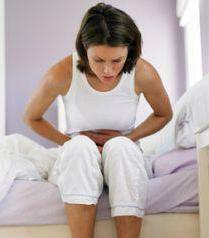 What can the doctor detect?

If you are confronted with one of the above signs, then it's worth to go to the doctor as soon as possible. Remember that delay can threaten the transition of the disease to a later stage. In such a situation, getting rid of the problem will become almost impossible. In addition to those symptoms that a woman discovers, there are other signs of the disease. They can already be noted by a specialist during the diagnosis:

If confirmed for all signs of the endometrioid cyst of the right ovary, treatment should be mandatory. In the absence of correction, a woman may face even more unpleasant symptoms and various complications. 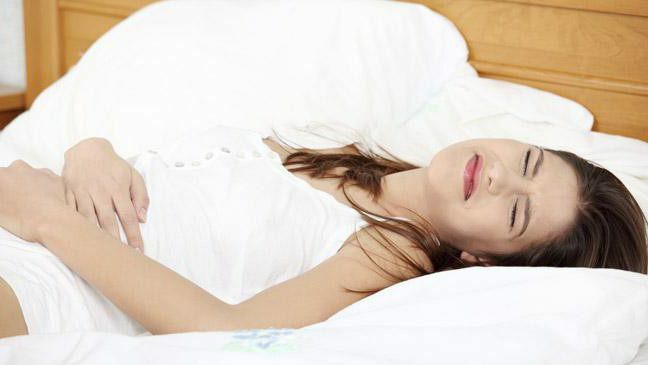 Correction for a woman should always be determined by a specialist. Do not rely on the experience of your friends and seasoned friends. Those drugs that are useful to them, you can cause even more harm.

Treatment of pathology can be carried out in different ways. Doctors choose expectant tactics, medical correction method, surgical intervention. Also, some representatives of the fair sex try to cope with the problem using folk methods. It is worth noting that gynecologists are very suspicious of such. Doctors warn that some drugs and prescriptions can only aggravate the condition of a woman. Let's consider the basic methods of elimination of a neoplasm.

This method is used by doctors when there is no confidence in the correct diagnosis. Within a few months, a woman is closely monitored. The patient is shown regularly to take tests and undergo ultrasound. If the cyst began to decrease on its own, then the diagnosis is most likely incorrect.

When in fact a woman has an endometrioid cyst of the right ovary, the consequences will be as follows. Neoplasm will gradually become larger and acquire clear outlines during ultrasound diagnosis. Also an experienced specialist with the help of good, modern equipment will be able to view the cameras in the cyst resembling honeycombs. This again confirms the development of endometriosis and the need for treatment. 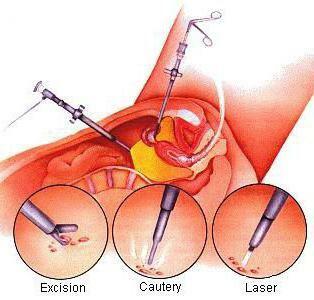 If an endometrioid cyst of the right ovary is found in a woman, the operation is unavoidable. Usually for this purpose choose a laparoscopy or a laparotomy. It is worth noting that the first mode of intervention is less traumatic. During the procedure, three punctures are made in the abdominal cavity of the woman. If the cyst is huge, doctors prefer laparotomy. In the process of this operation, the peritoneum is cut and further removal of the tumor is performed.

Both interventions are performed under general anesthesia using an IVL apparatus. The existing foci of endometriosis are cauterized. Also during the operation the doctor neatly dissects spikes and produces the toilet of the abdominal cavity. This is necessary to prevent the recurrence of the disease. After laparotomy, the patient should stay in the hospital for up to two weeks. While laparoscopy allows you to go home within 24 hours. Forecasts after the intervention are favorable. 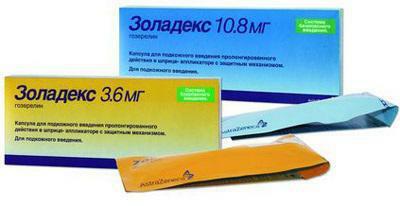 If you have an endometrial cyst of the right ovary, the causes of this pathology lie in the violation of hormone production. Based on this, we can conclude that a positive effect will give hormonal treatment. Indeed, such therapy is carried out. However, it does not allow to completely remove the formed cyst. Hormonal correction helps to reduce the amount of pathology. It is often used before surgery. Treatment is also performed after surgery. It can be different. Doctors prescribe more or less strong hormonal compounds.

"Zoladex" and "Buserelin Depo" medicines have become very popular in the treatment of endometriosis and cysts. Also sometimes apply "Zhanin", "Diana 35" and other drugs. The purpose of these compounds is to block the work of the ovaries. This completely stops ovulation and menstruation. The medicine introduces the woman into the so-called artificial climax. The duration of therapy is from several months to a year. Everything depends on the stage of the disease and the final goal. 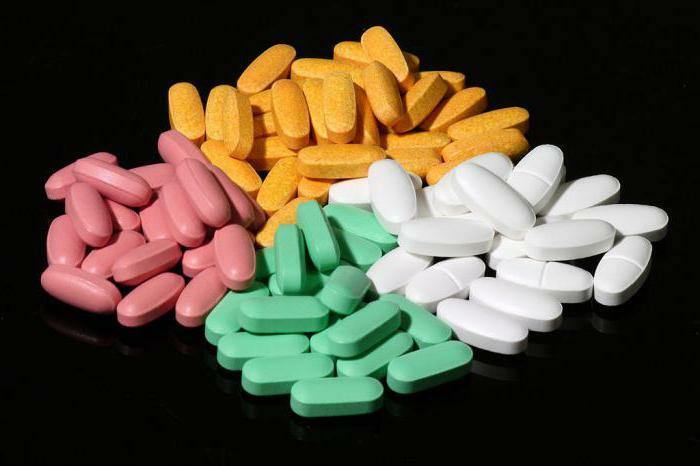 If an endometrioid cyst of the right ovary is found, can I get pregnant? Physicians in most cases negatively answer this question. Indeed, conception in the late stages of the disease is unlikely. However, it can not be ruled out. There are women who get pregnant safely. Despite the constant threat of miscarriage during the entire term, the fairer sex is born and gives birth to offspring.

This method also can be attributed to the treatment of endometriosis. After all, during the pregnancy, the ovaries do not function, there is no menstruation, and consequently, the existing foci simply fade. After giving birth, a woman is recommended to maintain a prolonged lactation, during which there will also be no menstruation. After completing breastfeeding, consult a doctor. Perhaps, you will still need to cure the cyst.

Traditional methods of healing from the endometrioid cyst

If you have an endometrioid cyst of the right ovary, treatment with folk remedies is not recommended. Often women use for correction various herbs( boron, red brush, sage).They all have an indirect effect on the hormonal background. However, the tumor can not be cured.

Also, representatives of the weaker sex use biologically active additives. These include "Indinol" and "Epigallat".In this combination, the manufacturer promises complete healing from endometriosis. Doctors do not advise trusting such information. The endometrioid cyst can not resolve itself. Sometimes it only decreases in size. Remember this.

Some women also testify that coffee helped to heal the disease. Indeed, caffeine favorably affects the inner layer of the uterus. However, it is simply impossible to cure endometriosis and ovarian tumor with this product. Failure to do so is also a variety of tampons, baths and lotions. Non-traditional medicine encourages the use of leeches.

A small summary: a few words about pregnancy

If you have a cyst( endometrioid) right ovary, you can get pregnant! However, it is rather difficult to do this. The conception does not occur because of a disturbed hormonal background. Even if ovulation occurs and there is a conception, there is a high probability of ectopic pregnancy. In the abdominal cavity, where a fertilized cell enters, there are a lot of foci of the endometrium, similar to the one located in the genital organ. It is here that the fetus, by mistake, can be fixed. It is worth noting that this condition is very dangerous for a woman's life. Ectopic pregnancy requires urgent surgical intervention.

That's why when planning pregnancy, you need to undergo a thorough examination and make sure that there is no endometriosis. If it is found, but you managed to conceive the baby, it is necessary to make sure that the fetal egg develops in the uterine cavity as soon as possible. Otherwise, daily monitoring using ultrasound. If the embryo is absent for a period of 6 weeks from the last menstrual period, then this is an occasion to worry and suspect an ectopic pregnancy.