Some infectious diseases can not be won easily. They can not only seriously disturb the state of health, but even create a real threat to the life of the patient. In such cases, truly high-quality and effective medicines should be used that can successfully defeat a dangerous infection and restore health. To combat various infectious diseases, the "Imipenem + Cilastatin" remedy is often used. According to reviews of patients and doctors, it is incredibly effective. Before deciding to start treatment with the drug, it is necessary to find out as much information as possible about the preparation "Imipenem + Cilastatin": the trade name of the drug, the features of the action and the method of its use. Who should use this medication? What are the contraindications? What side effects can you expect? All this information you can learn by reading this article. 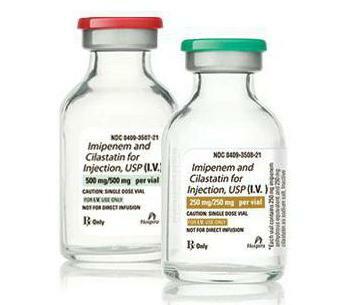 The composition of the preparation "Imipenem + Cilastatin" includes an equal combination of cilastatin( which is an inhibitor of the enzyme dihydropeptidase of the kidneys) and sodium salts of imipenem( antibiotic).In one bottle of the drug, as a rule, contains five hundred milligrams of both substances.

The considered drug "Imipenem + Cilastatin" is available in the form of powder for injection( for intravenous administration) in vials of various sizes, namely: sixty and one hundred twenty milliliters. This powder must be dissolved in a solution of( buffer) sodium hydrogencarbonate.

In cases where the drug is prescribed for intramuscular injection, vials containing 0.5 or 0.75 grams of imipenem and cilastatin should be purchased( depending on the dosage that has been prescribed to the patient by the attending physician). 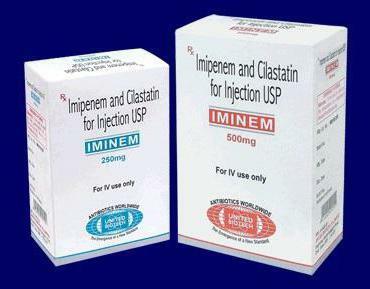 The effectiveness of the drug Imipenem + Cilastatin is determined bya successful combination of the two active components. The first, imipenem, is a special beta-lactam antibiotic that actively destroyspathogenic bacteria( thus having a bactericidal effect).This substance has a rather wide spectrum of action. And this means that many pathogenic microorganisms are sensitive to its effects. The second component, cilastatin sodium, actively affecting the enzyme, which decomposes imipenem in the kidneys of the patient's body, suppresses its action, which contributes to a sufficient increase in the concentration of the above antibiotic in the unchanged form in the patient's body. Consequently, the overall effectiveness of the drug "Imipenem + Cilastatin" is repeatedly increased.

To achieve the greatest effect and to avoid any negative consequences of therapy, it is important to carefully follow the recommendations for the use of the drug. The drug "Imipenem and Cilastatin Jodas" is injected into the patient's body intravenously( drip).

Although the instruction suggests averaged doses for the use of the drug, it is important to adjust the therapy regimen directly to the attending physician before starting the treatment, which can correctly establish the appropriate dosage taking into account all the individual characteristics of the patient and his anamnesis.

The dose that contains the instruction for the use of the substance in question for the medicinal product "Imipenem + Cilastatin" is intended for those patients whose body weight exceeds seventy kilograms. For those patients whose body weight is less, the working dose of the drug should be proportionally reduced( it is important that this process is managed by a competent specialist).

For an adult patient, the average daily dose of the drug "Imipenem and Cilastatin Jodas" is one to two grams, provided it is divided into three to four injections. At the same time, the maximum dose that is acceptable for administration for one day is four grams or fifty milligrams per kilogram of body weight( the choice should fall on the lower of the two allowed doses).

If a medicinal product is used to prevent postoperative infections, it is important to administer one gram during anesthesia and the same dose, three hours after this.

If during the operation there was a threat of developing any infection( especially the operations on the rectum and large intestine), Imipenem + Cilastatin recommends that the administration instruction be administered five hundred milligrams eight and sixteen hours after anesthesia.

In order to prepare a working solution, it is necessary to add a hundred milliliters of a specialized solvent into the vial of the substance powder, which includes a five percent or ten percent aqueous dextrose solution, 0.9% sodium chloride solution. In such a solution, the concentration of the antibiotic imipenem should not be more than five milligrams per milliliter.

Do not use this medication at the same time as other antibacterial drugs, as well as with lactic acid salt.

The substance is not compatible with other beta-lactam antibiotics( these include cephalosporin, monobactam and penicillin).Their simultaneous application can lead to the emergence of cross-allergic reactions.

Interaction with ganciclovir sometimes provokes the development of generalized seizures.

It is forbidden to use the drug in question during the period of gestation, as well as during breastfeeding.

This medication should not be used to fight meningitis.

Urine during therapy can be slightly colored in a reddish hue.

Dosage forms of the drug( for intravenous administration and for intramuscular administration) should be used strictly for the intended purpose. They are not interchangeable. Before starting treatment with the medicament in question, it is important to conduct a thorough investigation for allergic reactions or increased individual sensitivity to beta-lactam antibiotics.

If the patient already had other diseases of the gastrointestinal tract, for example, colitis, then using the drug in question, there is a possibility of developing pseudomembranous enterocolitis.

In order to successfully avoid the occurrence of any unpleasant reactions from the central nervous system in those patients who have had any brain trauma or had convulsions, it is recommended to carry out accompanying therapy with high-quality antiepileptic medications.

It should be noted that elderly patients are likely to have age-related renal dysfunction, which may require a dose reduction.

It is important to remember that elderly patients should use the drug with caution. As a rule, they exhibit symptoms of various age-related disorders in the functioning of the kidneys. In this case, if you need to use the drug "Imipenem + Cilastatin", the instruction manual recommends that you consult with your doctor to reduce the dose used.

There are some special conditions for the use of the medicament for children. If their body weight exceeds forty kilograms, the same recommendations as for adult patients can be applied to them. If the child is older than three months, and his weight is less than forty kilograms, then the maximum daily dose of such a patient will be two grams. They should be administered fifteen milligrams per kilogram four times a day.

In no case should you use the medicine "Imipenem + Cilastatin" for children who have not yet reached the age of three months, as well as those children who have disrupted the normal functioning of the kidneys, which can be expressed in the level of serum creatinine concentration above two milligrams per deciliter. 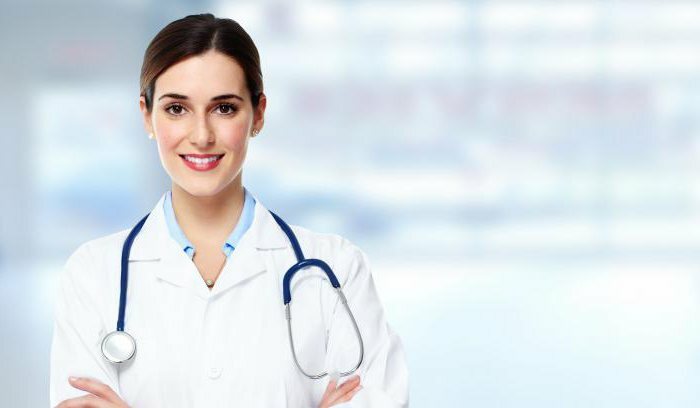 There are some nuances that must be considered when using Imenepem + Cilastatin. The instruction recommends that you carefully study the contraindications to this drug. Among them are the following:

It is important to take into account that elderly patients, as well as those who suffer or have ever suffered from diseases of the central nervous system or diseases of the gastrointestinal tract, should be taken with caution under the constant supervision of the attending physician. It is he who can competently appoint the correct dosage of the drug "Imipenem + Cilastatin."It is important to study the contraindications before starting treatment. 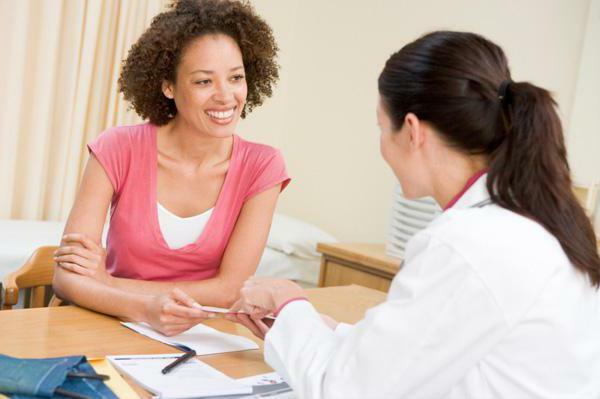 There is no exact information on how to cope with an overdose of the drug in question. However, it is known that these active compounds successfully undergo hemodialysis. Nevertheless, it is still unknown how effective this procedure is in case of an overdose. Therefore, it is important to follow all the recommendations that contain the description of this drug for the use of the "Imipenem + Cilastatin" agent.

In order for the drug to be effective, it is important to take into account another important point. Namely, how to store the drug "Imipenem + Cilastatin."The description of the substance contains the following tips.

There are a number of drugs that are part of the group of analogues of the drug "Imipenem + Cilastatin."Substitutes for the drug in question are Inemplus, Mixaxil, Lastinem, Synerpen, Tiaktam, Piminam, Supranem and Tihenam. As a rule, all these preparations have the same active substance as the drug in question. The main active substances of these drugs are imipenem, cilastatin( the trade name of which reflects the above medications).Thus, for these medications, on the whole, there are also contraindications, and side effects, and pharmacological action. However, remember that the dosage should appoint a doctor who can take into account all the necessary nuances. The preparation "Imipenem + Cilastatin", analogues of the medicine should not be used by patients arbitrarily, without the appointment of the attending physician and his constant control. Including his consultation is necessary and when selecting the appropriate analog. 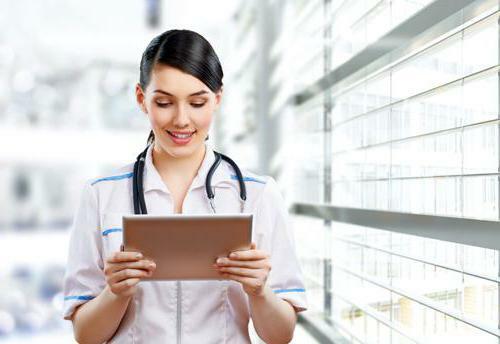 Practice confirms the effectiveness of the preparation "Imipenem + Cilastatin".The reviews report successful treatment results. However, both doctors and patients emphasize that it is important to follow exactly the recommendations that are contained in the instructions and which are provided by the attending physician. Only this method of therapy can benefit the patient's body.

Do not ignore contraindications, the presence of which does not allow you to start treatment with the drug. Otherwise, its use can not only not give a positive result, but also cause serious damage to the physical condition of the patient. Also, improper use of the drug in question can lead to side effects, some of which can significantly exacerbate the patient's condition. It is important that the treatment is conducted under the guidance of a competent doctor who is not only well acquainted with the features of the use of this drug, but also possesses the necessary skills and knowledge to cope with unexpectedly arising difficult situations. Your health should be in the hands of real experts.

Before deciding to start treatment with the drug, it is important to carefully read all the information about it, which reflects the characteristics of its effects on the body. It is necessary to know all about potentially possible adverse reactions, the occurrence of which can cause a lot of inconvenience to the patient and the difficulties of his treating doctor.

It is important to treat the choice of treatment method as responsibly as possible. Choose the best quality drugs!