In the eye birthmark: photo, removal

Get the perfect skin without a single speck can, perhaps, only through Photoshop. All sorts of birthmarks, freckles, uneven pigmentation, birthmarks - all this forms a real living image of a person, and it would be ridiculous to consider them an unequivocal drawback. But sometimes they cause anxiety, especially if they have an unusual shape, color, start to grow or are located in an uncomfortable place. In the eye, a mole may appear exactly as on a cheek or abdomen, and this causes legitimate anxiety. Is it safe and worth it to fear the consequences? 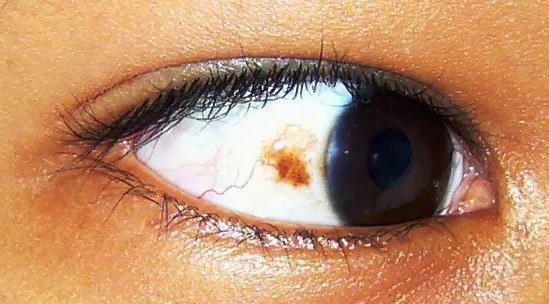 Kinds and location of moles on the eye

In vernacular mole is called not only the nevus, but also the papilloma, although these are completely different things. They differ not only in appearance, but also in origin, although both are related to neoplasms. A dense and resilient speck of dark color, most likely, an ordinary nevus, but the papilloma has a loose structure and looks like a randomly appeared soft process of skin.

If there is a mole in the eye, then this is the nevus, and they differ only in location. If a brown spot is visible on the iris or on the white of the eye, this is most likely a nevus of the conjunctiva. If the neoplasm is deep and can not be detected with the naked eye, then this is a nevi of the choroid - it is found during ophthalmologic examination.

On the eyelids there may be nevuses and papillomas, the latter often develop with age, hang, interfere with the survey, and in a particularly unfortunate situation, they can provoke a constant tearing. 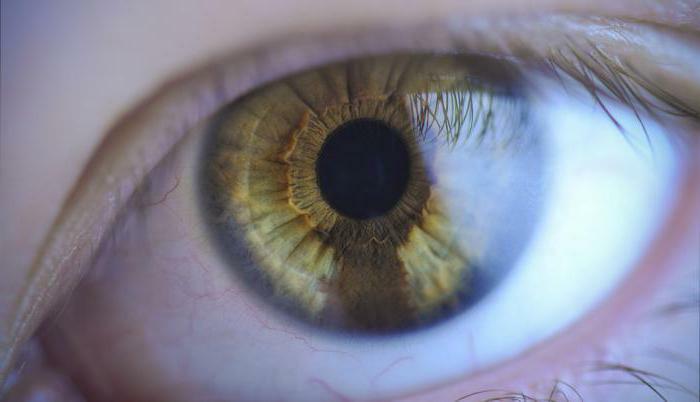 An eye in the eye birthmark can be located on the iris or on the eye protein. The nevus on the iris looks like a site with a different color, it can look even original. As the pupil, as a rule, is not blocked, this neoplasm does not interfere with vision.

The nevus of the conjunctiva can be pinkish or with a red tint, any shade of brown, sometimes even gray or almost black. In the absence of melatonin, the nevus will be almost invisible and will be detected only during a special examination or if it suddenly changes color due to a change in the hormonal background or other causes.

If a nevus appears in the depth, practically on the fundus or in the region of the so-called equator of the eye, then it can be detected only by examination. If the mole in the eye does not affect the quality of vision and does not start to increase suddenly, then you can not worry.

Opinions of scientists about the scarcity of the nevus of the choroida diverge. This neoplasm is found in about 3% of cases, but some experts believe that a nevus in the eyeball is present in almost 20% of people, simply the overwhelming majority lack pigmentation, and it is harder to detect. 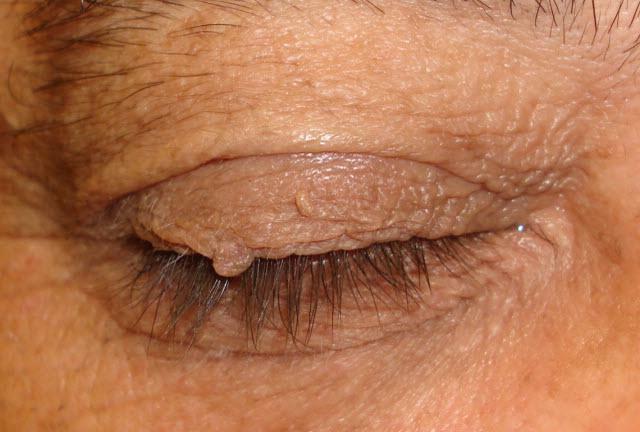 Birthmark on the upper eyelid

Depending on the type and location of the neoplasm in the upper eyelid, it can be a piquant feature of the image or an annoying cosmetic defect. A small nevus on the border of the eyelashes is successfully concealed by women in cosmetics, but the soft papilloma can actually spoil the appearance and even interfere with sight.

To remove a birthmark on the eye, you need to contact the specialists and, depending on its type and location, select the method of removal. Despite the fact that the eyelids - in general a very delicate area that requires careful treatment, this is a simple procedure that is carried out under local anesthesia and does not require any complicated actions. You can choose surgical removal, electrocoagulation, laser surgery. 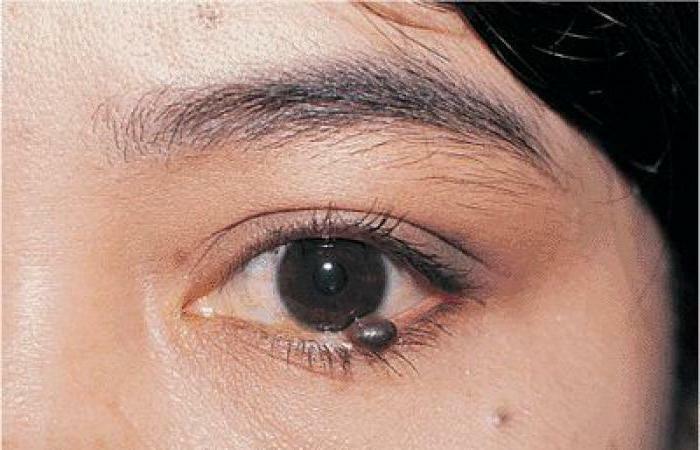 Birthmark on the lower eyelid

From the doctor's point of view, the location of the birthmark is of no decisive importance. Perhaps, if the nevus is located near the tear ducts, this may cause some fears, and it is better to remove such a birthmark before it undergoes changes in size due to external causes.

Other neoplasms, papillomas or condylomas, can cause discomfort, and eventually increase in size. Removal of a mole under the eye is carried out taking into account the smallest traumatization of tissues. If biopsy of the neoplasm is required, surgical excision of the tissues is preferable. Methods of removal are used the same as in the upper eyelid, especially if in addition to a cosmetic defect the neoplasm prevents blinking, prolongs the eyelid, provokes increased tears, or, on the contrary, hampers it.

Hanging moles on the eye

The most disturbing cause dangling neoplasms, in most cases it is papillomas. Over time, they begin to grow, acquire dark pigmentation and coarsen. Usually they are called "senile warts", the medical name - age keratoma. They appear under the influence of the human papillomavirus and gradually progress.

Age-related keratomas can appear anywhere on the skin, and eyelids are no exception. With the development of the disease, such a "hanging mole" can become cornificate, become covered with scales, and increase considerably in size. After removal of the keratoma or papilloma, a study of the removed tissue and complex treatment for the papilloma virus are required. In most cases, this is a benign form of a so-called precancer that does not pose a danger to the body, but it is better to be safe.

Increased age of keratomas over time and the appearance of new ones is a completely normal process in an organism infected with human papillomavirus. It is not necessary to panic, there are at the pre-retirement age, several suddenly appeared neoplasms, including on eyelids or in close proximity to the eyes. Modern methods of cosmetic surgery allow you to get rid of nevi, papillomas and age-related keratas quickly and painlessly.

Wherever a birthmark is located, it is necessary to observe it, fixing the dimensions. Nevus choroidi are observed once a year on special ophthalmologic equipment, fix the size of the lesion, and if there is a change in borders, shape and size, designate removal.

The degeneration of nevi into a dangerous melanoma is much less common than feared. Of course, do not expose yourself to additional risk - injuries and excessive insolation can spur processes that contribute to pathological changes in the lesion. However, in most cases, the nevus is an innocuous and even nice feature, even if it is a mole in the eye. Photos of such nevi are often demonstrated as an original version of heterochromia. 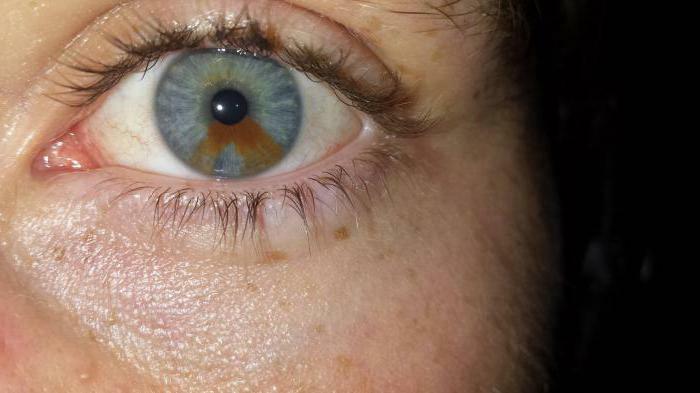 If the birthmark is hampered by

Practitioners are often referred to as uncomfortable locations to remove a stable, non-increasing mole. Nevuses or papillomas can be located in potentially traumatic places, and if the birthmark is constantly rubbing against clothes or shoes, it is better not to expose it to additional risk. In a situation, if someone has a mole on his eye, removal becomes the preferred option.

Even if such a mole does not hang and does not delay the eyelid, it still is exposed to excessive sunlight. Nevus on the eyelids of women are constantly in contact with cosmetics, in addition, they are easily traumatized, only by unsuccessfully rubbing their eyes. If the nevus is not located on the eyelids, but directly in the eyeball, then first of all the quality of vision is taken into account. Ophthalmologists claim that the deterioration of visual acuity due to nevus occurs much less frequently than for any other reasons. 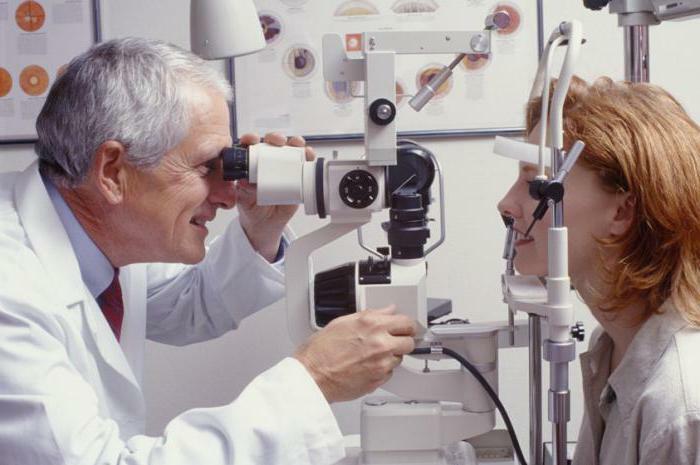 Despite the ineradicable love of folk medicine, doctors categorically insist on medical methods of removing any neoplasms. You can not use a "magic" thread with conspiracy reading, especially if it's a hanging mole under the eye or in the upper eyelid. In no case do not fall for the seeming simplicity and cheapness of strange methods such as burning out moles with alcohol tinctures of all kinds of plants.

First, the eyelids are very thin skin, which is easy to harm. Secondly, it is too easy to get a burning solution into the eye, the consequences of which can be extremely serious. Finally, do not forget that it is external negative effects that can force an innocuous nevus to become a dangerous and active form of an oncological disease.

When a suspicious speck on the iris or on the eye of the eye appears, it is necessary to make an appointment with an ophthalmologist and clarify the diagnosis. If the neoplasm reduces the quality of vision, a visit to the doctor becomes urgent. Moles on the eyelids are best entrusted to an experienced surgeon in a modern medical center, and soon you do not even think of a nevus or papilloma.