Adenocarcinoma of the prostate: description, causes, stages, symptoms and treatment

Adenocarcinoma of the prostate gland is a serious oncological disease. Previously it was considered one of the main causes of death among older men. Today, this ailment is increasingly diagnosed at a young age. Is it possible to prevent the development of cancer? How to recognize its manifestations in the early stages?

Prostate adenocarcinoma is a malignant epithelial neoplasm that belongs to oncological diseases. Worldwide, this diagnosis is confirmed every year by 500,000 new patients. Despite the constant improvement of diagnostic and therapeutic techniques, mortality from adenocarcinoma is still high. Why? Patients often ignore the initial symptoms of the problem and do not rush to get help from a doctor. 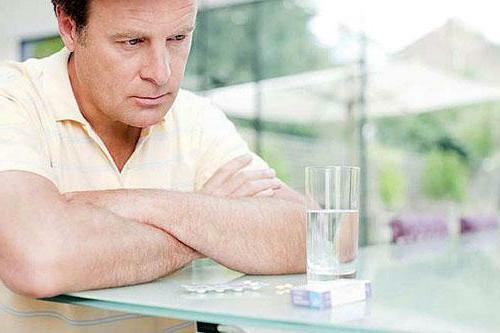 The main causes of the disease

Adenocarcinoma develops by germination of the tumor into the prostate or migration through the lymphatic ducts. There is a direct cause of this disease - uncontrolled reproduction of atypical cells. They gradually penetrate into healthy tissues. Atypical elements are formed as a result of genetic mutations. Why this happens, modern medicine can not exactly answer. However, doctors identify a whole group of factors that increase the likelihood of developing a disease:

Some other factors common to all forms of oncological diseases also have a certain influence. This radiation, poor ecology, work in harmful production and so on. 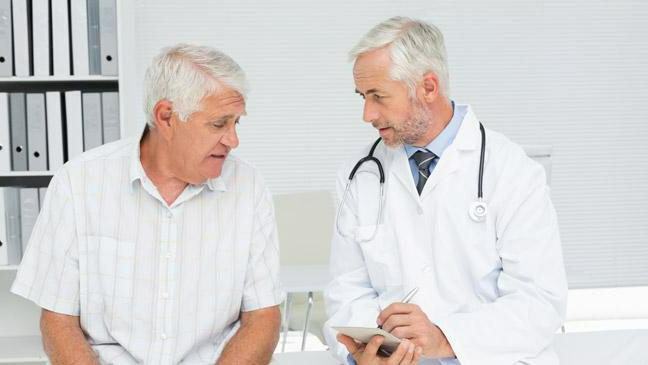 How to recognize adenocarcinoma?

Manifestations of this disease can not be called characteristic. Usually men have symptoms similar to the clinical picture of genitourinary infections. If the tumor is small, for a long time it does not make itself felt. As the neoplasm develops, the patient's condition deteriorates sharply. Here are some manifestations of adenocarcinoma of the prostate:

The initial symptoms of the disease are similar to those observed with prostate adenoma. Therefore, even at the stage of diagnostics, it is important to differentiate one pathology from another. After the appearance of metastases( the 4th stage of the disease), the pain discomfort is aggravated, the swelling of the lower extremities appears. Sometimes paralysis develops on the background of compression of the spine with a tumor. 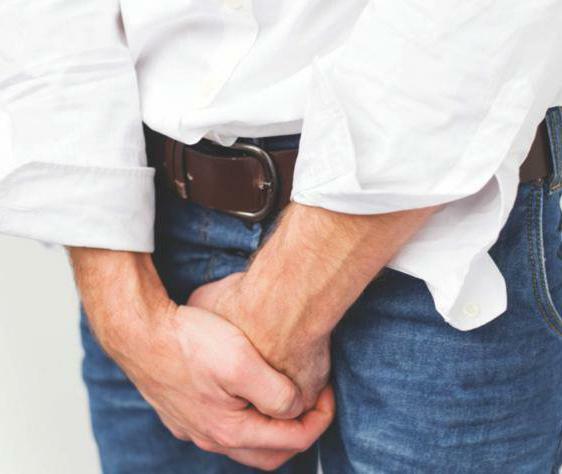 Types of adenocarcinoma of the prostate

One of the determining factors in the treatment of factors is the differentiation of adenocarcinoma. This term refers to the degree of maturity of the tumor, the difference between healthy cells and pathological ones. It is used to classify the disease. In this case, distinguish between low-, medium- and highly differentiated neoplasms. The incidence of cases is characterized by the following types of adenocarcenoma, such as:

Fine-adenocarcinoma of the prostate gland is the most common variant of the disease. Its source is the epithelium of the acini of the prostate. Neoplasms usually develop simultaneously in several places, and then merge together. For the treatment used: surgical intervention, hormonal blockade of testosterone and radiotherapy.

The second most common type of adenocarcinoma is highly differentiated. As a rule, the tumor develops slowly and does not give metastases. Its elements do not differ in structure from normal cells. With timely detection, the prognosis for treatment is favorable.

The most rare and aggressive form of adenocarcinoma is squamous cell. It is characterized by rapid metastasis in the bone. Hormonal therapy and chemotherapy with this form of the disease are often ineffective. Patients are recommended to carry out radical prostatectomy.

The low-grade adenocarcinoma of the prostate gland has an average degree of severity. The tumor is characterized by a layered structure, and according to the Gleason scale it corresponds to 8-10 points. Neoplasm quickly sprouts into neighboring organs. 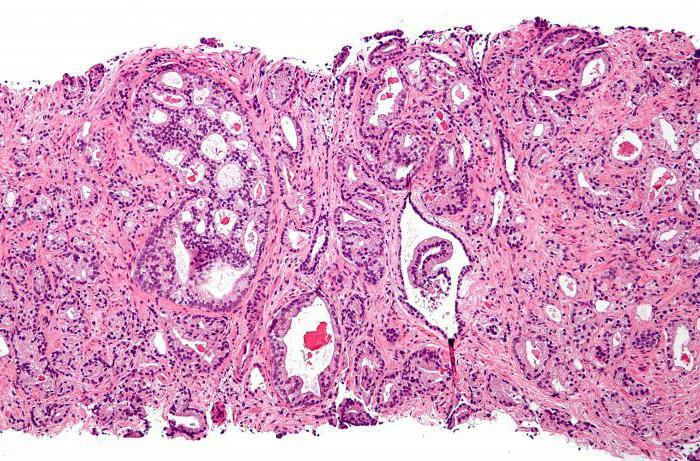 In European clinics, all men after 45 years undergo mandatory examination to identify prostate diseases. It includes a urologist consultation and a blood test for a specific antigen. The latter is considered the most informative test for the early diagnosis of oncology. A high level of prostate-specific antigen in the blood indirectly indicates the presence of a pathological process.

Another indicative test method is the rectal test. It allows you to assess the state of the body and the degree of its functionality. Adenocarcinoma of the prostate gland has a positive prognosis only at the initial stages of development. In other cases, expensive and long-term treatment is required.

If suspected of this ailment, they are additionally assigned:

In many modern clinics, a special rectal sensor is used to assess the condition of the prostate. It allows using a quick-firing needle to take a material for examination. This device is inserted into the rectum, and the results of the procedure are displayed on the monitor screen. 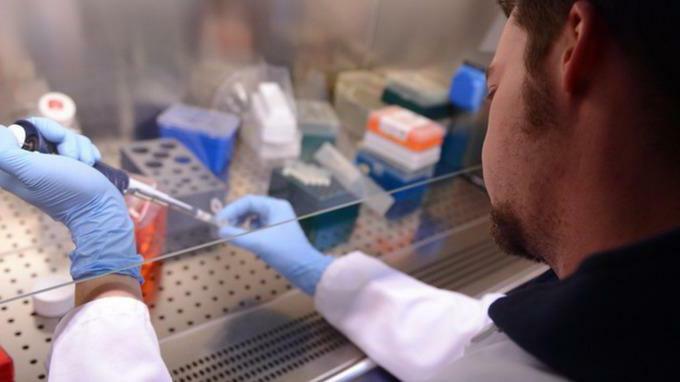 Stages of development of the disease

Before starting treatment it is necessary to determine what type of acinar adenocarcinoma of the prostate( what it is, described just above), as well as the degree of pathological process. The development of this disease occurs at the same stages as prostate cancer of other forms. The only difference is the prognosis for a complete cure. For example, squamous cell forms of all stages of growth pass swiftly. Quite a high rate of development is characterized by moderately differentiated adenocarcinoma of the prostate gland. However, finding them at the initial stage of development is considered a real miracle. If you start treatment in time, you can hope for a favorable outcome.

What stages of adenocarcinoma of the prostate gland secrete? There are four in total:

It is possible to defeat adenocarcinoma only at the initial stage of the disease. With adequate and full-fledged therapy, it is possible to stop the symptoms and slow the progression of the pathological process at any stage. The choice of a specific treatment strategy depends on the degree of spread of the tumor. Some variants of the location of the neoplasm allow performing an operation to excise the gland and regional nodes. Today, doctors are trying to use minimally invasive techniques that do not require a long rehabilitation period. Localized adenocarcinoma of the prostate often requires wait-and-see tactics and constant observation. The prognosis of survival does not always increase against the background of active therapy. 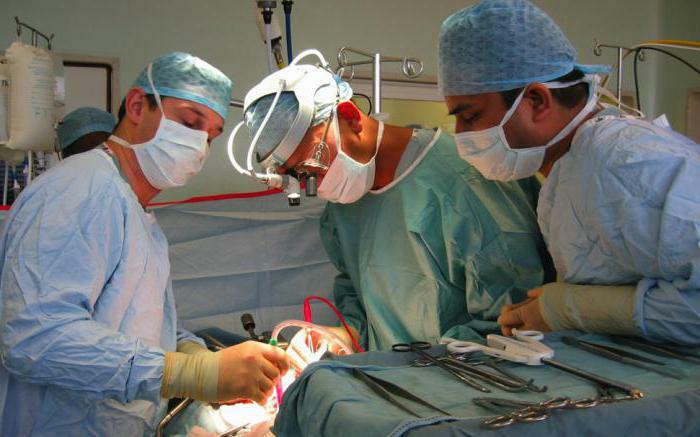 Conservative and surgical treatment of adenocarcinoma

If the tumor is available for removal, the patient is prescribed a prostatectomy surgery. Currently, it is carried out with a laparoscope or robotic assistant. After prostatectomy, a long rehabilitation period is required. It includes measures to restore the functions of the pelvic organs, male potency( if it is still relevant).

In later stages, treatment is supplemented with hormonal medications and radiation therapy. The latter has several options. The irradiation source can be located outside or inside( introduction of a capsule with radioactive isotopes of iodine).When the prostatectomy is contraindicated, it is replaced by cryotherapy. During this procedure, the tumor is frozen, resulting in malignant cells being destroyed.

Acinar adenocarcinoma of the prostate 7 points or higher in elderly patients is usually not subject to surgery. In this case, dynamic observation and palliative measures are assigned. 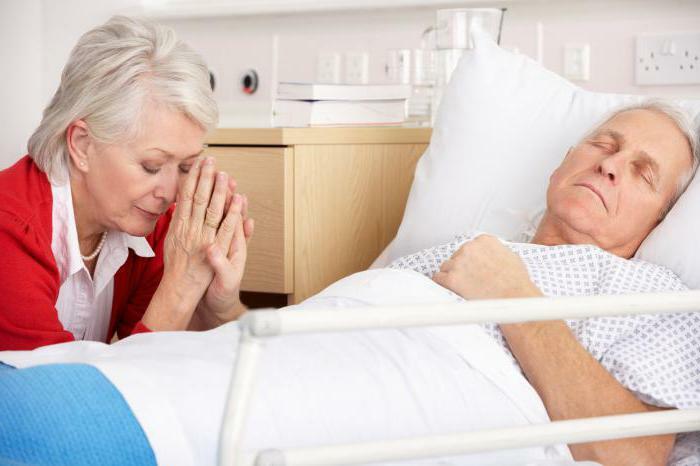 What outcome is possible with the diagnosis of prostate adenocarcinoma? The prognosis for this disease largely depends on the stage of development of the pathological process, the age of the patient and his general condition. In the early stages, it is estimated as conditional-favorable. Unfortunately, adenocarcinoma at the initial stages of development does not show a vivid clinical picture. Therefore, patients do not rush to get help from a doctor. Most of them notice the problem at the 3rd-4th stage, when metastases already appear. In this case, the disease is irreversible.

Oncological diseases in the modern world are increasingly causing early death. In the stronger sex, adenocarcinoma of the prostate gland was most widely spread. Treatment of this pathology is long and very difficult. Diagnosis of the disease in later stages usually ends with an immediate lethal outcome. To prevent the development of such an insidious disease, you must adhere to a healthy lifestyle and regularly undergo preventive examinations. Be healthy!