Knee joint: ligaments and injuries associated with them. How to treat ligaments of the knee joint

Speaking of the knee, most people mean the knee joint. Indeed, it is an important anatomical part, however, its functionality without muscles and tendons is impossible. When walking, running, playing sports in this area, there is a significant load, increasing the risk of damage. Let us consider in more detail the knee joint, ligaments, the muscular apparatus and the problems that arise during the action of the traumatic factor.

Three bones are involved in the formation of the joint: part of the femur, patella and part of the tibia. The patella is represented by femoral-tibial and femur-patellar articulations. Anatomical features contribute to the simultaneous mutual movement of bones in several planes.

Menisci, represented by connective tissue cartilage, are "pads" between the bones. Their function is to provide depreciation, distribution of pressure and load when driving. On both sides of the meniscus are associated with the capsule of the joint with the help of coronary ligaments. 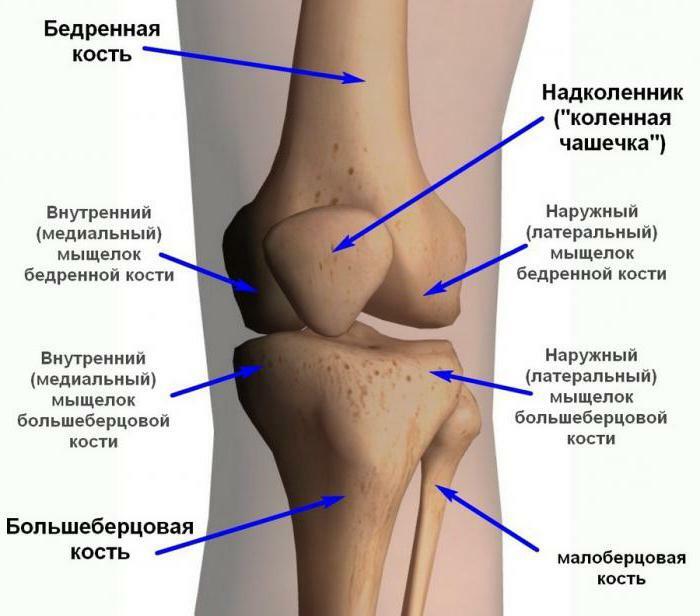 The joint stabilizers are the following muscle groups, whose awareness is considered to be an important moment in the trauma:

Bending the joint allows the human foot to step forward without hitting the limb on the ground, and gently placing it. Otherwise, the human leg would be carried in the upper forward direction by raising the hip.

The knee joint, the ligaments of which are represented by five main groups, is considered to be a complex part of the body according to the anatomical design. Its composition includes the following types of ligaments:

In case of traumatization, especially sports injuries, the main load occurs on the cruciate ligaments of the knee joint. The terms of rehabilitation and rehabilitation period depend on the nature of the trauma and the damaging factor, the characteristics of the victim's body, lasting from 4 to 6 months.

Cross-shaped ligaments and their functionality

The anterior ligament extends from the posterior upper part of the feminis meniscus through the cavity of the knee joint, attaching to the tibia, which enters the articular conglomerate. Its function is to stabilize the knee joint, limiting the movement of the tibia forward.

The posterior ligament extends from the anterior part of the femur bone and, crossing the joint cavity, is attached to the tibia in the posterior part. The ligament does not allow the shins to shift excessively. 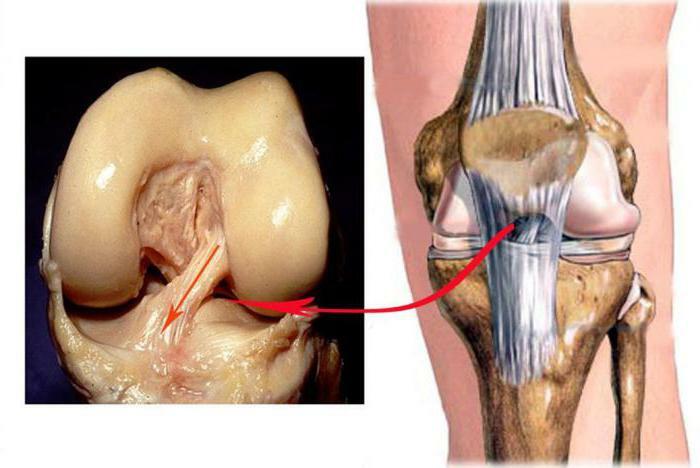 Such damage is considered to be the most complex and dangerous, requiring full treatment. Incorrectly selected or untimely initiated therapy leads to the development of lameness and persistent restriction of functioning. Most often, such injuries are found in professional athletes when skiing, skating, jumping, wrestling, arising from a strong impact or unsuccessful turn, fall.

Severe piercing pain and characteristic click, severe restriction of mobility may indicate that the ligament of the knee joint is torn. The victim can not move independently, only relying on someone.

Trauma of the posterior ligament occurs when the knee is overextended or during an impact on the anterior surface of the tibia. Damage to the anterior cruciate ligament of the knee joint is most common. Symptoms of this injury are included in the "Turner triad" along with a break in the meniscus and the outer ligament.

The knee joint, whose ligaments have a partial tear, becomes hyperemic, edematous, painful to touch and when trying to move. The joint cavity accumulates blood( hemarthrosis).Do not confuse the inflammation of the ligaments of the knee joint, which has a similar clinic, with the symptoms of trauma that occurred a few days ago.

A complete rupture of the cruciate ligaments causes excessive mobility of the tibia in the anteroposterior plane. This symptom is checked by two specialists at a time. The first holds the back of the thigh and flexes the anesthetized limb in the knee at a right angle. The second doctor checks the tibial movement forward and backward. When stretching or tearing, such a sign will be negative. 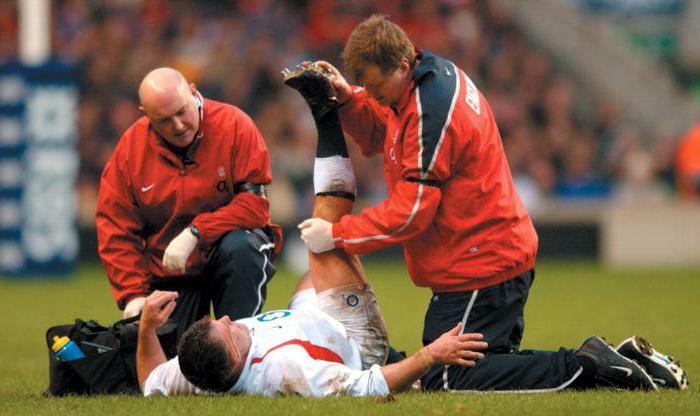 Tension of the ligaments implies a slight tearing of the fibers, accompanied by moderate soreness, minor edema, no hemorrhage. The limitation of the motor function occurs to a small extent.

The definition of the mechanism of trauma makes it possible to determine possible damages of anatomical structures. Before examining the injured knee, the doctor examines a healthy one in order to find out the features of the structure. The state of internal structures is assessed using ultrasound and MRI.

Differential diagnostics allows to exclude fractures of bones, patella, rupture of the meniscus. When dislocated, the bones are displaced relative to each other, there is no possibility of motor function, there is a springing resistance when trying to passively move. To damage the ligaments is not characterized by a complete lack of movement, it is limited because of the pain syndrome. Also there is no spring resistance.

Fracture is accompanied by deformation, the appearance of crepitation and pathological mobility. However, there are fractures that do not have similar signs. In this case, confirmation of the diagnosis requires an x-ray examination, ultrasound or MRI. 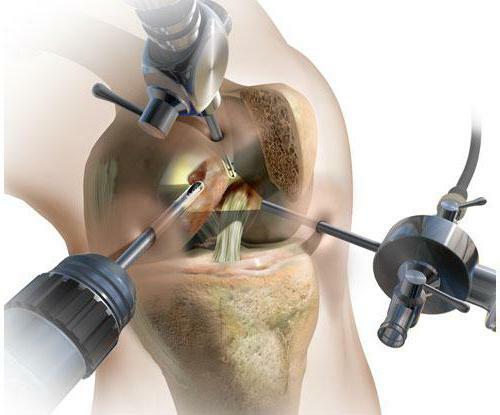 For partial injuries( stretching, tearing), help is provided at the emergency room. The limb should be in an elevated position, the first few days - bed rest. The first day after the injury requires the application of cold on the damaged area. The joint is fixed with the help of a tight elastic bandage, which allows to keep the physiological position of the limb while moving. Leave the bandage for the night, so that there is no violation of blood circulation. Pain relief requires the use of analgesics( "Ketanov", "Ketalong", "Nalbufin").

The knee joint, which ligaments require not only conservative therapy, but also surgical treatment, requires a long rehabilitation period. After all the same measures as with partial injuries, physiotherapeutic measures are used, including massage, physiotherapy exercises, electrophoresis with medications.

The ideal candidate for the competition is a young athlete who needs to perform jerky limbs in his sport. Older people who do not have a lot of physical activity are more suitable for conservative therapy and the use of therapeutic physical education. 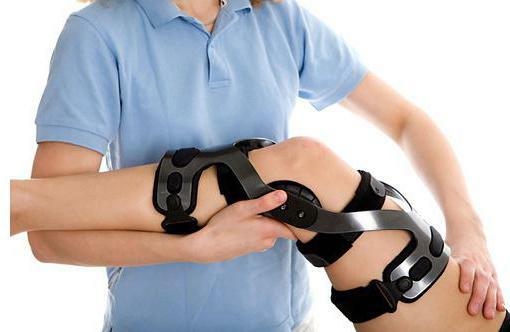 The plasty of the cruciate ligament of the knee requires the use of a graft taken from a patellar ligament or a hamstring( autograft).It is also possible to use synthetic prostheses, however, their use can be rejected by the patient's body.

Stitching synthetic transplants is a common procedure when the lateral ligament of the knee joint is broken. Treatment with the help of operational measures is considered a method of choice in this case.

Surgical practice has shown that simple stitching of injured structures practically does not provide restoration of functionality.

What are the possible complications of a knee injury?

Among the common complications of knee injuries are the following:

After getting the injury, most victims are interested in: "Rupture of ligaments of the knee joint how many heals?"Such a question is considered in each clinical case individually. Depending on the nature of the trauma and the characteristics of the body, full capacity for work can return in six months, and maybe in a few months. 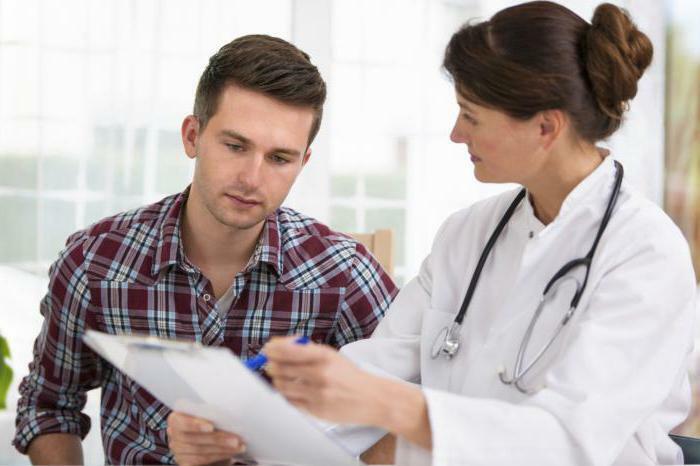 The mechanism of damage is important, and how the victim got a rupture of ligaments of the knee joint. How much the trauma heals depends also on the exact observance of the advice of the treating specialist. Early initiation of therapy, taking necessary medications and adherence to the regimen allows to speed up the process of recovery and prevent the development of complications.

The list of preventive measures used to minimize joint damage is as follows:

Injury of the knee joint can be prevented, which refers to simpler measures than the restoration of its functionality due to damage.