For supportive treatment of the second type of diabetes mellitus, in which insulin molecules are produced, glycazide-based drugs are used. This substance is a sulfonylurea derivative, belonging to the second generation.

The drug "Gliadab MB 30" is considered to be the Russian analogue of the French drug "Diabeton MV".It is produced by the chemical and pharmaceutical combine "Akrihin" in the Moscow region. 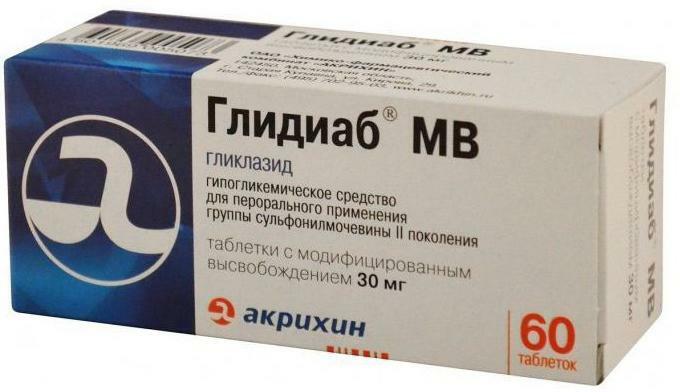 Medication refers to oral hypoglycemic agents in tablet form having a modified release. The color of their structure is white or cream, there may be marbled impregnations. Tablets resemble flat cylinders that have a facet.

Consumer pack is a bundle. It can contain 30 or 60 tablets, packaged on blister plates.

In contrast to the drug Diabetes MW with a dose of 0.060 g of gliclazide, the amount of identical active ingredient in Glidiab MB is two times lower, which is 0.030 g. 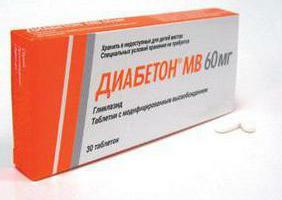 There is also a drug "Glydiab" with the usual release of the active substance. The dosage in one tablet is 0.08 g of gliclazide.

works The instructions for use for the drug Gliadiab MB describe the action of Gliclazide, which stimulates the secretion of insulin in β cells located in the pancreas.

Under the influence of tablets, the insulin secretory activity of glucose molecules increases, and peripheral tissues become more sensitive to insulin hormone.

Muscle glycogen synthetase, being an intracellular enzyme, is more effective. There is a decrease in the interval from the beginning of eating before the release of the hormone. Insulin secretion is restored at an early peak, which distinguishes gliclazide from the remaining sulfonylurea precursors, which occur in the second stage. The postprandial glucose level decreases.

Microcirculation improves due to pooling and adherence of platelet cells, normalization of vascular wall permeability, reduction of development of microthrombotic and atherosclerotic processes, restoration of reactions of natural dissolution of blood clots. The possibility of reacting receptor formations in vessels to adrenaline molecules decreases.

The drug is able to slow the diabetic nature of retinopathy on a non-proliferative stage. Long-term treatment with this drug in conditions of diabetic damage to the components of the renal parts responsible for the filtration, can significantly reduce the excretion of proteins in the urine.

The medication does not increase the body mass, but on the contrary, it decreases due to the effect on the early stage of insulin secretion. It does not provoke increased insulinemia.

Doctors recommend using the drug with high sugar in the blood of the second degree. Treatment is carried out with insufficient effect from diet and moderate physical exertion.

For the drug "Gliadab MB", indications are associated with preventing deterioration in diabetic disorders, characterized by nephropathy, retinopathy, myocardial infarction and stroke.

The dosage of the drug is selected for each patient separately, taking into account the manifestations of the disease, the glucose concentration with an empty stomach and 120 minutes after eating.

For the medicine "Glidiab MB" the instruction for use appoints a daily initial dose of 0.03 g, which is equivalent to one tablet. This concentration is indicated by elderly patients after 65 years of age. The medication is taken orally on a single pill every morning, when breakfast is served.

If necessary, the dosage is increased every two weeks. Maximum for one day is allowed to take about 0.120 g, which corresponds to 4 tablets.

Medication "Glidiab MB" is used instead of the same drug with the usual release, consuming 1-4 tablets per day. 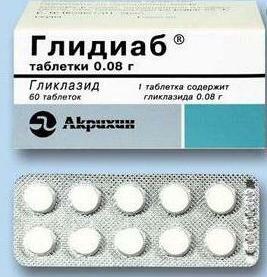 It is combined with a hypoglycemic agent based on biguanide, an inhibitor of alpha-glucosidase insulin molecules.

In cases of violations of renal function of a mild or moderate nature, when the rate of creatinine removal is not more than 0.080 l per minute, dosing is not reduced.

When you can not take

Glidiab MB tablets do not recommend using the first form of diabetes mellitus, with ketones in the urine, with gastric paresis, hyperosmolar, diabetic coma and precoma, with large surgical operations and burn injuries, traumaticprocesses when you need insulin treatment.

Do not use the drug for fever, leukopenia, pregnancy, breastfeeding and excessive intolerance to the ingredients of the medication.

Care is required when administering medication, special care and dosage adjustment for patients with alcohol dependence and dysfunction in the thyroid gland.

The Glidiab MB treatment medication indicates the need to combine it with a low-calorie diet, which includes a small carbohydrate content. It is required to regularly monitor the concentration of glucose in the bloodstream from the morning before and after eating.

If there have been surgical interventions or decompensation of the diabetic state, it is possible to administer insulin.

There are warnings about the occurrence of hypoglycemic process with the use of ethyl alcohol, non-steroidal anti-inflammatory substance and lack of nutrition. Drinking alcohol can cause disulfiramoid-like syndrome, while the head and stomach ache, nausea and vomiting are possible.

The dosage of the drug should be adjusted during physical or emotional stress and when the meal is not eaten in time.
Particularly sensitive to the effect of the remedy are the elderly, patients with unbalanced or poor nutrition, weakened patients who suffer from insufficiency of the adrenal-pituitary system.

At the initial stages of drug administration when choosing a dosage, if there is a predisposition to a hypoglycemic crisis, it is not necessary to perform actions for which increased attention and a rapid psychomotor reaction are necessary.

The Gliadiab MV tool includes information on abnormalities in the endocrine organs during a malfunction in the regimen of tablets and in case of malnutrition. Usually a decrease in the level of glucose in the bloodstream causes the occurrence of pain in the head, tired, hungry, helpless, anxious, instant weakness, aggression, weak concentration, depressive state. Also there are changes in visual perception, tremor, sensory and convulsive disorder, dizziness, hypersomnia, shallow breathing, decreased heart rate.

Digestive organs cause malfunction in the form of malabsorption, nausea, diarrhea, anorexic lack of appetite, a disorder in the functioning of liver cells, cholestatic jaundice, an increase in the effectiveness of transaminase enzymes.

Undesirable processes in the hematopoietic system are associated with a decrease in hemoglobin, the number of platelets and leukocyte cells.

The drug can cause allergic manifestations in the form of itching, hives, maculopapular rashes.

The instructions for use with Glidiab MB are cautions against overdose, which is expressed by a decrease in the glucose concentration in the blood plasma. With a strong excess of the drug, it is possible to develop a hypoglycemic coma. 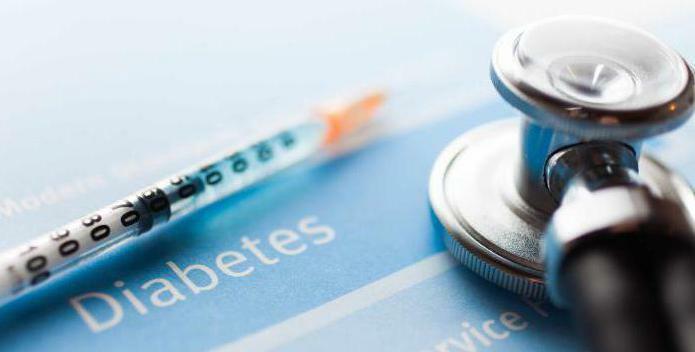 To eliminate it, people are allowed to eat a little well-sucked hydrocarbons, for example, a piece of sugar. When a person is unconscious, he is injected into a vein with a 40% dextrose or glucose solution, and 1 mg of glucagon is injected into the muscle. If the patient wakes up, then he is forced to eat well-absorbed hydrocarbons to avoid a repetition of a hypoglycemic attack.

The hypoglycemic activity of the drug "Glydiab MB 30 mg" can be strengthened by the parallel introduction of an inhibitor of the angiotensin-converting and monoamine oxidase type, a blocker of beta-adrenoreactive and H2-histamine-dependent receptors on the basis of cimetidine, antifungal miconazole and fluconazole preparations, nonsteroidal anti-inflammatory substances phenylbutazone, indomethacin, diclofenac.

The effect of tablets is increased with the help of clofibrates and bezafibrates, antituberculosis drugs from the group of ethionamide, salicylates, indirect anticoagulant compounds of the coumarin structure, anabolic steroids, cyclophosphamide, chloramphenicol, sulfonamides with prolonged influence.

The molecules of ethyl alcohol are able to affect the glycazide with the emergence of a disulfiram-like process.

The active component of tablets causes untimely depolarization and contraction of the ventricles of the myocardium muscle when combined with cardiac glycosides.

Instruction for use is important not only for the "Glidiab MB" attached to the medication. Reviews tell us about what patients think about the effectiveness of the drug. This tool helps many patients to reduce the concentration of glucose to normal values, and in combination with the diet changes the way the patient lives.

People note that a positive feature of tablets is their convenient use in the morning. During the day you can not remember the need for treatment.

The drug "Glidiab MB" reviews can be heard and the negative nature associated with the inefficiency of this tool. Usually this happens with improper dosing, when a small amount of medicine is prescribed.