The preparation "Milgamma": indications for use

The preparation "Milgamma"( injections), the application of which is carried out strictly according to the doctor's prescription, includes a complex of B vitamins in its composition. The components contribute to the elimination of degenerative and inflammatory pathologies of the motor and nervous systems. 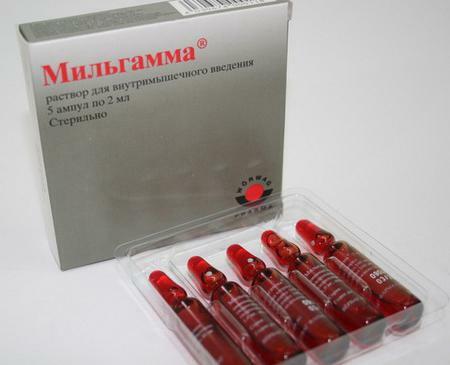 Vitamin B1 is considered a key component in carbohydrate metabolism. The compound participates in the Krebs cycle and the synthesis of thiamin pyrophosphate and ATP.Pyridoxine( B6) is an element of protein metabolism. Partly the component participates in the metabolism of fats and carbohydrates. The physiological function of these compounds is to mutually potentiate the activity. As a result, there is a positive effect on the cardiovascular and neuromuscular systems. On the basis of B6 deficiency, the introduction of these components contributes to the rapid replacement of the deficiency. Cyanocobalamin( B12) promotes the synthesis of the myelin sheath. The component stimulates hemopoiesis, reduces pain caused by lesions in the nervous( peripheral) system. The compound also normalizes the nucleic acid metabolism by the activation of folic acid. As a local anesthetic, lidocaine is present in the formulation. This component provides different types of anesthesia( conductive, infiltration, terminal).

With intravenous administration of the preparation "Milgamma", the indications for use of which will be described below, rapid absorption of thiamine is noted. The component actively penetrates into the blood, reaching a maximum concentration 15 minutes after the injection. When injected into the muscle, pyridoxine is rapidly absorbed and distributed in the body. The component plays the role of coenzyme. Pyridoxine passes the placental barrier, is found in milk.

The drug is recommended as a symptomatic and pathogenetic agent in the complex treatment of syndromes and diseases of the nervous system of different origin. A medication is prescribed, in particular, with neuritis( retrobulbar including), neuralgia, paresis of the facial nerve. For ganglionitis( including herpes zoster), plexopathy, polyneuropathy( neuropathic, alcoholic), the drug "Milgamma" is also recommended. Indications for the use of drugs include also lumboschialgia, radiculopathy, muscular-tonic syndromes. The drug effectively helps to eliminate the manifestations of neurologic osteochondrosis, nighttime convulsions, especially in patients of the older age group.

In prescribing the scheme for the administration of Milgamma, indications for use are a fundamental factor. The tolerability and age of the patient are also taken into account. In severe pain syndrome therapy is more appropriate to start with the introduction of the muscle. The dose is 2 ml. The drug is administered every day for 5-10 days. Later the patient( with improvement of the condition) is prescribed rarer injections or transferred to the oral form of taking Milgamma. Indications for the use of drugs include serious enough pathologies. In this regard, therapy is carried out under the supervision of a doctor.