In this short article we will discuss in detail the city of Kislovodsk, the sanatorium "Russia", its shortcomings and advantages, reviews about it and much more. Ready? Then we begin!

Sanatorium "Russia" The Ministry of Internal Affairs of Russia is an institution whose activities are aimed at the treatment, prevention and promotion of the health of persons residing in it. 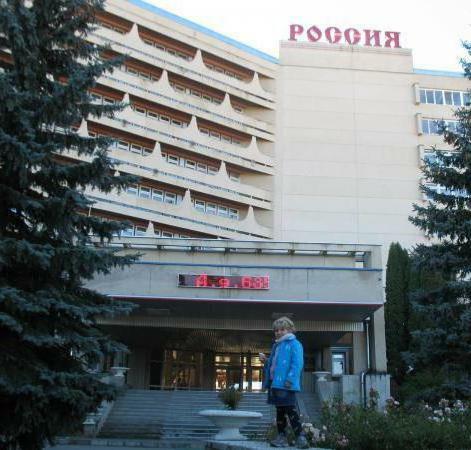 The main specialization of this sanatorium is the treatment of patients who suffer from diseases of the cardiovascular system, respiratory organs( not of tuberculosis origin) and the nervous system.

Sanatorium "Russia"( Kislovodsk) invites to the treatment of adults and children from 6 years of age, having a rest with their parents. Here you definitely like it!

The health resort is located in the resort zone of the Caucasian Mineral Waters, in the city called Kislovodsk. Sanatorium "Russia" uses for the treatment of its patients all those natural resources with which this region is so rich.

First of all, this is a unique mineral water - narzan, which is used for drinking and for baths. Narzan has proven its effectiveness in the treatment of heart defects, hypertension, angina pectoris, asthma and many other diseases.

Thanks to its medicinal properties, the guests of the sanatorium enjoy a wide popularity of mud treatments based on mud mud from Lake Tambukan, which has a wide spectrum of action.

Here, pure mountain air, rich in phytoncides and aromas of unique plants growing in the Kislovodsk healing park. In this regard, treatment in the sanatorium is prescribed to all patients suffering from respiratory diseases, as well as violations in the functioning of the musculoskeletal system.

The city of Kislovodsk, sanatorium "Russia" occupies a picturesque area in Vasyukova Balka, adjacent to the spa therapeutic park. The height above sea level here is about 830 meters.

In the well-maintained territory of the sanatorium complex, its pump room operates year-round, where guests take the mineral waters "Slavyanovskaya" and "Essentuki-4".

The sanatorium is designed as a single nine-storey building. The sleeping building, which is designed for 460 beds, is located in its central part. The medical and diagnostic base with a swimming pool, exercise room and sauna is adjacent to the central part of the building on one side, and on the other side - a concert hall, dance floor and a dining room that seats 450 people. This allows vacationers to move to different parts of the building, without leaving the room on the street, which increases the intensity and effectiveness of treatment. 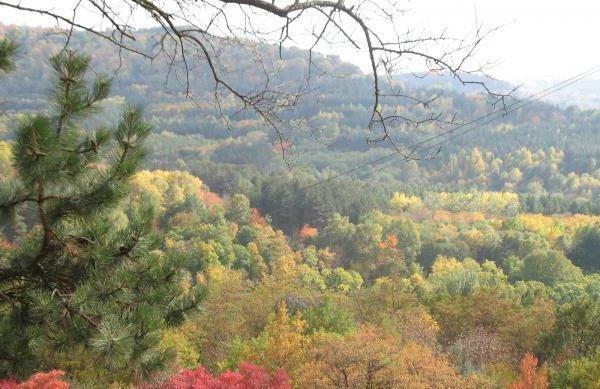 Sanatorium "Russia"( Kislovodsk) for accommodation of its customers offers the following varieties of rooms:

- improved single room, designed for single use, where for increased comfort of guests a semi-double bed is installed;

- a two-room suite that provides all the comforts for a comfortable double accommodation with a double bed set in it.

All rooms have a TV and a fridge. The rooms have their own bathroom with a shower or a bath, as well as a balcony that is furnished with furniture for relaxation.

Sanatorium "Russia"( Kislovodsk) provides vacationers with medical nutrition, which includes products in accordance with provisions for food security for persons serving in the structure of the Ministry of Internal Affairs of Russia. When compiling the menu, the recommendations of dietitians are followed. 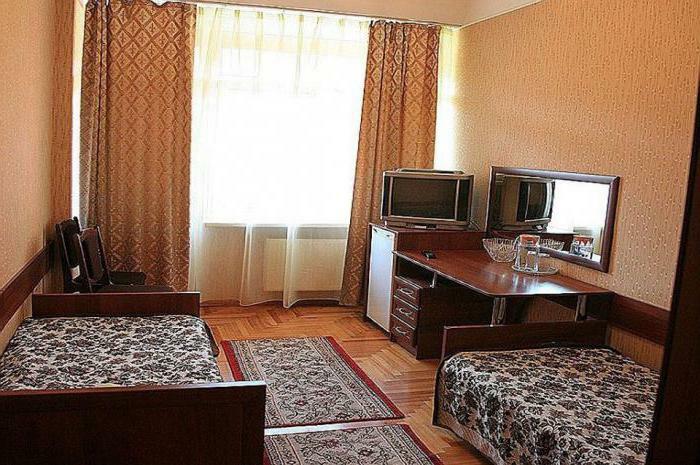 The sanatorium has four meals a day, provided by the order of customers, which they can do, based on the menu offered. Vegetarian, unloading, protein and other types of diets are practiced.

Visitors are given an excellent opportunity to take care of health and beauty. For this, the infrastructure of the sanatorium complex includes a solarium, sauna, Turkish bath, hairdresser, cosmetic and manicure rooms. For sports and pleasant leisure activities, a swimming pool is provided in the sanatorium, where aqua aerobics classes, a billiard room, sports grounds, a gym, a tennis court, as well as a library, club, concerts, discotheques, a shop and a newsstand are organized.

Not leaving the territory of the sanatorium, vacationers can order air and railway tickets, taxis, choose an interesting excursion.

At the request of guests, you can use the computer with Internet access. Copying services and facsimile services are also provided.

Everyone who arrived in Kislovodsk will receive qualified treatment. Sanatorium "Russia" works on the following profiles:

- prevention and treatment of a wide range of diseases of the cardiovascular system of the body;

- restoration of functions of the nervous system.

Sanatorium "Russia" also carries out treatment of gynecological and urological diseases, diseases of the genitourinary system, joints, organs of the gastrointestinal tract.

In the treatment of these diseases, sanatorium doctors use a variety of techniques using narzan baths, pine needles and natural therapeutic eucalyptus salts. 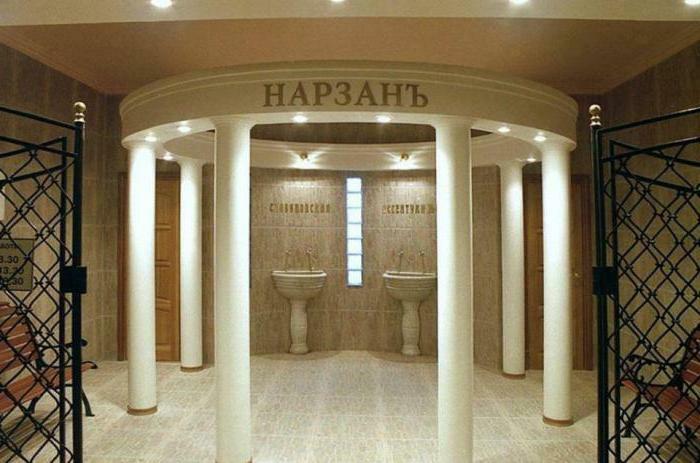 Specialists of the sanatorium will make a rest for various types of massage. In the inhalatorium, patients can undergo a course of medical inhalations. A number of ultrasound and diagnostic studies, physiotherapy procedures are appointed by the treating physicians to their patients.

Here, the rest are waiting for the phytobar and aromatherapy sessions. Of course, the main natural factor that can cure a number of diseases are mineral waters: narzan, "Essentuki No. 4", "Slavyanovskaya".A mild climate and sun rays supplement the positive effect of mineral waters on the body.

It is possible to get to Kislovodsk, the sanatorium of the Ministry of Internal Affairs "Russia", by rail. The nearest international airport is in the city of Mineralnye Vody, from here the Min. Water - Kislovodsk.

Want to see what the sanatorium of the Ministry of Internal Affairs "Russia"( Kislovodsk) looks like? Photos of treatment rooms and equipment, rooms, places and recreational areas are presented in large numbers not only on the sanatorium's website, but also in this article!

The reviews of patients confirm the fact that the sanatorium does its best to reach a higher level, as close as possible to the world standard and standards. At the same time, prices in the sanatorium did not reach such a high level as in foreign hospitals. 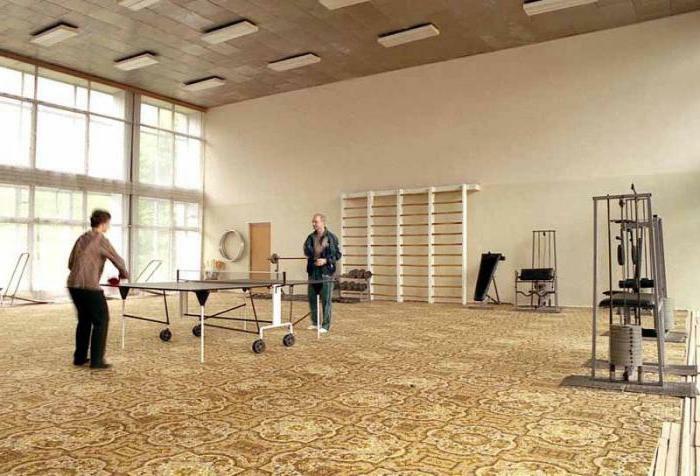 Visitors highly appreciate the professional level of doctors and nurses. Also, the opinions of the guests of the sanatorium, according to the feedback left, converge in a positive assessment of the treatment base that the sanatorium has.

Also, according to guests' reviews, the sanatorium has a beautiful and very well-groomed territory. They did not cause any complaints, they were clean and cozy.

Some guests have a note of displeasure in response to the insufficient number of procedures assigned to them. Although everyone understands that the main factor in the appointment of doctors is the diagnosis established by patients.