Cyber-knife: reviews of the operated. Cost of surgery in Russia and abroad

The body of a healthy person works like a clock. But it's worth it for any body to get sick, as the whole body fails. Most often the cause of problems are various ailments, and the most dangerous among them are oncological ones. It is in the fight against them that mankind regularly develops all new techniques and equipment that can defeat cancer. One such is the Cyber ​​Knife. The responses of the operated patients who managed to stop the swelling make us think and inspire hope. More about this effective treatment, we'll talk further. 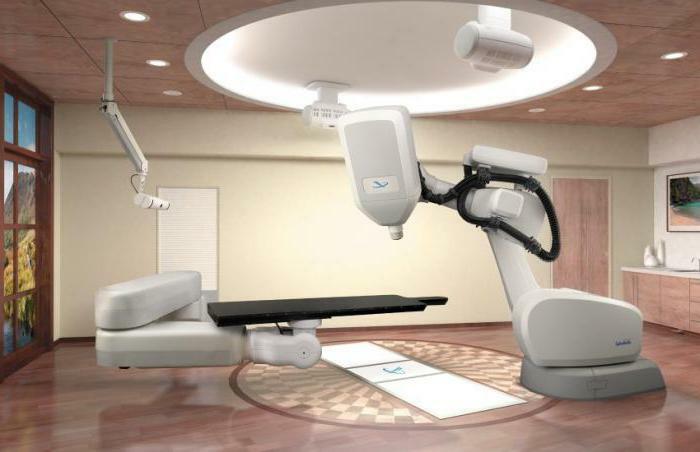 What is a Cyberknife?

The device, which is popularly known as the "spatial scalpel", is a specialized radiosurgical equipment designed to get rid of various pathological neoplasms of the brain and the cranial cavity. According to experts, it works on the basis of X-rays, and as a radiation source it uses a high-precision linear accelerator.

Brief information from the history of the

device The first Cyber-knife( reviews operated on using this system can be found in this article) was developed in early 1992.Its creator was the American professor John Adler, who previously taught at Stanford University.

Working on the system, the inventor set himself the goal - to overcome the existing shortcomings, which are characteristic for already known devices in the field of radiosurgery. At the same time he managed to combine a system of control over the image and a controlled robotic arm.

Seven years after a series of tests, the device finally worked, and the very first patients were people with a swelling of the neck and head. After successfully carrying out more than a hundred operations, the system has proved itself well. And since people felt better after the Cyber ​​knife, it was decided to expand the capabilities of the unit. Exactly five years later it was already used with might and main to treat neoplasms of any localization. 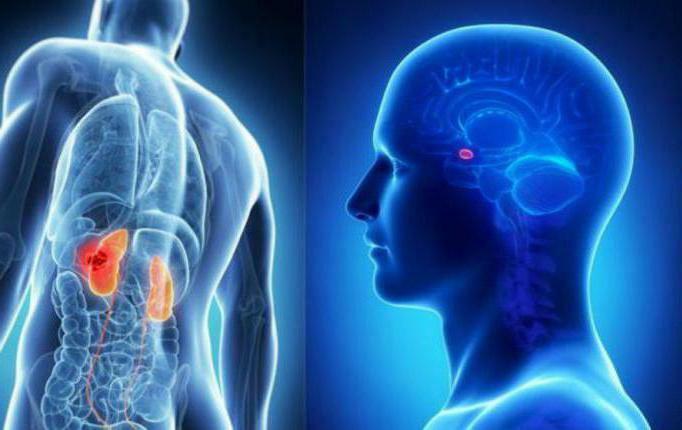 How does the system work?

Linear accelerator, or Cyber-knife, is, as a rule, on a special robot console. According to the developers, it has about six degrees of freedom, allowing to provide 1 200 positions for an X-ray beam during irradiation.

The radiation itself is carried out with the help of a mobile robotic "hand", which easily redirects a beam of rays to a tumor that needs treatment. In this case, the computerized console allows you to track the location of the tumor taking into account its possible changes, for example, during the breathing process of the patient.

What can I do with a Cyberknife?

Unlike other similar equipment, Cyber ​​Knife surgery allows not only to remove the tumor without surgery, but also makes it possible to get rid of metastases in all parts of the body, including respiratory organs. With the help of the "knife" you can eliminate the following neoplasms:

Cyber-knife( reviews operated on will help you learn more about the postoperative period) is also used in the treatment of a relapsing tumor located on previously irradiated areas of the body. And at the same time there is a chance to localize several tumor sites at once. 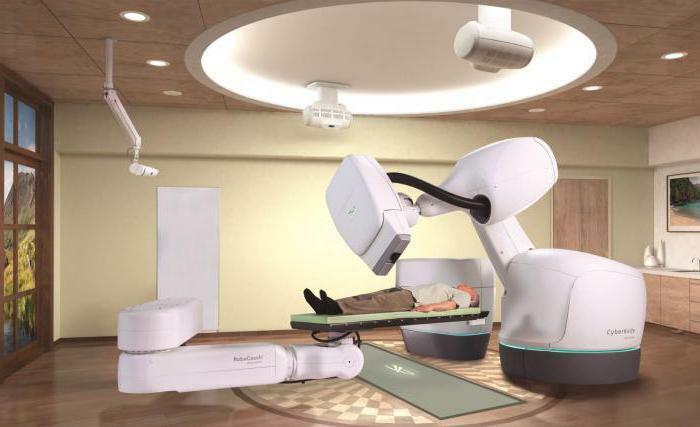 When can I use the device?

As it turned out, not all malignant and benign neoplasms can be treated with Cyber ​​knife. According to experts, the oncological outgrowth or focus should not exceed 4-5 cm. And in the presence of metastases, the patient must undergo additional histological examination in order to verify the condition of the focus.

In addition, the general physical condition of the oncological patient should be stable, which will allow him to lie for a long time without moving during the procedure.

How is the preparation process for treatment?

Before the Cyber-knife is used( feedback from the operated ones confirm this), the patients are expected to have a professional consultation of the oncologist-radiotherapist in one of the clinics where the treatment method works. At the second stage, the patient is recommended to undergo a simple procedure of topometry performed on the CT apparatus. According to experts, it must be done to determine the location of the tumor.

In the third stage, as a rule, irradiation modeling takes place taking into account the healthy organs and tissues surrounding the tumor. And, finally, after all this, the patient expects one or more sessions of irradiation with the Cyber-knife system. 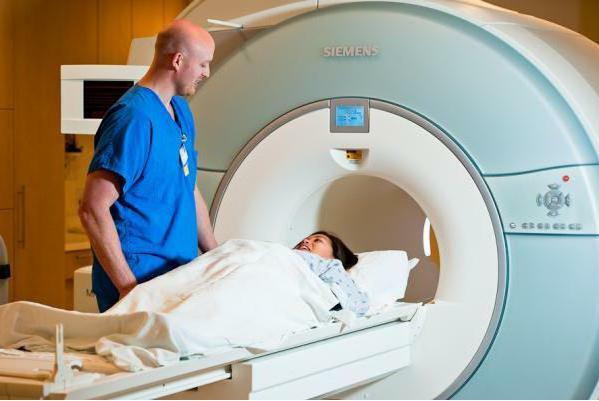 Is hospitalization required during treatment?

Regardless of whether you have chosen the Burdenko hospital or any other clinic in Moscow and outside Russia, treatment with Cyberknife does not require mandatory hospitalization. According to experts, the irradiation process is carried out on an outpatient basis. It follows that after the procedure the patient leaves the medical institution and can safely return to his usual regime of life.

What is the duration of the course of treatment?

Depending on each individual case, the course of radiation therapy is 1-5 sessions. In this case, each takes about 30-120 minutes. The number of necessary repetitions is established and controlled by the attending physician. 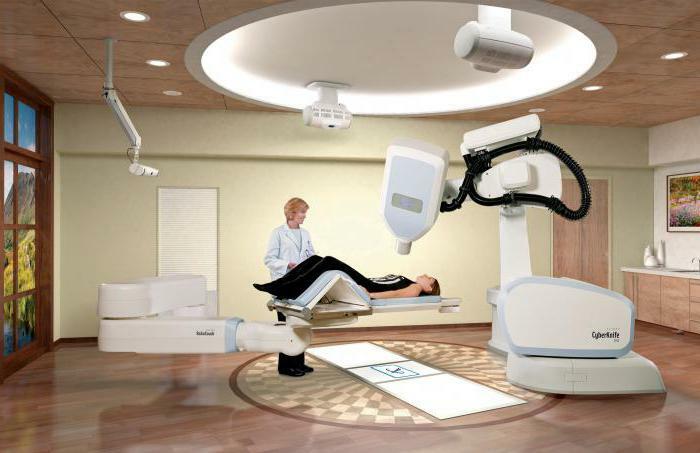 What are the benefits of treatment?

Among the main advantages of using radiation equipment called Cyber-knife can be identified as follows:

And, of course, every patient has the right to choose the clinic that he will like. Where is the therapy practiced using the Cyber-knife system? In Moscow, St. Petersburg, Kiev, Dnepropetrovsk there are complexes where patients are provided with such services.

Are there any disadvantages of treatment?

Despite the whole list of significant advantages, the Cyber-knife system has a number of drawbacks. And the first of them is that the effect of the applied treatment does not immediately manifest itself. The first signs of positive changes in the patient's condition can be observed after 2-3 months after irradiation. At the same time, some tumors stop growing and gradually disappear, while others recover much longer. And for the monitoring of the patient's condition, specialists insist on periodic CT and MRI performed once every six months.

The second important disadvantage is the Cyber-knife( in Burdenko this equipment is in the medical-diagnostic centers of the hospital) is not able to eliminate some types of malignant neoplasms. These include tumors that exceed the maximum limit of equipment( 6x6 cm).

In addition, an undeniable disadvantage is the availability of a huge queue for treatment. This is due to the low capacity of the centers( 2-3 patients per day).And, finally, many cancer patients are finally upset by the price of the procedures, which at times exceed the cost of ordinary radiotherapy. 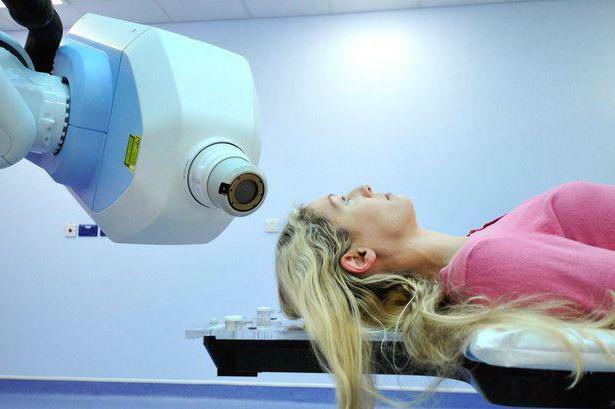 Where can I find equipment?

Despite all the uniqueness of this equipment, it can not be found in all medical institutions. According to the manufacturer, at present there are about 250 Cyber ​​Knife installations in the world. Most of them are in US clinics, Japan is the second largest, followed by Europe and Asia. For example, there is a device in the Moscow Research Institute named after P. A. Herzen, located at: 2nd Botkinsky Ave, 3.

At this institute today there are qualified specialists with a vast experience of treating patients suffering from oncological diseases of differentseverity. If you are interested in the Cyber-knife system( the cost of treatment depends on the availability of related services), you can always register for a preliminary consultation on the website of Mnioi.ru.

In search of professional medical care using the innovative Cyber-knife system, you can contact one of the clinics of the federal network of nuclear medicine centers "PET-Technologies".They are located in Moscow, Ufa, Yekaterinburg, Lipetsk, Orel and Tambov. You can get the reception of specialists by calling the hotline: +8( 800) 70 70 300.

Another institution where the treatment is practiced with the help of the Cyberknife is the Main Military Clinical Hospital of Burdenko. It is located in Moscow at the address: Hospital Square, 3. For recording to specialists, the hotline of the organization works: +8( 499) 263 53 00.

Treatment of cancer in Israel

Of course, the system using the "spatial scalpel" is widely spread abroad. For example, she is in Israel, at the Ichilov Medical Center. Diagnosis and treatment of skin, lung, trachea, prostate, kidney and genitourinary cancers are carried out here.

Work on the Cyber-knife system and in the other Israeli clinic - "Top Assuta".Diagnosis and treatment of tumors of the brain, kidneys, lungs, pancreas and stomach, liver, prostate and other organs is also carried out here.

Cancer is being treated in Israel and the NetOnco clinic. In this institution, you can get rid of forty different tumor formations, including chordomas, hemangiomas, cavernomas and others.

What do patients say about the system?

Reviews about innovative equipment Cyber ​​knife can be heard very different. For example, one user is immensely grateful to the Moscow center, where her father was treated for prostate cancer in 3-4 stages. According to her, after several procedures the patient feels well.

Another claims that his condition is still uncertain, since two weeks have not passed since the treatment. He emphasizes that scarring and scars from the irradiation process did not remain, and the working capacity of the leg, which had previously refused, was restored.