Among the bright packs on the shelves of tobacco stalls, the packaging is particularly prominent, with "Peter 1" written in large letters. Cigarettes with this name are produced by the well-known Russian company Petro, located in the northern capital of our country.

Japan Tobacco International was formed in 1999 after the famous Japan Tobacco Corporation has joined a part of American business in this area outside the United States. During its existence, it has mastered the production of many world brands. Among them besides Camel, Salem, LD, Sobranie and Mild Seven, there is a name unfamiliar to the mass buyer."Peter 1" - cigarettes, which appeared on the shelves of shops only since 1995.They are issued by the well-known in Russia society "Petro", located in St. Petersburg. This enterprise is a part of the Japanese corporation and adequately represents it in the territory of our country. 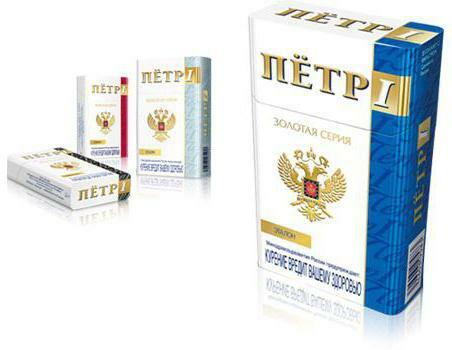 According to specialists of "Peter 1" - high-quality cigarettes. This is confirmed by the fact that for the whole history of their existence they managed to get the proud title "People's Brand" twice and even once were recognized as the "Brand of the Year".This indicates that the products really liked the consumer. Of course, after all, "Peter 1" - cigarettes, which are produced on modern equipment under the guidance of international experts.

Purely externally pack of cigarettes "Peter 1" is a usual hard pack with a convertible top, in which there are 20 cigarettes with a filter. It is decorated very brightly and contains on its front side various drawings, depending on the type of cigarettes that are in it. It should be noted that a special mixture of three tobacco varieties is used for production:

1) Berley, which itself has a rich, rich taste.

2) "Virginia".This component gives the product a softness with a note of enveloping velvety.

3) Additional mixtures to give a special flavor.

The result is a product that meets all international standards. In recent years, more than three dozen different types of these cigarettes have been developed. Especially worth highlighting a line of flavors called the "Gold Series", which includes such options as: "Balance", "Etalon", "Ultra", "Classic", "Light" and "Ultralight". 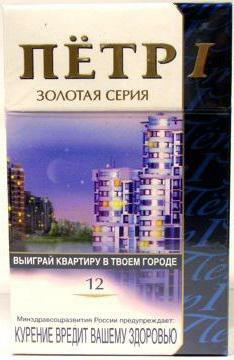 Technologists of the company try to use modern novelties in production. For example, buyers really liked the "filter-mouthpiece".Smoking with it becomes not only convenient, but also delivers aesthetic pleasure.

Classic cigarettes "Peter 1" are very popular. The black color of the packaging makes them more visible in storefronts. Here, the cultural and social peculiarity of the Petersburg audience of smokers is still working. If the rest of the regions are considered to be elite packs of screaming colors( for example, gold ones), then in the northern capital on this account their opinion. Bright shades, they consider ornate or even vulgar. Here, keep a low-key tone. Best if it's dark blue or black. 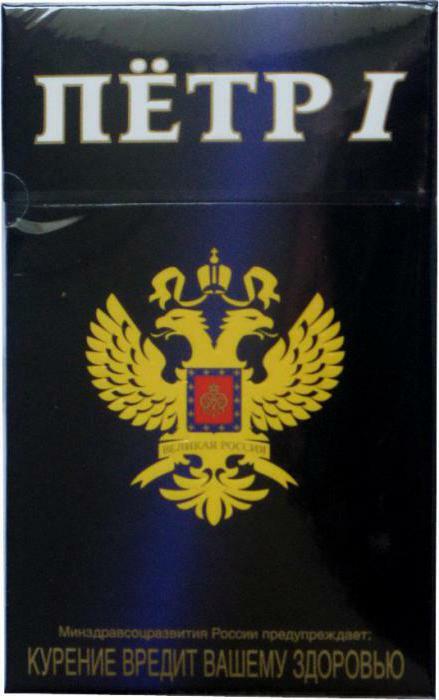 Cigarettes with the name of Peter the Great are made in the King size format from high quality tobacco. They are distinguished by a very high content of controlled components: resin - 12 milligrams, CO2 - 10-12 milligrams, and nicotine - 0.8 milligrams in each cigarette. Such characteristics suggest that the buyers of this product are likely to be men. In addition to the unique palatability and pleasant aroma also attracts a low price. The cost in the range of 50 to 65 rubles for one pack makes the product quite a profitable acquisition. In this price segment, it looks preferable.