The most common cause of death in nature is drowning. In the risk group are not only those who can not swim, but also people who are in a state of altered consciousness, as well as children and cores. 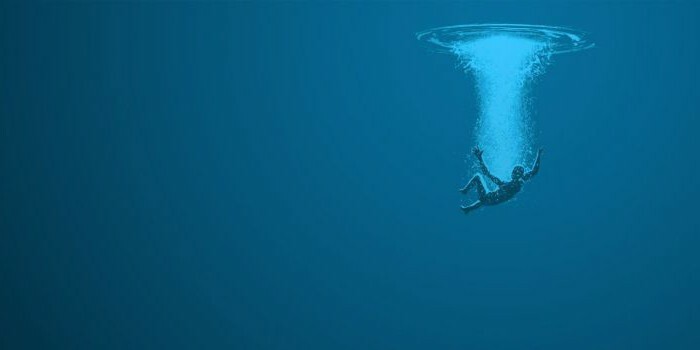 According to the latest amendments, drowning is a process that causes damage to the respiratory tract due to being in a liquid medium. Previously, this definition sounded like death from the ingress of water( or other liquids) into the airways and lungs. But it was not accurate enough.

Modern formulation implies that the liquid becomes a barrier to air entry into the respiratory tract. But this does not mean that a person must necessarily die. In any case, this will be considered a drowning.

There are several types of drowning depending on the mechanism of the process: 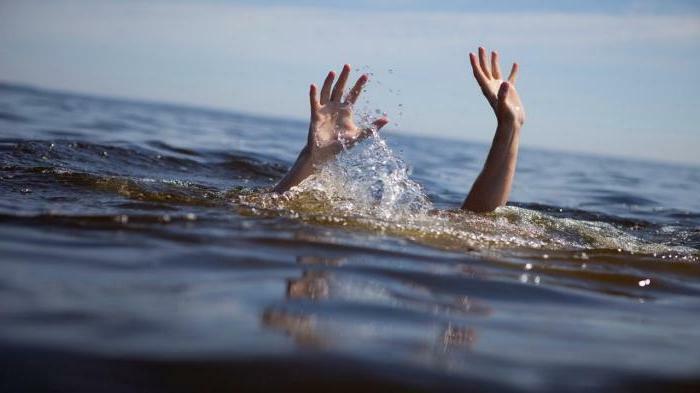 First of all, drowning is due to the fact that bathers ignore the rules of behavior on the water, such as: "do not swim for buoys," "do not swim in water with an unknown bottom," "do not swim in the storm."In addition, people who do not know how to swim and suddenly fall into the water at a considerable depth begin to flounder, quickly expend their energy and air, and thereby accelerate their immersion.

Scuba divers and lovers of diving often can not correctly calculate the time and drown, or they begin an attack of sickle sickness when the float is too rapid. Of particular importance are such factors as the presence of waterfalls and whirlpools, strong currents or muddy bottom. 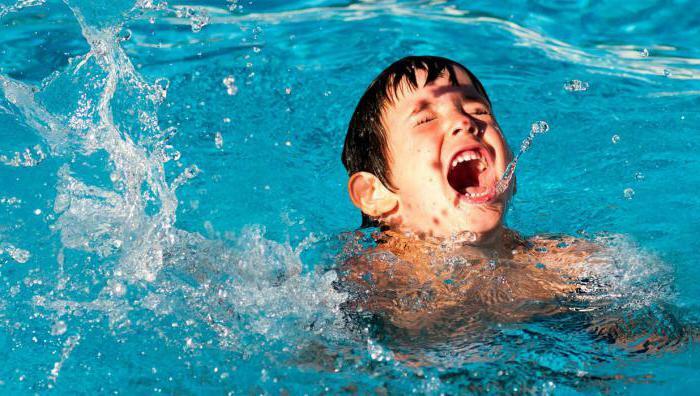 Death in water can be conditionally divided into two types: freshwater and marine, because the chain of pathological reactions will be different. Fresh water through the wall of the alveoli enters the bloodstream and dilutes it. Consequently, the volume of circulating fluid( BCC) is rapidly increased, the load on the heart is increased, and all this leads to its stopping. In addition, because of fresh water, hemolysis( destruction) of erythrocytes occurs. Simultaneously, the body increases the amount of free bilirubin, hemoglobin and potassium. Kidneys can not cope with such a load and can refuse.

Drowning in salt water, on the contrary, leads to a thickening of the blood, and as a result - increased thrombus formation. Most often, cardiac arrest is due to thrombosis of the coronary arteries. Syncopal drowning has a reflex mechanism and is not associated with the mineral composition of the liquid, but directly depends on its temperature and the conditions under which a person was in the water( for example, a sharp fall when dropped).

With true drowning in water, three clinical periods are identified: 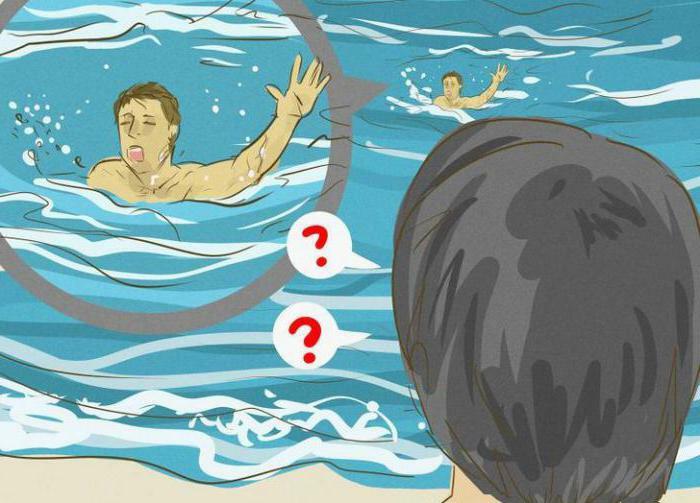 While the person is still in the water, you can distinguish the following signs of drowning:

Aseptic drowning is characterized by alcoholic intoxication or head trauma. Pulse is rare, arrhythmic, palpable only on large vessels. The lower respiratory tract, as a rule, is clean, or there is an insignificant amount of fluid in them. Death comes in four to five minutes. Resuscitation is inhibited by laryngospasm and compression of teeth. 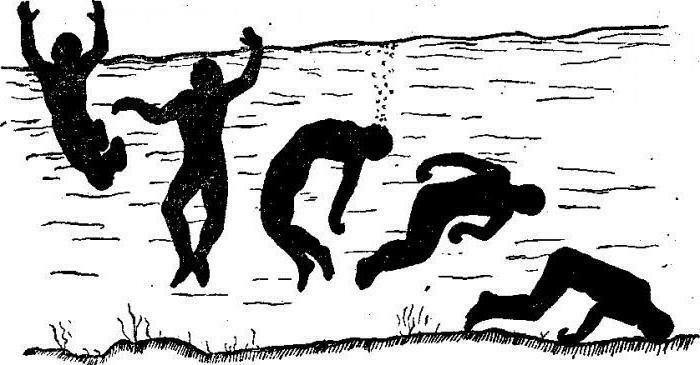 Syncopal drowning leaves behind the characteristic signs that can be seen at the autopsy in the forensic office. Among other things, the signs of fast-onset death are prevalent, such as bright cyanotic spilled cadaveric spots, liquid blood in the cavities of the heart and the main vessels, and the absence of a pink foam pillar at the mouth.

In addition, with true drowning, the fluid is found in the terminal sections of the bronchioles and in the sphenoid bone of the skull, the lungs are swollen, ribs are printed on them, hemorrhages under the pleura. Plankton, which lives in a pond, is found not only in the stomach and lungs, but also in other organs, indicating that it got there with a blood stream.

You can also identify signs of finding a corpse in the water: the skin is pale, wrinkled at the fingertips( so-called "hands of the laundress"), and with prolonged stay in the liquid, it can fade together with nails like gloves. The presence of sand, silt and algae on the clothes and hair of the victim also indicates that the corpse was caught from the water.

The longer the body is in the water, the harder it is to determine the cause of death, and if it has any injuries, the marine fauna will quickly reach the corpse and damage the remains to such an extent that all material evidence will be destroyed. 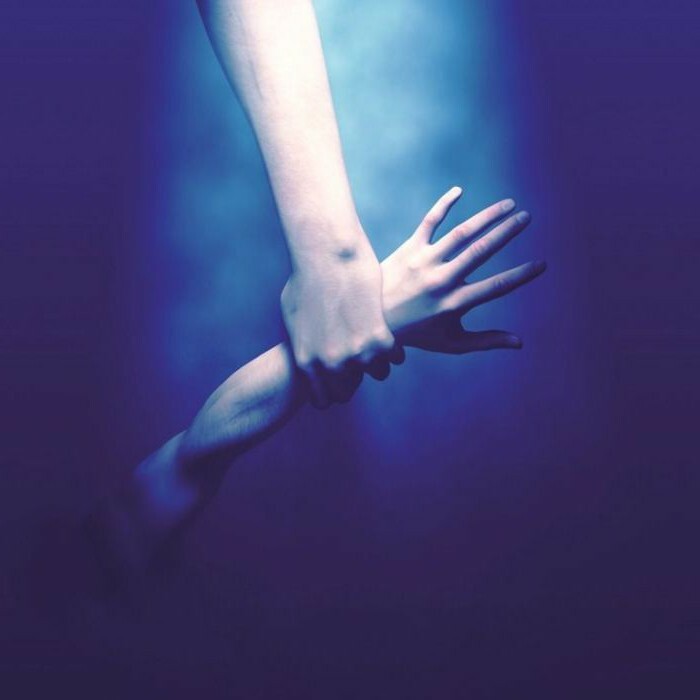 These rules are the same for all types of assistance to victims on the water. Emergency assistance for drowning is a sequential algorithm of actions that will help to quickly make a decision in a critical situation.

First, you need to make sure that the lifesaver's life is not in danger. This is important, since the benefit of saving must exceed possible harm. The victim is removed from the water. This must be done carefully, since a person may have a fracture of the spine, and, therefore, it must be transported from the reservoir on the board or shield.

Secondly, to lay the victim so that he tucked his stomach into the knee of the rescuer, but only on condition that no more than three to five minutes passed from the moment of drowning. If by the time of catching a person from the reservoir he had been unconscious for a long time, then it is necessary to immediately start cardiopulmonary resuscitation. Clean the oral cavity for better airflow. At this stage, be sure to call the ambulance.

From the third step, emergency help begins when drowning - you need to check your pupils, pulse, and breathing. Then, making sure that all of the above signs are absent, it is necessary to begin receptions CPR.Continue to rock your heart and breathe in air until the ambulance crew arrives. If spontaneous breathing does not appear, it can save the victim life.

Help in drowning after restoring breathing, palpitation and consciousness consists in warming the person and controlling the vital signs. Until the arrival of medical personnel for the injured, unfortunately, nothing can be done.

Properly rendered emergency aid for drowning can help doctors stabilize the condition of the victim in the future. If spontaneous breathing has not recovered, then the patient is transferred to the artificial ventilation of the lungs, the trachea and bronchial tubes are sanitized. Drug therapy necessarily includes prevention of pulmonary edema and acute cardiovascular insufficiency. If the drowning was in fresh water, then diuretic and blood components are prescribed, and when drowning in a saline pond - saline and glucose. Be sure to carry out correction of the acid-base state. After urgent activities, as a rule, a short course of antibiotics is prescribed to prevent infection.