Septefril: instructions for use. Method of use of the drug in children

Throat diseases are often corrected by medications that are applied topically. These are so-called lozenges and tablets for resorption. One of these drugs is the drug "Septefril".Instructions for use of the drug will be discussed in the article. You will learn about the features of using the formula in children.

Description of the medicinal product, its composition and price category

About the preparation "Septefril-Darnitsa" the instruction for use informs that it is an antiseptic. The medicine is produced by the Ukrainian pharmaceutical company. The average cost of 10 tablets is 5 hryvnia or 15 rubles. In a pack you can buy 20 lozenges for resorption. The price of such medication will be, respectively, higher.

The preparation contains an antimicrobial active substance - decamethoxin. It is effective against many microorganisms. Also, the drug acts on the permeability of the mucous membranes.

What does the instructions for use tell the patients about the Septefril medication? The remedy is used for inflammatory diseases of the oral cavity, which are caused by bacteria and fungi. The medicine is prescribed for tonsillitis, stomatitis, gingivitis, laryngitis and so on. Often tablets are used to sanitize the oral cavity after surgery and in front of them.

Before using Septefril( tablets), the instructions for use should be carefully examined. Do not apply the drug with increased sensitivity to its constituents. It is forbidden to use the compound for children under 5 years old. Medication should not be taken without consulting a doctor to pregnant women and people with diabetes. 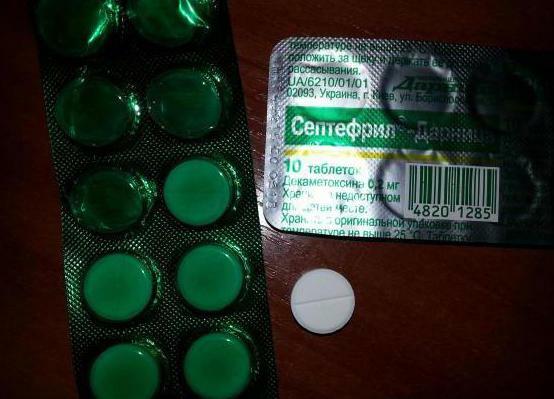 For children, the prescribed medication is prescribed only after reaching the age of 5 years - this you already know. However, doctors say that such a restriction is introduced due to the fact that a small child is not able to dissolve the pill. If the baby can use drugs in this way, the doctor can prescribe this medicine.

Depending on the age and symptoms of the disease, an individual drug regimen is prescribed. About the drug "Septefril"( pills) instructions for use says that adults are recommended to one lozenge up to 6 times a day. Children are prescribed a drug with a frequency of 3-4 times a day. The duration of therapy is determined exclusively by the doctor. Usually recovery occurs on the 4th day. If necessary, the course of the drug can be extended to one week.

After taking the drug, you should refrain from eating and drinking for the next two hours. In this case, you will achieve the maximum effect of therapy.

The preparation of "Septeptil" instructions for use warns that often the composition causes side effects. Most often they are manifested by burning of the mucous membrane and increased salivation. In this case, stop using tablets. Developing symptoms will pass independently within a few minutes after application. The formulation also sometimes causes allergies. If it occurs urgently, seem to the specialist.

If you combine the described drug with other antibiotics, then the action of the latter can be strengthened. Be sure to tell your doctor if you have to take any formulations that are not assigned to them. During the treatment, monitor the blood sugar level. When it is increased, it is necessary to replace the described drug with some other one, which does not contain lactose and fructose. 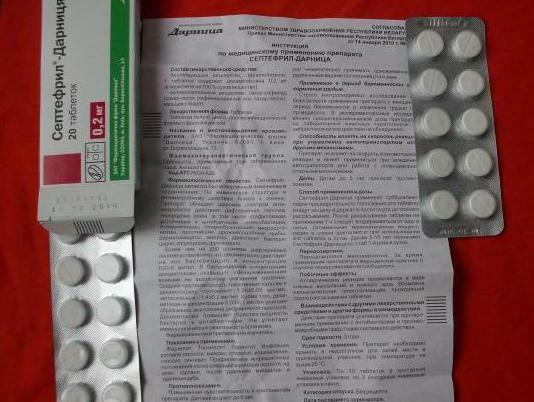 You learned about an inexpensive, but quite effective drug called "Septephril".Description and recommendations for use are presented to you in this article. Remember that the use of any medication must be preliminarily negotiated with a specialist. Only in this case you can be sure of the correctness of the therapy. If after a lapse of one week using the "Septefril" tablets you do not feel better - see a doctor immediately. Perhaps you need other( strong) compounds for correction. Strong to you health!