"Asparks": analogues, instructions for use

Drugs that regulate the metabolic processes of the body represent a separate group of drugs widely used to treat all sorts of diseases. And let this phrase does not seem vague and meaningless, it really is. Any disease, any pathological process taking place in our body, is accompanied by a violation of metabolic processes taking place at the cell level. And it is the correction of such metabolic disorders that, for the most part, leads to recovery. One of the drugs that are used to correct these disorders in the body is Asparks. He is prescribed for many pathologies. Let's consider "Asparks", analogues of the drug, which are used today.

As already mentioned, the drug "Asparka" refers to a group of drugs that affect the metabolic processes of the body. The mechanism of action of the drug is based on the following points. 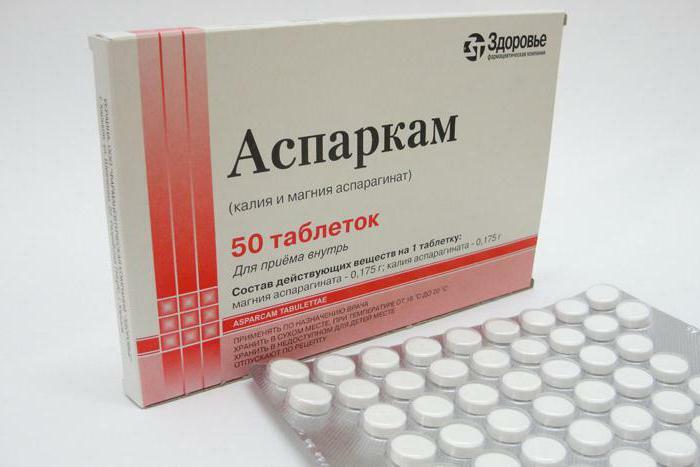 It is widely known that it is necessary to maintain the constancy of the ionic composition of the intracellular environment. At the same time, special attention is paid to the ions of potassium and magnesium in the processes of cell metabolism. Due to the ability of the so-called aspaginates( included in the composition of this drug) to participate in the process of intracellular ion transport, the introduction of Asparkam increases their concentration and improves cell metabolism.

Due to the fact that the heart is the main organ that reacts delicately to ion imbalance( especially potassium ions), Asparcum shows cardioprotective effect by eliminating ion imbalance in cardiomyocytes. This, in turn, is manifested by a decrease in the processes of excitability and conduction, which is reflected in the antiarrhythmic effect of the drug.

Due to the effect on the content of magnesium ions, Asparkam affects the sodium potassium cell pump, reducing the sodium intracellular concentration and contributing to the repolarization processes of the cell membrane. The increase in the membrane potential leads to the fact that a smaller amount of calcium ions is in the cytoplasm, participating in the processes of electromechanical conjugation of actin and myosin cardiomyocytes. 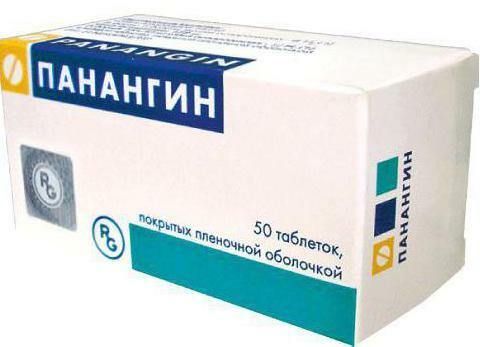 In addition, aspartate, which is part of the drug, promotes the activation of metabolic processes, increases not only the amino acid synthesis, but also the synthesis of amino sugars and lipids involved in the regulation of intracellular metabolism. This circumstance promotes the enhancement of energy metabolism in ischemic tissues and areas of the myocardium."Panangin" - an analog of "Asparkam" - due to the identical content of aspartate potassium and magnesium exhibits the same pharmacodynamic effects. This fact contributes to the almost identical prevalence of "Panangin" in cardiac practice.

Asparkam itself, analogues of this drug quickly and almost completely enter the systemic bloodstream. Excretion of the drug occurs mainly with the help of kidneys. After a single dose, the maximum concentration of the drug in the bloodstream is reached after 1-2 hours. From the bloodstream Asparcum falls in the form of ions of potassium, magnesium and aspartates into cells and begins to participate in their metabolic processes.

The tablet form of the preparation "Asparcum" is intended( and successfully used) for the therapy of diseases associated with heart failure. Thus, indications to the appointment may be postinfarction states, conditions after cardioversion or accompanied by a violation of the rhythm and conductivity of the myocardium."Asparks" is effective in the complex therapy of heart failure with the use of cardiac glycosides, as well as in situations of overdose or poisoning with saluretic drugs( diuretic drugs, which, in addition to increasing diuresis, enhance the excretion of ions from the body). 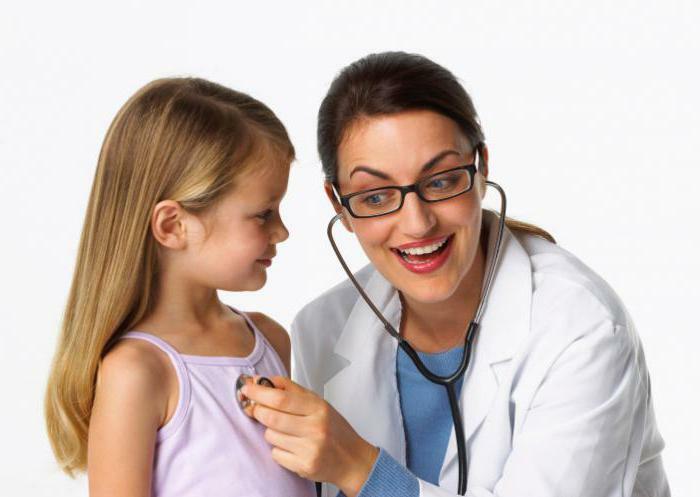 Injectable form of Asparkam is successfully used in the complex therapy of chronic heart failure, including after myocardial infarction, with rhythm and conduction disorders, as part of complex therapy. Contraindications to the prescription of

Due to the fact that Asparkam contains a large amount of magnesium and potassium ions, it is contraindicated in acute and chronic renal failure, as well as with increased sensitivity to one or several components of this drug. 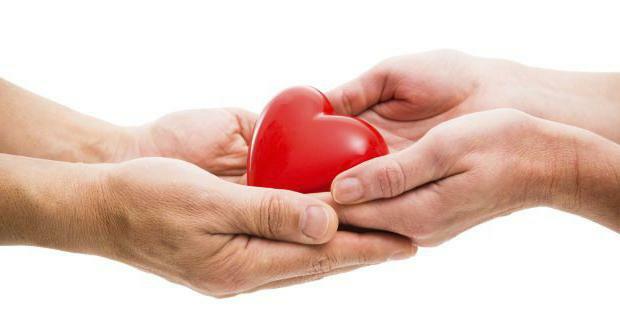 In case of cardiogenic shock( when systolic blood pressure drops below 90 mm Hg) it is not recommended to use Asparks, analogues. Instructions for use indicate that the drug is also contraindicated in Addison's disease and functional adrenal insufficiency, in cases of a patient having high-grade atrioventricular blockade and with a high content of potassium and magnesium ions in the blood plasma.

Way of administration and dose of

When using the tablet form of the drug Asparcamp take one or two tablets after meals three times a day. The duration of treatment is determined by the attending physician on the basis of the clinical course of the disease and the data of laboratory and instrumental methods of investigation.

Injectable form is given only for intravenous administration. The contents of one ampoule must be dissolved in 50 or 100 ml of sterile isotonic glucose solution, administered intravenously drip slowly. Repeated administration can be repeated no earlier than 4-6 hours after the previous prescription of Asparcum. Analogues of this drug( for example, "Panangin") are assigned identically."Panangin", like "Asparks", has a pronounced effect on the metabolism of myocardiocytes. Therefore, this analogue of Asparkam in Russia is widely used in cardiological hospitals.

In case of taking a tablet form, there may be disorders from the gastrointestinal tract, which are manifested by pain and burning in the epigastric region, nausea, vomiting. With prolonged admission, ulceration of the mucosa may occur.

Since the drug has a predominant effect on the cardiovascular system, it can cause arrhythmias, conduction disorders, atrioventricular blockades, and lowering of blood pressure.

From the side of the nervous system, paresthesias, tingling sensations, and seizures are noted. 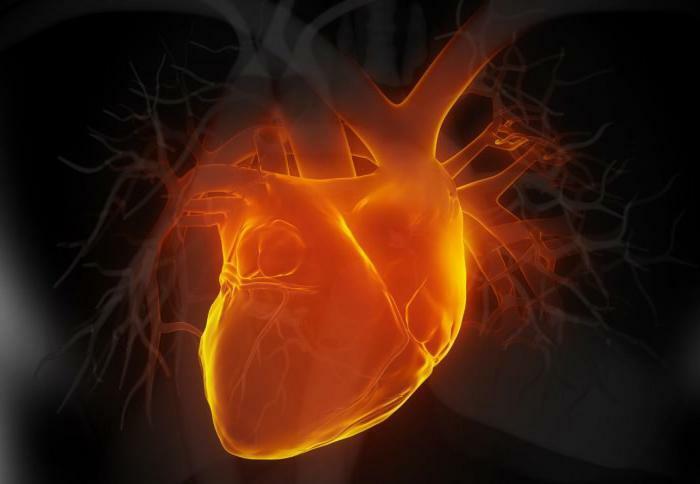 Due to the high content of magnesium ions and their penetration into the central nervous system, respiratory depression can be suppressed. Also, a feeling of fever with the introduction of Asparcum is often enough. Analogs of this drug have a similar symptomatology of adverse reactions and the frequency of their occurrence. In view of this, it is always necessary to ask the patient about the previous administration of this medication.

Special instructions for the use of Asparcum

Analogues for children are widely used in pediatric practice, although there is currently insufficient data on the use of Asparkam in children. Despite this, the drug is successfully used to treat cardiac diseases in pediatrics.

With prolonged reception of Asparkam, it is recommended to conduct careful monitoring of the electrolyte composition of blood plasma, to monitor electrocardiographic parameters. Also with extreme caution, the drug is used in patients with elevated levels of potassium in the blood plasma.

Among the existing generics of Asparkam in the pharmaceutical market, it is worth highlighting Panangin. Possessing high efficiency, this analog of Asparkam in Russia is widely used, since it has an identical composition and, accordingly, similar indications for use. And cardiological practice is an example. Thus, "Panangin" is an analog of "Asparkam" with the same composition.

Among other drugs that have a similar effect, it is necessary to note "Inosine", "Riboxin", "Meksaritm", "Propanorm", "Rhythmocardium".