Today we will tell you about what the preparation of "Simbalta" is. Instructions for the use of this drug, its composition, side effects and indications will be described below. Also from the presented article you will learn about the form in which this medication is issued, how much it costs, whether it has contraindications and how to apply it correctly. 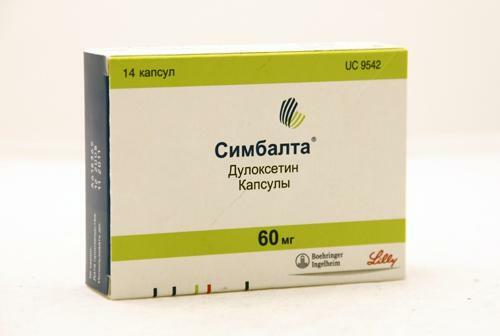 In what form can I buy the preparation of Simbalta, the instruction of which is enclosed in the package? Currently, this medication is available only in the form of intestine-soluble capsules. And each of them contains pellets, which have a white or grayish-white color.

What components does the "Simbalta" drug include? Instructions for the use of capsules states that their main active ingredient is duloxetine. It should also be noted that the composition of the drug in question includes additional substances in the form of sucrose, hypromellose, talc, succinate, white dye, hypromellose acetate, titanium dioxide, triethyl citrate, gelatin, sodium lauryl sulfate and iron oxide of yellow oxide.

Capsules can contain 60 and 30 mg of the drug. They are packed in blisters for 14 or 7 capsules. In one cardboard bundle there can be 1, 2 or 6 blisters.

Pharmacological characteristics of the drug

What is an active substance such as duloxetine? The instruction for the use of medicinal capsules states that such a preparation with the said active ingredient is a very good antidepressant. It is a reuptake inhibitor of norepinephrine and serotonin. It weakly suppresses the seizure of dopamine, and also has no affinity with dopamine, histamine, cholino- and adrenoreceptors.

How does duloxetine work? The instruction contains the following information on this account: the principle of action of this substance is to suppress the re-uptake of norepinephrine and serotonin. As a result, the noradrenergic and serotonergic neurotransmission in the nervous system increases markedly. It should also be noted that duloxetine quickly suppresses pain syndrome.

Drugs from the depression of the Simbalty type are absorbed from the gastrointestinal tract, the absorption begins a couple of hours after ingestion. The maximum concentration is reached after 6 hours. Simultaneous intake of food does not affect the concentration, but increases the time it takes from 6 to 10 hours. Specialists say that this indirectly reduces the degree of absorption( by 11%). 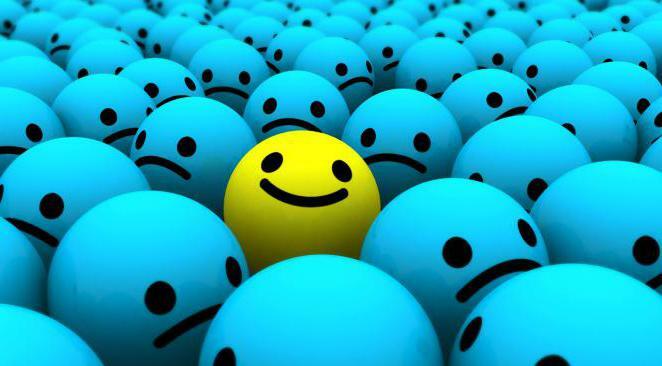 Binding of the drug to plasma proteins is high enough and reaches more than 90%.

The half-life of the medicament is 12 hours. In this case, he goes along with the urine in the form of metabolites.

According to studies, there are differences between pharmacokinetic processes occurring in women and men. Thus, the average clearance of the active component is lower in the fairer sex. However, there is no need to adjust the dose.

It should also be noted that during the studies, differences were established between the pharmacokinetic processes that occurred in elderly and middle-aged patients. It was found that the half-life of the drug is higher in the elderly than in young people. A dose adjustment is also not required.

In patients with chronic renal failure at terminal stage who are on hemodialysis, the concentration and AUC of duloxetine increase exactly by 2 times. That is why it is recommended to consider the expediency of lowering the dosages of the drug in patients with severe renal dysfunction.

Patients with symptoms of liver failure may be slowed by metabolism and half-life of duloxetine.

When is the Simbalta medication prescribed? Instructions for use include the following list of indications: 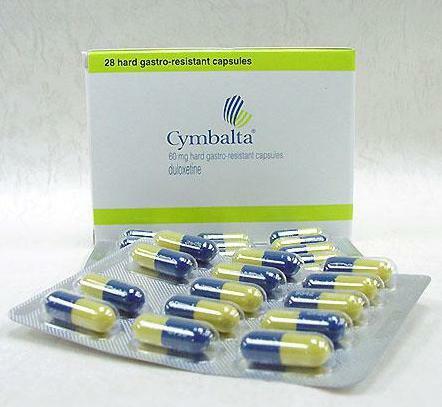 When can not take the medicine "Simbalta"?Instructions for use include the following list of contraindications:

medication with caution Use this medication with bipolar disorder and mania, convulsions, and the risk of developing an angle-closure glaucoma attack. Also, care must be taken with intraocular hypertension, suicidal thoughts, hyponatremia, impaired liver and kidney function.

Preparation of "Simbalta": instructions for use

The price of this drug is very high. However, its effectiveness is not subject to any doubts.

The presented medication is prescribed only for oral administration. Capsules must be swallowed whole, without crushing or chewing them. It should be specially noted that in no case should you add the drug to the food or mix it with any liquids, since such an action can easily harm the enteric coating.

Drugs for depression should be taken at an initial dosage of 60 mg once a day. To achieve a positive result, some patients increase this volume to a maximum dose of 120 mg twice daily.

In patients diagnosed with chronic renal failure, which occurs in the terminal stage, the initial dosage of the drug should be 30 mg once a day. If the patients have liver function disorders, then the indicated amount of the drug is recommended to reduce or reduce the frequency of admission. 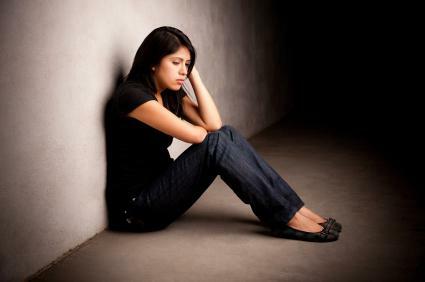 It should also be noted that it is necessary to avoid a sharp withdrawal of the medication. The amount of the drug should be reduced gradually over 1-2 weeks. If against this background there are expressed signs of withdrawal syndrome, it is recommended to continue treatment in the prescribed dosage. Subsequently, the doctor may continue to lower the dose, but even more slowly.

What do experts say about cases of overdoses with the drug "Simbalta"?The doctors' reviews contain the information that they have such data. To date, there are cases of overdose when taking the drug inside in an amount up to 3000 mg, as well as its combination with other means. By the way, one death was recorded.

Symptoms of combined or isolated overdose are the following conditions: clonic convulsions, drowsiness, vomiting, coma, tachycardia and serotonin syndrome. As for preclinical studies( animal experiments), the main symptoms of intoxication associated with uncontrolled medication use are disorders of the central nervous and digestive system. Also, patients may experience tremors, ataxia, clonic convulsions, vomiting and loss of appetite.

What should I do if I get an overdose? With the development of serotonin syndrome, corrective therapy with cyproheptadine should be immediately carried out, and methods for normalizing the body temperature of the patient should be used.

The patient is required to provide fresh air. It should also monitor the work of his heart and monitor life. All this must be done together with maintenance and symptomatic treatment.

If a little time has passed since taking the medication, then the stomach should be washed. Also, in order to limit the absorption of the drug, the patient is encouraged to drink activated charcoal. 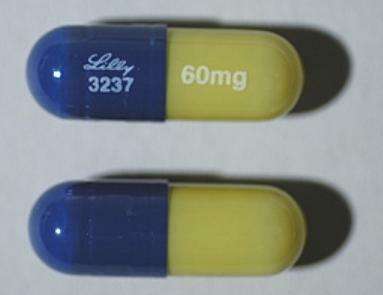 Can a negative effect on the health of a person take this medication? Consider the side effects of antidepressant drugs in more detail:

One can not help saying that such a side effect, like dizziness( sometimes headaches and nausea), is often noted when the drug is drastically abolished. By the way, in patients with diabetic neuropathy of a painful form, an increase in fasting blood glucose can be observed.

Reviews about the medicine

According to the reviews of specialists and patients, the drug under consideration fully copes with the task. After taking it, it eliminates anxiety disorder, and also promotes the disappearance of the depressive state. In addition, this medication well removes pain syndromes in the musculoskeletal system.

Interaction with other means of

Is it possible to conduct a joint intake of other drugs with the medicine "Simbalta"?The experts say that this remedy directly affects the effectiveness of certain drugs.

So, there is a risk of developing a serotonin syndrome if duloxetine is used in conjunction with MAOI.

Due to the fact that the isoenzyme CYP1A2 actively participates in the metabolism of the preparation "Simbalta", their simultaneous use can lead to an increase in the concentration of the latter.

It is not recommended to prescribe this medication together with other medicines that affect the central nervous system. Also, during its reception should not drink alcohol.

Sometimes with the simultaneous use of SSRIs and serotonergic drugs in patients there is a serotonin syndrome. Therefore, extreme care should be taken when using this drug with serotonergic antidepressants.

Because there is a potentially increased risk of bleeding, do not use duloxetine and anticoagulants( antithrombotic drugs) at the same time.

Is it possible to use "Simbalta", the price of which will be presented later, during pregnancy? Due to the lack of sufficient information on the use of duloxetine during the gestation period, this medication can be prescribed only if the benefit for the expectant mother is significantly greater than the risk for the baby.

It should also be noted that patients taking this remedy should be sure to warn their doctor about the onset or planning of pregnancy. 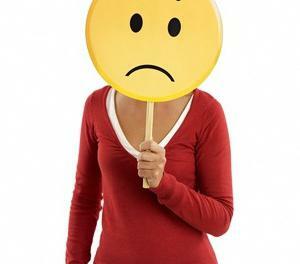 Studies have shown that taking antidepressants in women, especially in later periods, significantly increases the risk of persistent pulmonary hypertension in newborn babies. Moreover, withdrawal syndrome is also often observed in children in the event of an abrupt cessation of the use of duloxetine by a prospective mother in late pregnancy. Most of the symptoms of this condition were observed during childbirth or in the first days after.

Due to the fact that duloxetine is able to penetrate into breast milk, it is highly undesirable to breast-feed a child during therapy. Otherwise, the concentration of this substance in the fetus will be in the amount of 0.14% of the concentration in the mother.

Special instructions for the use of

When the patient is prescribed the Simbalta drug, the doctor must inform him that it is strictly prohibited to take this drug with MAO inhibitors at once. Otherwise, it can be fatal, as well as serious complications in the form of hyperthermia, myoclonus and pronounced excitation with the transition to coma.

It should also be noted that it is forbidden to take the drug for two weeks after the end of treatment with MAO inhibitors.

According to studies, in patients with manic conditions with the use of other medications that affect the nervous system, in conjunction with the "Simbalt" can worsen the existing disease.

In view of the fact that there is a possibility of suicidal attempts in case of depressive states, especially patients at risk should be observed.

Taking this medication can easily cause drowsiness. In this regard, patients who take this drug should take extra care when driving the machine and when working with dangerous moving mechanisms.

How much are the simbalt intestinal capsules? Their price can be different. It depends on the manufacturer and the mark-up of pharmacy chains. However, it should be noted that on average this drug costs about 1050 Russian rubles( 30 mg, 14 pieces).If you need to buy a medicine in a similar amount, but at a dosage of 60 mg, then you will have to give about 1150 rubles.

Now you know how much duloxetine costs. The price of it may increase or decrease depending on some factors. Currently, the purchase of this drug is not difficult. However, you can buy it only by prescription.

But what if you for any reason could not buy the medicinal capsules of Simbalt? Analogs of this drug are available in almost every pharmacy. Although the acquisition of them will also require a prescription from the doctor. 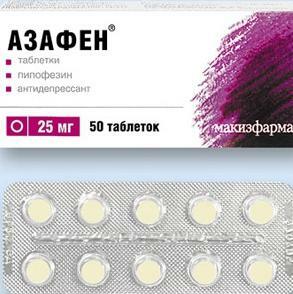 How can I replace the medication Simbalta? Among its analogues I would like to especially highlight the following medicines:

How to store and expiration date

What is the shelf life of the Simbalta preparation? According to the instructions and the date on the package, this remedy should not be taken after three years. In this case, it is recommended to store it in a dark place, where the air temperature does not exceed 20 degrees.