Injections in the hernia of the lumbar spine: a list of drugs, doctors' recommendations

The lumbar spine undergoes very heavy loads at any position of the human body. Therefore, it is here that there are different pathologies. The most serious disease of the lumbar spine is a herniated intervertebral disc. This pathology causes nerve infringement, because of which severe pains arise. In advanced cases, a hernia can be treated only surgically, but in the initial stages it is possible to use conservative therapy. But in any case, with severe pain, only injections with a hernia of the lumbar spine help. They are used to relieve acute symptoms so that the rest of the therapeutic methods can be used.

What is a hernia of the lumbar spine

Which injections will help? This question is asked by many patients experiencing severe back pain. After all, the symptoms of a hernia often can not be removed by conventional methods. To understand why this disease causes such severe pain, you need to know what a hernia is.

Intervertebral discs are a ring of cartilaginous tissue surrounding the soft pulpous core. They are located between the vertebrae and provide depreciation for any movement. Discs protect the vertebrae from abrasion, soften shocks and jolting when running and jumping, provide flexibility of the spine.

But in some cases there is a thinning of the cartilaginous tissue and the pulpous core is squeezed between the vertebrae. A hernia forms. This protrusion can squeeze the nerve roots, which causes severe pain. Usually the disease develops gradually, the pain is initially not strong. Especially if the appearance of a hernia is associated with degenerative-dystrophic processes in the cartilaginous tissue. But if the damage to the disc occurs after a trauma or a sharp increased load, then immediately there is a lot of pain.

A prolonged compression of the nerve roots can lead to serious health consequences. Possible paralysis of the lower limbs, impaired functioning of the pelvic organs. Therefore, you need to treat a hernia as early as possible. Especially now there are a lot of modern methods that quickly facilitate the patient's condition. 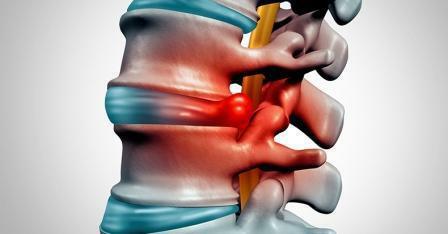 Treatment of a hernia of the lumbosacral spine

In the initial stages, this disease is easily treated by conservative therapy. With the right approach and timely treatment, it is possible to restore the disk to its function and completely eliminate the hernia. But this requires an integrated approach. Necessarily prescribed therapeutic gymnastics, massage, physiotherapy procedures. But often this treatment can not begin because of severe pain. Therefore, first you need to remove the pain. Often, this is sufficient anesthetics and local therapy with ointments.

But there are such strong pains that nothing helps. To be able to proceed to further treatment, injections are applied in hernia of the lumbar spine. They relieve pain in a few days, which allows continuing treatment.

Why injections are more effective

Treatment of a hernia of the lumbosacral spine should be aimed at solving several problems. First of all - the removal of pain. This will help restore the mobility of the spine. In addition, it is necessary to remove inflammation and muscle spasm. It is for these reasons can be a violation of blood circulation and infringement of nerve roots. And spasmodic muscles often do not allow the disc to take the right shape. And the last thing, which is also very important, is to restore the functions of the cartilaginous tissue of the disc. To do this, ensure normal blood supply and nutrition of cells.

All these goals can be solved with the help of medications. But taking them inside or outside is often ineffective. The best way to do this is with injections in the hernia of the lumbar spine. They ensure rapid delivery of the drug directly to the affected area. After all, the medicine is injected directly into the blood or even into the nerve root region. Injection treatment provides such results: 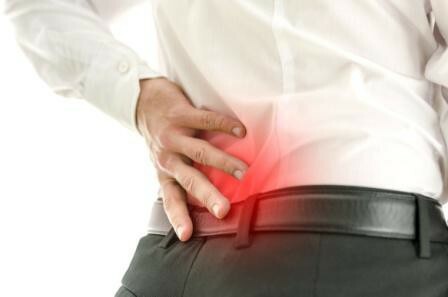 Types of pricking with hernia

All treatment for this disease should be prescribed by a doctor after examination and determining the stage of pathology and individual characteristics of the body. Sometimes it is possible to manage only external means and medical gymnastics. But very often you need injections with a hernia of the lumbar spine. The name of the medication may be familiar to patients, but it is not recommended to do the injections yourself without prescribing a doctor. After all, when choosing a medicine, many factors must be taken into account.

Several groups of drugs are prescribed for the treatment of a hernia. All of them perform their functions and are selected depending on the condition of the patient. Drugs can be used alone or as part of complex therapy. What are the injections for a hernia of the lumbar spine? 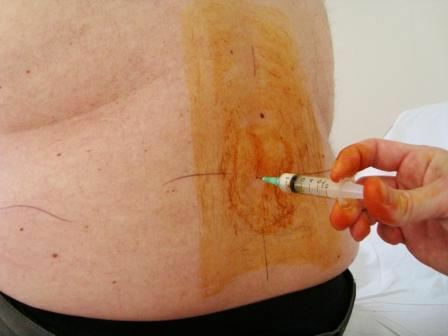 What is the blockade of

Most often, injections with a hernia of the lumbar spine are done intramuscularly or in emergency cases - intravenously. But sometimes blockades are applied-the introduction of the drug directly into the painful area. Blockade is a rather complicated method of injections, therefore it should only be performed by a specialist. If the needle is inserted incorrectly, it can damage the nerves and worsen the patient's condition.

There are two types of blockades. This is a paravertebral block, in which the injection is done between the ribs. In this case, the drug is delivered directly to the injured nerve. But most often an epidural block is used, in which the drug is injected into the focus of pain between the shell of the spinal cord and the periosteum. This method of injection requires anesthesia, so it is done only in a medical facility.

For blockades, anesthetics are used, for example, Novocain or Lidocaine, steroid hormones, such as Dexamethasone, and a combination of NSAIDs with vitamin B1.

These drugs are prescribed for hernia most often. They effectively relieve pain, inflammation and swelling, and side effects are rare. The advantage of these drugs is that they are inexpensive, so they are available to every patient. For example, the price of "Diclofenac" in ampoules is only 60 rubles for 5 pieces. Buy this drug in any pharmacy, it is very effective in hernia and causes the least side effects.

All non-steroidal anti-inflammatory drugs should be prescribed by a physician. After all, they can have contraindications. In addition, there are several generations of drugs that have different efficiencies. What are the most commonly prescribed drugs in injections? 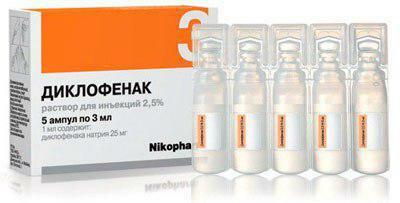 In case of emergency, with very severe pain, and after the course of NSAIDs, if it does not have the desired effect, steroid hormones are used. They also have analgesic and anti-inflammatory effects, but more powerful. Such drugs can be used no more than 5 days. Their negative effects include the adaptation of the organism to their action, as well as the destructive effect on cartilage tissue with prolonged use.

Most often used in the hernia of the lumbar spine "Dexamethasone", "Prednisolone" or "Diprospan".But you can not use them for treatment. Contraindicated glucocorticoids in gastric ulcer, diabetes, tuberculosis. Because of the large number of side effects such drugs are prescribed only in extreme cases, with a complicated form of the disease. 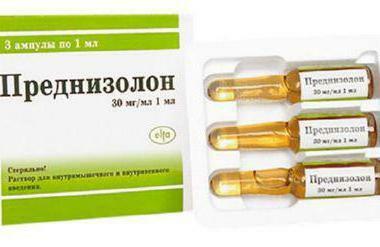 Severe pain caused by protrusion of the intervertebral disc causes spasm of the muscles surrounding the spine. This spasm still intensifies the pain, because it keeps the vertebrae pressed against each other and prevents the disc from returning to its place. Therefore, muscle relaxants in injections are often used to reduce pain. These are drugs that help to relax the muscles and improve blood circulation in tissues.

The most commonly used drug is "Midokalm".It can be used together with NSAIDs. It rarely causes side effects, but it can not be used in cases of impaired renal function, ulcers and nervous disorders. Similar effect is also available drugs "Sirdalud", "Baclofen", "Tizanidine", "Ditilin." 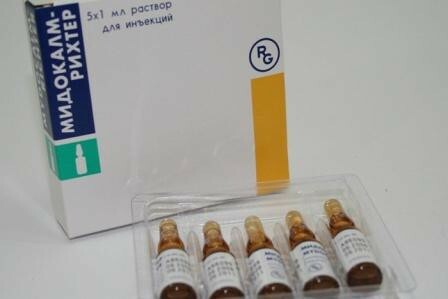 After removal of pains for restoration of cartilaginous tissue with hernia, application of chondroprotectors is indicated. These drugs should be used for a long time, but they can damage the mucosa of the gastrointestinal tract. Therefore, sometimes such drugs are administered intramuscularly. Most often in the form of injections use "Hondrohard."This drug slows the processes of destruction of intervertebral discs and stimulates the restoration of cartilaginous tissue. In addition, such drugs are used: Dona, Alflutop, Rumalon, Elbona and others. 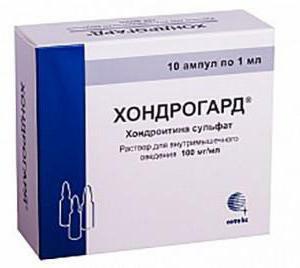 With a hernia it is necessary to use vitamins of group B. They strengthen the defenses of the organism and especially favorably affect the musculoskeletal system. The complex preparation "Milgamma" possesses high efficiency. When used in complex treatment, it accelerates the disappearance of pain.

Trigamma is also often used. The injections of this remedy reduce painful sensations due to the presence of lidocaine in the composition. A vitamin B group helps to remove inflammation, improve metabolism, accelerate the recovery of nervous and cartilaginous tissue. 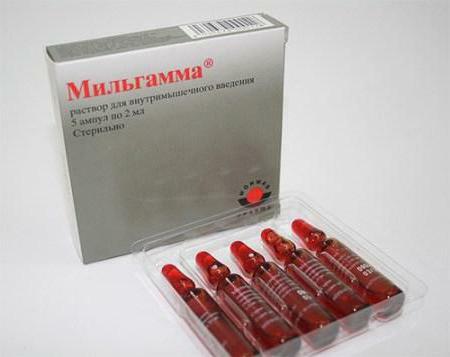 Use of a dropper with a hernia

Sometimes the drugs are not injected intramuscularly or intravenously, but drip. Such a method ensures a constant supply of the drug and the maintenance in the blood of its desired concentration. Most often, droppers are used in emergency cases for the purpose of anesthesia. For this, such drugs can be used:

If you have pain in your back, you should contact the medical institution as early as possible. Self-treatment with a hernia is unacceptable.