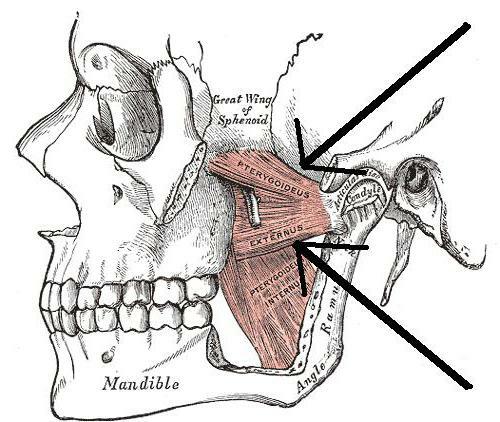 Chewing muscles are much less than, for example, mimic. First of all 4. However, they perform the most important functions, including ensuring the preservation of the "youth angle".These include muscles:

All these elements form a single structure. If one of them is shortened or deformed, the others are affected.

It has two heads. They are separated by its own connective membrane( fascia). The lateral pterygoid muscle begins from the bone of the at the base of the skull. In this case, the beams depart from different points. The narrower( upper) protrudes from the transverse region of the large wing in the sphenoid bone, as well as from the trailing crest. A wider( lower) beam emerges from the side. It starts from the pterygoid lateral plate in the sphenoid bone. Fibers are combined when the anchoring point is reached. 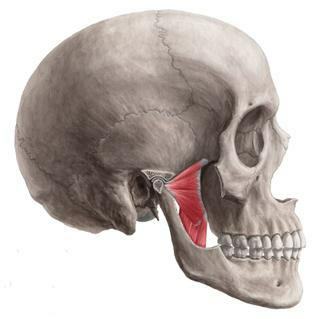 It should be said that this element of the musculature has various connections with other facial structures. If the atheroid pterygoid muscle begins to malfunction or is deformed, it may affect the activities of other systems. Dysfunction of this element can cause the development of a variety of symptoms and disorders, up to the loss of hearing. The lateral pterygoid muscle provides the extension of the jaw. This is achieved by simultaneous contraction of the beams on the right and left. If lateral pterygoid muscle is involved only on one side, the jaw moves in the opposite direction. For example, if the right bundle is shortened, it moves to the left, and vice versa. 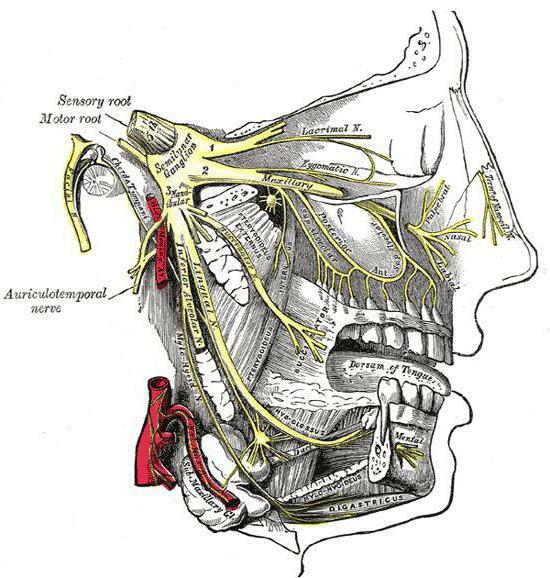 This muscle is represented in the form of a quadrangle. It acts as an important element of the mandibular ligament. The muscle is located on the inner surface of the bone, opposite the chewing, in the same direction as the bone. In some cases, their bundles are connected. The element is fixed with the help of thick shoots. There are only two. The larger one is attached to the pterygoid lateral part in the sphenoid bone, the smaller is attached to the pyramidal process in the palatine part and the hillock on the upper jaw. At the bottom, the muscle is also fixed at two points. Between the processes, many important structures are formed. Among them, nerves, alveolar, maxillary vessels. The medial element, as well as the lateral pterygoid muscle , provides the movement of the lower jaw. When cutting from both sides, the bone moves forward and upward, on one side - into the side.

This muscle is located on the pterygoid( medial and lateral).She is strong enough, because she trains more often during chewing. Its contours are sufficiently well probed, especially when it is in a reduced state. The muscle is fixed on the zygomatic arch. It is quite complex. Muscle fibers are divided into deep and superficial parts. The latter departs from the middle and anterior parts of the zygomatic arch. The deep part is attached a little further. It departs from the back and middle parts of the arc. The surface element passes at an angle back and down. At the same time he covers a part located deep. 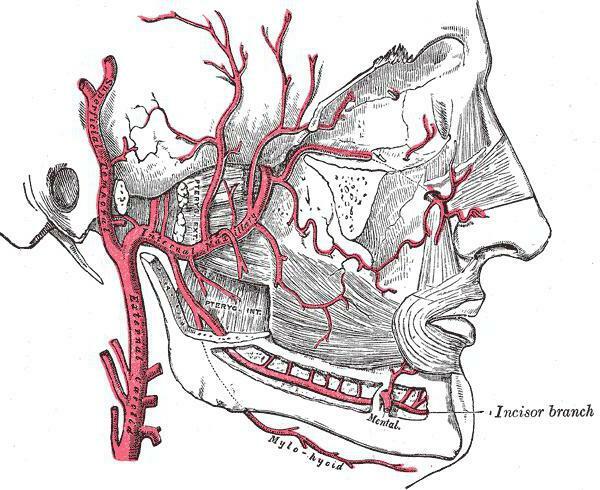 This muscle departs immediately from the three bones. The temporal element occupies almost 1/3 of the surface of the skull. In its shape, the muscle resembles a fan. The fibers are directed downwards and pass into a rather powerful tendon. It is fixed on the coronoid process of the lower jaw. This muscle provides biting movements. In addition, it pulls the lower jaw forward, and also raises it until it closes from the upper jaw. The temporal jaw is not distinguished by pronounced relief. However, it directly participates in the formation of "hollow temples".With weight loss or frequent nervous loads, the muscle takes a more subtle and flat shape. The temporal line and the zygomatic arch thus acquire a relief. It is in this case that the face looks drained. With dysfunction or spasm it is very difficult to detect changes in it.