Many of the school biology lessons remember that hereditary information transmitted from the father and mother to their children is in the human genome, consisting of 23 pairs of chromosomes. They contain about 28 thousand genes, each of which plays its most important role in the formation of the human body. Mutational changes of only one of them can provoke Cornelia de Lange syndrome, very unpleasant, and in most cases a fairly serious illness, often leading to death. Many authors claim that those who suffer from this syndrome have no chance. And yet, do not despair, because modern science and medicine are doing real miracles.

Etymology of the name

The Cornelia de Lange syndrome was so named in honor of its described child physician named Cornelia de Lange, who lived and worked in the Netherlands in the 1930s. She in her practice observed 5 such cases, the last time just two girls who were not relatives. In 1933 Cornelia made a detailed description and conclusion of her observations. But much earlier( in 1916) the same disease was diagnosed and described in detail by the German physician W. Brahman, therefore the name Brahman-Lange syndrome is often used. In addition, the name Amsterdam syndrome occurs, since in this city there are at once three children who have found such a pathology. All three names are the same disease. It is found on all continents, in people of all races and ethnic groups, with the same frequency in both boys and girls. For nearly a hundred years, since the first description, about 400 cases of this pathology have been studied in detail. 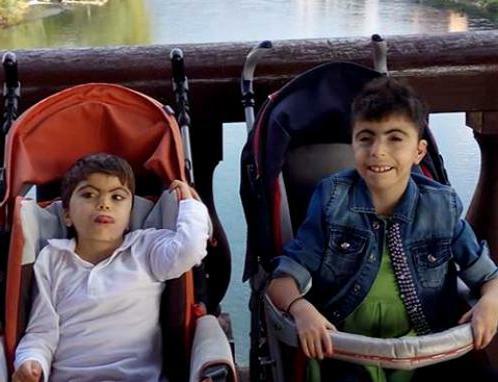 Cornelia de Lange syndrome can be suspected from the first minutes of a baby's life. Primary symptoms:

- microcephaly( skull approximately 10% less than normal( in 98% of patients),

- brachycephaly( increase in transverse size( width) of the skull in comparison with its longitudinal dimensions),

- reduction of the cerebral part of the head.

The skin of about 2/3 of babies has a cyanotic pattern with well-seen vessels( marbling of the skin), but this symptom is not determinative in the diagnosis of this disease.face defects

Defects on the face of the newborn are the most vivid criteria to diagnose Cornelia De Lange syndrome. The photos of the baby above show this clearly. Disces from common standards include:

- clearly outlined, like drawn eyebrows converging on the bridge of the nose( 99% of cases)

- small spout, on which the nostrils protrude forward( 88%);

- an unusually large distance between the nose and lips;

- underdevelopment( hypoplasia) of the lower jaw( 84%);

Above mentioned deviations on the face of a newborn can be present all, but only some. 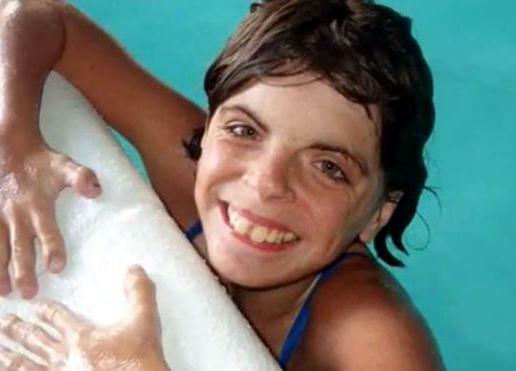 Hypoplasia( underdevelopment) and pathological disturbances in the formation of internal organs pose the greatest danger to the lives of children who have Cornelia de Lange syndrome. Diagnostics includes MRI, X-ray, ultrasound, rhinoscopy, cytogenetic analyzes and other modern methods.

In this disease, there may be:

- atresia of the khoan, or, more simply, obstruction of the nasal cavity( this pathology is completely unrelated to the de Lange syndrome and is easily diagnosed by the way a baby breathes or with a probe);

- defects in the structure of the heart( vascular defects, valves, partitions);

- gastrointestinal tract defects( the caecum is mobile, some others);

- defects of the genitourinary system( approximately in 50% of patients);

- too high or with cleft palate;

Again, it is not necessary that one of the child's children present all of the above defects of the internal organs. 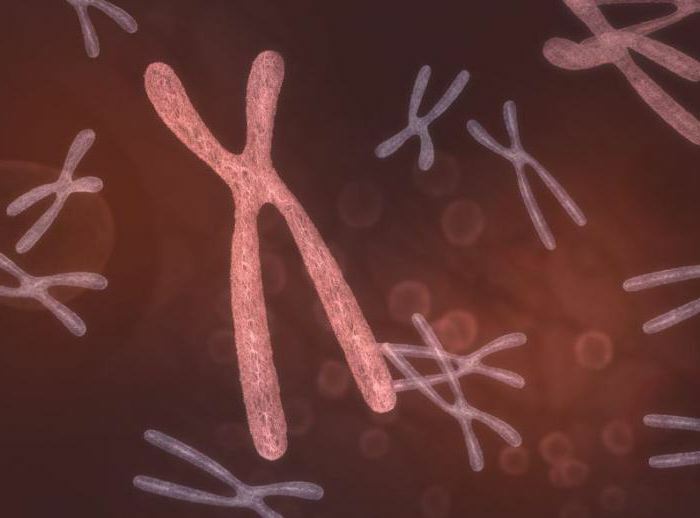 Newborns may have limb, spine, and thoracic defects, which also diagnose Cornelia De Lange syndrome( photos of people with this disease are presented in the article).

Some defects are visible immediately. It:

- absence of one or more fingers on hands;

- deformed spine and / or thorax.

With the child growing up, the following deviations become quite significant:

- lag in growth( in some cases, nanism);

- a limitation in the ability of the elbow joints to bend-unbend( contracture).

Neurological abnormalities and pathologies of the senses

Unfortunately, there are many other problems in children diagnosed with Cornelia de Lange syndrome. Symptoms of the disease associated with the neurological condition of the child may be as follows:

- muscle hypotension( muscle tone is lowered, there is no strength in the arms and legs);

- the periodic occurrence of seizures.

Children with Lange's syndrome have problems with hearing, sight and speech. Many of them speak poorly or hardly speak at any age. Parents note that in most cases, the kids express their desires with gestures. With vision they have such problems:

- atrophy of the optic nerve. 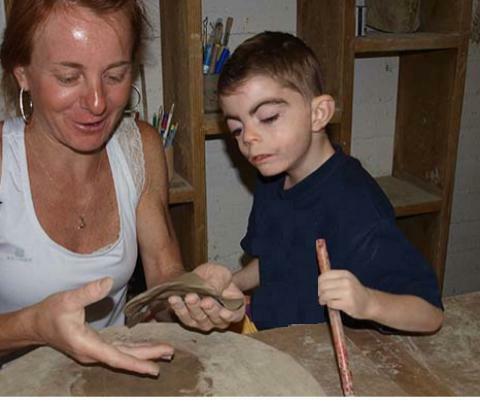 Cornelia de Lange syndrome, in addition to all other complications with health, causes mental retardation, which is noted in almost every sick child, and in 80% of cases, imbecility or debility is diagnosed. However, there are children with the de Lange syndrome who attend ordinary pre-school and school facilities. It depends on which of the two forms the disease is diagnosed. The first is called classical, in which there are many deviations in the formation and operation of internal organs, external anomalies and pronounced retardation of mental development. The second form is conditionally called smeared. With it, there are some external deviations, there are some problems with internal organs, but intellectual development has a border delay.

As parents point out, children with the de Lange syndrome at any age do not ask to go to the toilet, are often prone to irritation, like to perform various actions unusual to healthy children: constantly tearing paper, eating it, breaking everything that gets in their hands,circle. Such actions of children as if soothe them.

It's been almost a hundred years since the first time Cornelia de Lange syndrome was described. During this time, the causes of the disease were found out. They are mutations in the genes. The greatest number of cases was recorded with mutations in the 5th chromosome, more precisely in the NIPBL gene located in its shoulder "p".A small percentage of the Lange syndrome is recorded in people with a mutation of the chromosome 1A protein( called the SMC1A gene), and one case is noted with a mutation also in the chromosomal protein called the SMC3 gene. However, the causes that cause these gene mutations are still in the stage of theories and assumptions. 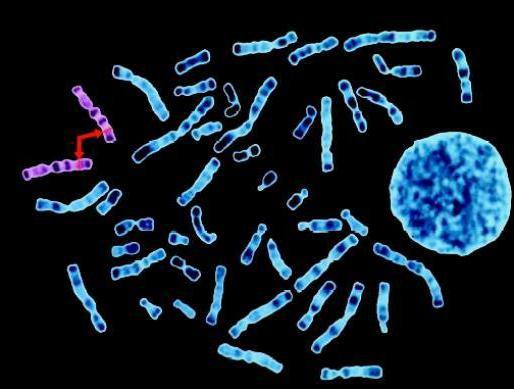 There is an opinion that they can be caused by infectious diseases of the pregnant woman, especially in the first trimester, some medicines, the advanced age of the child's father or the age of parturient women older than 35, and marriages between relatives.

But none of the above reasons is not certain and 100% causing genetic changes.

Another hypothesis is that the syndrome of Cornelia de Lange is inherited, but more than half of the patients examined this disease arose sporadically, for the first time in the family.

It is believed that this disease is very rare. Single data, with what frequency it occurs, no. Some sources claim that one child falls on 10,000 newborns, others that one per 100,000, while others call different numbers in this range. If you think about it, it's not so little. According to statistics, about 370 thousand babies are born on earth every day. That is, if you take even the lowest rates, every day about 4 people are born who are diagnosed with Cornelia de Lange syndrome.

How many such people live, depends on many factors, determining which are the degree of anomalies of internal organs, their timely detection and the quality of the medical effects. If a child has pathologies of internal organs incompatible with life, he dies in the first month after birth. If the anomalies of internal organs are insignificant or the child was surgically interrupted in time, the life span may be long enough. Complicating the forecast is the fact that the body of patients with the de Lange syndrome is not able to resist the usual diseases, for example, viral diseases, and it is more difficult to fight them. 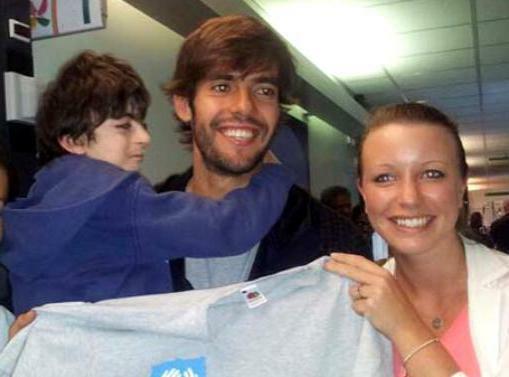 Most authors and sources claim that there is no way to cure a child who has Cornelia de Lange syndrome diagnosed. Treatment is reduced to surgical operations( if there are indications), the intake of vitamins, nootropics( affect brain function), anabolic drugs, sedation. However, in our time, the highest technology can, if not completely defeat the disease, then significantly reduce its manifestation. For this we need faith in success, inhuman patience and money, because treatment is expensive. Here are the contacts of clinics and centers where they are going to help:

In children diagnosed with Cornelia de Lange syndrome, life expectancy largely depends on the self-sacrificing care of their loved ones, as almost every minute is needed to deal with such patients. Very often the positive results achieved are reduced or reduced to zero if treatment is discontinued or simply because a relapse occurs.

According to the parents, positive results in the treatment of their children give kinesitherapy, special rehabilitation programs for swimming with dolphins in the dolphinarium, biorhythm correction, aromatherapy, music classes, light therapy.

It is difficult to talk about preventive measures of the disease, the causes of which are not known to anyone. Given the factors that can cause mutations at the genetic level, one can advise:

- to prevent the conception of children from blood relatives;

- be wary of late motherhood and paternity;

- during pregnancy, especially in the first months, take all measures to avoid viral infections, and in case of illness take medication only after consulting a doctor.