How many amazing places there are in our country, which are worth a visit! This Altai, Buryatia, Central Russia, the Volga region, etc. Judging by the reviews of travelers, these regions are famous not only for their excellent nature, but also for places, the existence of which is not even known to all locals. The Ulyanovsk region, the territory of which is stretched along the Middle Volga, judging from the documents, was inhabited a hundred thousand years ago. That's why many tourists come here every year to get acquainted with local sights, keep fragments of eternity, listen to unique legends and legends, to feel the local original atmosphere.

Here it is necessary to look at the Simbirsk mountain, around which many mysterious stories are stacked, to visit the ancient Lutheran church of St. Mary, to visit the territory of the ancient Bulgarian state, where today is located. Undory. This is practically the border with Tatarstan. It is here that ancient settlements and ancient settlements of the Bulgars are located."Ten medicines" - this is how the name of the village of Undory( Ulyanovsk region) is translated from Tatar. Ulyanovsk region is famous for its healing springs, water from which our ancestors were treated. 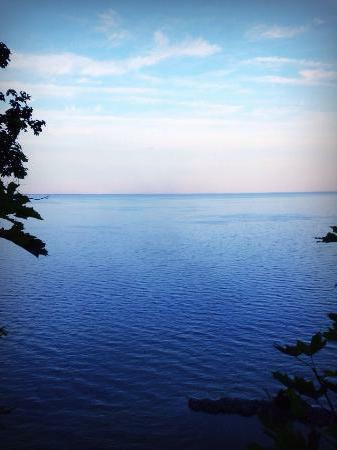 It is located forty kilometers to the north of Ulyanovsk on the shore of the Kuibyshev reservoir. The village of Undory is large enough, but it is famous primarily for its sources. As a result of laboratory studies, they found more than twenty useful trace elements. Apparently, therefore, the mineral water "Volzhanka", which is produced here, is considered unique in its qualities. More than thirty years ago, back in the Soviet years, the area around the village of Undora with an area of ​​seven and a half thousand hectares was recognized as a resort area.

Many of them are famous not only for the whole of Russia, but also beyond its borders. First of all, those who require treatment with mineral water come here to rest.

Sanatoriums of the Ulyanovsk region, in particular those located in the resort area near the village of Undory, receive patients suffering from skin ailments, chronic pathologies of the digestive system, as well as the ear, throat, nose. For example, in the health institution of. Lenin use complex therapy, which is based on the use of unique in nature and medicinal qualities of mineral water. Its analogues are only in Karlovy Vary in the Czech Republic and in Ukrainian Truskavets. Another balneological health resort in the Ulyanovsk region is the sanatorium "Dubki"( Undory). 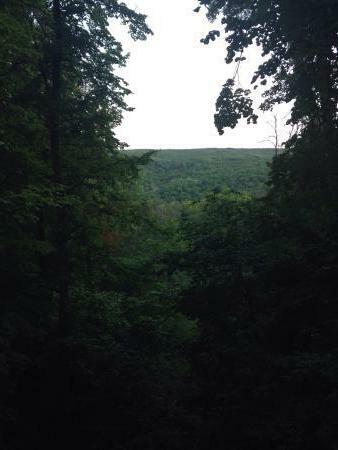 Amazing gift of nature is the climate of the resort zone of the Ulyanovsk region. It is similar to the sea because of the proximity of the Volga River. In addition, the sanatorium "Dubki" offers such preventive and therapeutic services, the level of which is quite commensurate with some resorts of world importance.

A dense mixed forest, a picturesque area worthy of being photographed by tourists, it is here that the buildings of this health resort are located. Sanatorium "Dubki", built in the resort of Undory, is located on the Volga Upland. It is surrounded by mountains, entirely covered with forest. But the main therapeutic factor of this sanatorium is the local mineral water. It is used here for the treatment of patients who are diagnosed with gastroenterological and urological pathologies. Procedures are carried out as a method of taking water inside, and by inhalation and intestinal irrigation methods.

Sanatorium "Dubki" is designed for three hundred and two places. It has several two- and three-story buildings, which are equipped with rooms of categories standard, luxury, studio. There is also the possibility of accommodation in one of the three fishing lodges. The buildings are interconnected by a medical unit, as well as a dining room and a drinking gallery. Fishing lodges are designed for six people. They have their own kitchen and BBQ. 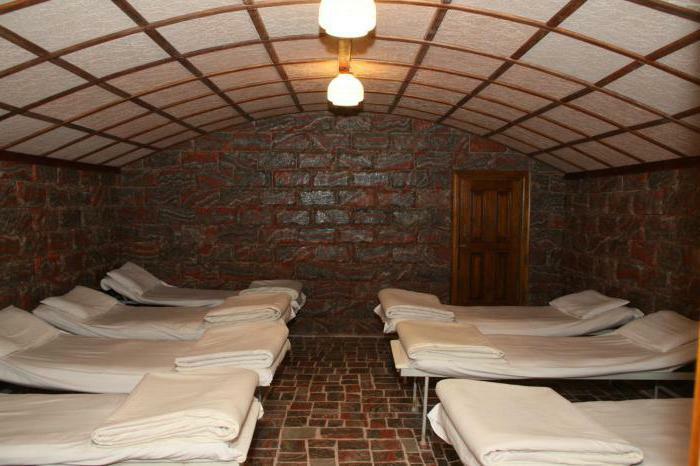 All rooms, regardless of the level of comfort, have all the necessary for a normal residence set of furniture, as well as a TV, an electric kettle, a refrigerator. The apartment also has a microwave oven, there is a separate kitchen area. All rooms have split systems. Cleaning is done daily, except on Sundays. Sanitary facilities in the sanatorium are combined. They have shower cabins installed. In the deluxe rooms and the studio, guests are also provided with slippers and bathrobes.

The cost of a voucher to this health facility includes a room, as well as three meals a day and medical treatment according to a medical indication."Dubki" is a sanatorium, the price for accommodation in which in high season varies from one thousand nine hundred to six thousand rubles per day per person, depending on the level of accommodation.

For example, for a double room of the category standard with the maximum number of living 2 + 1 will have to pay two and a half thousand for one vacationer. In turn, single accommodation will cost more. The studio costs about five and a half thousand rubles, and the two-room double suite - 5000. 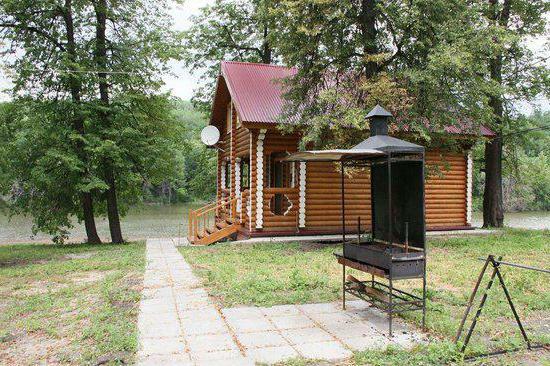 Sanatorium "Dubki" is considered one of the eighteen unique health resorts in Russia. Only here is the treatment with sodium chloride brines, enriched with bromine and iodine, Kimmeridgian blue clay from the nearest deposit, mud, climatic and kumysotherapy.

Doctors refer to urological, gynecological, gastroenterological, as well as diseases of the respiratory system, gastrointestinal tract, cardiovascular system and musculoskeletal system as the main indications for referral to the sanatorium "Dubki".Patients can be consulted by certified specialists, three of whom are doctors of science.

The sanatorium offers not only numerous procedures, of which there are more than one hundred and fifty titles, but also programs aimed at maintaining the holiday-makers in their tonus.

It is provided three times a day, according to the concept of a customized menu. Professionalism of service, pleasant atmosphere in the dining room, delicious dishes, a lot of Russian national drinks, pastries, berries and fruits - these are the services offered in "Dubki".For those who need it, a personal menu prepared by a dietician can also be offered. 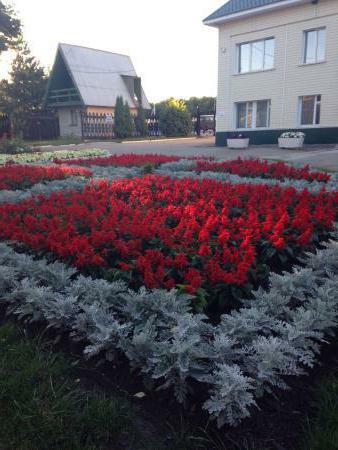 Solarium, indoor pool, filled with mineral water, billiards, beauty salon, hairdresser, manicure room - all this is included in the infrastructure of this sanatorium. There is also a heated sports hall, where you can play basketball or volleyball, tennis. On the bank of the Volga there is a boat base where you can rent a catamaran.

At the disposal of the sanatorium "Dubki", which operates all year round, there is an excellent ski base with two mountain routes of different levels of complexity, in the near future it is planned to create all conditions for fans of snowboarding. The resorts of Undory are equipped with a modern complex for snowmaking and lighting. There is a lift between the levels.

On the territory of the sanatorium there is also a cafe-bar, a library with a book fund of more than two thousand copies, as well as subscription periodicals. In the pool, medical aqua aerobics are held, groups are collected according to the type of disease.

There is also a sauna for guests. For those who come by car, there is parking. In the evenings, for tourists, music and game programs are organized, several times a week - dancing evenings. The sanatorium has its own farm, as well as a stable where people can ride horses. Experienced instructors help to master riding skills. 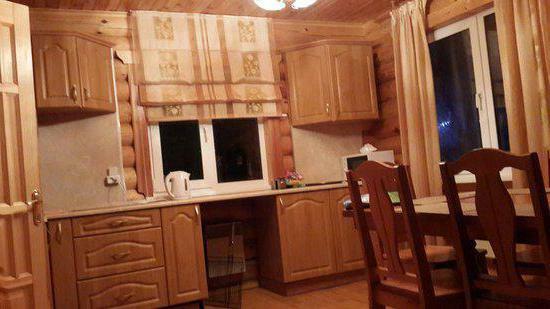 Many of those who ventured to change their favorite foreign resorts to this sanatorium, in general were satisfied with their choice. The amazing nature, own subsidiary farming of the sanatorium, apiary and dairy production - such a healthy diet, which is difficult to find today, is one of the advantages in favor of Dubkov.

Good work of the staff, professional treatment, cozy atmosphere, delicious food, a varied menu and, importantly, reasonable prices - this is how those who have already visited this facility say about this health facility. The treatment can be combined with sightseeing of local attractions such as the St. Michael's Monastery, the Paleontological Museum, etc. Many people remember the night fishing on the Volga. Treatment for most holidaymakers really helped.

Among the minuses, some note a small number of free procedures, as well as a shortage of medical staff.

So, those who want to relax in silence and seclusion, have a home-like delicious and varied food, do not stand in lines at the treatment rooms, and personally feel the care of doctors and nurses, of course, it is worth to go to the sanatorium "Dubki".