Laparoscopy and hysteroscopy: indications, reviews, which is better

Today, modern medicine and the latest technology can eliminate numerous problems that arise in the female body. Particular attention is paid to the reproductive system. Those representatives of the weaker sex who decades ago despaired of having a baby, now can bear and give birth to a baby. The breakthrough in gynecology was two procedures - laparoscopy and hysteroscopy. They can be performed simultaneously or sequentially. Also these manipulations are independent of each other. Laparoscopy of the uterus is very different in technique from hysteroscopy. It is about these two procedures that will be discussed later. 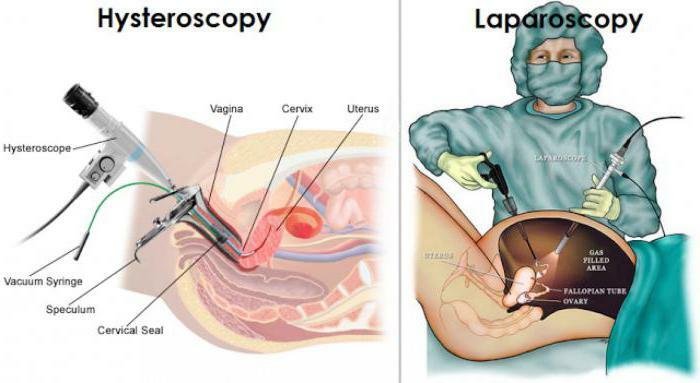 From the article you will learn how hysteroscopy differs from laparoscopy. We will also talk about the main indications for manipulation. Separately, it is worth mentioning about the responses of women and doctors.

Hysteroscopy is an operation that relates to minimally invasive interventions. It is conducted among women who have sex. Manipulation is carried out using a special device - a hysteroscope. During the study, the woman is in a state of sleep. Less commonly, local anesthesia is used. In this case, the patient hears everything, sees, but does not feel.

Hysteroscopy is an operation that is performed exclusively within the walls of a hospital. At the time of the procedure, the woman is on the gynecological chair. In the cavity of the cervical canal, an expander and a special tube with a sensor are inserted at the end of which there is a microchamber. The doctor can, with the help of this equipment, monitor the processes occurring inside the genital organ. Under pressure, the womb straightens, and a specialist can examine every inch of it. If necessary during the diagnosis, physicians can take a small piece of tissue for more thorough examination. Also, if a polyp is found, it can be removed immediately. The procedure allows to eliminate some abnormalities of the development of the uterus, for example, synechia. 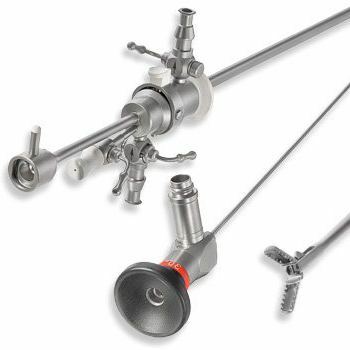 The procedure described has its own indications. There are two types of manipulation: diagnostic hysteroscopy, during which the genital organ is examined from the inside, and operative. In the second case, during the manipulation, the doctor performs surgical treatment. Most often, minimally invasive intervention is necessary for the following indications:

Before the procedure, a woman should definitely take tests. This includes a smear on the purity of the flora and analysis for infection, a blood test for hepatitis, syphilis and HIV.Also, additional diagnostics are performed before anesthesia is applied.

Consequences of using the hysteroscope

What are the testimonials about the study? This manipulation in a short time became so popular that now a diagnostic intervention is carried out almost every fourth female of the reproductive age. After the procedure a woman should stay under the care of doctors for a while. If necessary, she is administered antibacterial drugs and anesthetics. In the absence of surgery the patient can go home within a few hours. However, if the doctor performed treatment, then everything will depend on the individual characteristics of the body and the course of the procedure.

Patients report that, within a few days after hysteroscopy, minor blood discharge from the genital tract can be noted. Usually they end on their own and do not require the use of additional medications. Also, some patients feel discomfort and minor pain. Doctors do not recommend entering into sexual intercourse within two weeks after the manipulation.

The plus of hysteroscopy is that after it is carried out, the doctor can determine the cause of the problem with maximum accuracy and prescribe the right treatment. 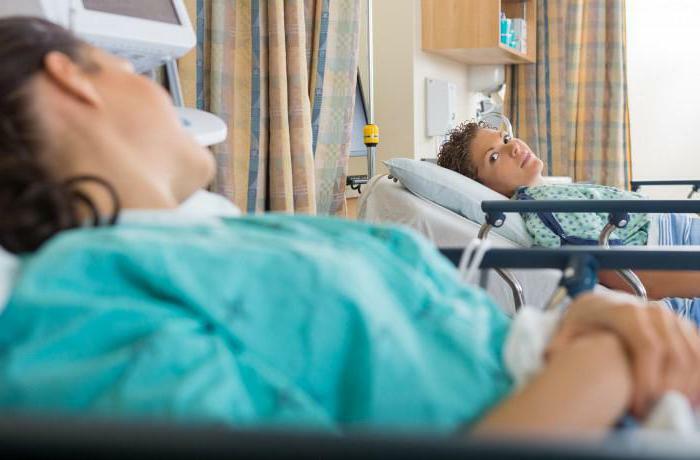 uterine laparoscopy is a study that is performed through the abdominal cavity. Manipulation is always performed with the help of anesthesia and a device for ventilation. Laparoscopy and hysteroscopy differ in that in the first case it is possible to speak about a surgical intervention, whereas the above-described study refers to minimally invasive.

During laparoscopy, a special complex device called a laparoscope is used. With the help of small incisions, the surgeon inserts tools into the woman's peritoneum. A camera is inserted in the navel area. It is she who sends to the screen everything that happens in the abdomen of the patient. Also, before the introduction of instruments, the abdominal cavity is filled with a special gas. The belly of a woman inflates, lifting the top wall. This is necessary to ensure that the review is maximum and there is no danger of damaging neighboring organs. Laparoscopy and hysteroscopy differ not only in the technique of interventions, but also in the duration of the operation. So, for laparoscopy it takes from 30 minutes to several hours. It all depends on the complexity of the operation. Hysteroscopy can be done in 10-20 minutes. 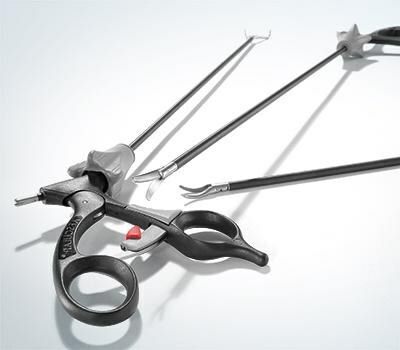 The manipulation can be planned and emergency. Laparoscopy can also be therapeutic and diagnostic. It is worth noting that in any case it is necessary to pre-examine a woman. To do this, blood and urine tests are taken, ultrasound of the genital organs is made, consultation of the therapist and cardiologist is obtained. Of course, if we are talking about the life of the patient, then all of these studies fall into the background. Doctors take all tests if possible. Indications for the study will be the following situations:

After carrying out laparoscopic intervention

According to women, after the operation, a restorative process takes place for a long time. First, within a few hours the patient departs from anesthesia. After that, a woman can get up on permission from a doctor. However, it is very difficult to do this. On the possibility of leaving the medical facility on the same day is out of the question. Usually hospitalization lasts from 3 to 7 days. Everything depends on the speed of recovery of the body.

After the procedure, the woman needs to remove the stitches. This should be done in 2 weeks. You also need to look after the scars and treat them with an antiseptic. Return to normal life and sports can not be earlier than a month. 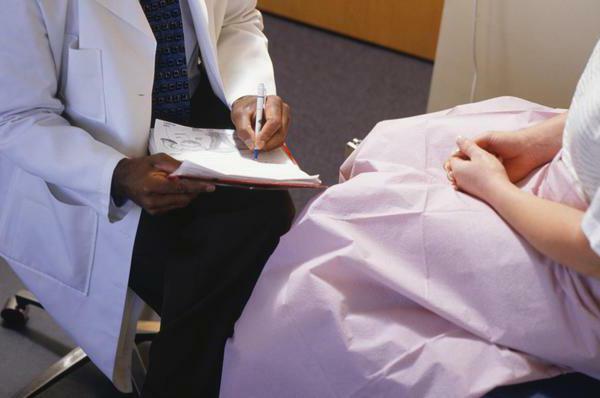 Hysteroscopy or laparoscopy: which is better?

This question often occurs in women. However, doctors can not unequivocally answer it. Laparoscopy and hysteroscopy are two completely different procedures. One can never replace another. For example, during hysteroscopy, a doctor can take a piece of the endometrium for analysis or remove the remains of the fetal egg from the uterus. With laparoscopy, such actions can not be carried out, since the instruments are in the peritoneum and do not enter the genital organ.

During laparoscopic surgery, it is possible to dissect spikes, remove the cyst from the ovary, and excise ectopic pregnancy. All these pathologies can not be eliminated with the help of a hysteroscope alone. That's why it will not be possible to say exactly which research is better. Laparoscopy and hysteroscopy are often performed simultaneously. It does not take several times to use anesthesia, and the doctor has a lot of opportunities to thoroughly study the problem and eliminate it.

Laparoscopy and hysteroscopy: reviews of patients

Women say that when you use the services of paid medical doctors, simultaneous carrying out these manipulations is much cheaper. If we are talking about government institutions, then there is a lot of pluses of one-time hysteroscopy and laparoscopy.

The representatives of the weaker sex say that during the above procedures( according to indications) and the addition in the form of conservative treatment, the effect is noticeable almost immediately. The cycle is restored, the disturbing symptoms disappear. Wishing to give birth to women with a good outcome of the operation can begin planning for pregnancy for the next cycle. 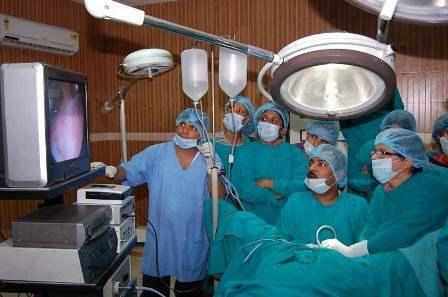 In modern gynecology, the concepts of "hysteroscopy" and "laparoscopy" are inextricably linked. Also during these and other studies, metrosalpingography can be conducted. This study of the condition of fallopian tubes in a woman. Often it is required for infertility and adhesions. For more information on interventions, contact your doctor. I wish you success!